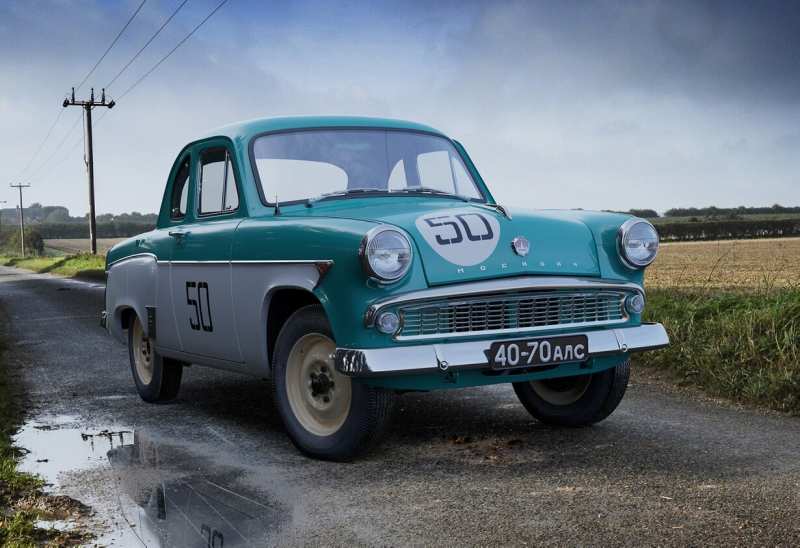 Thanks to the miraculous coincidences of circumstances, among the factory collections of a pair of rare cars, racing type “Moskvich – G5”. Not many people know about this moment in the history of the plant. The whole Moskvich model range .

The initial car for racing MZMA, abbreviated Moscow small car plant, was simple, popular for many drivers Moskvich-400, also known as the German Opel Cadet. Just on such cars, the drivers drove to the beginning of the trial competition of the USSR in the distant 51st year. Today, it can cause a slight irony, however, race drivers competed very seriously. 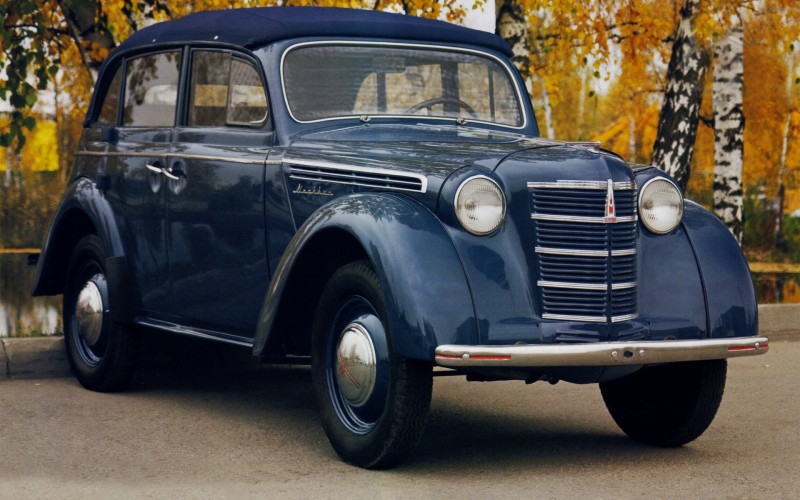 The engineering staff, having not such a huge treasury and opportunities, tried to make the machines much better. Not even one year passed, as the Moskvich experienced an innovative engine, a volume of 1.19 liters and an outstanding 34 hp. Funny Perhaps, however, the staff motor developed only 23 horsepower, and the 401st, after a light upgrade, was 26. The Moskvich-400 with 34 horses accelerated to 114.2 km / h, while the staff car reached 90 km. / h 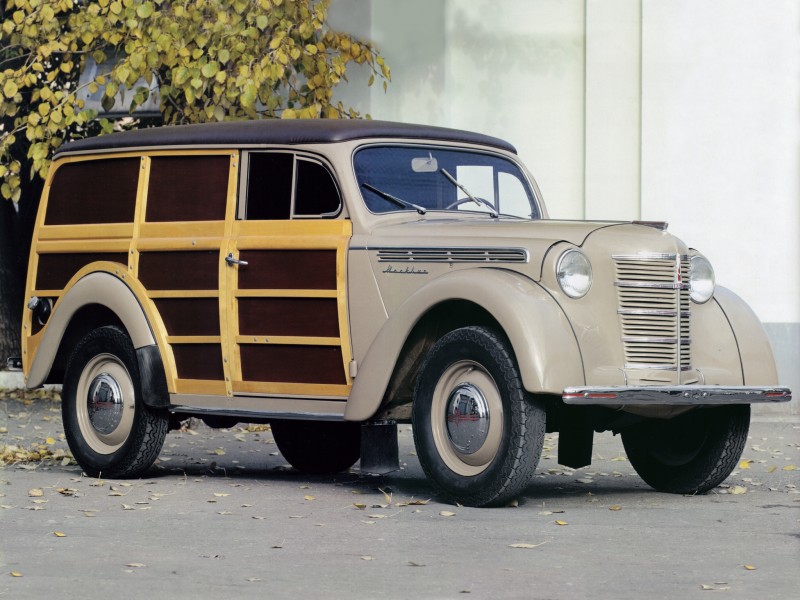 Already in the late 40s, a group of engineers and artists of MZMF was engaged in designing a modified Moscow car. Among other concepts with different appearance, they designed a couple of double cars. Such an idea came and inspired a capable engineer and a tireless organizer – I.A. Gladilin, who could not only invent something fresh and interest others with his ideas, but also deliver this particular idea to metal.

It was decided to install the power units, the volume of which was equal to 1.19 liters, but with 37 horses under the hood. All the rest decided to leave with Moskvich-400. The racer, Ipatenko, was able to win silver at a similar championship in the USSR championship. Frankly, his rival was still the same, the 400th. However, the creation of updated cars and competing with competitors and with unadapted tracks for auto racing, on which championships were held at that time, did not diminish from this fact.

Three years later, in the 54th, the Moskvich-404 Sport stepped onto the road. In an open car, such a kind of Russian Gran Turismo, the engine was designed as an experiment, designed by Okunev, which they planned to implement for a future production brand.

It is simpler to say, however trite it may sound, but Russian sports cars from the 1950s to the 1960s really were a testing ground for new engines, most of which went into mass production. In part, this could be justified by a small content of sports bureau funds, which would be enthusiastically produced much more powerful than a racing car. However, the problems they were forced to use parts from the serial line, only sometimes and slowly introducing new ones into them. 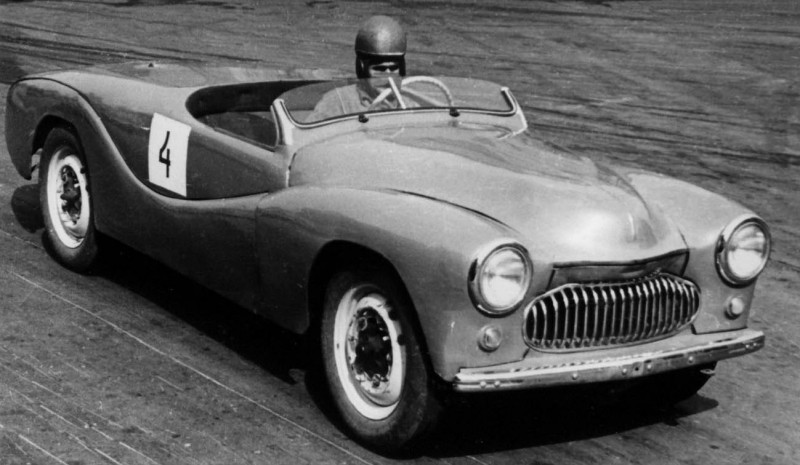 As a result, the engine with a volume of 1.1 liter for Moskvich-404 Sport was equipped with 4 carburetors from the IZH-49 motorcycle, which resulted in an increase in power to 58 horses. On this racing car, whose speed reached 147 km / h, the driver won silver in the first official race, and a year later – in the 55th – bronze. The champion title went to the car two years later.

Four more years passed and a fresh engine Moskvich-407 was installed in the version of a forced motor developing 70 hp on the same car. Accelerated now Moskvich to 156 km / h. After some time, the outdated Dubonnet front suspension from its receiver, Opel, was replaced with a triangular lever from the 407th model, and the wheels were lowered from 15 to 13 inches.

Later, a similar model appeared, the Moskvich-407 Coupe, which saw the track in the 1962nd year. The main goal that designers and engineers set for themselves is to minimize the mass of mass-produced cars as much as possible. The company decided to make a couple of dvuhdverok, taking from them almost everything that was really to eliminate, even the very lining of the interior. Guide lowered ground clearance and added to the rear suspension stabilizer. The mass of the car was only 860 kg. In the power issue, they installed a 1.36-liter, four-carburetor engine, which develops 75 horsepower and accelerates a sports car to 150 km / h. 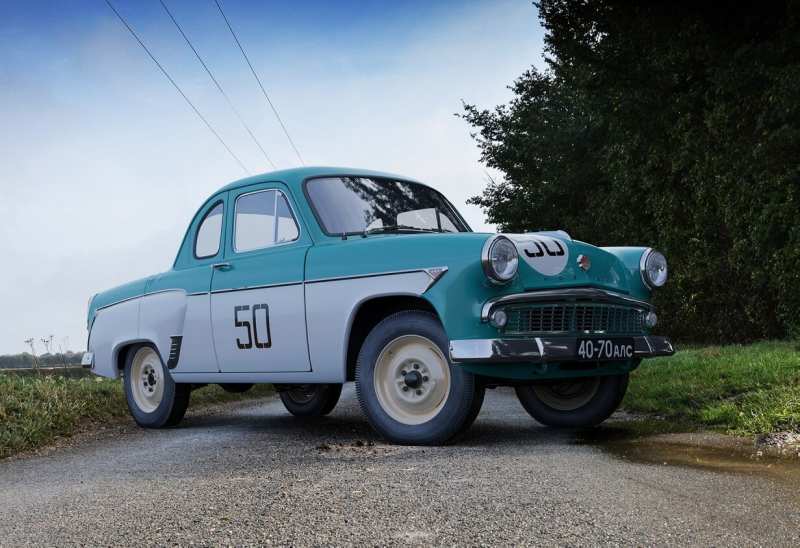 1962, allowed to win bronze at the 407th mark. After some time, a new engine, the Moskvich-408, with a pair of Weber carburetors, was installed on one car, increasing the strength to 81 horses. Cars drove onto the track until the 65th year, but the iconic victories were no longer given to drivers. Despite this, the production of Moscow for more than one year built racing cars of the formula unit.

In the second part of the 50s, the golden age of the Russian auto industry got its start. The number of championships and curiosity, which constantly grew towards them, was justified. A considerable number of their own designers, car bases, taxi companies created various tasteless and attractive cars. Production of small cars did not lag behind.

The most initial Moskvich-G1, racing class with wheels of open type was designed in the 55th. The machine, on which Gladilin and Okunev worked, was a spatial frame, using pipes from steel, and covered with aluminum panels. The car was with the rear location of the power unit, although the authoritative models of those times tended more towards the classical arrangement.

Suspension and braking system from Moskvich-401 on the G1 model were regular, but for the first time in the Soviet Union decided to create a pair of independent brake circuits for the front and rear axle. The test 1.09l four-carburetor engine produced initially 70, and later 75 horsepower. The maximum speed was a huge number for those times – 200 km / h. 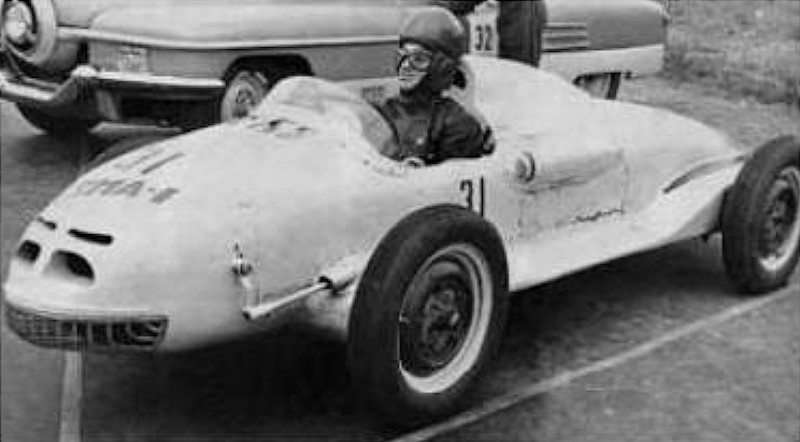 In the 56th year, it was decided to create a body with covered wheels, and two years later, the plant returned to normal. To tell the truth, Moskvich-G1 did not achieve great success in competitions. Only in 1960, the Veretov, on models with 70 hp. Moskvich-407 took 4th place in the race for the championship.

However, in the 56th, designed a record-racing car – Moskvich-G2. This option was close to the structure of the younger brother – G1 with a streamlined surface and covered wheels, as well as with a motor of 75 hp. and a volume of 1.09 liters. The mass was only 585 kg. When the car was used for records, a cap was installed on it that covered the driver’s head. For example, Chvirov set a record for G2 from the start from the spot. He dispersed the model to 223 km / h. 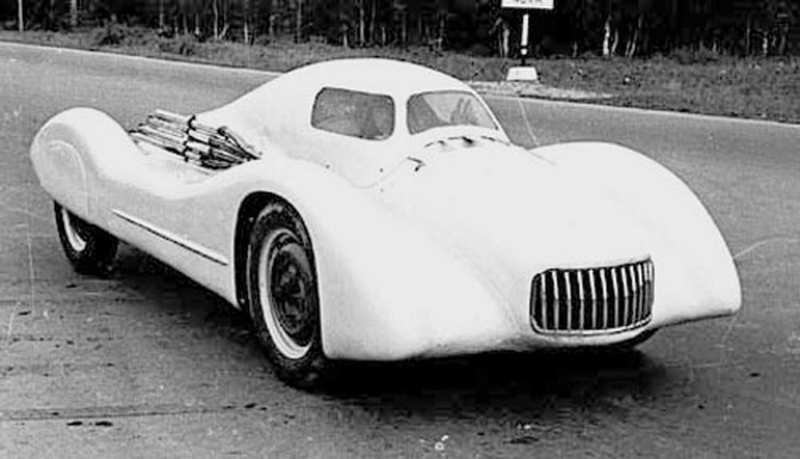 Three more years passed and the Moskvich-407 unit was installed on this brand. On it, Veretov managed to win an important competition of the year, but unfortunately, at that time she did not acquire the status of a champion. In the spring of ’61, the debut and unique Moskvich of formula type, with the front location of the power unit, were taken to the track for the first time. The brand was called -G3 and worked on its creation Gladilin and Shugurov.

In order to lower the driver’s landing, the engine was lowered and the cardan located to the right of the seat was lowered. Three space frames were prepared, but only one was released. As early as next year, an engine with 76 hp was installed under the hood, and the wheels were fitted with 13-inch wheels. Racing cars reached 170 km / h and Chvirov won first place in the USSR competition, and in the 62nd he received silver. 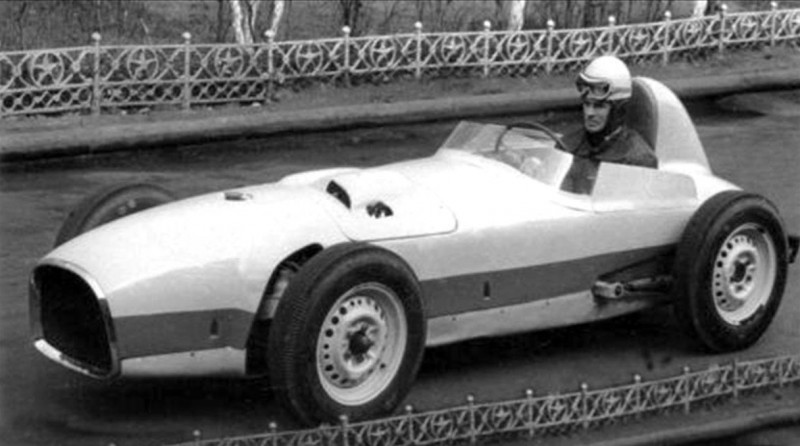 It is worth noting that the rivalry on the Russian race tracks at that time was serious. In the 63rd, the engineering staff of MZMA returned to the location of the power unit from behind and released the third generation Moskvich-G4, which according to the documents passed as a Junior. It was the debut mark with independent suspension and where used steering rack.

On the first G4 there was already known 76-strong engine. The 65th year was marked by the release of the new 408 engine with a pair of Weber carburetors, where the camshaft and exhaust system were changed. Now the power was 81 horses. New acquired name G4A. Moreover, the following year, the G5M came out – an improved engine Moskvich-412, which was already forced to 92 horses. 69 year gave as much as 100 hp, and the new name of the engine – 412-2V with a pair of camshafts and five-speed gearbox, which was actively tested. On such cars, the 4th generation, the racers won 3 gold, 3 silver and a pair of bronze medals of the USSR. 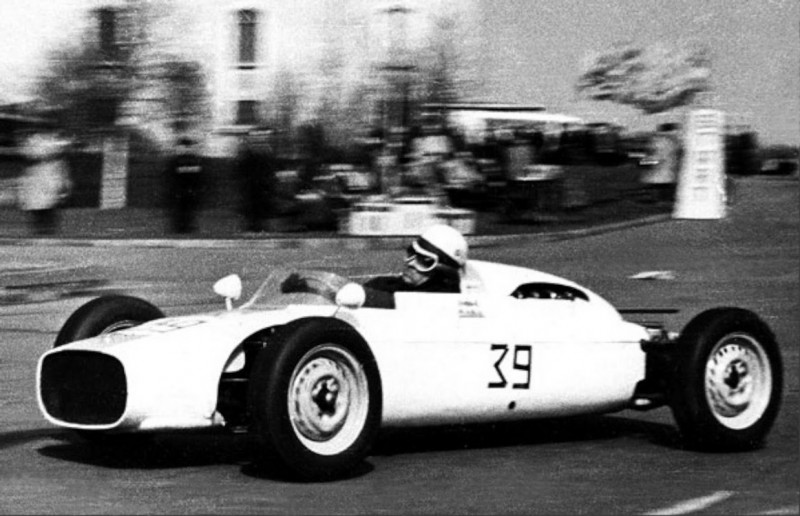 In the end, thanks to the development of the 4th generation, a pair of Muscovites-G5 were released, which were similar in design to the G4, but improved, separately in the gearbox, which shifted behind the rear axle and installing all-wheel disc brakes. Starting 68 and ending with 75, the G5 was equipped with power units from 92 to 124 hp, with a volume of 1.7 and 1.84 liters.

Moscow novelty accelerated to 210 km / h. In the 74th, both cars acquired a fiberglass body, instead of aluminum. G5 weighed 580 kg, and the past, using aluminum 600 – 610 kg. With the help of a new racing vehicle, 3 USSR championship medals were won, one silver medal and a pair of bronzes.

But with the advent of the seventh decade of the twentieth century, the desire to work with cars of the racing class gradually quenched, because it distracted from the implementation of plans and the difficult development of concepts. Based on this, the 5th generation Moskvich racing became the final formulas with the brand of the Moscow plant.

Unfortunately, the Moskvich racing type never appeared at international competitions. At the Friendship Cup socialist countries, he was also not seen. In the 65th, when the famous Gladilin and Shugurov were engaged in the engine. They decided to design a racing unit Moskvich-GD1 with eight V-shaped cylinders and a volume of 1.6 liters. 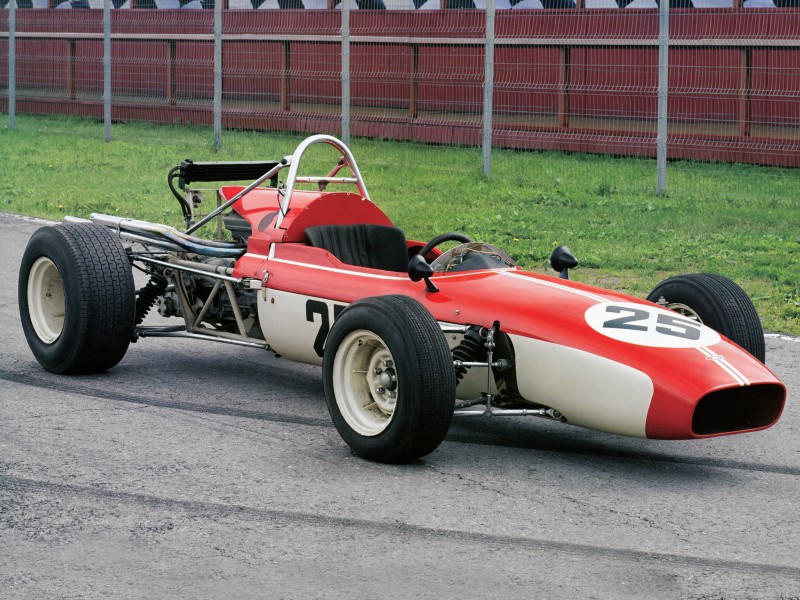 It was made of 4 motors from a motorcycle Vostok-S360, the volume of which each was 0.35 liters and produced 51 hp. According to the assumptions, the total power of the four-carburetor engine should have been equal to 200 horses. This index was equal to other aggregates of leading European countries and was competitive. Cooperated with them Serpukhov motorcycle CDB. Foreign candles, Weber 280 DKB carburetors and other elements were attracted. For synchronization created a unique 5-speed gearbox.

Standing on the stand, the engine, closing its eyes to its oil leakage and other eternal problems, squeezed 162 horses. There was a place for improvement. For him, specifically began to prepare one of the Moskvich-G5. However, at this stage, material support was required, which the engineers did not get. On such a sad end, everything ended. Auto 1st formula started to deliver with 3.0 liter engines. 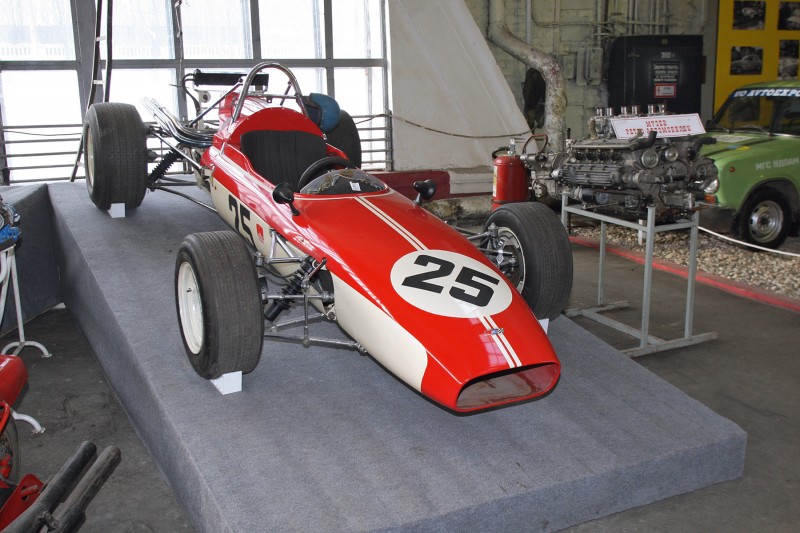 Recent memories associated with AZLK and competitions were at the end of the 80s. Considering the restructuring of some German companies, together with AZLK they started building a Formula 3 car. As a result, it, called TARK-Aleko with the symbol of the Moscow plant, a star with 5 ends, the famous sickle and hammer, was shown on the front line at the Essen exhibition center .

However, this soon came to an end. Partly in the protocol of the European Formula 3 of the 89th year, it was possible to see it, but it had nothing to do with the capital enterprise. In the Soviet Union there was no time to think about racing motor racing and its design, because the existence of the USSR itself soon ceased.