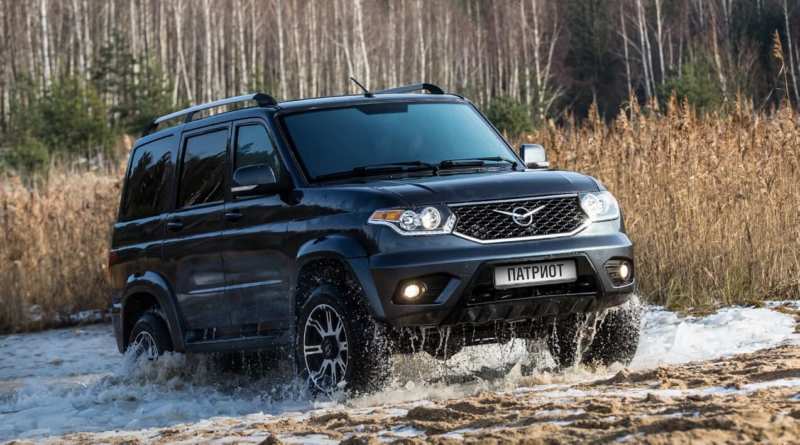 UAZ Patriot, a popular domestic SUV, has undergone the following modernization, which has allowed the vehicle to be more technologically advanced and modern. At first, it was already clear that it would be a 5-door frame machine with continuous bridges. The innovations will have low-noise bridges, the device of which was fully reworked. The whole model range is UAZ.

The start of UAZ Patriot implementation in the salons of the Russian Federation can be expected only in August of this year. But, as is often the case, there is a good chance that the term can be postponed to the end of autumn, or to the beginning of winter. If we talk about the reasons – this is a typical refinement, along with improvements to the vehicle. For many, even indirect, reasons, it was clear that the new UAZ Patriot 2017 would be able to go a long way. 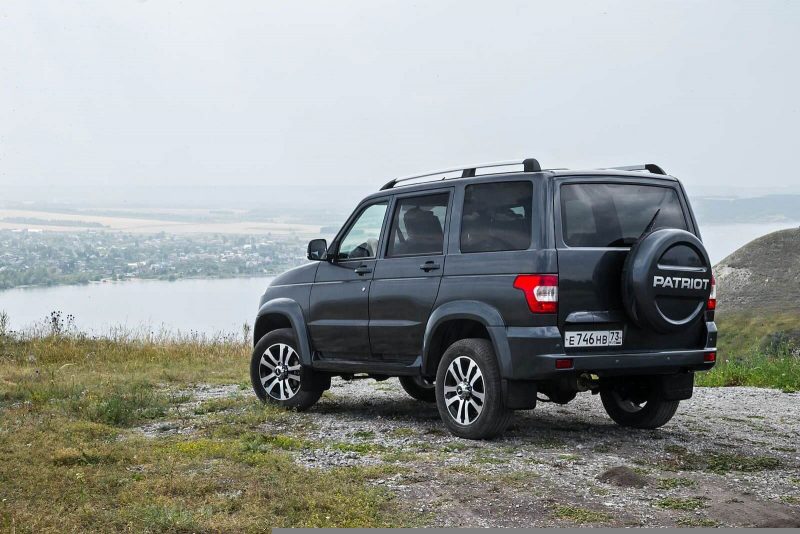 SUVs are what the Russian car industry has managed to do more or less well. The trucks always turned out to be excellent, unpretentious passable, which had easily repairable power units. Therefore, the 2017 model year was no exception. This article will provide an overview of the updated UAZ Patriot 2017. The article will describe the fuel consumption of the vehicle, its description, as well as possible tuning.

When it comes to certain upgrades of the new UAZ Patriot 2017, we can say directly that the changes have affected the hood of the car, which has become a new, more vertical windshield, and the luxurious new optical lighting system. The unique style was supported by unusual stampings on the hood and massive elements on the front bumper. The new radiator grille looks very unique, with sharp corners and three transverse stripes. There are modifications, which have more aggressive dodging and which have special lugs to install the winch.

The side of the Patriot has greatness and masculinity. There is now a completely new flat line of a large roof, which repeats a similar window sill line. The area on the side window was pleasantly surprised, so the visibility is no longer as bad as in previous vehicles. More powerful appearance of UAZ Patriot 2017 was given by massive side mirrors, which received shortened columns. They are equipped with lanes for repeaters and also have a folding function. 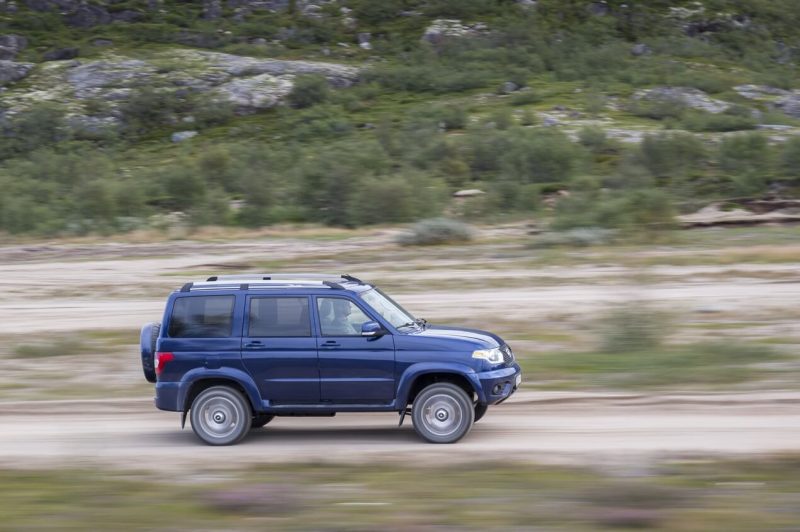 The doorways of the machine now have an increased width, and the doors close tightly enough, without requiring extra effort. By the way, they have established the presence of a wide folding footrest, which has no effect on the size of the clearance.

The new off-road vehicle body was subjected to considerable reconstruction. Now it had rigid supports that reduce the amplitude of vibrations, especially during sharp maneuvers. With the help of glued glazing the car became not only more stylish, but also improved its own noise and thermal insulation characteristics.

It was also decided to install a single fuel tank, so there was no need to install a pumping pump. In addition, if previously the tanks were made of metal, and after a while they began to rust, which led to clogging of the fuel filter, now they have already used a plastic tank. 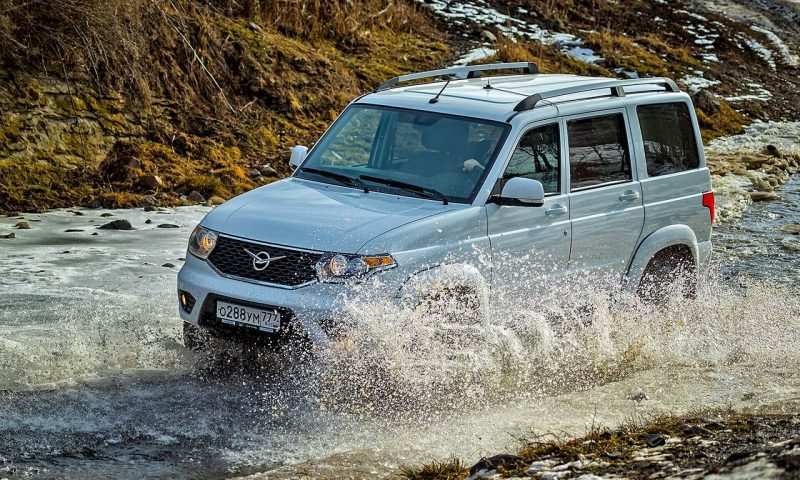 The stern part of the UAZ Patriot 2017 SUV also began to look solid and presentable. It would be incomprehensible if the company’s design staff changed the nose and side of the car, but left the stern as it is. There is a huge, massive luggage compartment door, where there is a spare wheel, which provides the car with a formidable appearance.

Speaking about the rear visibility, everything is in order here, as a massive glass is installed, and the rear racks have been made a little bit already, than in the previous family. They also installed other stop-lights, new fixtures of the 5th door, reworked the fixing of the spare wheel and strengthened the roof rails. 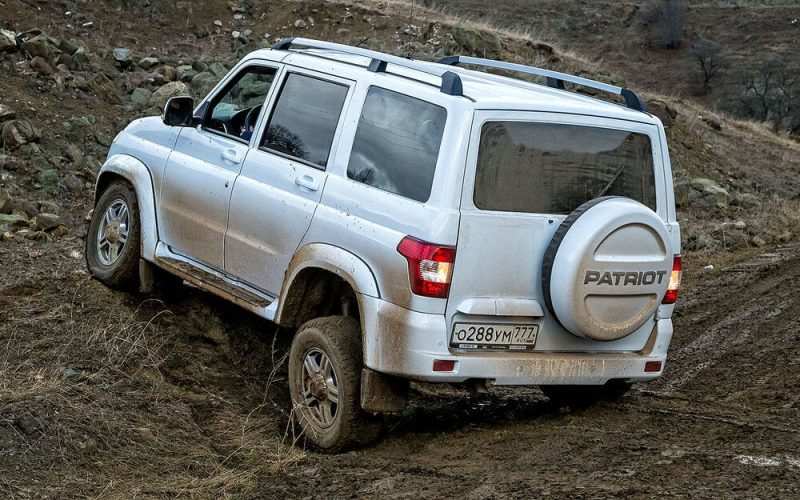 In addition to everything else, the framework of UAZ Patriot 2017 was strengthened. Where the body is attached, auxiliary reinforcements were installed near the frame. These improvements have significantly improved off-road behaviour and provided an opportunity to achieve fairly good crash test results.

When you get into the car itself, you notice that the changes have appeared here. The immediately striking dashboard is now more informative. It has a flat screen and a wide, gentle visor. Then you can see a comfortable four-spoke steering wheel, which is a top-of-the-range multifunctional. It was able to please the eye with pleasant green lighting devices, which allows you to create a special soothing atmosphere inside the car. 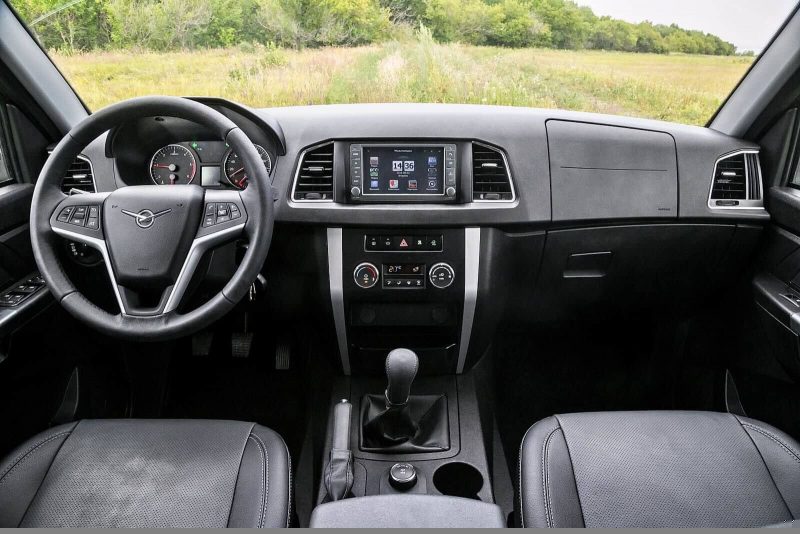 The most honorable place here is a luxurious wide central console. The driver has enough free space in the head and knees, and the steering wheel has settings that provide opportunities to sit behind the wheel of a domestic SUV with the maximum level of comfort.

After paying attention to the photos of the restyled model of Patriot, you notice that the standard location of devices on the console has been changed. The upper part is a pair of vertical rectangular deflectors, below which a 7-inch screen, which supports the touch input, was installed. 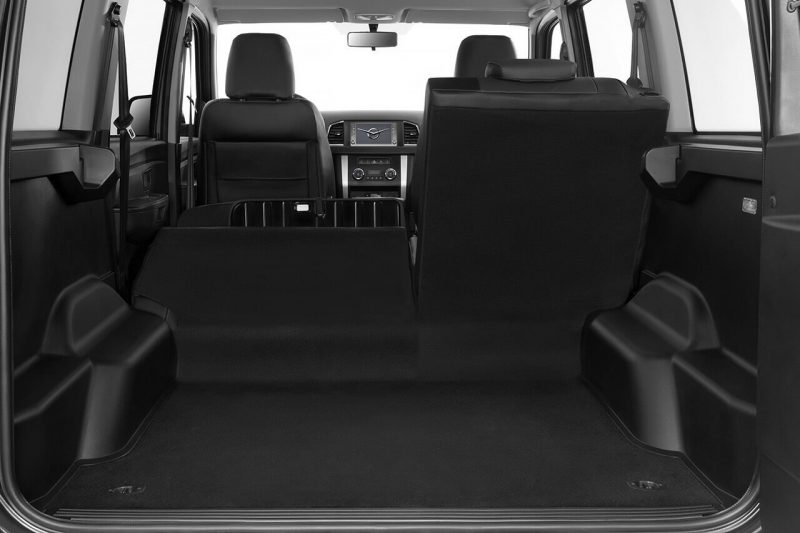 The lower U-shaped compartment has buttons and controls to adjust the climate system. Between the front seats there is a wide, but comfortable tunnel, which, as usual, has a gearshift panel and a soft armrest. If you touch the seats themselves, they are well profiled and have a range of settings. Also there is a presence of convenient headrests and qualitative lumbar support. Slightly pumped up the materials of SUV finishing, which were both the cheapest and remained so. This mainly applies to the plastic, which squeaks, and after a while shows the slits.

The sofa installed at the back by 80 millimeters was moved back to the rear. With the help of this they managed to increase the free space in the legs. There can accommodate three adult passengers. As for the luggage compartment, its volume remained the same (700 liters). As innovations there is a presence of a luggage compartment curtain with a yellow edging.

Thanks to the painstaking work done by the plant with the power equipment, it was possible to increase the technical component of the new model of machines of the 2017 model year. As a result, it was possible to increase the productivity of engines at low revolutions. Two engine variations are offered to customers: gasoline and diesel. The minimum equipment includes a 2.7-liter gasoline engine, which produces about 135 horsepower. The engine consumes about 11.5 liters per 100 kilometers. 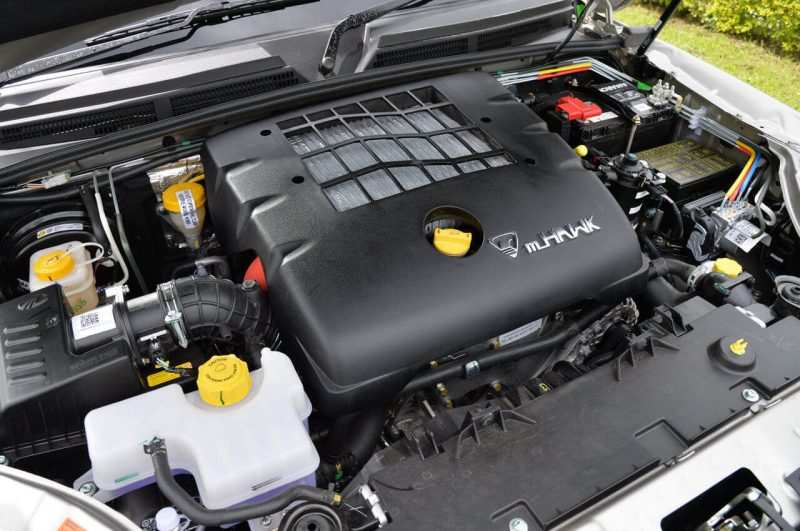 The engine meets European environmental standards Euro-4. In addition to gasoline, there is also a 2.3-liter diesel engine, which produces 114 horsepower. There is a four-wheel drive system here.

Fuel consumption by such an engine for 100 kilometers is about 9.5 liters. The maximum speed is 150 kilometers per hour. The fuel tank volume is 68 l. 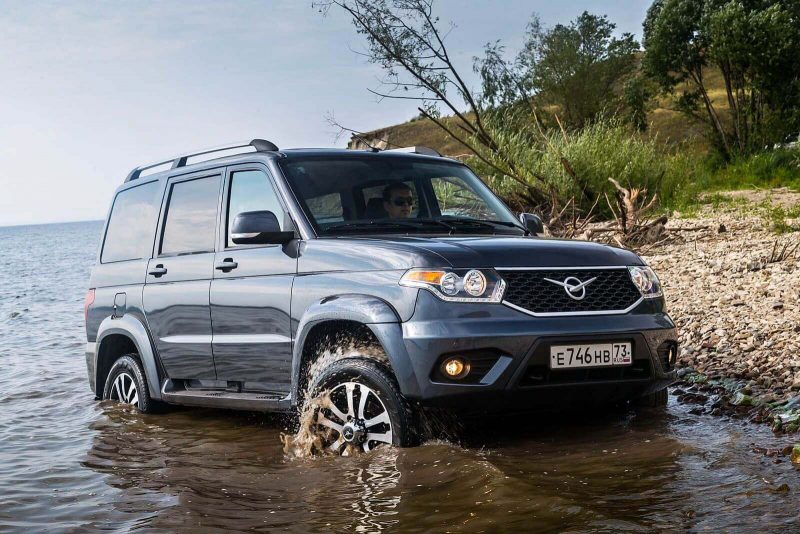 And based on the latest news, there is information that the Patriot may have another motor. This is a completely innovative engine, which has a volume of 2.0 liters. It produces about 140 horsepower. A gasoline-powered power pack will be equipped with a low-pressure turbine, which will be able to increase its efficiency at medium and high revolutions. But it is not clear whether the car with the new engine will be able to reach serial production.

All two variants of the engines will be equipped with a 5-speed manual gearbox. The automaton should be introduced only for the time being. It is clear that UAZ’s Patriot-2017 performance is not the best, but the model was not designed for racing. Therefore, the car has excellent off-road qualities, endurance and reliable bodywork. The handout is a two-stage electrically driven car.

It will be possible to purchase this vehicle in the Russian Federation in the first quarter of the 17th year. The minimum equipment is estimated at 699000 rubles. This version will have a gasoline version of the vehicle. The cost of more equipped models can reach 1039000 rubles.

The minimum version of Comfort has:

Top option will already have:

In its price category UAZ Patriot does not have many opponents, but they are and in some ways even surpass it. This includes Chevrolet Niva, DW Hower H3/H5, SsangYong Kyron and French Renault Duster. Each machine has its advantages and disadvantages. It is only worth noting that Chevrolet Niva has a mechanical locking socket, and the “Frenchman” electromagnetic, so the Niva will be clearly more reliable.

Despite this, most drivers prefer foreign cars. UAZ has a place of unreliability, weak engine, weak corrosion resistance of the body and inexpressive driving characteristics. However, the model has good cross-country ability, a powerful suspension is not bad stability. But the latest restyled versions of the car from Ulyanovsk make Patriot’s competitors seriously worried.

Among UAZ Patriot owners, the lion’s share is accounted for by adults and men. Based on Patriot’s feedback, it can be concluded that the main reason for buying is the acceptable price, powerful appearance, high ground clearance and all-wheel drive system. Drivers note comfortable seats, saloon, large luggage compartment, ride comfort, high landing and a full spare wheel on the door of the luggage compartment.

The car is practical, convenient and unpretentious. The small price for accountants and spare parts only pleases. Inside there is a lot of free space. Judging by UAZ Patriot’s feedback, it becomes clear that the SUV received a weak powertrain. Because of the large size, the car is very loose, and the engine itself is loudly operating. Sometimes the paint starts to fly off, and the assembly itself leaves much to be desired.

Inside, there is a lack of comfort. The quality of noise insulation suffers. The engine consumes not as little fuel as it would be desirable. After a speed mark of 100 kilometers per hour, it is not comfortable to drive at all.

For some 10 years Ulyanovsk designers managed to transform the machine beyond recognition. The car behaves with dignity on the lack of roads, in urban conditions it does not even think to lag behind its competitors. It is also good for long-distance trips with family. The only thing that has not changed is the engine.

It is unpretentious in maintenance in general reliable, but its power is simply not enough for the car. I want something more abrupt and serious. Moreover, the price list for this SUV is not popular anymore. Now it is not just an ascetic model, suitable only for the real “Russian men”. 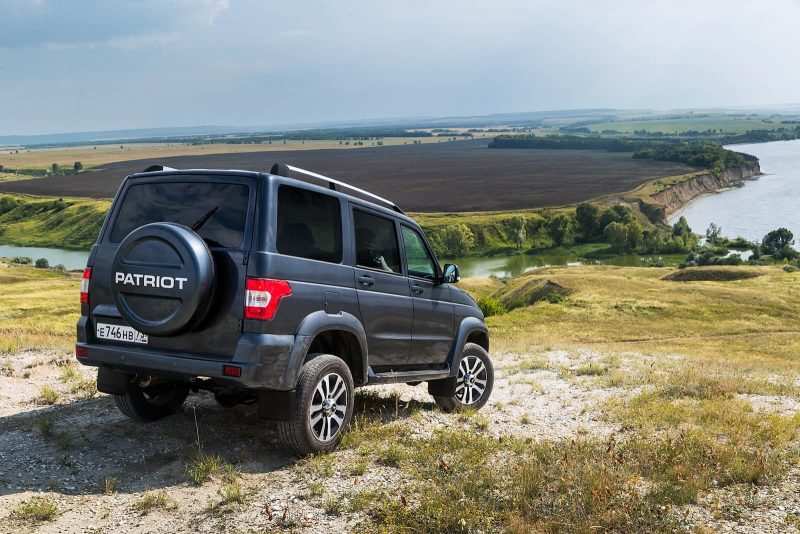 You feel comfortable inside. There is no lack of free space above the head and in the knees, and the volume of the luggage compartment allows you not to worry about transporting goods. Larger items can be transported on the roof of UAZ Patriot 2017, with the help of installed rails. 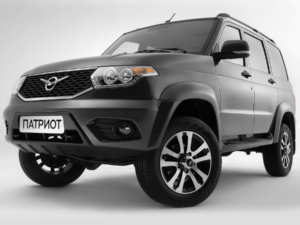 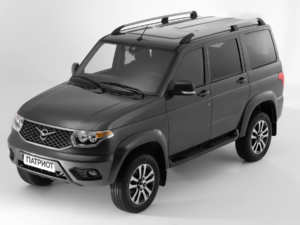 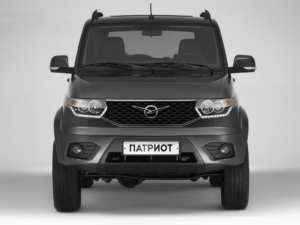 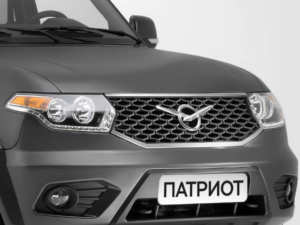 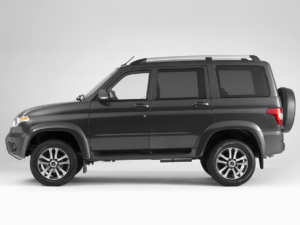 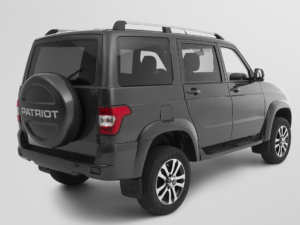 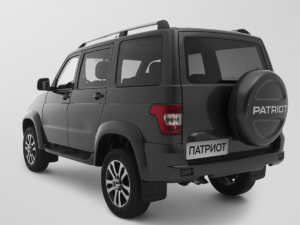 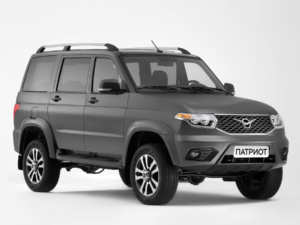