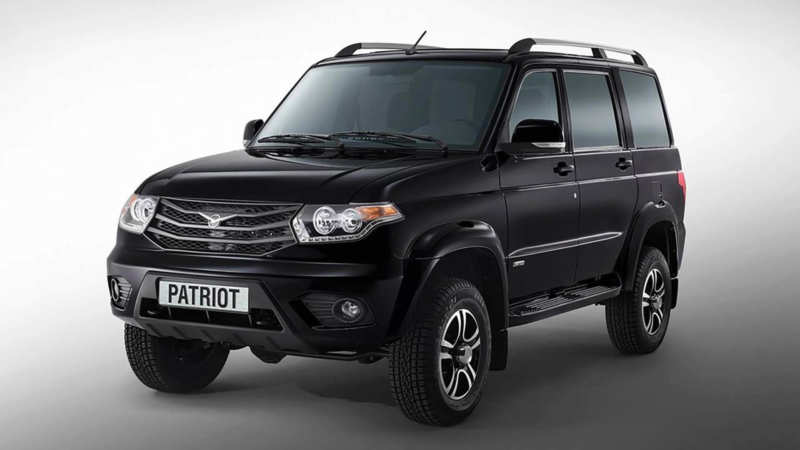 UAZ Patriot of the 2015 model year began to enter the country’s car dealerships in November 2014. The company’s dealers actively accept orders for the domestic novelty and, it should be noted, it is in quite good demand. Patriot differs from its predecessor in its refreshed appearance, although other parameters have changed for the better. UAZ brand has long been loved by residents of Russia and other CIS countries. As to say, the Ulyanovsk Automobile Plant products are much more loyal to us than to VAZ cars. The whole model range is UAZ.

The design of the new UAZ Patriot 2015 combines power with comfort. The V-shaped grille and bright headlights give the car an expressive look. To improve consumer performance, the designers equipped the car with fog lights, mirrors to match the color of the body, brake signal, glued glass. A still updated “Patriot” has got the steps for ease of use.

Thanks to the modernized lanterns and a new wheel container, the rear part of UAZ 2015 has been visibly changed. The car’s stability is enhanced by a stabilizer at the rear, unlimited life of cardan shafts, 16 or 18-inch wheels. 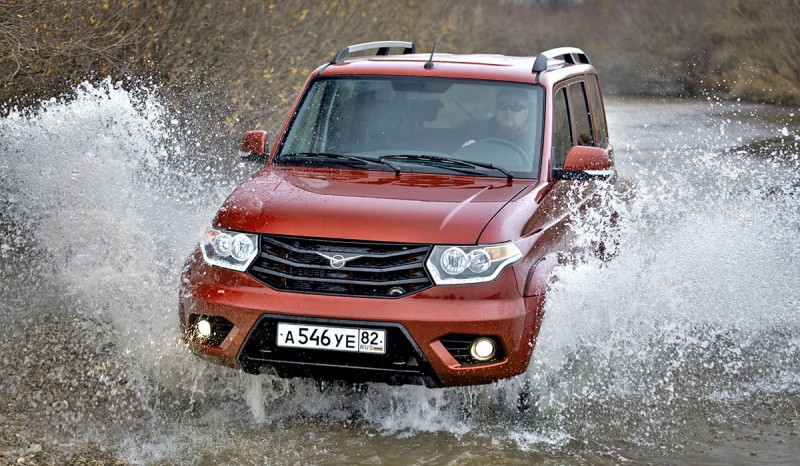 The appearance of UAZ Patriot after restyling in 2015 has changed significantly. Now you can fully experience the modernity in the design style. The car began to look more stylish and more expensive, which allowed the car to compete with other well-known off-road vehicles, which flooded the domestic markets. It is immediately felt that the design staff tried to realize in the car all the desires and tastes of different people and at the same time to approach closer to the needs of the driver of urban life. 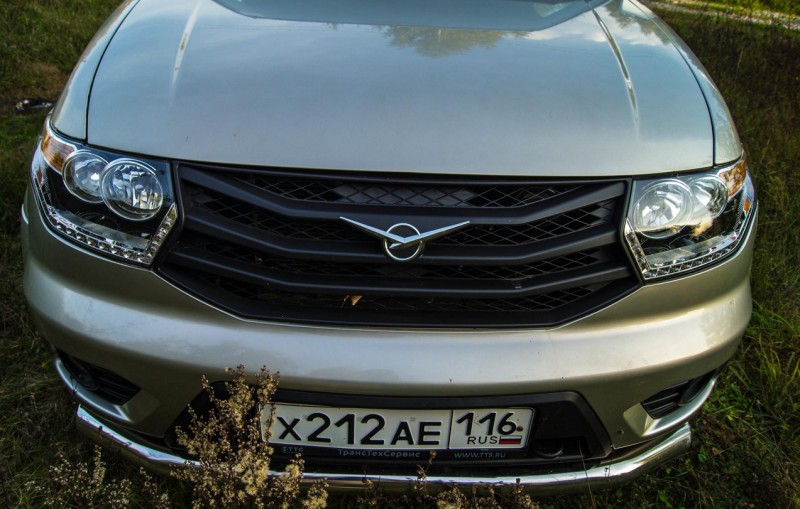 Specially the updated bumper grille, which has a non-standard configuration and a non-standard form of head optics of the car. When these elements were performed, the design team tried to apply broken lines, which, in general, was not badly applied to the updated style of the jeep.

The new 2 spotlights were combined with direction indicators and a strip of daytime running lights using LEDs. It is important that now bumpers are attached to the body of the SUV, not to the frame, as in the past, which allowed to avoid unnecessary large gaps, which could spoil the appearance of UAZ. 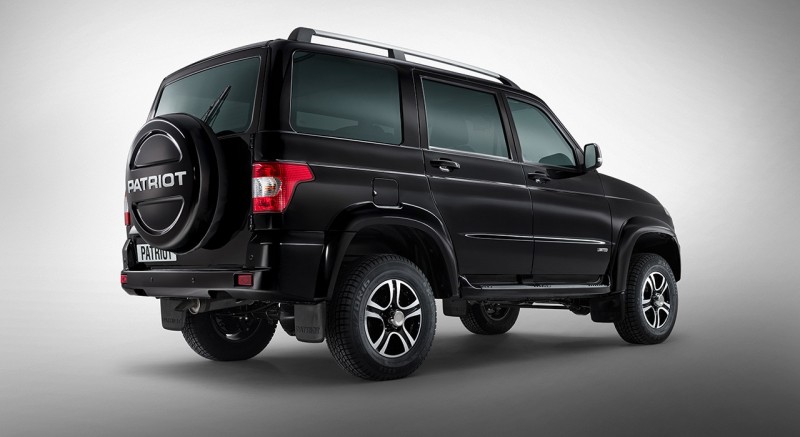 It is necessary to mention about back lanterns which unusually slip on a lateral part of a car body. The list of upgrades includes folding mirrors on the sides, side footrest, which does not underestimate the ground clearance and serves for convenient landing and disembarkation of the driver and passengers.

The place where the spare wheel is located has remained unchanged, but now a new plastic cover has been invented for it. Of course, it is asked to make the rear bumper more impressive, but its large size does not have a bad impact on the exterior of UAZ Patriot. 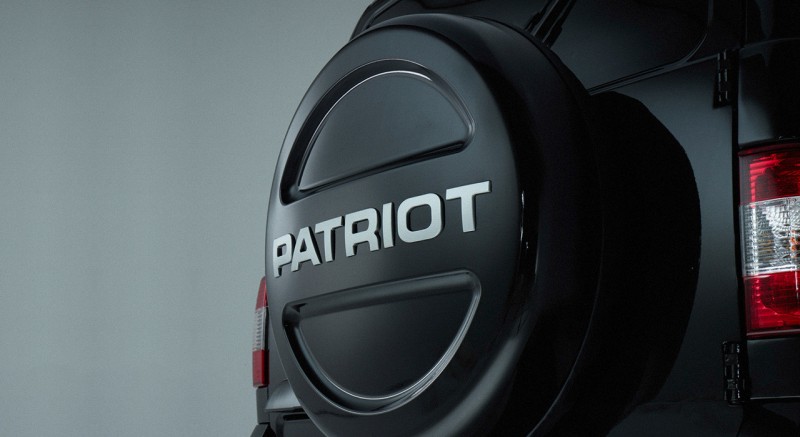 After the first glance at the updated SUV, there are only pleasant impressions of a quality and at the same time stylish car, which is able to compete with other models. Though, to confess, a spoonful of tar is still necessary. They remained, though not the same as on the previous models, but still have big gaps. And here quality of colouring has appreciably grown that has approached it to foreign standards. For this purpose the newest equipment from Europe for car painting has been established.

The body was also updated in a technical moment. The supports in the updated SUV body were reinforced and became much stiffer, which allowed to reduce vibration during sharp maneuvers. After restyling UAZ Patriot 2015, glued glazing was carried out, which raised the level of the SUV aesthetically and improved its insulation in terms of sound and heat. 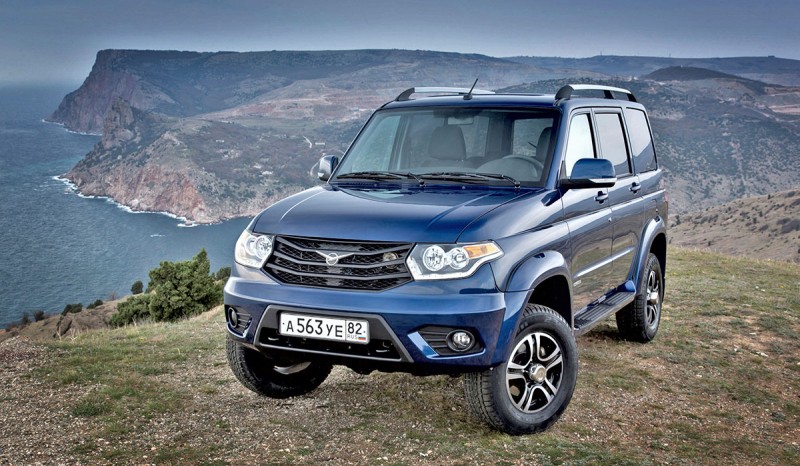 At first glance, the salon has not changed much compared to the previous UAZ Patriot 2014, but this appearance is deceptive. The instrument panel has become more informative and equipped with a router display. Constructors threw out the Korean seats and replaced them with domestic ones with a wide range of adjustment, reliable lumbar support, improved profile. If you quickly assess the car, you can conclude that the interior has not undergone any changes, but when you sit behind the wheel, you begin to discover a list of improvements.

At once you notice other lever of speed change. The transmission lever, which caused discomfort for drivers, was removed. The appearance became more beautiful, and the interior decoration became more qualitative. Also, a new dashboard with on-board computer display was installed. 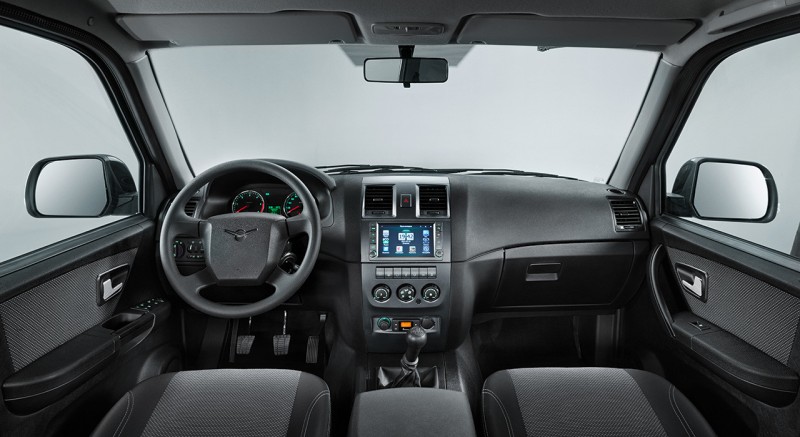 In the center is a large 7-inch screen with a navigation system, and below it is the computer control keys. Control desks with ventilation, air conditioning and heating also found their places.  The big interior of the car heats up quite quickly, because four ventilation systems are installed, which are located on the front panel of the SUV.

New LED lighting was installed in the cabin, which indicates the desire to keep pace with modern technology. In addition, UAZ can have a good rest, because the back of the front row, unfolding, together with the rear seats form a couple of great beds. 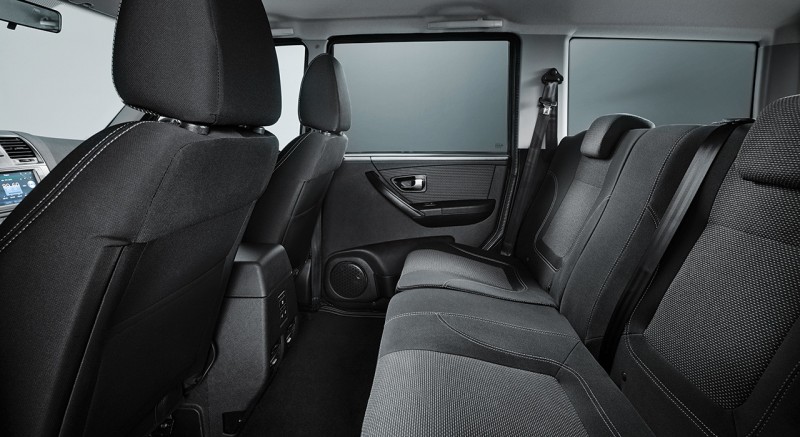 It is possible to remove the third row, and if necessary, the middle row, which will greatly increase the free space. The quality of music has increased noticeably due to the new stereo. I was pleased with the quality of noise insulation of the interior.

The rear sofa was moved to the stern by 8 cm – now the passengers’ feet will feel much more comfortable. The salon has received a modern system of lighting with LEDs, boot curtain with a fairly rigid trim, 12-volt socket. By the way, the capacity of the boot remained at the level of 700 liters. 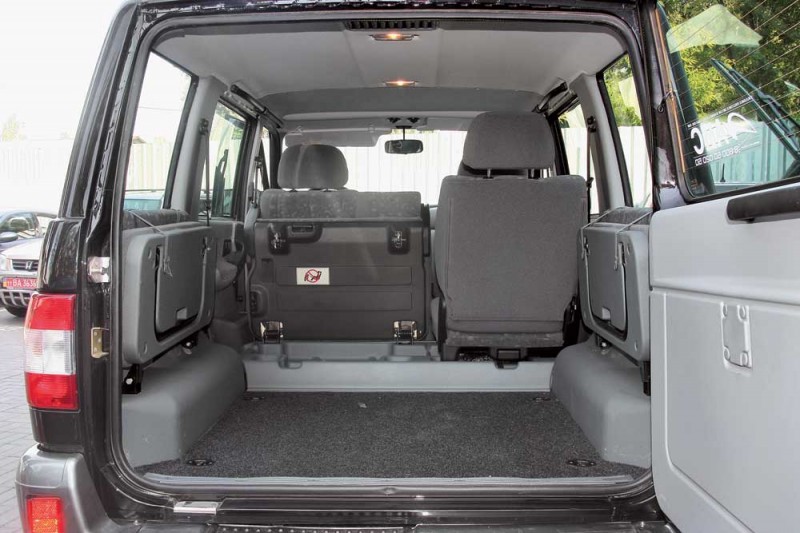 There have been no significant changes in the engine line, except for the diesel engine. It has four cylinders and a volume of 2.24 litres, a special fuel injection system called Common Rail. The maximum capacity of UAZ’s 2015 diesel engine is 113.5 horses and the vehicle is accelerated to a maximum of 135 km/h. 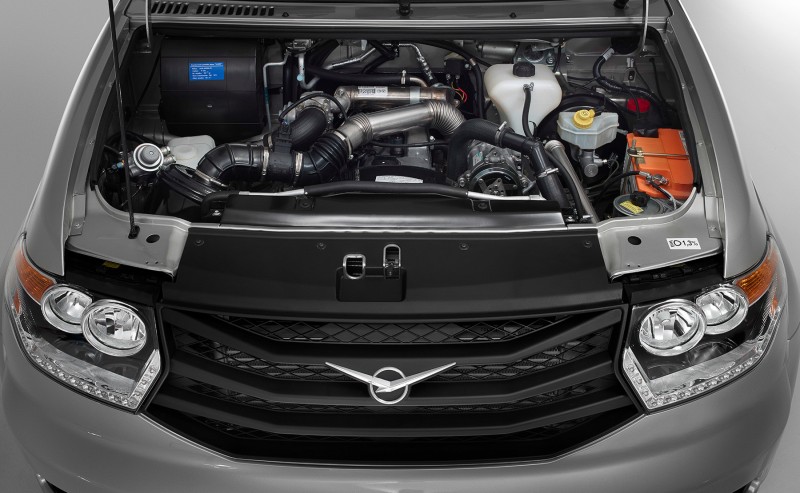 The chassis hasn’t undergone any changes since the UAZ restyling. The engineers operated the last suspension with springs in front and with springs in the back. Although the new modification is retailed with the use of a pair of stabilizers of lateral stability at the front and back. This allows to provide the smallest value of the roll of the car when turning. In order to increase passenger comfort, the engineering staff was able to adjust the suspension of the SUV. This has improved the driving characteristics of the Patriot on the roads in the city.

However, now, the “Russian jeep” will be supplied with other shafts of the cardan. Whereas previously they had to be lubricated every 10,000 km, now they will be fitted with maintenance-free PTO shafts. The front braking system is equipped with a disc braking system, which is also ventilated. At the rear, the drums have found their place. In addition, an additional mechanical parking brake drive, an overseas vacuum-energized booster and ABS and EBD services have been included in the higher-level versions. The steering wheel was complemented by a hydraulic booster. 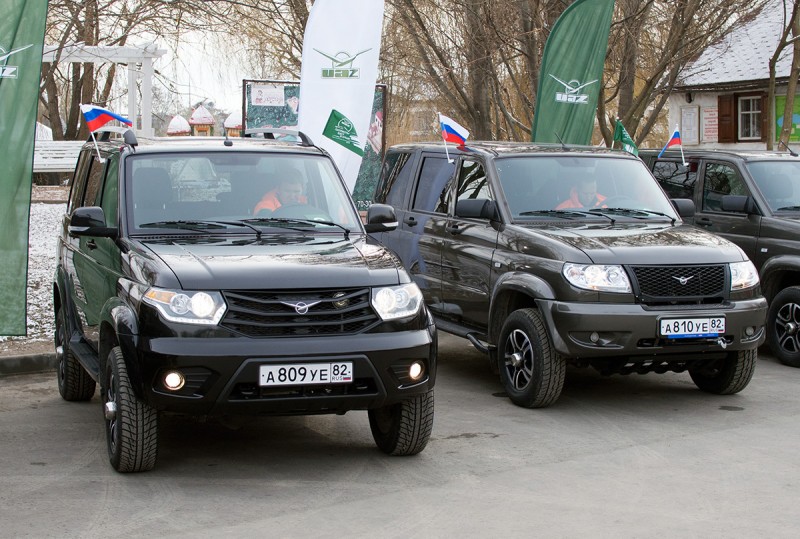 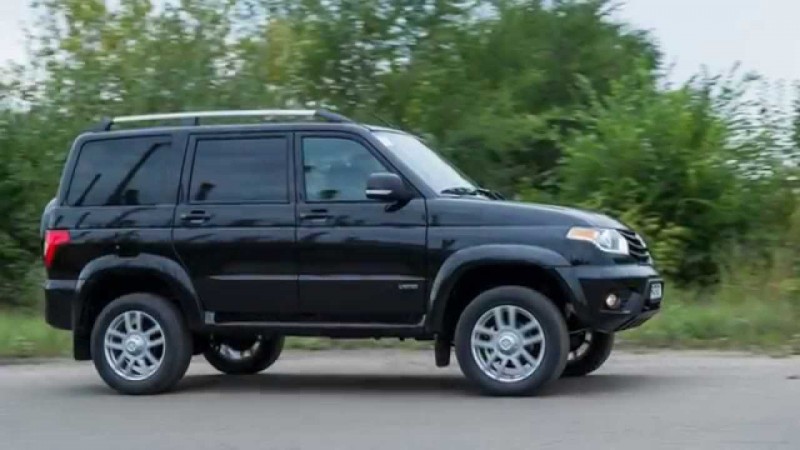 For some 10 years Ulyanovsk designers managed to transform the machine beyond recognition. UAZ 2015 car behaves with dignity on the lack of roads, in urban conditions it does not even think to lag behind its competitors. It is also good for long-distance trips with family. The only thing that has not changed is the engine. It is unpretentious in maintenance in general reliable, but its capacity is simply not enough for the car. I want something more abrupt and serious. 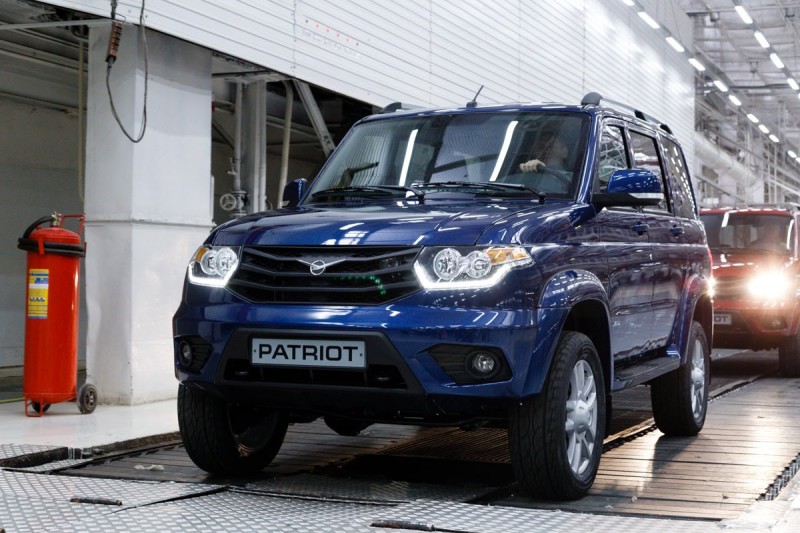 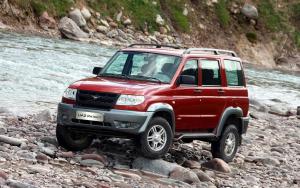 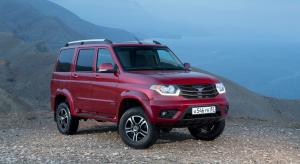 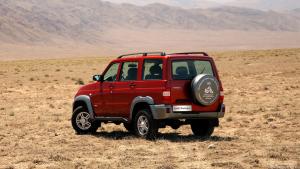 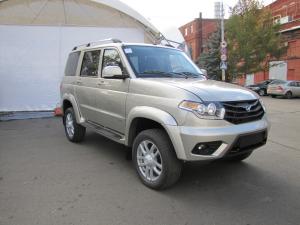 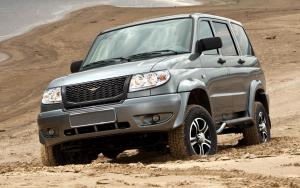 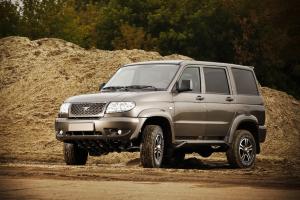 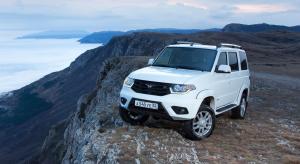 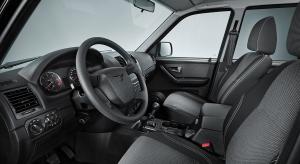 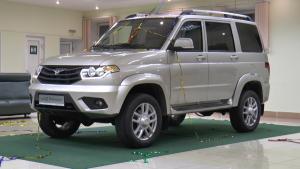