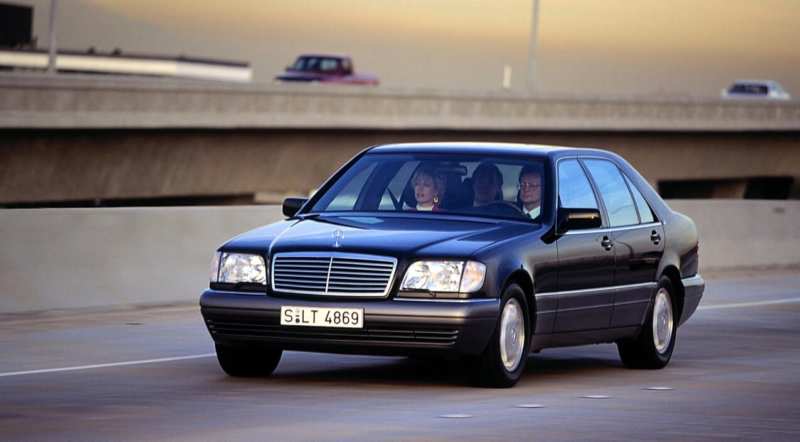 Mercedes-Benz W140 is a series of flagship models of the S-Class produced by the German company Mercedes Benz. The new model was officially introduced in March 1991 during the Geneva Motor Show. This model replaced the Mercedes-Benz W126, which, despite its commercial success, had become morally and technically obsolete by the early 1990s.

The new car was better in many ways. It boasted a more aerodynamic body, unique double glazing, automatic closing doors and luggage compartment, and a climate control system that functioned even after the engine was turned off. Also of note was the presence of tail antennas that rose when the reverse was engaged. The whole model range is Mercedes-Benz.

In total, the Germans produced 458 thousand cars. The car became, in fact, the most legendary model in the history of the Daimler concern. The exterior of the Mercedes-Benz S-Class W140 did not get innovative design solutions. Instead, the car has an austere style, which the public loves in many countries around the world. The development of the appearance of the German company’s flagship sedan decided to entrust the Italian specialist Bruno Sacco.

He was able to make every effort to preserve the brand’s signature style and make the novelty more modern. The sedan boasts the already familiar signature radiator grille on the legendary W126, but in a slightly different design. The headlights themselves have received a washer system, as well as heated nozzles. 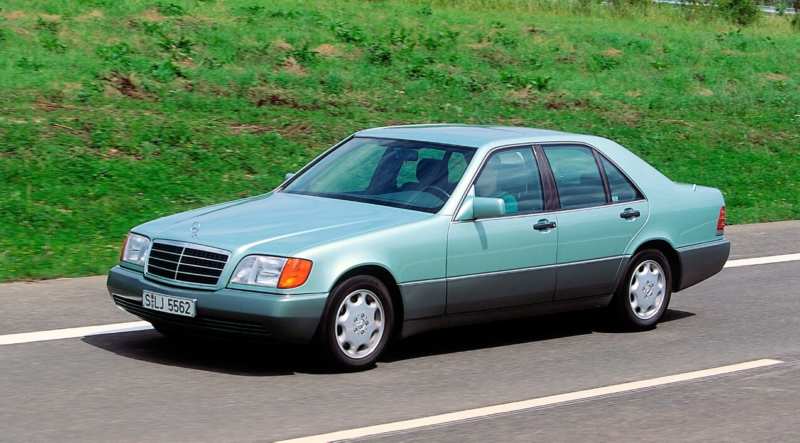 Many motorists enormously liked the car because of the index “600”, because of which it received the nickname “six hundred,” although in our country so-called all W140. The index “600” 6-liter version of the sedan was given in honor of the famous limousine W100, a rival to the Rolls-Royce Phantom 5th generation.
Almost immediately, you can notice the thinner chrome trim, which is organically integrated into the car’s hood. The Mercedes-Benz star was decided to move from the radiator grille to the hood.
Thanks to such little things, it was possible to make the appearance of the Mercedes-Benz S600 W140 more luxurious and representative. Also, the engineers were able to improve aerodynamic characteristics significantly. 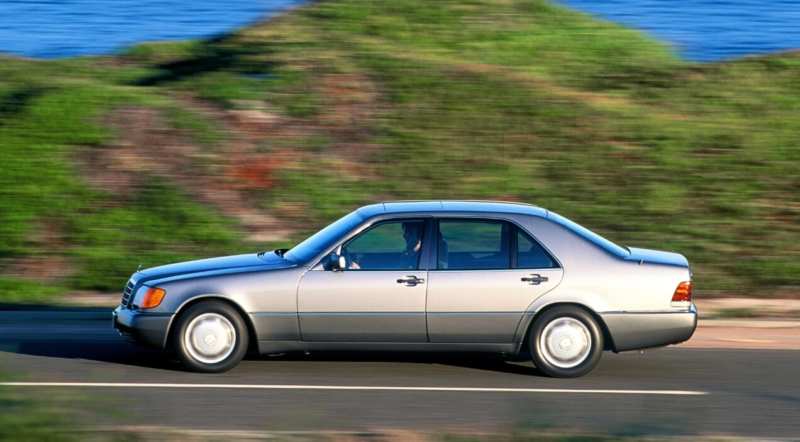 Germans wanted to pay more attention to the entire construction’s reliability, so the car has strong materials, excellent anti-corrosion treatment, and paint. Many sedans are still driven today with native paintwork. Ground clearance height is a reasonably average 150 millimeters.

After the modernization of 1994, the front headlights were slightly changed. The executive sedan got transparent turn signals and the taillights got a transparent section in the upper part. The car was supported by 16-inch wheels. The body is equipped with energy absorption zones.

Despite the heavy body it may seem that the car has poor aerodynamics, but in reality the engineering staff managed to achieve excellent frontal air resistance of 0.31 Cx.

Many motorists think that “German” has even today’s modern interior. It does because the sedan boasts electric seat adjustments, double glazing, anatomical seats with paging function, door closers, as well as separate climate control. German engineers managed to make everything electric that can move.

An unusual solution is the presence of a central interior mirror, which can be adjusted using the same electric drive. In front of the driver is a large four-spoke steering wheel. Behind it, there is a massive dashboard. In the center is the speedometer, and on the left side is the tachometer. The left side shows fuel level, engine temperature, and so on. 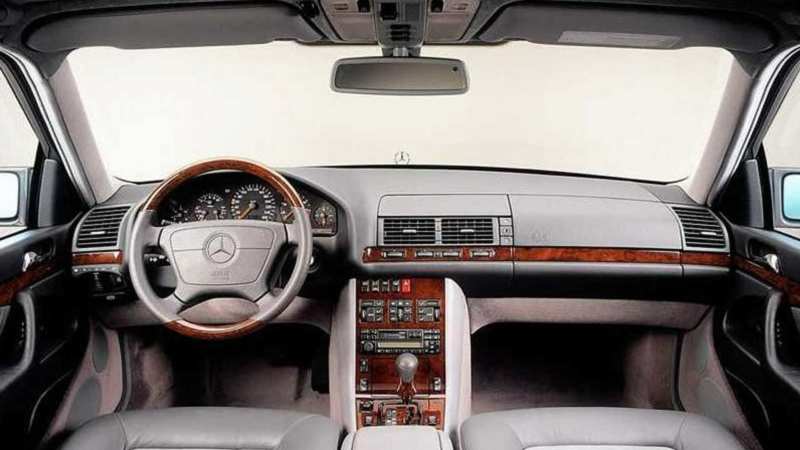 The clock has been placed in the rightmost part of the instrument panel. The center console has the standard air vents of the climate system at the very top. Below there are many buttons responsible for various functions of the car. First comes the control unit for climate, then the music system. The tunnel is decorated with a beautiful knob to control the gearbox.

If we talk about noise insulation, it’s excellent. This is partly thanks to the double glazing. But there is another side of the coin. Because of the

The considerable weight of the glass unit, the window elevator mechanisms often failed. Interestingly, the windows could not be raised if they bumped against something, for example, if a child stuck his hand out of the window. And this kind of thing can be found in many parts of the sedan.

There is plenty of space inside the Mercedes-Benz. The leather of excellent quality can be seen everywhere. The level of comfort, even today, is pleasing. If you open the door, you immediately catch sight of the aluminum plaque on the sill. The inscription Mercedes-Benz will not let you forget about the status of the car. Even on the second row, there is plenty of space. You can quickly put your foot down.

If you buy the extended model, there will be an additional 100 millimeters for the rear passengers. The seats are very comfortable. There are headrests, armrests and everything you need for a comfortable stay. The luggage compartment is also roomy and got 525 liters of usable space.

The “German” had quite a few gasoline and diesel engines. All engines had a chain drive. Under the hood of the flagship German sedan had gasoline inline six-cylinder engines, the capacity of 2.8 and 3.2 liters, which generated 193 and 231 horsepower. Also, the “boar,” boasted a more powerful 4.2-liter, 286-horsepower V-8, as well as a 5.0-liter, 335-horsepower “engine.”

Among the diesel models are the 3.0- and 3.5-liter engines, which developed
177 and 150 horsepower, respectively. But the more expensive version could boast a 6.0-liter V 12-cylinder 400 or 414 hp engine. This powerful engine allowed the heavy flagship sedan to accelerate to the first hundred in 5.5 seconds. 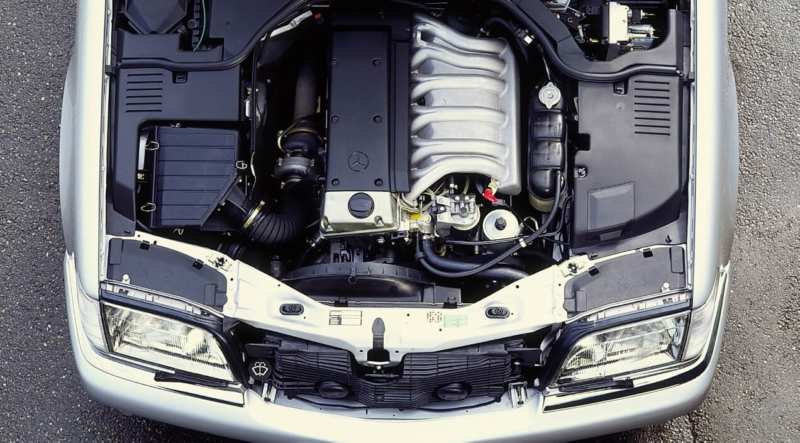 The coupe versions received V8 and V12 engines. As you can see, the technical characteristics of the Mercedes Benz W140 are amazing even today. It is also interesting that the lion’s share of the market is gasoline “engines”.

All power was transmitted to the rear wheels via a 4 or 5-range automatic (5G-Tronic 722.5) or 5-speed manual transmission. Later, the “automatic” got a locking system in the GDT.

The car had front and rear independent, spring suspension. The rear has hydropneumatic springs. The comfort from the levers is simply amazing. On top of that, these levers proved to be very good. The sedan was steered with a hydraulic power steering with speed-dependent force.

The braking system received disc mechanisms with ABS, BAS and ESP support. The car was created on the threshold of the computer era, so it should not be amazed that it has a lot of innovative technologies for those years.

As for the electrics, it is the most problematic part, because everything can break down, from throttle sensors to “cruise”. And there is no sense to talk about the quality of German products, just the resource of all blocks, which can include ABS and so on, has long been exhausted. Also, we should not forget about corrosion, which affects the wiring.

You can buy Mercedes-Benz S-Class W140 without any problems today. The secondary market is literally full of these cars. The prices for them will also please you. The price of the Mercedes-Benz 600 W140 can be today from 150,000 rubles. However, it is important to understand that these cars will be in very poor condition.

So it is better to at least multiply this figure by 2-3 times. There are also options that are in very good condition, but their price tag exceeds 1 million rubles. Completion will also depend on the specific model, but in general, the German sedan will not disappoint you. 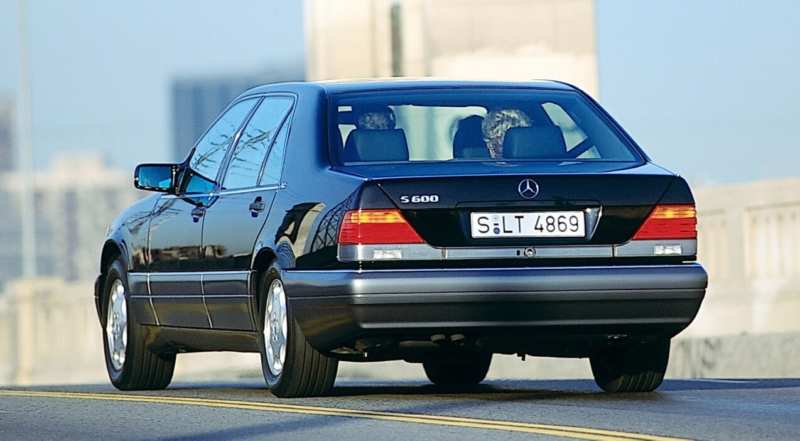 Before us is actually a legendary car of the German automotive industry, which has a very interesting and rich history, especially in Russia. There are people who to this day think that this is the best model, which is not even inferior to modern cars. Those who grew up in the 1990s are very eager to buy this “German”, especially considering the big drop in prices on the secondary market.

However, the aspiration is quite dangerous, as the lion’s share of buyers are quite insolvent. Therefore, do not think that, having bought yourself this sedan you will not spend a lot of money on repairs or spare parts. It is also worth mentioning the high fuel consumption. Therefore, if you do not have extra money for further acquisitions, it is better to pay attention to younger models or cars of other, cheaper in service brand. 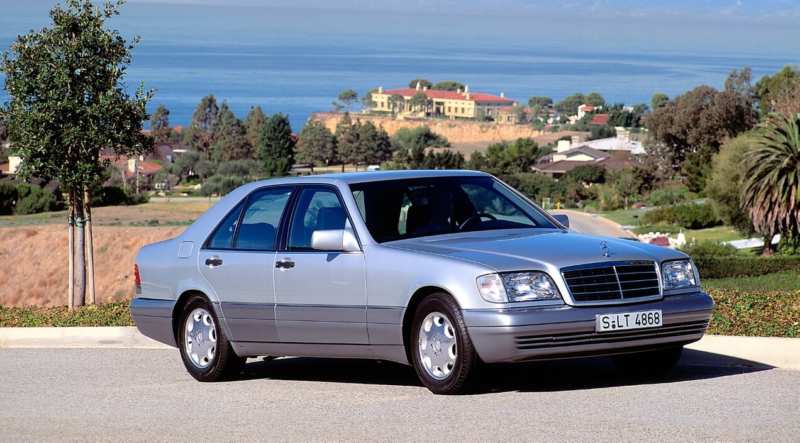 But the real connoisseurs of the German brand cannot be stopped. And you can understand them, because the model has an unusual, attractive exterior, quality, comfortable and well thought-out interior, powerful powertrains, an abundance of electronic systems and a good level of safety. Yes, Mercedes-Benz W140 will long remain not only in the memory of car owners, but also in the history of the automotive industry.

We suggest you read the article: Mercedes-Benz, Classic German Cars 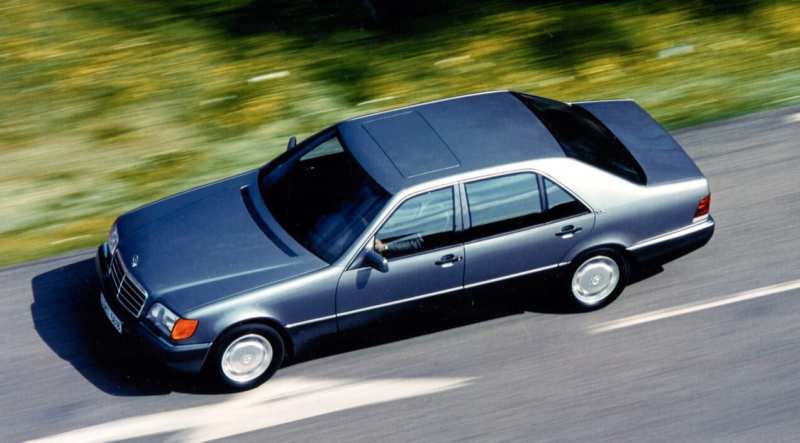 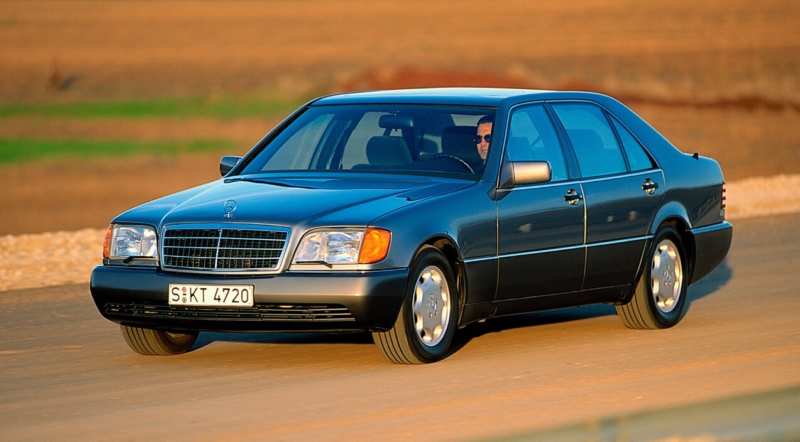 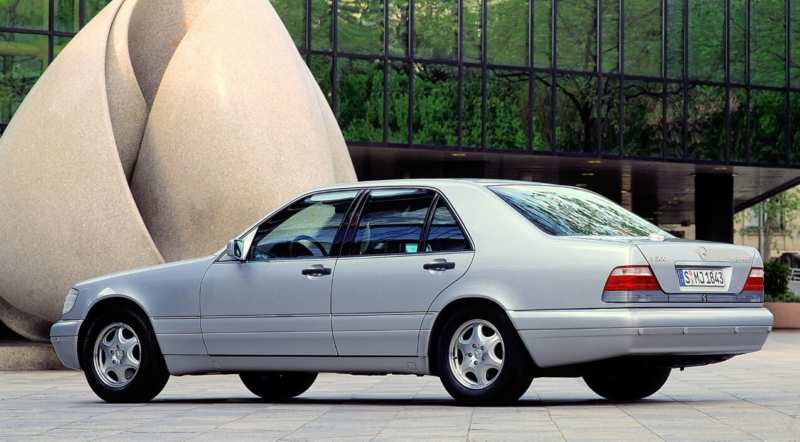 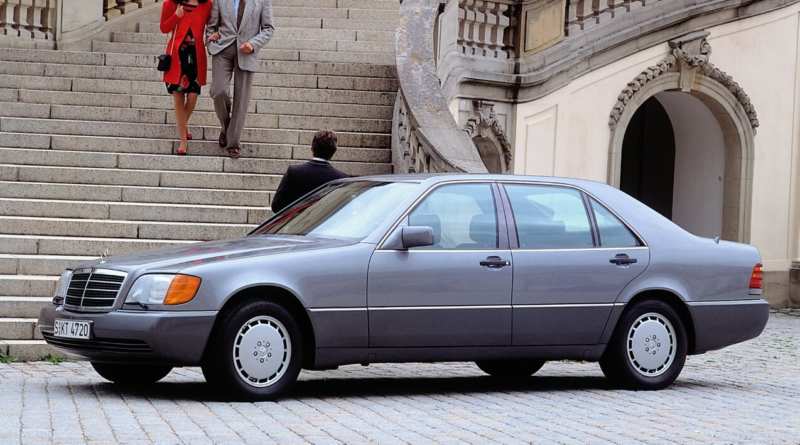 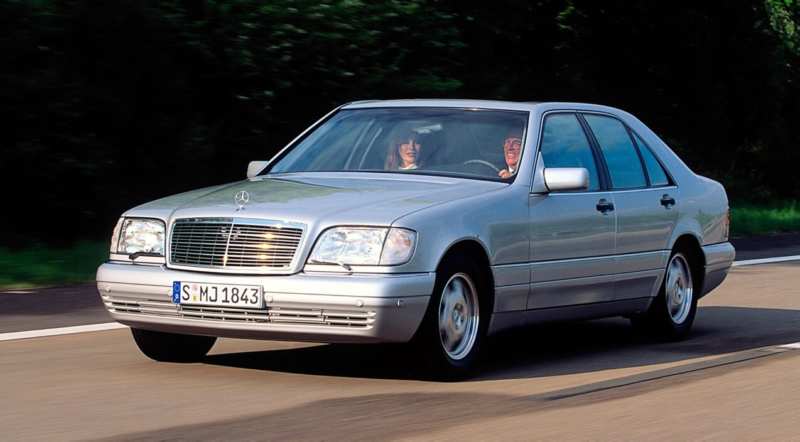 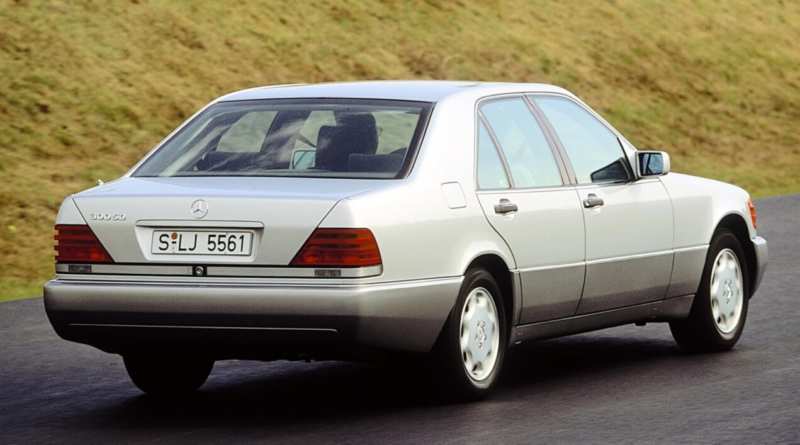