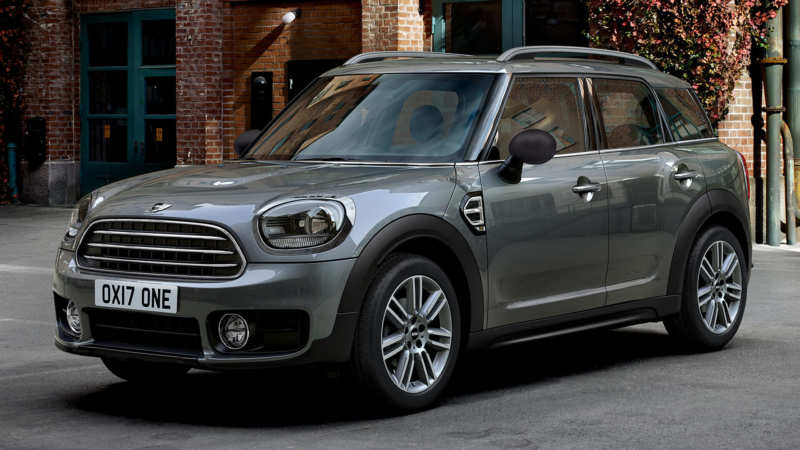 MINI Countryman is the first five-door SUV in the premium British brand (which belongs to the subcompact SUV division). It has various modifications – from the initial “One” to the most productive with all-wheel drive MINI Cooper ALL4 Countryman. For the first time, the model Mini Countryman R60 appeared in January 2010. The second-generation
famous Mini Cooper came out near the end of 2016. The entire Mini lineup.

The changes to the exterior have only had a positive effect on the MINI Countryman 2nd Generation. It has become more masculine. The front end boasts an aggressive hood and a grille in the form of a “grinning mouth.” The grille itself has been finished with a contour. Looking at the amount of chrome, it becomes clear that the British appreciate it.

It is recognizable by its signature exterior by the front optics, which is filled with LED lights. It boasts classic round outlines, as well as wide chrome trim. The large-sized bumper has a massive air duct located in the center and large compartments spaced apart on the sides, where plastic plugs and round fog lights are built-in. 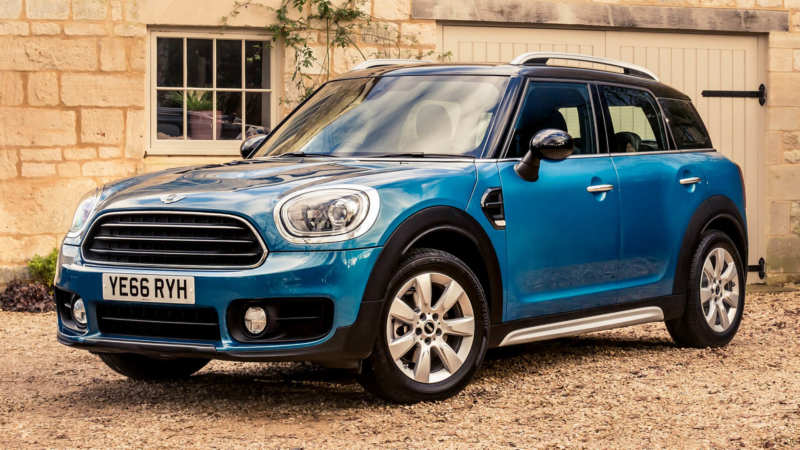 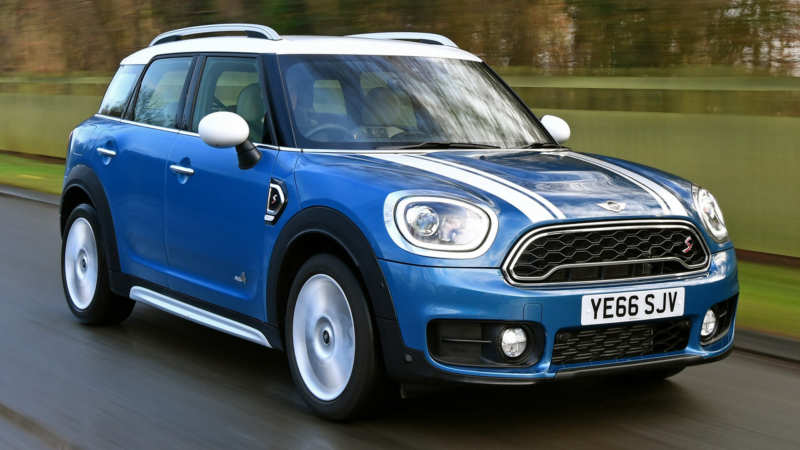 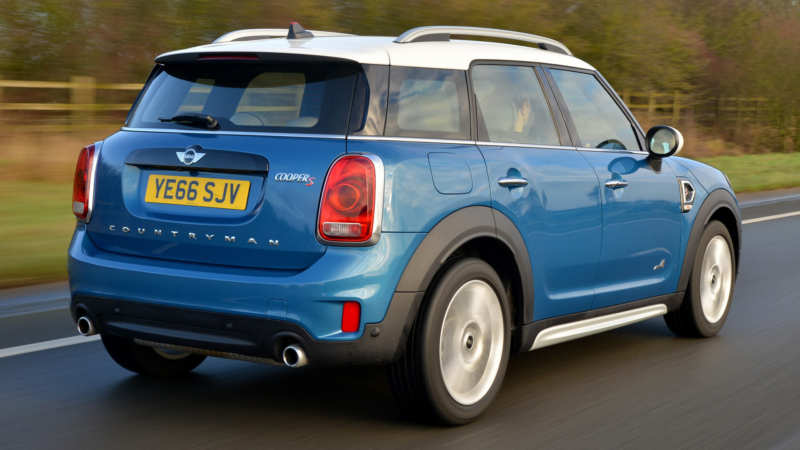 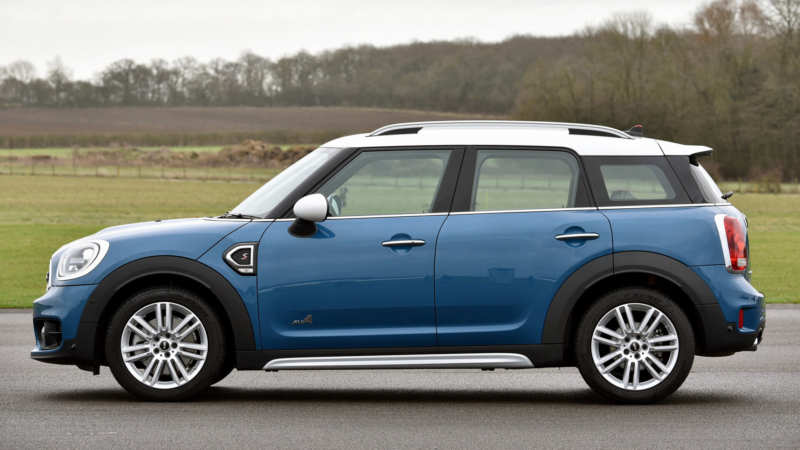 The side of the new MINI Countryman 2021 has “swollen” wheel arches. They can be fitted with various branded “rollers” of the British brand. The crossover’s sills boast chrome plating. Thanks to the unpainted plastic at the bottom and short overhangs, others understand that the car is focused on off-road capabilities. The glazing has an unusual shape due to the sharply sloping roof at the rear. Therefore, the glazing area at the end is much smaller than at the front. The clearance height is 165 mm.

The car’s rear is equipped with a definite spoiler with integrated brake light, rectangular lights with a vertical orientation, and rounded corners.
There is also a chrome trim. The entire width of the rear trunk door has the inscription “Countryman.” There is a place for small “pipes” of the exhaust system on the bumper’s sides.

The changes to the interior have affected the free space. The second-generation “gave” the rear passengers additional 10 centimeters of freedom. This is partly due to the new platform and the possibility of adjusting the rear seats longitudinally. The interior boasts high-grade, durable leather upholstery and pronounced side bolsters. The front seats have an abundance of adjustments, and the rear seats, in addition to longitudinal adjustment, have adjustable backrest tilt. In general, the interior has retained the usual “cartoonishness,” and the design team has done a lot of work on the details and ergonomics.

The driver’s seat is equipped with a 3-spoke multifunction multifunctional steering wheel with aluminum inserts. Next, it is difficult not to notice the typical MINI dashboard, highlighted by a vast speedometer.
Behind the panel, you can see a small touchpad, which shows the projection. Previously, the picture was displayed directly on the windshield. 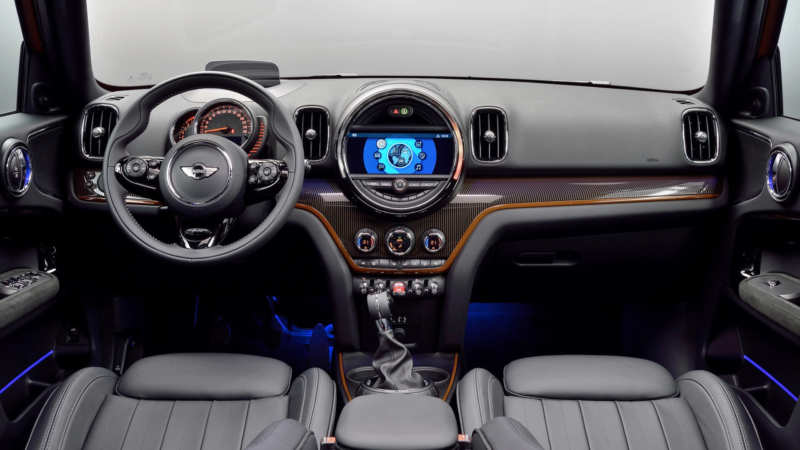 The center console boasts a classic “circle,” with a built-in 8.8-inch entertainment center display and necessary controls for the multimedia setup. After the update, the round element is much better connected to the Brit. Suppose the first generation is allowed only to change the backlighting color. In that case, the second family will enable you to customize it to display the volume of the “music,” the imitation of the tachometer.
Moreover, it can signal danger on the road.

The car has enormously changed in the luggage compartment. Now there is a flat floor when folding the rear seats. In addition to this, the British boast new finishing materials, as well as additional space. By default, the trunk has 450 liters, but after removing the back row, the figure grows to 1,390 liters of usable space.

The second family received five modifications. The Cooper’s base version has a B38 three-cylinder 1.5-liter gasoline engine with a turbocharger, single balancer shaft, 12-valve timing, direct injection, and phase adjustment on the exhaust and intake. This generates 136 horsepower (220 Nm).

The Cooper S has a 2.0-liter aluminum turbo four with a Twin Scroll turbocharger, direct power, a pair of balancer shafts, and a throttle-free mixing system. This engine produces 192 horsepower (280 Nm).

For connoisseurs of diesel versions, the British have released the Cooper D and Cooper SD models. They have a four-cylinder 2.0-liter turbocharged engine, 16-valve timing layout, and Common Rail injection. The first option generates 150 hp. (330 Nm) and the second generates 190 horsepower (400 Nm).

The engine and wheels are linked by a 6-speed manual (not available only for the most powerful diesel unit) or an 8-band Steptronic automatic transmission. The hybrid version, on the other hand, works with a 6-speed automatic. The torque is transmitted to the front, but by paying extra, you can install an all-wheel-drive system with a 5th generation Haldex electro-hydraulic clutch that activates the rear wheels. Up to 50 percent of the traction can be transferred to the rear.

For the MINI Countryman, engineers have applied the UKL “bogie,” which has an independent McPherson type system in front and a “multi-lever” in the back (there are transverse stabilizers everywhere). If you pay extra, the Parkett will be equipped with electronically controlled shock absorbers Dynamic Damper Control with three operation modes. The body has a high- strength steel and aluminum. The steering is done with the help of a rack-and-pinion device with an active electric booster. The braking system has “pancakes” on all wheels with ABS, BA, EBD, and other support.

The price of the MINI Countryman starts at 2,483,000 rubles for the base version with front-wheel drive. The full version can be purchased for 3,773,000 rubles with an all-wheel purpose.

The British have updated their unique model in time. Their novelty has excellent handling, stylish design, as well as quality, original and customizable interior. Anyone can choose a suitable modification with the right options.

We suggest you read the article: Mini, original cars 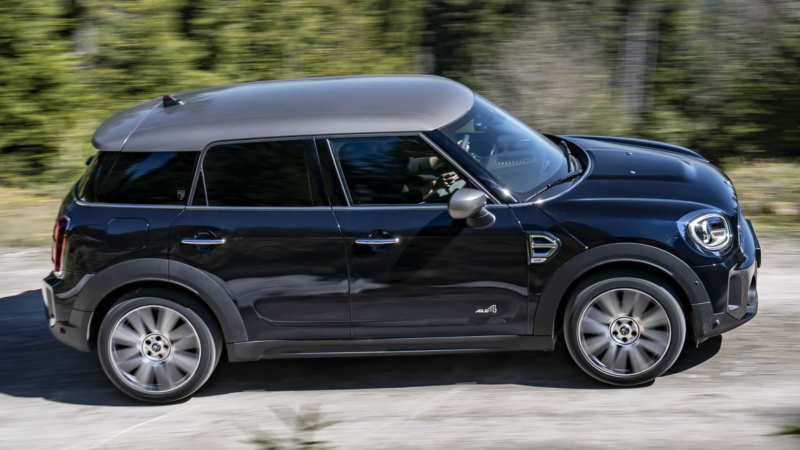 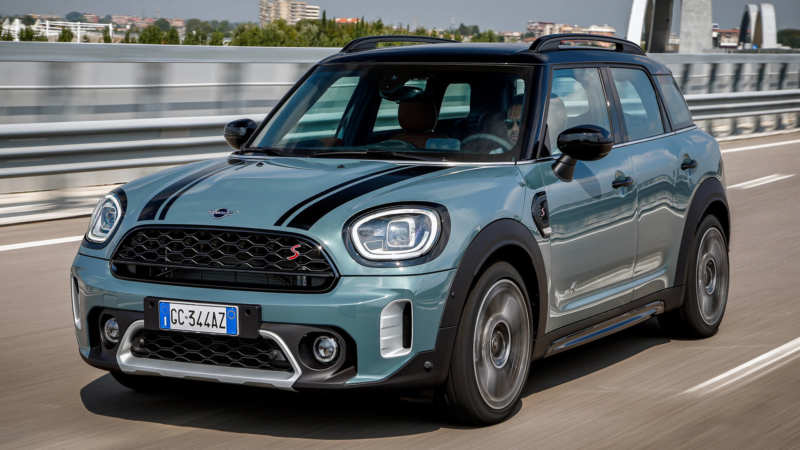 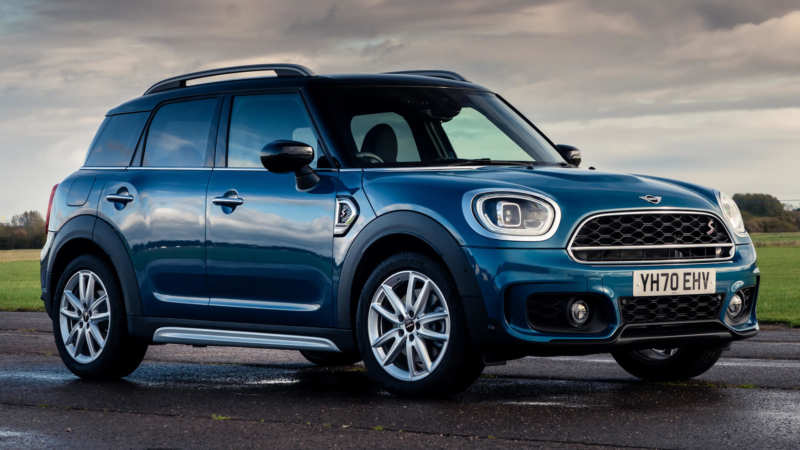 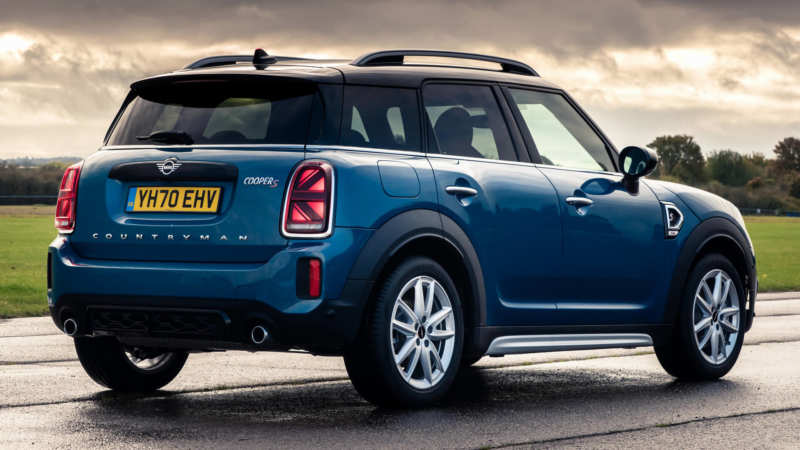 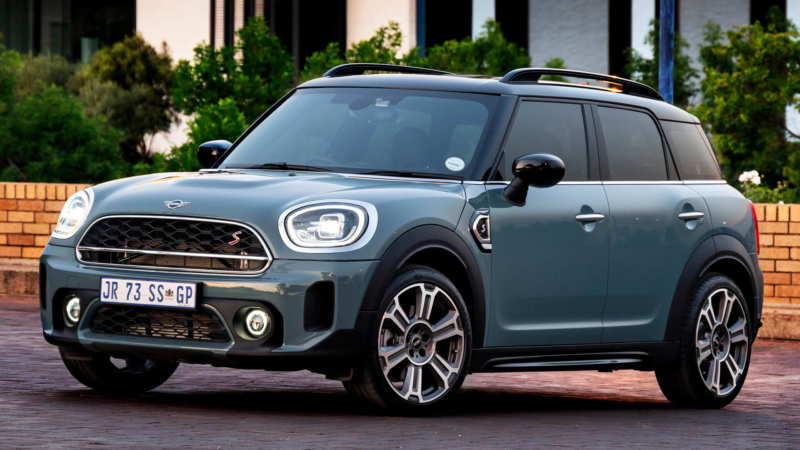 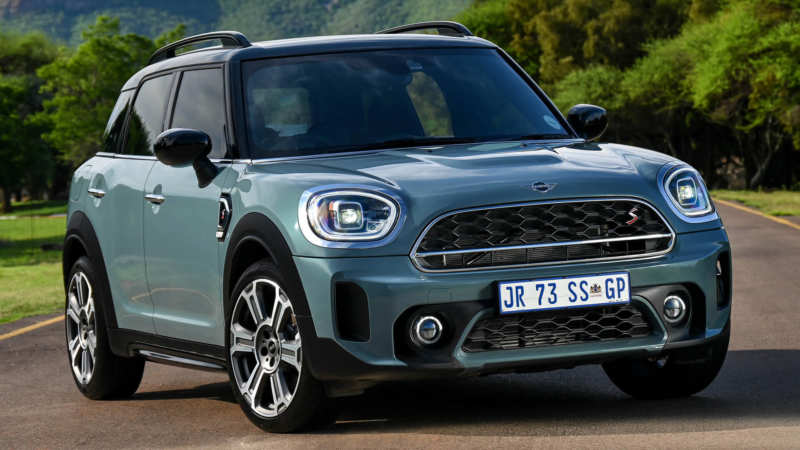 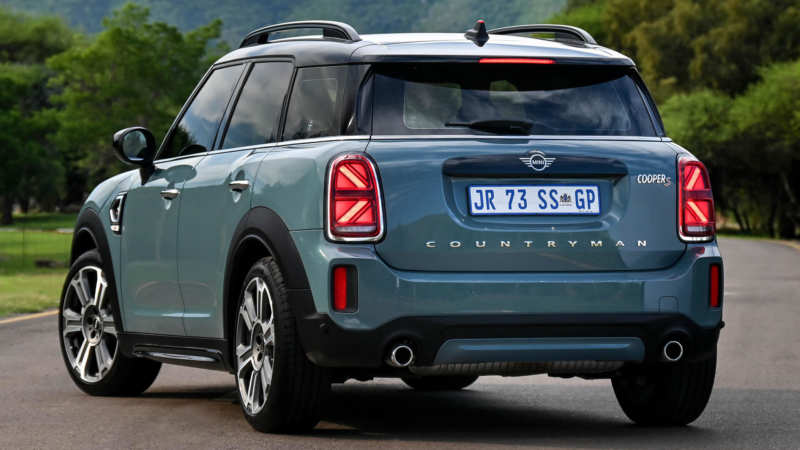 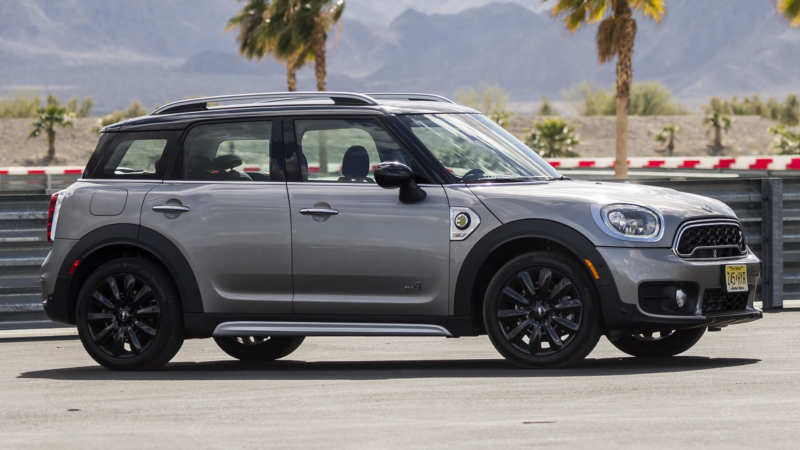 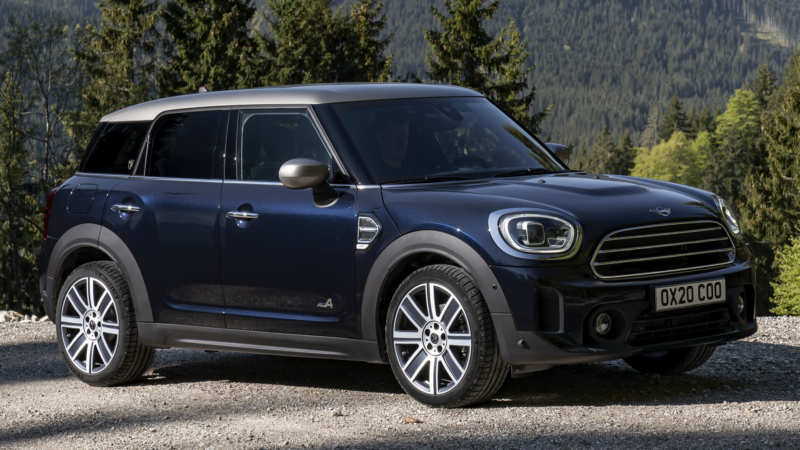