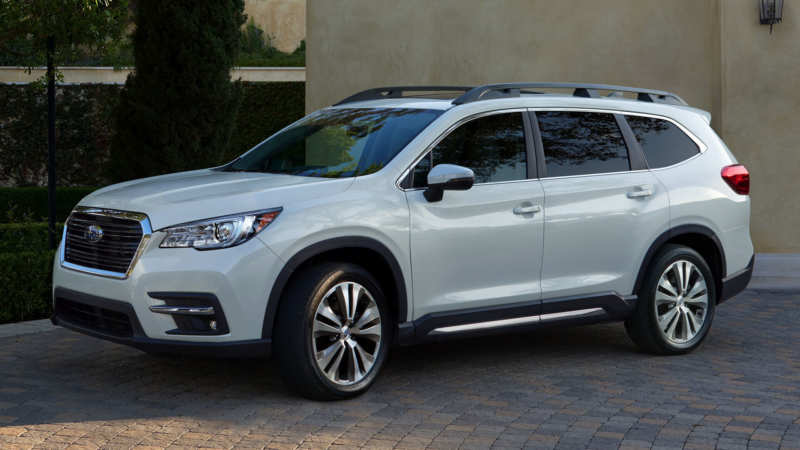 Subaru Ascent is a four-wheel drive SUV of the mid-size category (coming from the American standards), which received a 7- or 8-seat interior layout. The car is the main commander in the model list of the Japanese company Subaru.

The model was specifically produced from the beginning for the North American market as a replacement for the B9 Tribeca. For the first time, the concept version was shown back in 2011. Then it was called Viziv – 7 Concept. The public saw a concept version during the Los Angeles Auto Show. But the second time, the car, called Ascent, was shown in New York in 2017, and the same year, but later in Los Angeles showed the final model. They began selling the Subaru Ascent in the summer of 2018. The whole model range is Subaru.

It should be noted at once that the exterior of the novelty resembles quite well the last family of Subaru Forester. The Japanese design department has decided to stylize the cars with one image, which makes them quite recognizable among other cars. The front part of the SUV has a massive radiator grille, which received chrome slats and modern LED optics, which has cutouts near the center.

As the basis of the optics, it was decided to use DRL, C-type, placed along the contour and pronounced lenses. If we talk about the front bumper, it in many respects resembles the new Forester model. Instead of the vertical fog lights, there are installed round elements equipped with a chrome horizontal inset. A distinctive feature, which gives Subaru Ascent to SUVs’ niche, is a black dodger made of plastic. This can also include an additional radiator grille in the center. The front end has not received any unique elements – everything is simple. 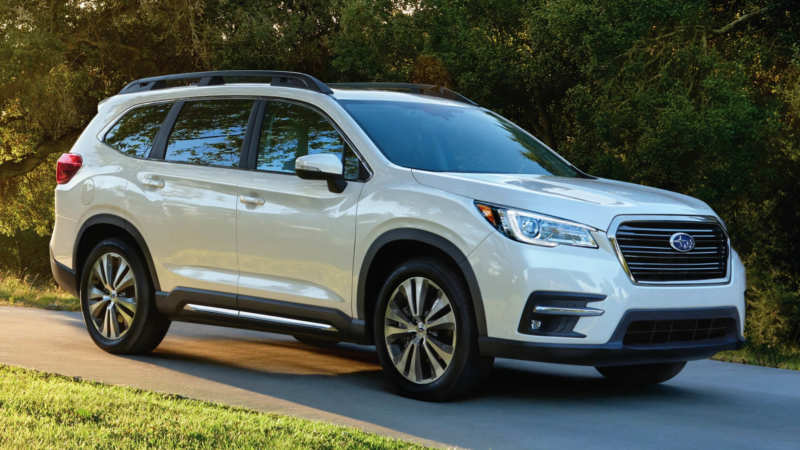 The long side is given out by the three rows of seats inside the car and the side window. It is important to note that the Ascent is one of the most massive crossovers of the Japanese company, designed for three seats. As in the front, the side does not stand out in anything unusual. It is equipped with the traditional dodger at the very bottom, made of plastic, chrome window trim, and installed exterior mirrors on the door. The exterior mirrors have a substantial functional arsenal.
Even the entry-level version of the Subaru Ascent 2020 boasts LED turn signals, automatic folding, a heating function, and a non-standard LED illumination in the far upper corner. Thanks to this innovation, you can easily find the car in the parking lot at night or illuminate the doors when approaching. Japanese SUV is based on 18-inch light-alloy wheels, but you can install 20-inch “rollers” as an option. Install more wheels won’t work because the wheel arches won’t allow it. The height of ground clearance is quite impressive, 220 millimeters. 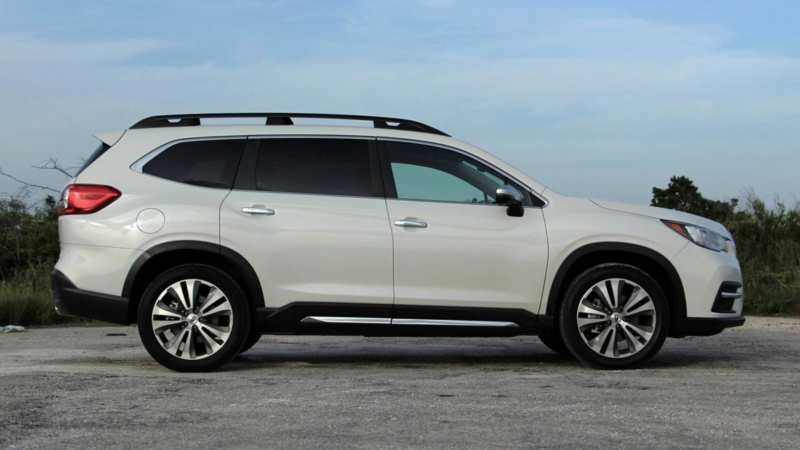 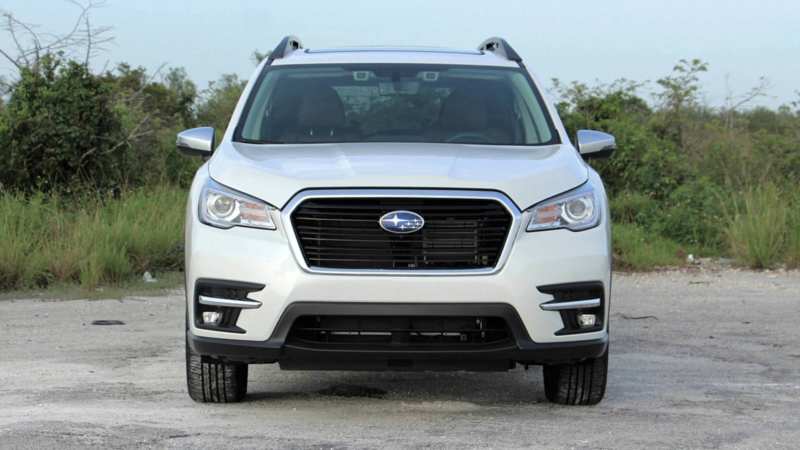 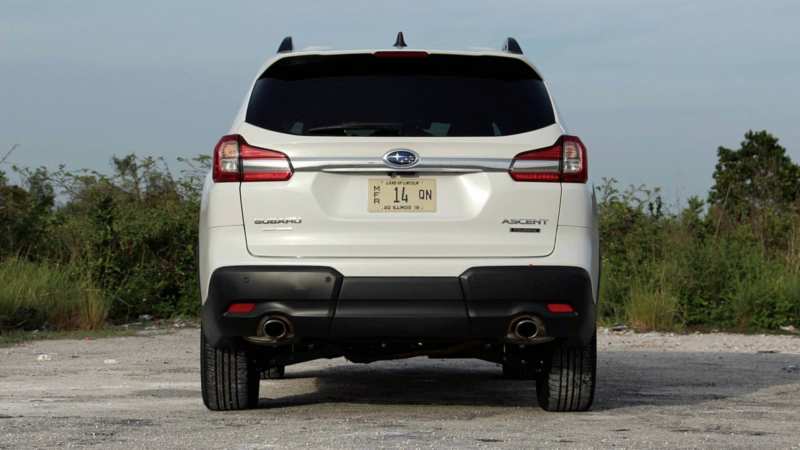 The stern of the car also did not get individual lines. There is a large luggage compartment door. At the very top is placed a large spoiler instead of the LED-type brake light repeater. If we talk about the rear stops, here is also pleased with the presence of LED design. Some of the headlights are placed on the body, while others are installed on the luggage compartment’s rear door.
The decorative elements of the Subaru Ascent 2021 include chrome inserts, nameplates, and a compact notch for the license plate. The bumper finishes the rear review, part of which the designers decided to paint in the color of the body, and the other part is made of black plastic. Under it, there are two compact exhaust pipes. The roof of the car boasts side rails, a panoramic roof, which received a sliding front end, as well as a small antenna in the form of a shark’s fin.

The Japanese SUV interior has the traditional style of the brand, but the best materials are used here. The novelty has received finishes in leather, quality plastic, metals, and even wood. However, all this is only for the extended version. In front of the driver is placed a 3-spoke steering wheel, behind which is installed a classic analog dashboard and a small onboard computer.

The dashboard is quite stylish. It starts with a compact visor, which hides the “onboard computer” display underneath. Below there is room for a full 8-inch StarLink entertainment center display, which also allows you to make various settings of the vehicle’s functionality (the basic versions are only a 6.5-inch display). 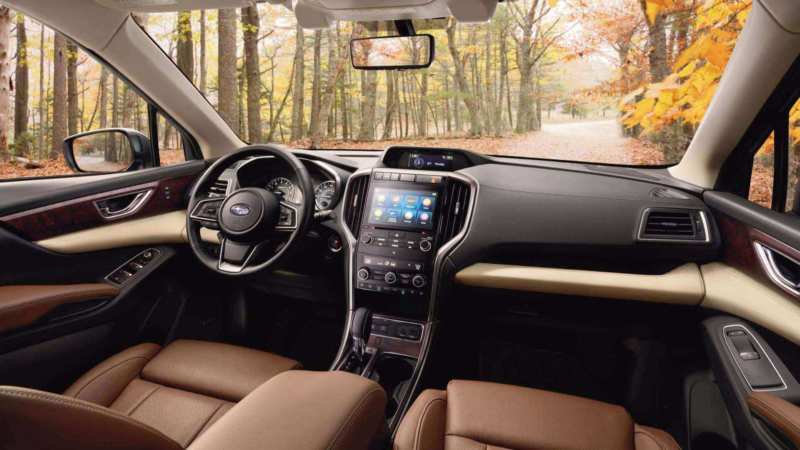 There are no questions about the system. It works well and has good graphics. On top of that, the multimedia system now supports Apple CarPlay and Android Auto, which was very lacking before. Next, the panels, which have analog buttons and washers, were not spared. At the very bottom, you can notice a small compartment for things. The tunnel, which is placed perpendicularly to the torpedo, catches the eye right away. It has a gear selector, cup holders, some technical elements, and a high armrest, inside which there is a refrigerator.

Interestingly, the Subaru Ascent boasts as many as 19 cupholders located throughout the cabin. In addition, there is an option to install rear displays. 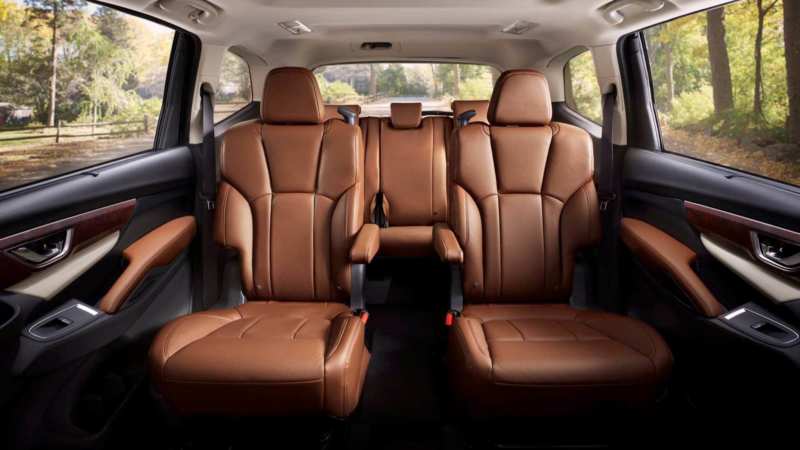 The new Subaru Ascent has a roomy interior that seats from 5 to 8. Every seat has received leather trim, soft filling, heating, as well as electric adjustments. The “Japanese” boasts a ventilation function, separate armrests, adjustable headrests, and other options that increase the level of comfort. And Americans love it as much as they love big SUVs. In general, there are two 3-seat sofas in the back. Still, as a different option, you can install two separate seats, so the cabin will be able to accommodate only seven people already.

There will be no space limitations in either row. The middle row can offer more space than the Teramont, but the third row loses 5 centimeters. The second row has two USB ports and its climate system. The trunk of the Subaru Ascent 2020 of the new generation is not conventional at all. Even with all seats, the crossover has a 555-liter luggage compartment. However, it is also possible to remove the rear rows, which will achieve an almost flat area and increase the volume to 2,055 liters of usable space.

The Subaru Ascent’s specifications allow for only a single gasoline-powered engine. Under the hood of the Japanese crossover has a 4-cylinder oppositional 2.4-liter FA division engine, which has a twin-scroll dual-flow compressor, intercooler, direct fuel injection, technology that knows how to change the phase of timing and unchanged piston stroke.

All this allows the engine to generate 260 “horses” (376 Nm). In just 7.4 seconds, the car accelerates to the speed mark of 100 kilometers per hour. Fuel consumption of the Subaru Ascent is 12 liters of fuel in city mode and 9 liters per 100 kilometers on the highway. 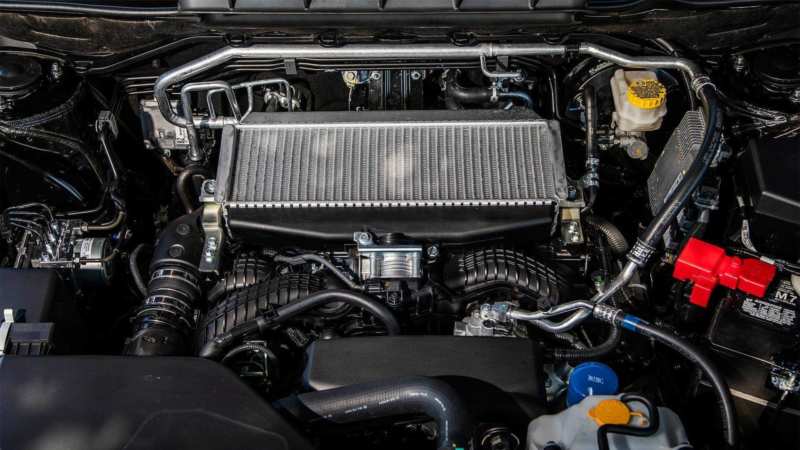 Already the basic version of the new Subaru Ascent 2021 has a Lineartronic V-belt variator with simulated eight gears. It can also be controlled using paddle paddles. There is also the signature Symmetrical All-Wheel Drive transmission.

By default, the car boasts electronic X-Mode technology, which helps during off-road driving, and an Active Torque Vectoring system, which starts functioning on asphalt (used on WRX STI). Electronics allow the crossover to enter a turn correctly. As you can see, the technical characteristics of the Subaru Ascent 2020 are impressive.

The basis for the Subaru Ascent Japanese engineers decided to choose a modular “bogie” SPG, implying a longitudinally oriented motor and a carrier body, the structure of which has a large proportion of high strength steel. A similar platform can be seen on the XV and Impreza. The car boasts independent suspension “around the circle.” The front part is equipped with McPherson-type suspension, and the rear – the multilever system.

There are anti-roll bars, passive shock absorbers, and steel springs throughout. Despite the large dimensions of the car, it steers quite well and has a rack-and-pinion type steering with electric power steering. The braking system is equipped with disc mechanisms on all wheels (front – ventilated), complemented by ABS, EBD, and other modern techniques.

Since the Japanese are positioning their car as a family car, they have equipped it with a solid list of safety and comfort systems. Thus, the safety level of the Subaru Ascent boasts:


The Japanese car is able to compete almost on equal terms with many models of its class. Japanese Toyota Highlander, Toyota Land Cruiser Prado, Mazda CX-9, Ford Explorer, German Volkswagen Tiguan, Korean Hyundai Santa Fe, KIA Sorento Prime. Each car has its strengths and weaknesses, so you should choose it based on personal preferences. Also, you should not forget about the different price policy of crossovers.

What can be said at the end? Subaru Ascent 2021 can hardly be called the best car in its class, but looking back at the price tag. Those who do not need a screaming exterior and appreciate comfort, functionality, quality, and reliability – should pay attention to the “Japanese.” The car has a good power plant, an all-wheel-drive system, and a good ground clearance, allowing users not only as a city model. It is also suitable for families and those who appreciate active recreation and tourism.

For its money, the car is not bad, but the competitors look more attractive. Too bad, but the Subaru Ascent is more focused on the American market. Domestic drivers have to buy and bring the SUV using the services of gray dealers. However, there is hope that in 2021, the model will still be able to officially enter the Russian market. 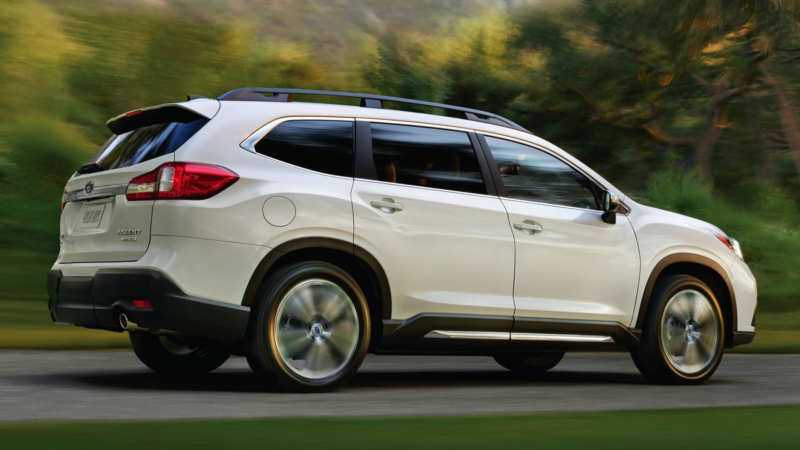 We suggest you read the article: History of Subaru 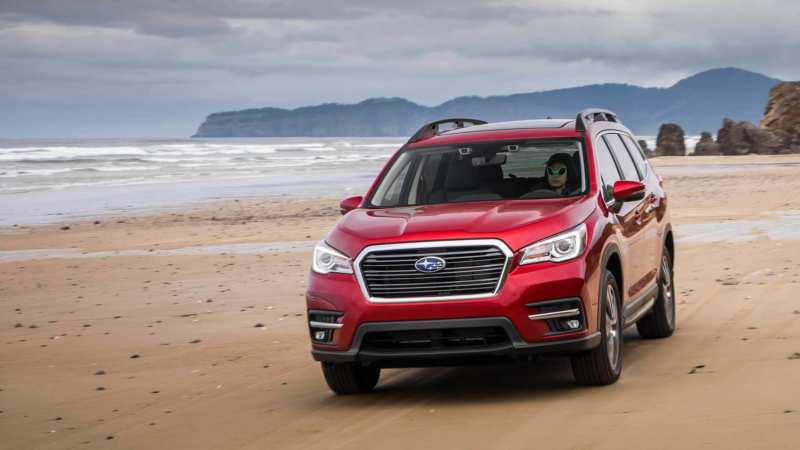 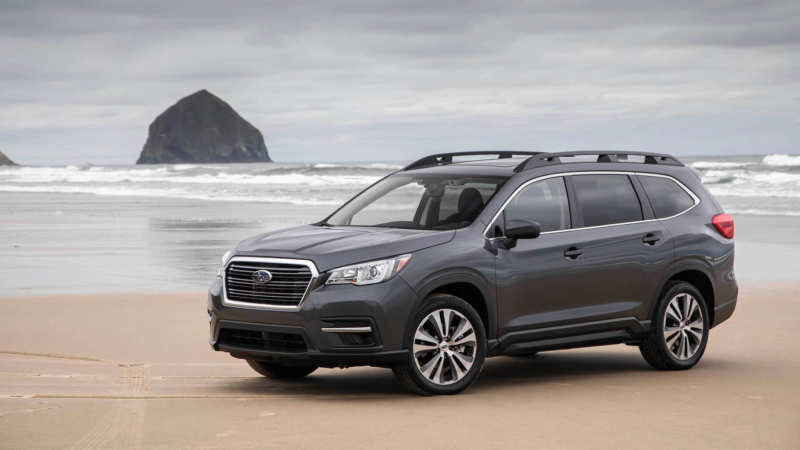 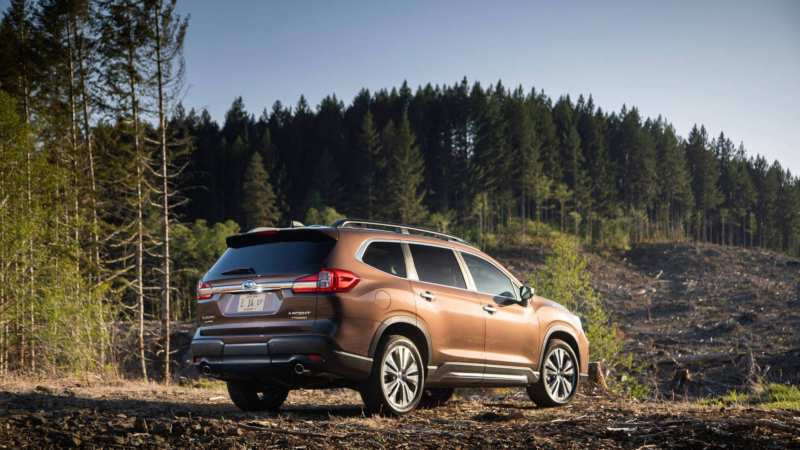 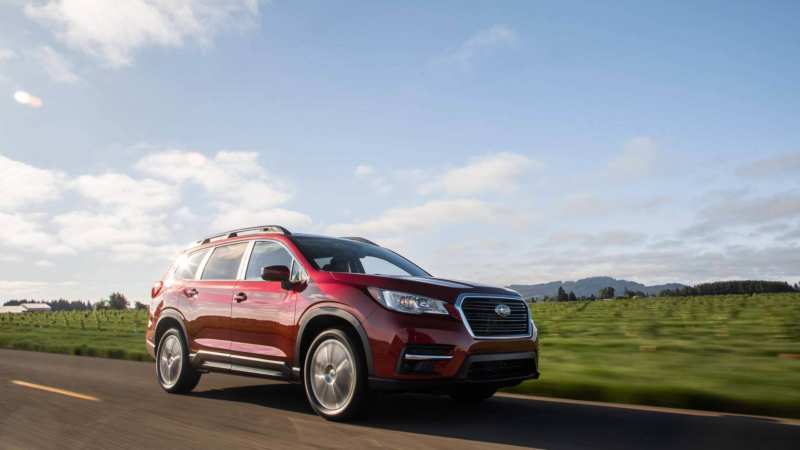 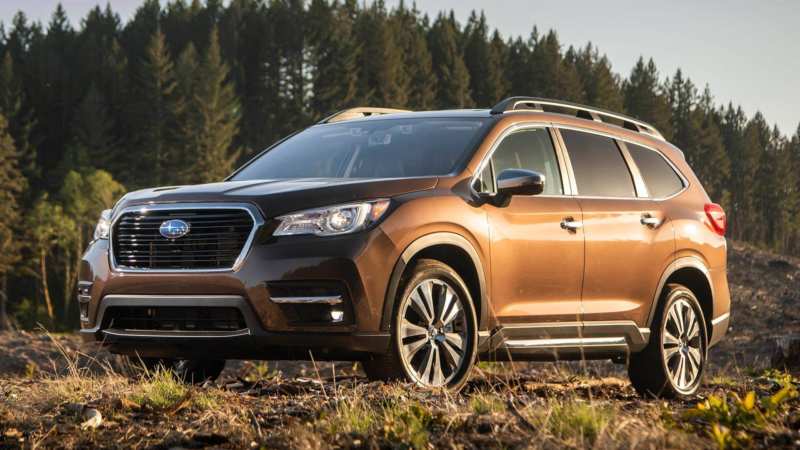 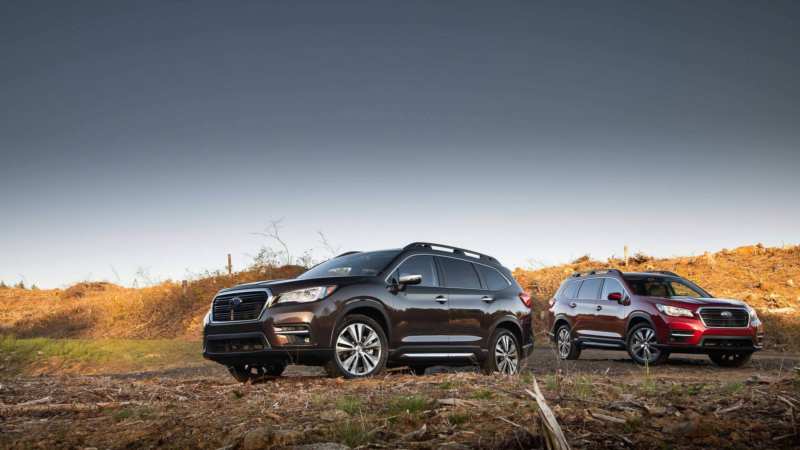 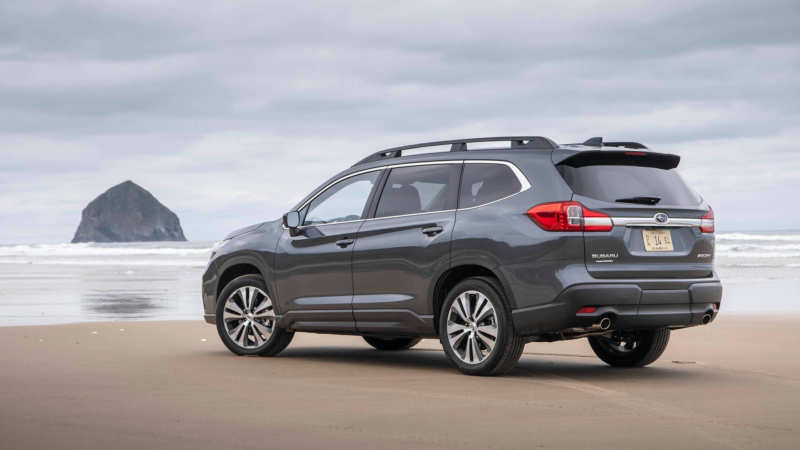 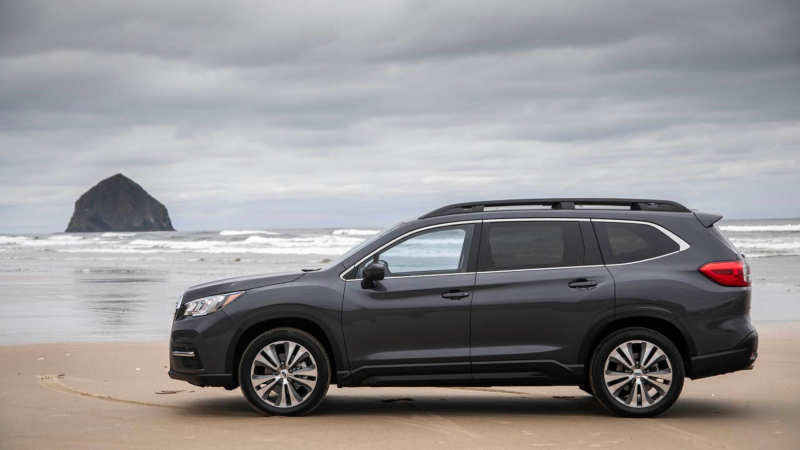 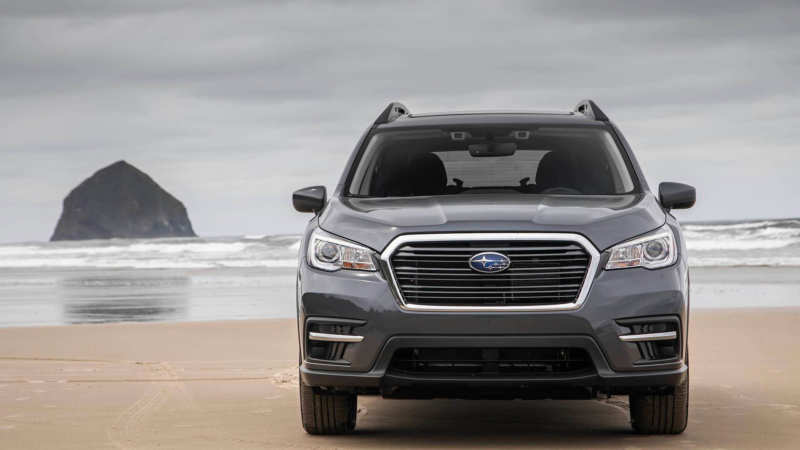