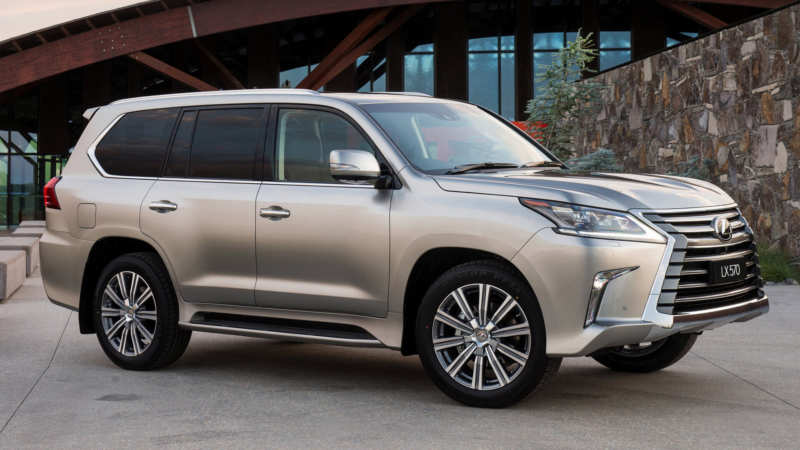 Lexus LX is a four-wheel-drive luxury Japanese full-size niche SUV, which is simultaneously the “commander-in-chief” of the Lexus model list. The latter represents one of the benchmarks of luxury and comfort, but at the same time, does not neglect the abilities of a true off-road model. The debut Japanese model was built on the Toyota Land Cruiser platform and was introduced in 1996.

The last 3rd generation Lexus LX 570 was presented in April 2007 during the New York Auto Show. After that, the Japanese SUV was updated in 2012 during the Detroit Motor Show. But the last restyling caught the “Japanese” in August 2015. It happened during the automotive elegance contest in Pebble Beach. A group of Japanese designers and engineers worked a lot on their child’s appearance, interior, and technical parts. But let’s talk about it in detail. The whole model range is Lexus.


What did buyers appreciate most about the Japanese SUV? It is dimensions. The Japanese perfectly understood this and, for this reason, decided not to change this parameter in any way. Paying attention to the photos of the new Lexus LX 570, we can notice that the updated body has become more formidable than its predecessor. Experts have decided to add more elements of chrome. In addition to this, Lexus LX 570 SUV can boast of more aggressive bumpers and some completely different design solutions.

Like the previous version, the novelty is equipped with a high muzzle with many decorative elements. The hood lid, with which everything starts, was decided to place here without a slope. It stands out with a mass of relief, which has received deep recesses, large protrusions made in the form of strips. The entire central part of the Lexus LX 570 2021 engineers decided to allocate for the radiator grille, which has many corners. Numerous fans of the Japanese company are familiar with the similar. 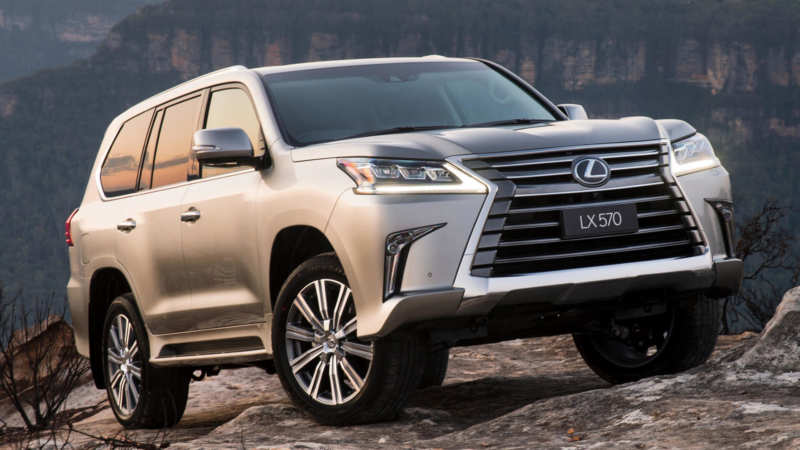 The grid has been significantly improved here, which has become more interesting and smaller. As for all the air intake system components, it was decided to paint them only in chrome. Near the top of the grille, there is a place for fairly massive headlights, which only add to the exterior of the car’s aggressiveness. Inside, the headlights will be only LED stuffing, providing the best illumination of the roadway in any situation. The Lexus LX570 will be equipped with several decorative and useful elements.

The potential buyer will be interested in additional cutouts in the body placed on the sides (necessary for the flow of cooled air to the front brake system). Not without a lot of relief, the lion’s share is placed in the center of the LX570. The side part also looks very solid. There are no unnecessary elements. A lot of space is allotted to the windows, arranged in a rectangle, framed either with a black line or a chrome one. 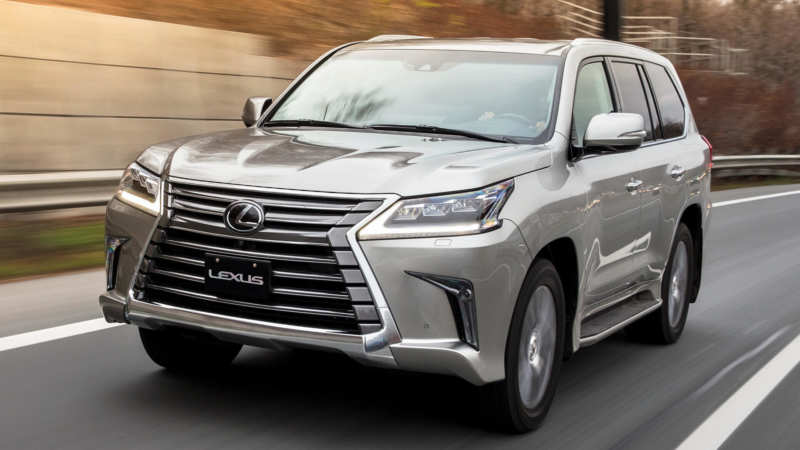 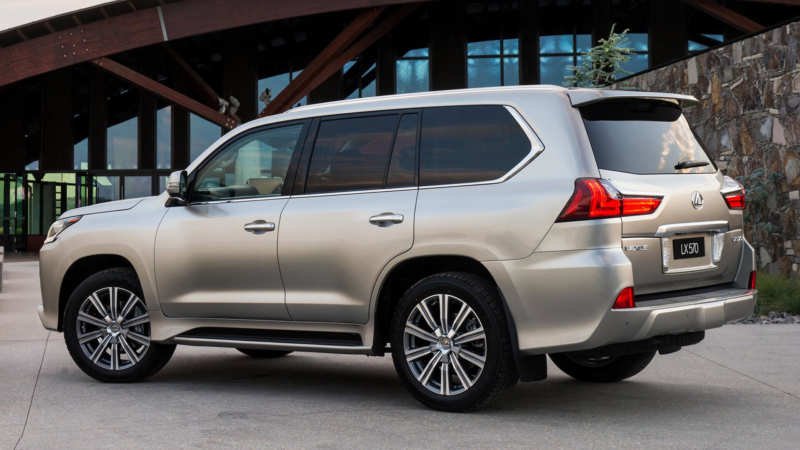 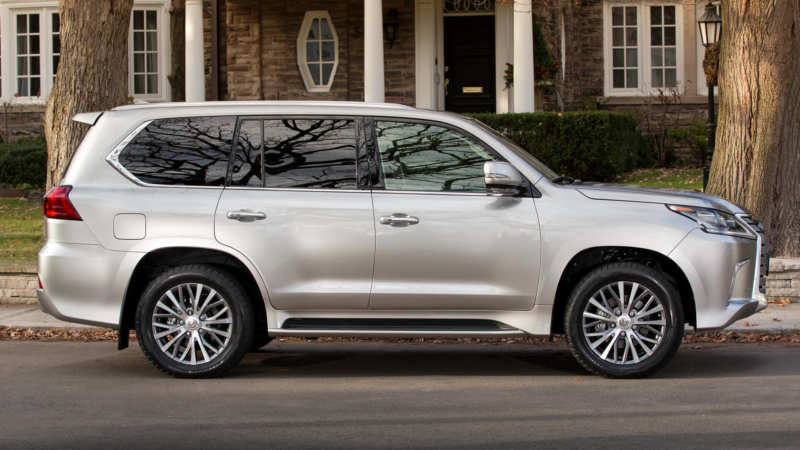 Similar colors are also provided for the massive side mirrors, which are now equipped with a rectangular shape and turn signals in every version. On the side, the massive doors, which have received some relief and the handles painted in chrome, are also striking. On the lower body of the Lexus LX 570 2020, huge wheel arches can be seen, as well as nonretractable or retractable running boards. The rounded-square wheel arches feature stylish 20- or 21-inch lightweight alloy wheels.

The ground clearance height is 226 millimeters, which is quite a good result. Moreover, ground clearance can increase or decrease by 70 and 50 millimeters, respectively. The stern of the Japanese SUV was also slightly changed. It is still placed at right angles to the road and has a large luggage compartment door.

The stern boasts a long visor that continues the roofline, stop lights, a trunk window, new outline headlights of an unusual type, several chrome inserts, a small quality of relief, and other decorations. The bumper surround seriously protrudes outward, which creates a step that facilitates access to the luggage compartment. There are only fog lights. The Japanese decided to install the exhaust system in the basic version under the body and the spare tire with towbar mounting.


Speaking of the interior, the Japanese car has always had a premium interior trim. Nothing has changed over time, so the “Japanese” has a great interior, created so that the owner and passengers experience only positive emotions during any trip. This includes fine leather trimming, a multifunctional multimedia system, very comfortable seats, and a rich list of additional equipment. We should also not forget about the aluminum inserts.

The driver is welcomed by a three-spoke multifunction steering wheel, partly made of wood. A significant part of the sensor control elements of the onboard systems has been moved. Further, there is an informative analog-digital combination of the instrument panel. In addition to this, the new Lexus LX570 2021 can display important information on the windshield. 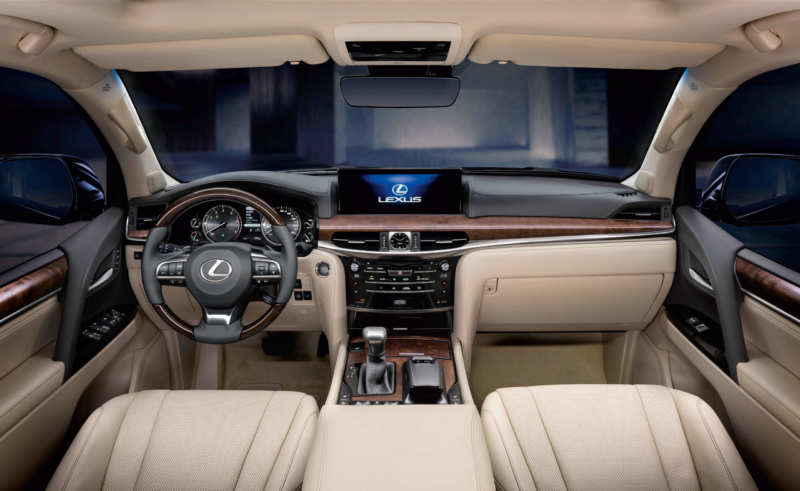 An integrated 12.3-inch screen of the multimedia complex on the central console supports touchscreen control and a navigation system. There is a place for the traditional stylish clock. The engineers have placed many controls not only on the entertainment system but also on the climate concierge. Also, there are a lot of keys in the tunnel. It is a leather touchpad with the keys for the multimedia system. There are also controls for off-road systems, air suspension, as well as heated and ventilated seats.

The new Lexus LX570 2021 has a choice of seat trim colors and the entire interior, which allows you to fine-tune the Japanese car for almost anyone. 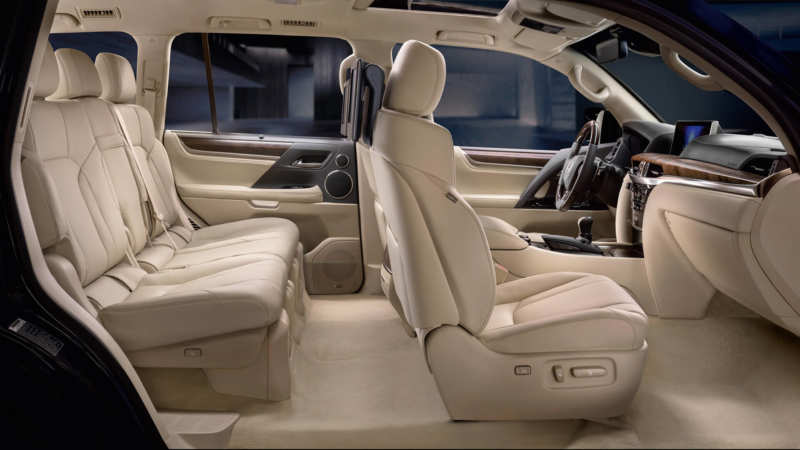 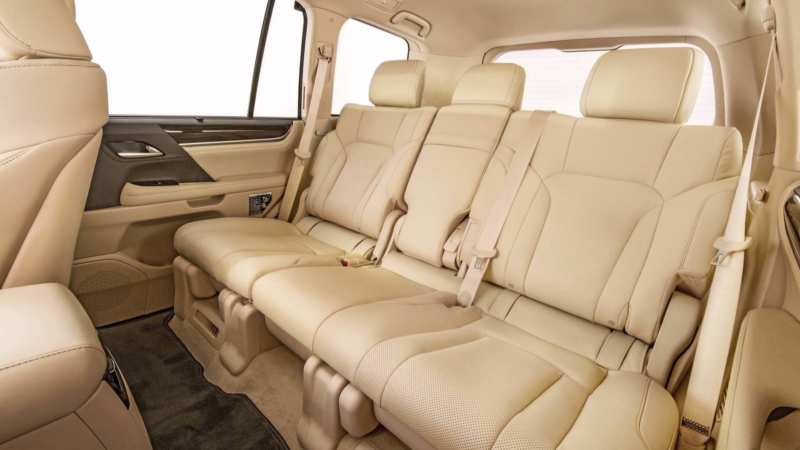 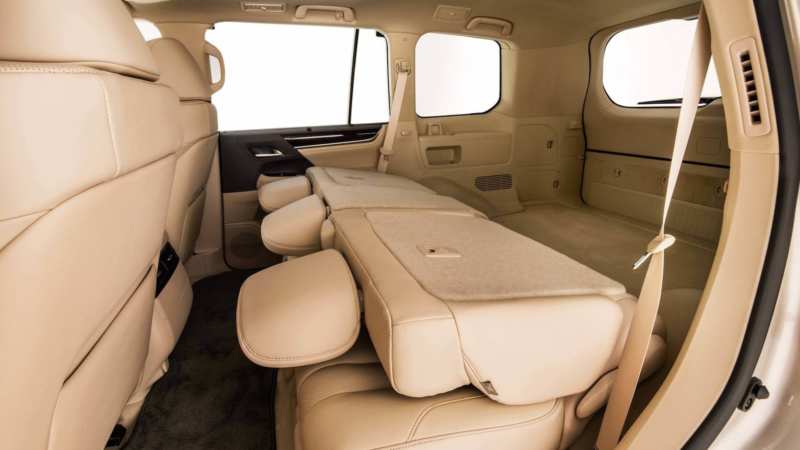 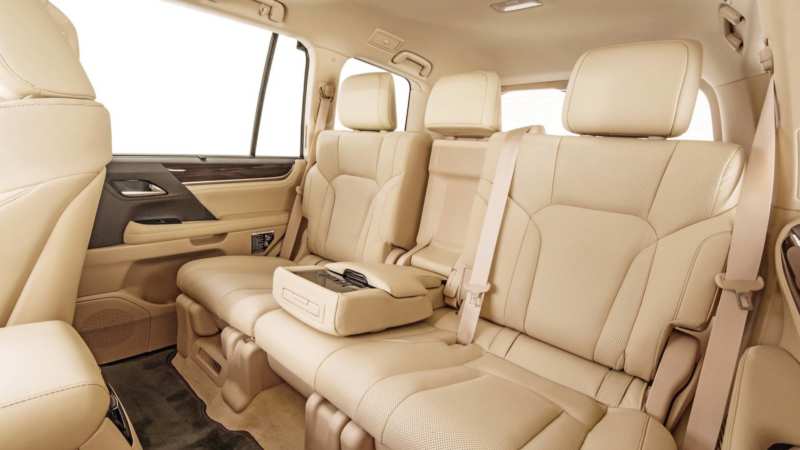 The interior of the massive Lexus LX 570 SUV looks modern, more beautiful, and ergonomic. There is even a third row of seats and seven seats. However, if there is no such need, it is possible not to place the 3rd row of seats. The front boasts large upholstered leather seats with electric adjustments. There is a lot of space in the back row, even if three adult passengers are seated there.

Rear passengers get massive displays of the multimedia system, armrest, built-in buttons to adjust seats, climate control, and remote control, which allows you to control the music system. With the installed third row, one should not count on the abundance of comfort and free space. The luggage compartment is huge here, but if the third row is installed, it will receive only 258 liters. Still, without the third row, this number increases to 1,274 liters of usable space. As we can see, after updating, the interior of Lexus LX570 became even better, more comfortable, and richer.


In addition to the large size, quality and comfortable interior, the owners of the “Japanese” appreciate this SUV for its engines, which have high reliability. In addition to this, the engines are very powerful. Japanese have provided for its novelty petrol and diesel engine. The role of the diesel engine is performed by a V-shaped 8-cylinder turbocharged 4.5-liter power plant, which can develop 272 horsepower (650 Nm). 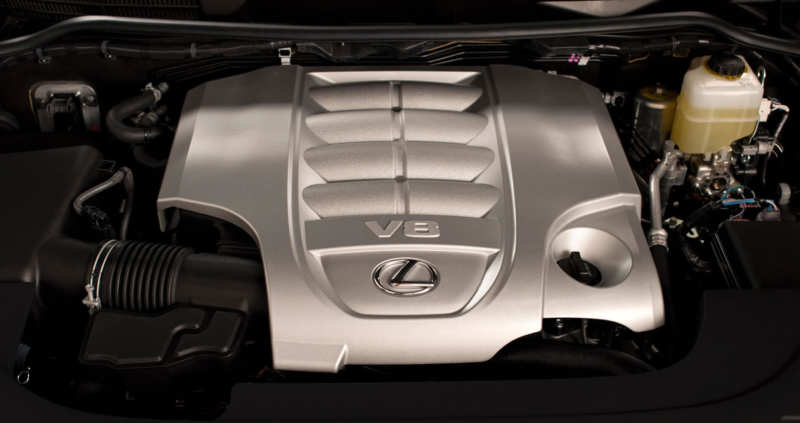 Next up is the V-shaped 5.7-liter, 8-cylinder atmospheric powerplant, which runs on gasoline and has a distributed fuel injection system. It generates 383 horsepower (548 nm). Such variant allows spending 7.7 seconds to conquer the first hundred, and the “maximum speed” will be at the same level. But the gasoline version will consume at least 20 liters of gasoline in the city mode for every 100 kilometers. In the city, the consumption can be reduced to at least 15 liters.


The engine is equipped with an 8-band automatic gearbox and all-wheel-drive system, which has a symmetrical differential, which by default divides the torque between the axles in the proportion of 50/50. In addition to this, Japanese engineers provided Multi-terrain Select technology responsible for off-road driving modes. The pre-reform cars had a six-speed automatic transmission.

The updated Lexus LX570 is a real off-road vehicle. It is not a ford problem, the depth of which can reach up to 700 millimeters. The height of the obstacle, causing the rear wheel’s tear, reaches up to impressive 630 millimeters. The Angles of departure and entrance of the vehicle are 20 and 29 degrees, respectively. The angle of cross-country ability is 23 degrees.

The Japanese engineers decided to use a powerful ladder-type frame made of high-strength steel as the base. The car has a body height adjustment system, as well as hydropneumatic adaptive suspension AVS. The front end is equipped with double wishbones and the rear end with a 4-lever dependent structure. It is easy to drive such a large car due to hydraulic power steering with variable characteristics. The braking system is equipped with ventilated disc brakes on all wheels, which work with ABS, BAS, A-TRC, and EBD.

Since it is a luxury car in front of us, it also fully meets its status in terms of comfort and safety levels. The safety of the Lexus LX570 boasts:

In addition, the car was made of high-strength steel and has preprogrammed deformation zones that are designed to reduce the impact energy during a collision.


To acquire a Japanese off-road model can actually wealthy people, since the cost of the machine is very large. The price of the Lexus LX570 starts from 6,411,000 rubles for the basic configuration, which already has: 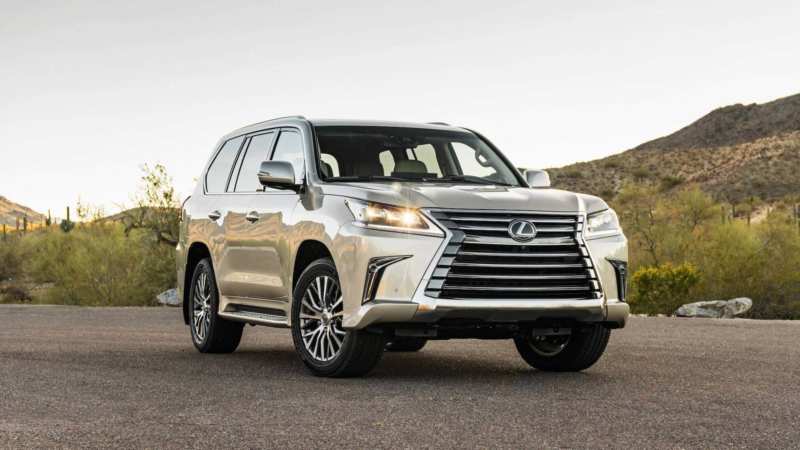 The most expensive variant of Lexus LX 570 will be not less than 7,515,000 rubles. In addition, it already boasts:


The “Japanese” has a lot of competitors, but it manages to successfully hold on to the world market for many years. The new Lexus LX570 2021 can compete with Chevrolet Tahoe, Range Rover Sport, Cadillac Escalade, Audi Q7, Jeep Grand Cherokee SRT8, Infiniti QX80, Mercedes-Benz GLS, BMW X7, as well as Nissan Patrol and Toyota Land Cruiser.


This article showed that the new Lexus LX570 2020 is a chic SUV, created for wealthy family people. Despite the fact that it is quite a heavy car, the “Japanese” has good dynamic characteristics. However, it is still not a sports car. Lexus LX 570 is well suited not only for city driving, but also for off-road driving. For this there is a powerful engine, a good gearbox, high ground clearance and permanent all-wheel drive.

Inside, the Japanese model will please you with an abundance of space, quality assembly, comfortable and convenient interior, which you will not want to leave. Even today, the appearance of SUVs stands out quite seriously. The car looks powerful, stylish, and modern. The Japanese have repeatedly proved to the world that they can make quality SUVs. The updated Lexus LX 570 is a vivid example of that. 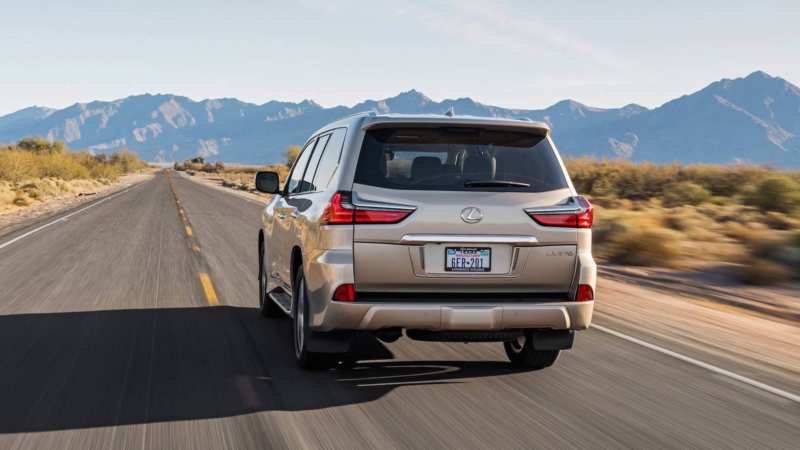 We suggest you read the article: History of Lexus 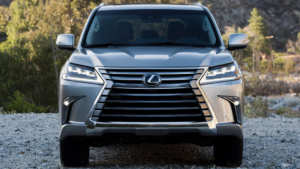 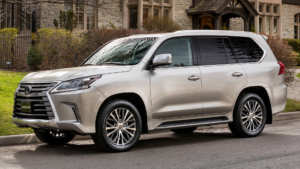 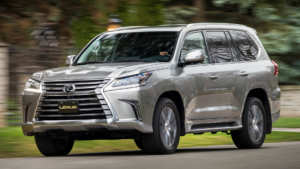 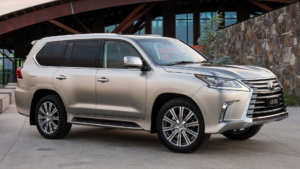 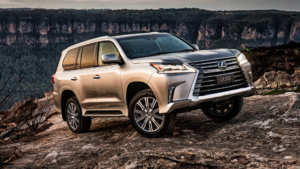 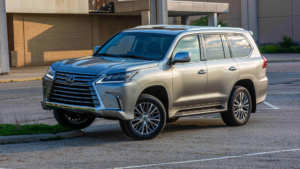 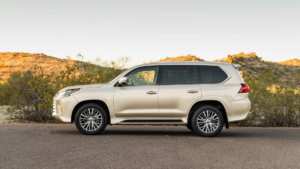 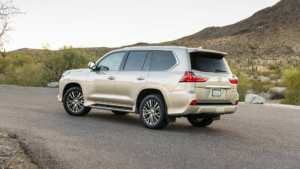 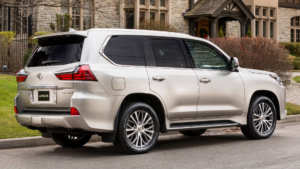