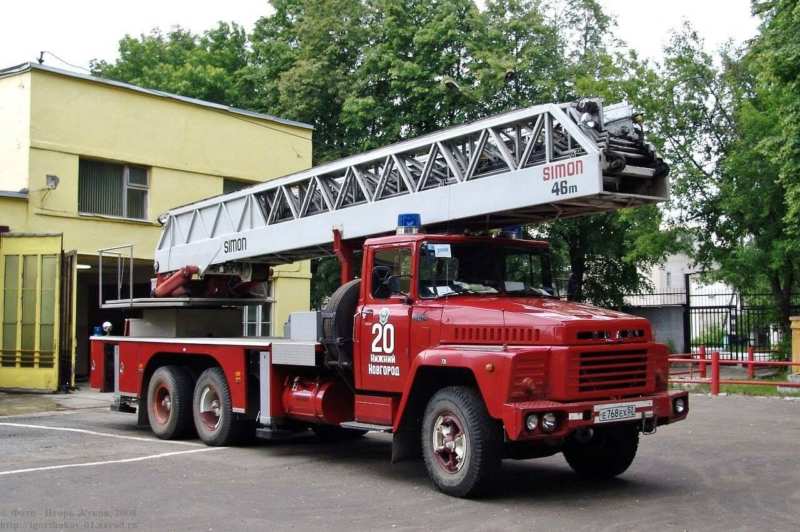 KrAZ-250 is a heavy duty truck. The vehicle was produced from 1978 to 1992. Its production was carried out by the Kremenchug automobile enterprise. The body of the vehicle is represented by a platform with opening rear and side sides. Standardly, different equipment was mounted on the platform, together with the bodywork, and flatbed models are rare enough.

In addition, a truck tractor was produced, which was based on the KrAZ-250 platform. Very often I came across a truck with a modification of a hoist, truck crane and concrete mixer. To date, the plant no longer produces this model. The whole model range is KrAZ.

The history of the truck takes its origins back to the 1950s. From the beginning of development to the start of serial production has passed, not much – not a little, 20 years. The need for technically advanced, comfortable types of heavy special vehicles has matured since the late 1950s, but the full-scale production of the simulated truck was hindered by the dependence on the contacting companies-suppliers of the required components.

Only after a couple of decades the KrAZ trucks of the new 250 series could be produced. The transport model under consideration, which was produced at the Kremenchug enterprise from 78 to 92 years, was conceived and created as a unified vehicle, the chassis of which can be used for mounting various types of special equipment on it. 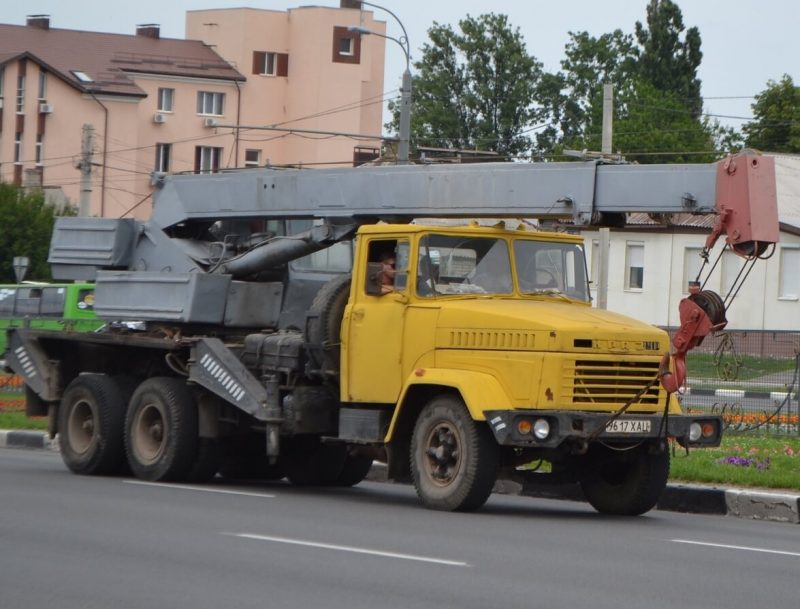 Cargo truck KRAZ-250 can be attributed to the types of special equipment that are used and developed today. It is clear that the machine is already outdated, but new units copy its options, although in a more modernized version.

For example, a car with a standard frame mounted on it can offer use with a flatbed, which, by the way, can be found in such a variant is quite rare. The truck is equipped with a chassis with a shortened variation of the frame, which was used to install cranes, concrete mixers and other installations on it.

Special equipment on the basis of the 250th KrAZ was able to find the widest use in mining and oil producing areas, as well as it is often used during construction and for military purposes. Therefore, the engineering and technological staff was able to perform the task of designing the original car. 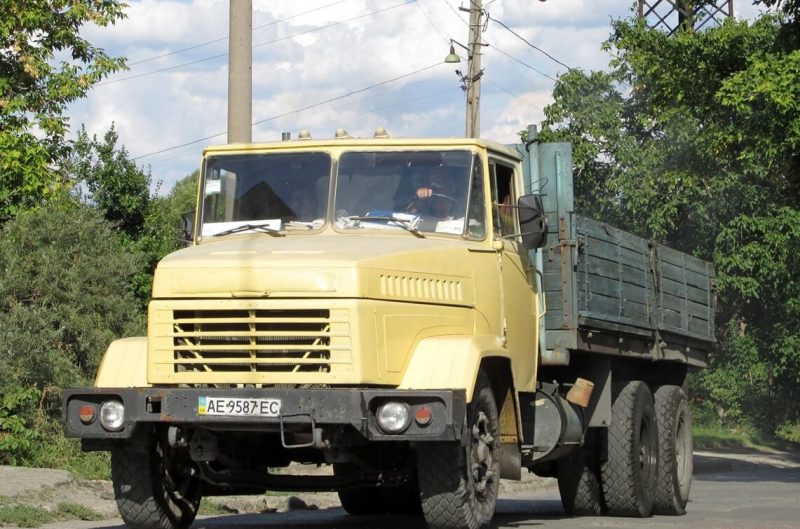 Important components are interchangeable, both in the various series of the company in Kremenchug, and with the types of machines of other companies, for example, MAZ-500A. As a result, 1978 allowed the company to produce chassis KrAZ 250, which can be a platform for many variations of modifications.

The 6×4 model was produced until 1992, and during this time the cabin was modified 3 times. In 1992, the Kremenchug automobile enterprise presented dump trucks KrAZ-6510 and KrAZ-6443, which became the next family of our truck. The KrAZ-250 itself became an upgraded version of the KrAZ-257.

The KrAZ-250 is a modification of the KrAZ-257B1A truck, which has not been discontinued even after the launch of the restyling model. Differences have affected not only the exterior (refreshed both inside and outside the cabin, a shorter hood), but also almost all the standards, such as fuel consumption and increase in mileage to 1 TO.

Our guest, in contrast to the previous model, has improved efficiency, acceptable speed and a sufficient level of comfort for the driver. But among the traditional qualities of the cars produced by the enterprise in Kremenchug is simplicity of use, endurance and reliability, just all this is in the 250th brand. 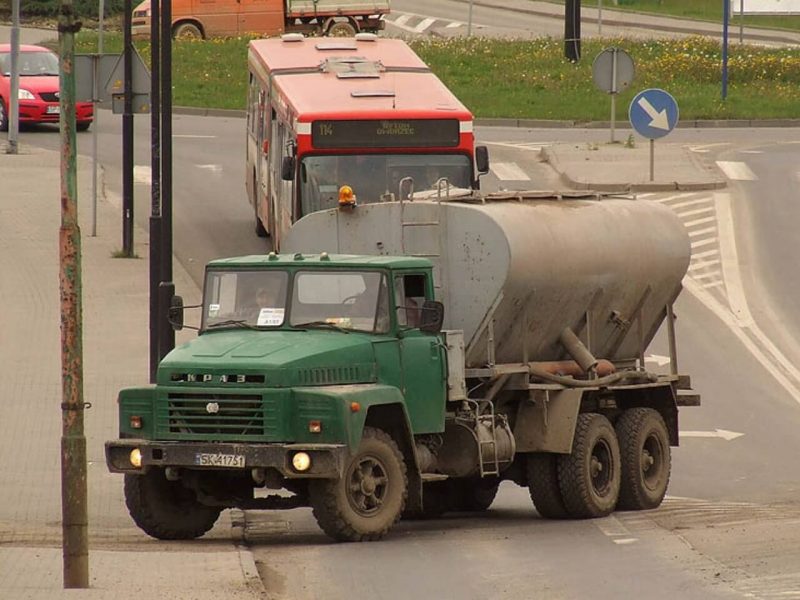 KrAZ-250 can function not only on the roadways with hard surface, but also where there are even dirt roads. Moreover, the car can be operated in different temperature conditions, from -40 to +40 degrees Celsius. This has made it an indispensable model, which helps in geographical areas where different climatic conditions are present.

The Kremenchug automobile plant has provided for the installation of a metal cabin, which is designed for a driver and a couple of passengers. The driver’s seat can be adjusted to its own growth and weight. Among the comfort organs it is possible to allocate presence of system of heating, blowing-off of windows by a stream of warm air, the mechanism of clearing for windshields, mirrors of rear visibility, the fan, descending glasses, rotating vents. 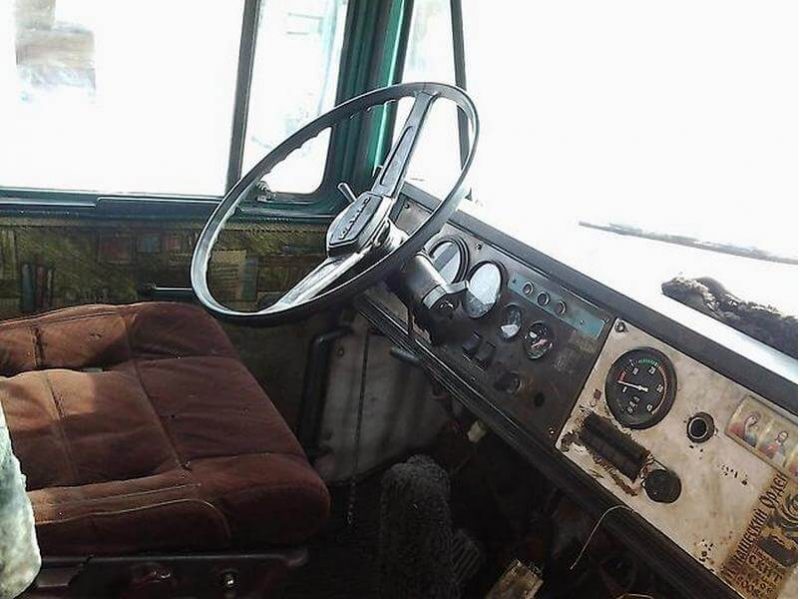 There is also a radio, a documentation compartment and a sun visor. The dashboard has indicators that tell the driver to switch between high beam, change in pressure in the air system receivers, oil level in the power pack and overheating of the cooling fluid.

Cabin and plumage of the truck on the chassis in four places, which allows you to highlight these elements in a separate design knot.

The truck was equipped with a V-shaped 14.86-liter V8 diesel engine model “YaMZ-238M2”. It allowed to develop 240 horsepower and worked on diesel fuel. This engine had an all-mode frequency regulator, low-pressure pump, which had the option of fuel pumping, and a fuel injection advance coupling. In addition, the engine had a preheater and dry air filter, where there was an indication of clogging.

YaMZ-238M2 engineIn the light of the innovations, it is possible to note the presence of an improved cooling tubular-ribbon radiator, which replaced the former tubular-plate radiator. High-pressure fuel pump (HPMP) is represented by an eight-section slide valve type, where there is a low-pressure fuel pump. 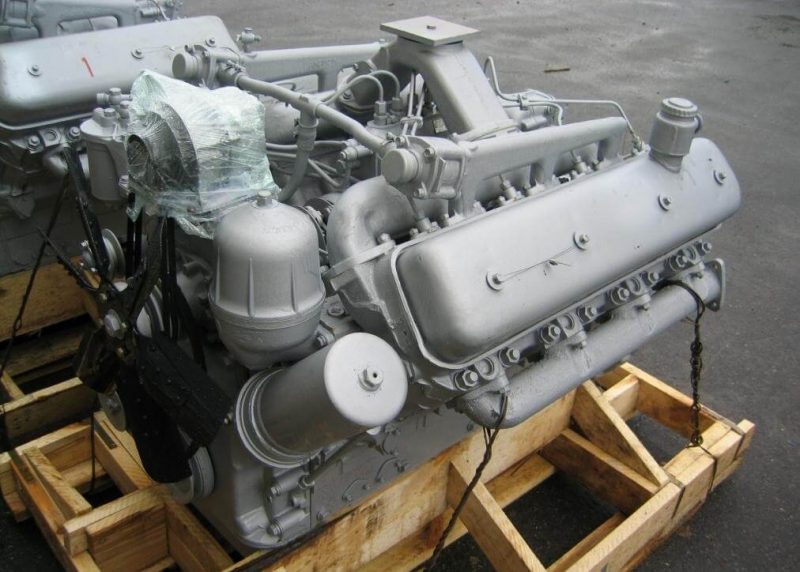 Flashlights have a closed type. The motor allows to accelerate such heavy car to 80 km/h, to overcome lifting with a bias of 35 degrees. The average appetite of the engine is about 35 liters per 100 kilometers.

The machine comes with a pair of fuel tanks, each with a capacity of 165 litres. The KrAZ truck crane works perfectly with such an engine, and there is no lack of power.

The design of the KrAZ-250 truck provides for the installation of a dry double disc clutch YaMZ-238, which has peripheral springs and a mechanical release drive, as well as a three-way five-stage mechanical gearbox YaMZ-2 36N. It has synchronizers at the second, third, fourth and fifth speeds.

There is also a transfer case, where there are a couple of stages of operation, as well as the inter-axis differential with the ability to block. All this significantly increases the speed of the truck. The transfer case is switched mechanically, differential locks are switched on pneumatically. There are 3 cardanic speeds.

The main braking system is a dual-circuit pneumatic actuator together with drum mechanisms. The system is operated on all wheels. The first circuit provides the work of brakes to the intermediate and front axle, and the second – to the rear. Reliable reliability is guaranteed by parking and spare brakes, which also increase the technical component of the truck.

The parking brake is represented by a transmission brake, which is mechanically driven. It acts on the rear axle. The system described has an alcohol-type fuse, together with a water separator, which prevents the condensate from freezing.

It is able to optimize the function of the functional unit, which allows you not to worry about its reliability, even in severe frost. The machine has received the presence of diskless wheels, which are similar to those used on MAZ cars. All wheels are equipped with only drum brakes.

It is represented by a screw with a ball bar as well as a hydraulic power steering system, which greatly facilitates turning. The minimum turning radius of the machine is 13 meters.

The lifting device of the special equipment to be disassembled is located on a movable platform, and the boom has steel ropes and load-carrying devices. The design of the crane provides remote supports, which provide additional stability during operation. The maneuverability of the mechanism is provided by the wheelbase of the 250th model, which makes it possible to use the truck crane even in a limited space.

Moreover, it is possible to move the crane to any required area of the construction site. Load capacity of this model is 20 tons. The maximum height to which the boom can be lifted is 10.3 metres. The greatest lowering depth of the load is 4.4 meters. And the outreach of the described element – from 3.5 to 12 meters, depending on what equipment the crane is equipped with. 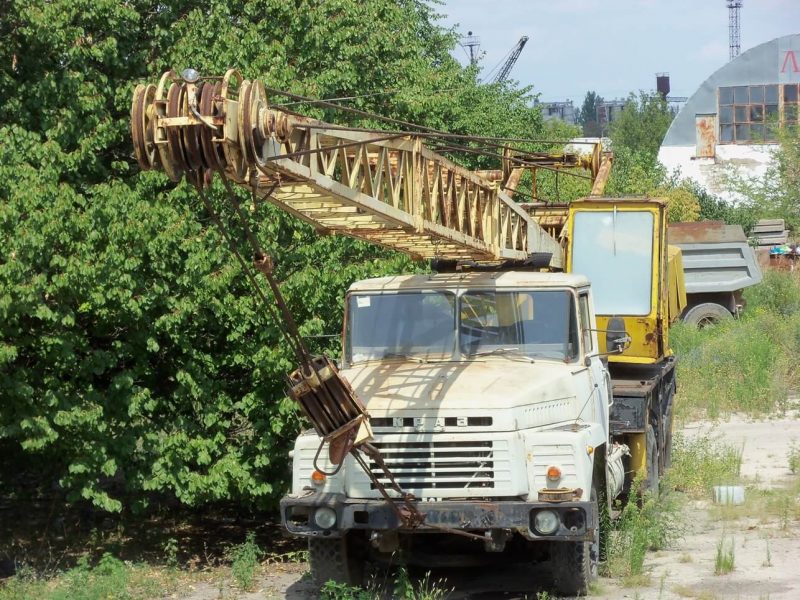 It is possible to purchase the basic version of the KrAZ-250 at a rather different price, which can be determined by its technical condition, year of production and mileage. Vehicles with later years of production will cost slightly more. Here the price will vary from 800 000 to 1 000 000 000 rubles. Individual copies can be sold up to 1,500,000 rubles.

Truck cranes on a similar chassis are sold for almost the same price. Given this, the price of our model is much lower than the version of foreign cars, where there are similar parameters. You can also rent a car with special equipment, the amount of rent per shift will be 12 000 rubles. 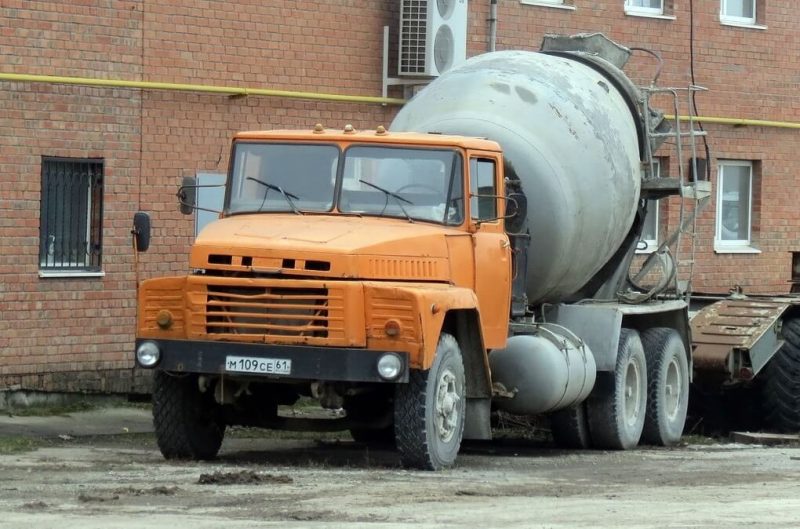 The KrAZ-250 truck can be called a well-proven vehicle, which for many years deserved the best reviews, as a solid and reliable unit, on which it is possible to move, transport goods over long distances, despite the difficult conditions of impassability. This type of machine has not lost its own relevance, despite the fact that it has been removed from production, which once again confirms that it is perfect for many aspects of construction and other industries.

The machine is also used as a crane, and quite often. This is partly due to its low cost compared to European models. The vehicle has good cross-country ability and a fairly high ground clearance, which allows it to pass and work where other trucks can get stuck. 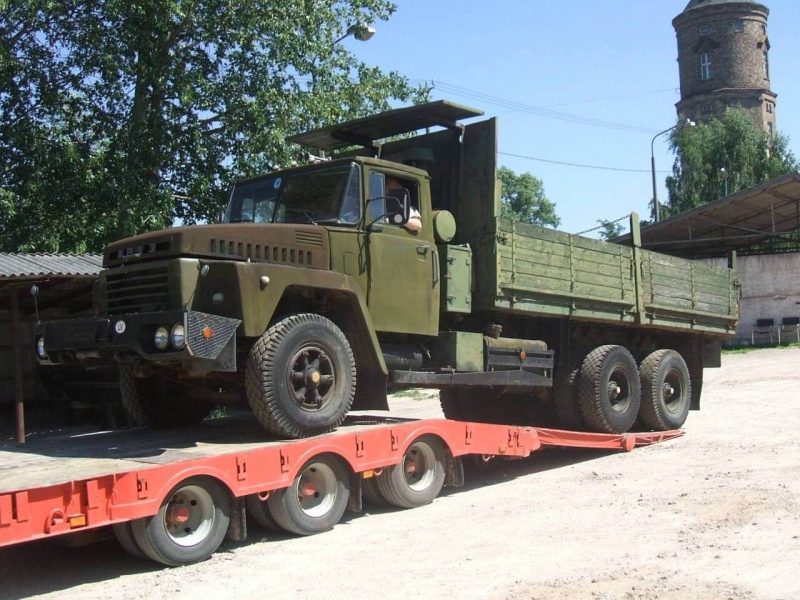 Not to say that KrAZ’s power plant is very powerful, but it copes perfectly with its duties, but it is very hungry. A high landing gives the driver a good visibility, and his seat can be adjusted mechanically. It is clear that the level of comfort is minimal, but do not forget about the price list, which is on this vehicle.

But the car is not afraid of works in mining and oil producing sphere, can work in rather wide climatic range and is not afraid to get dirty. The model managed to gain the respect of many drivers in the twentieth century, and even today, many years later, it continues to serve in many areas of application.

We advise you to read the article: KrAZ – history of the Kremenchug automobile plant 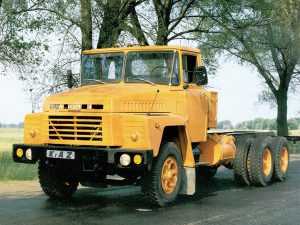 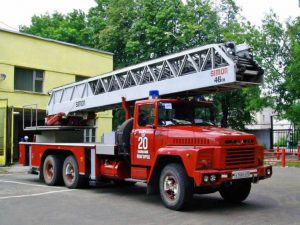 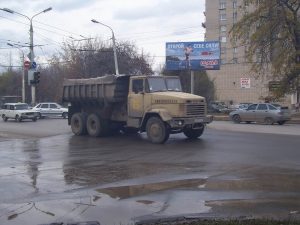 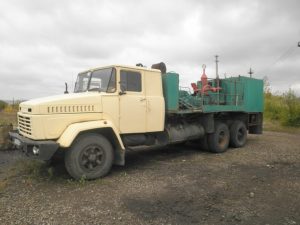 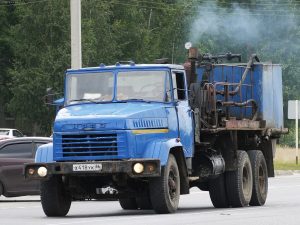 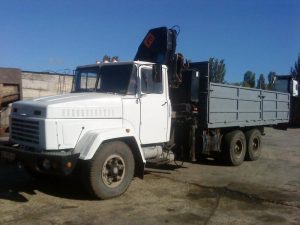 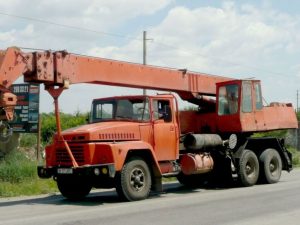 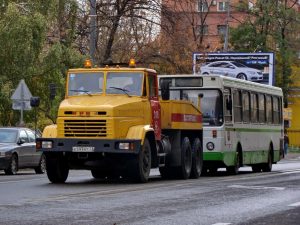 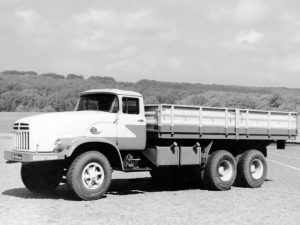 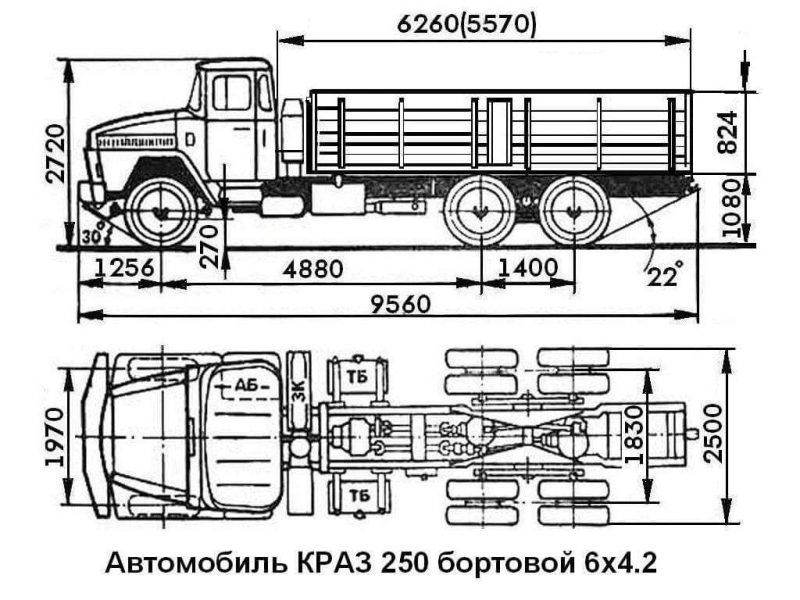