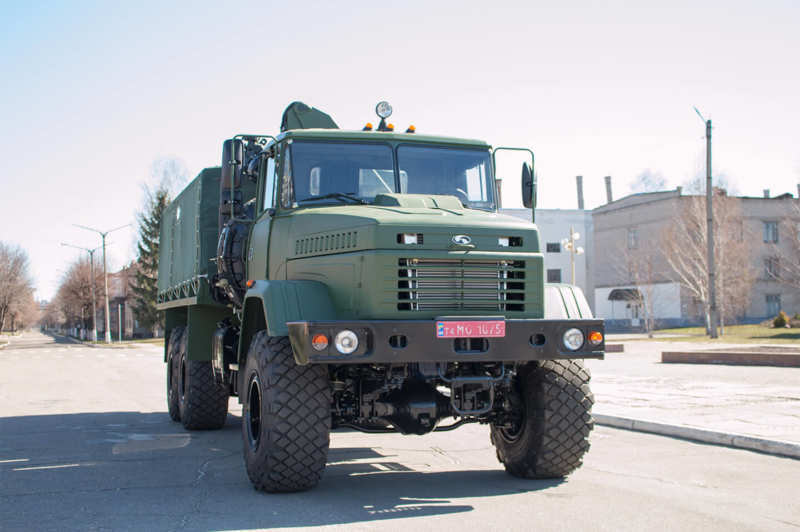 The KrAZ-6322 model serves as a flatbed truck, where there is an increased cross-country ability, which is intended for transportation of various cargoes and people, and towing of ordinary and special trailers, planes at airfields. The machine is able to work reliably in emergency natural, climatic and road situations on all continents. This article will describe KrAZ 6322 technical characteristics. The whole model range is KrAZ.

It has been produced at the Kremenchug Automotive Plant since 1994 until today. The model has replaced the rather popular KrAZ-260 model. Otherwise, the off-road truck is called “Soldier” (later and upgraded version). It is a multi-purpose flatbed truck with bonneted layout, increased cross-country ability and 6×6 wheel arrangement, as well as wide-profile tires with increased payload. 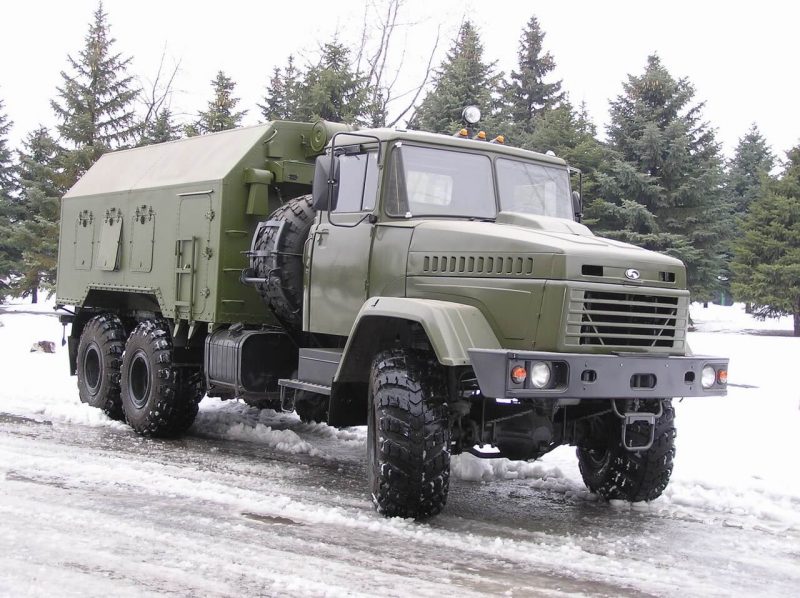 The KrAZ-6322 was designed for transportation of various cargoes, passengers, towing trailers and other special vehicles. The vehicle can be operated in any road area, where there is no road, rugged terrain and in extreme natural and climatic situations at a temperature of -45 to +50 degrees Celsius.
Buyers are often attracted by the low cost of this truck, its mechanisms, along with the equipment, which are distinguished by the presence of reliability and reliability in operation. There is also availability for monitoring and maintenance. 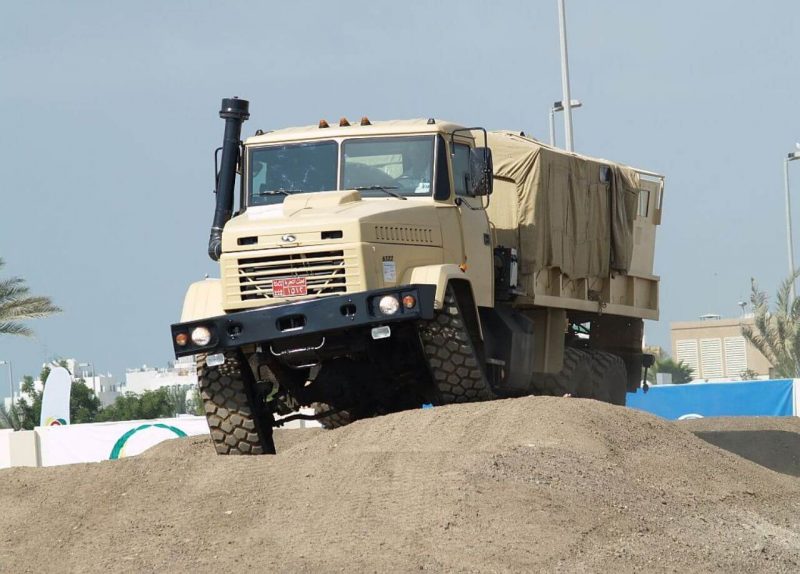 In the 1950s, the Union of Soviet Socialist Republics was recovering from the devastation caused by the war. The devastation affected cities, bridges and road sections. Moreover, the country began to conquer the Far North, together with Siberia and the Far East, to develop new deposits of oil, ore, gold and diamonds. The construction of giant enterprises, power stations, cosmodromes and ports was progressing rapidly.

In order to carry out these ambitious works on a large scale, trucks, dump trucks, timber trucks, refuelers and so on were needed. The army of the country demanded the installation of a new type of weapon. Therefore, since February 1958, they decided to create the Kremenchug automobile plant, where they were able to install the main conveyor, produce tooling, build new production sites and form an experienced team. 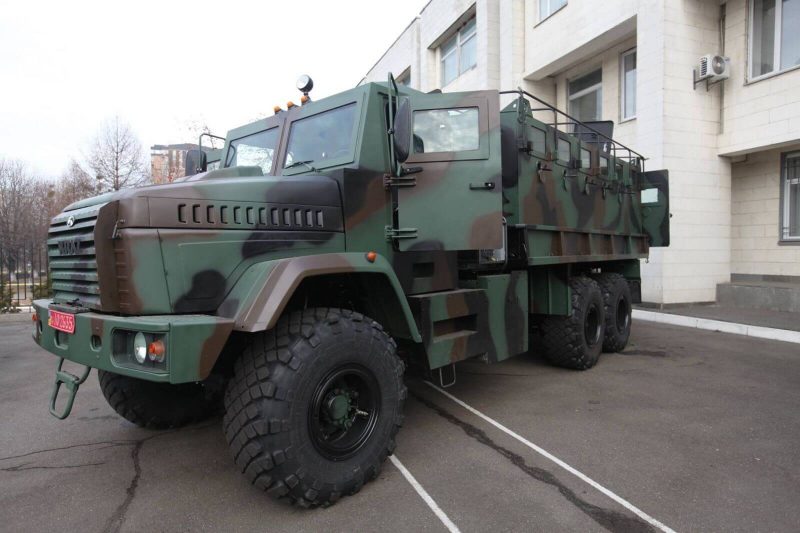 This made it possible to produce the debut truck in May of ’59. Years went by and the first models began to replace the newer ones. Thus, the 6322 model received 30 more horsepower than its predecessor, and the payload increased to 10,000 kilograms.

During these years, the Russian army already had its own vehicles, so they decided not to buy Ukrainian all-terrain vehicles, and for the Ukrainian army they were ordered in small quantities. The second breath came to the car thanks to the Iraqi contract, under which the Kremenchug automobile plant was to sell about 2,150 trucks there. 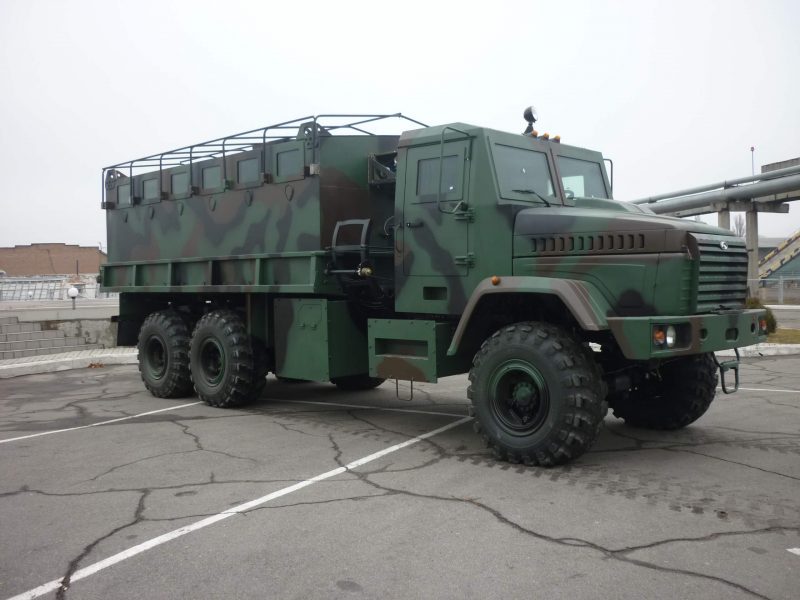 Our model can be compared to a good wine, which has only improved over the years, getting new and not losing its own old advantages. Excellent cross-country ability together with unbreakability are the main advantages of this vehicle, and the presence of a comfortable cabin and new electronic systems for it only improve the overall impression.

However, how can you give a sober assessment of the all-wheel drive vehicle without going to many kilometers of fields? The company’s management decided to construct a special polygon, which appeared not so long ago on the territory of the Kremenchug automobile enterprise. There was no need to leave the factory territory to check the new models.

KrAZ-6322 has a bonneted cabin layout. The driver’s seat is behind the power unit. Such a solution has its advantages and disadvantages. For example, it is easier to access the engine during its repair, but when driving on rough terrain, the hood slightly understates the visibility in front of the truck. The cabin itself is three-seater and is equipped with all the necessary equipment for a comfortable stay of the driver and passengers.

For example, there are comfortable seats (the driver has an air suspension) with settings, heating and ventilation systems. In addition, the driver can easily monitor all sensors and readings thanks to the compact dashboard. The downside is that the interior’s noise isolation is not perfect and simply needs improvement. 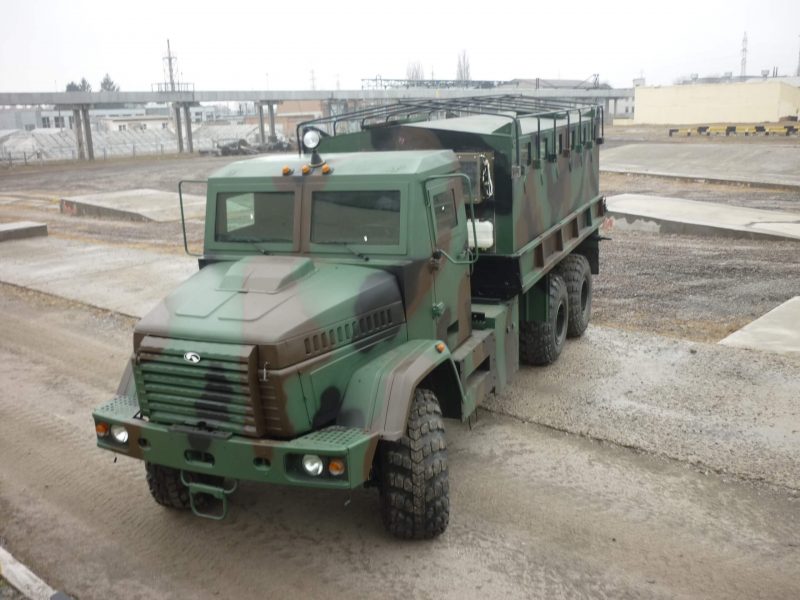 They decided to place a 14.86-liter V-shaped eight-cylinder turbocharged diesel engine YaMZ-238DU2 under the big hood of the all-wheel drive truck. As a result, the model already produces an impressive 330 horsepower. This engine is a four-stroke engine and has increased power by using turbocharger and corrector, which provides an opportunity to manually increase the fuel level through the inlet line, bypassing the power loss at low frequencies. 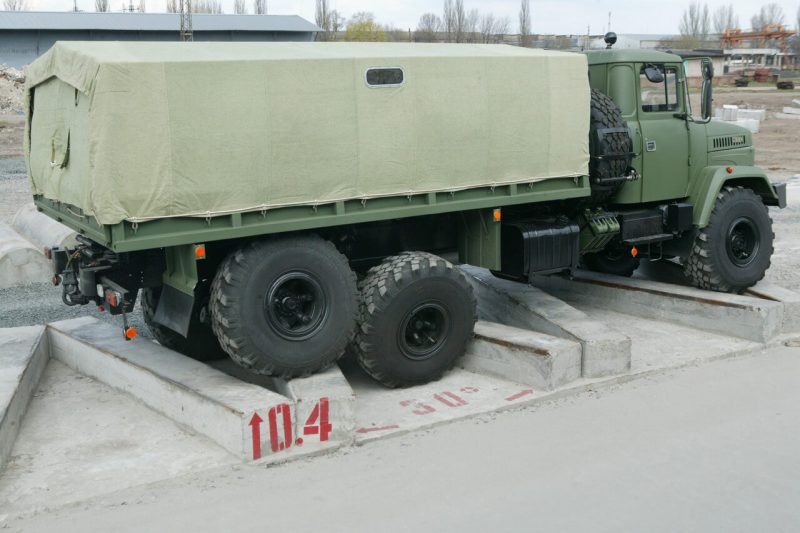 In addition, the design staff has provided for the installation of a Thermostart preheater, which is necessary for easier start of the engine at low temperatures. The exhaust mechanism does not have a silencer, as the energy of the gases is taken by an injection turbine. The model has a maximum speed of 80 km/h, which is a good result for such a car.

Each 100 kilometers of mileage engine consumes about 39 liters of diesel fuel. It is planned to install a pair of fuel tanks, the total volume of which is 500 liters. The power unit meets the European standards Euro-2.

Synchronized this powerful engine with a four-speed manual gearbox, which is synchronized at all speeds, except the rear. A double disc dry clutch is provided. The box is combined with a two-stage demultiplier unit with a pneumatic gearbox. The technical component of the model provides for the use of two-stage dispenser, where there is an electro-pneumatic gear shift mechanism with integrated differential. 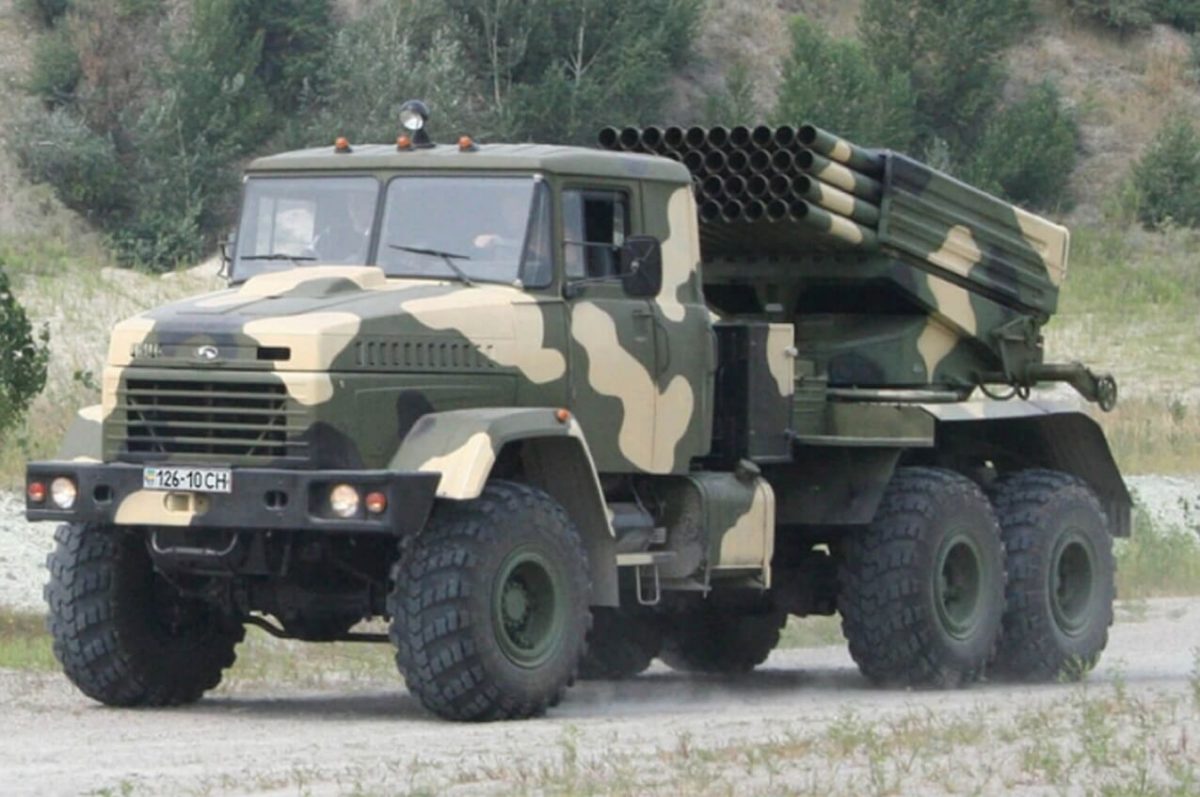 The frame of the truck is represented by a ladder type. It has been reinforced with auxiliary pads to increase durability when operating in difficult operating conditions. The KrAZ’s suspension system receives the highest dynamic stresses while driving off-road.

If we talk about the braking system, it’s a two-circuit system, where there is a disparate pneumatic drive. All wheels are equipped with drum brakes. Thanks to the pneumatic brakes, the braking elements on the front and rear carts are operated. The parking brake is represented by the drum-type transmission brake on the output shaft of the mechanically driven transfer car. There are also auxiliary brakes, represented by throttle type with mechanical drive, which is installed in the exhaust gas system.

The model is a Ukrainian armored car, which was demonstrated for the first time on November 21, 2014. The all-wheel drive truck provides reliable protection against small arms and mines for the crew and troops. The first and second versions of the Raptor are available. The production was also carried out by the Canadian company Streit Armored Group.

This armored vehicle serves as a multi-purpose armored flatbed model based on 6322 with the same formula of 6×6 wheels. The vehicle is distinguished by a removable armored compartment for landing. If necessary, the removable armored kung can be removed and installed on the roadblock, which will allow you to install a place for housing and heating personnel. The armored module can accommodate about 20 people. 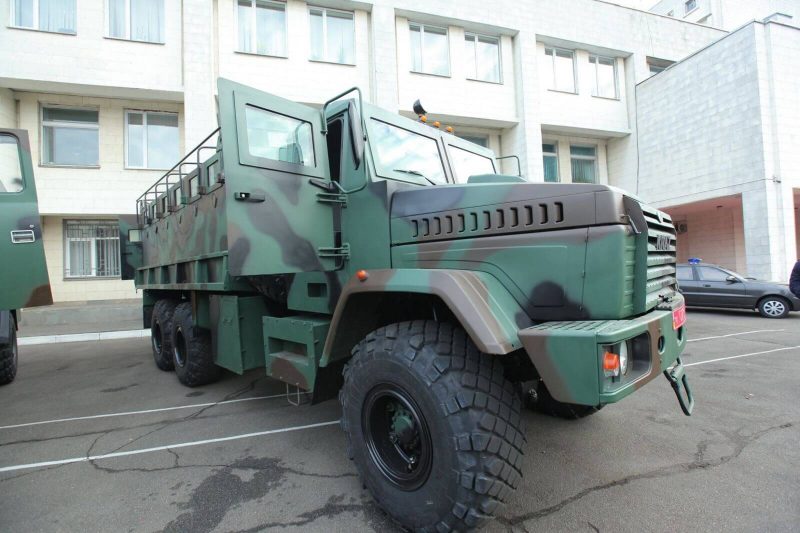 When the demonstration tests were being conducted, the Kremenchug automobile plant truck was able to easily overcome the obstacle course on the range, where there was a “big hill” (height 5.2 meters), 10 alternating hills (height of each up to two meters and distance between them 6 meters). There were no problems with “concrete obstacles”, “bumpy road”, “springboard” and water trench, the depth of which was 1.5 m, and its length was 25.7 m.

According to eyewitnesses, the Raptor version, which was produced for the Gulf countries and India in 2007, is slightly inferior to the new model. The new model already has an armored cabin, hood, installed more powerful fuel tank protection and other features. The armored body has also been upgraded and the loopholes in the armored body. 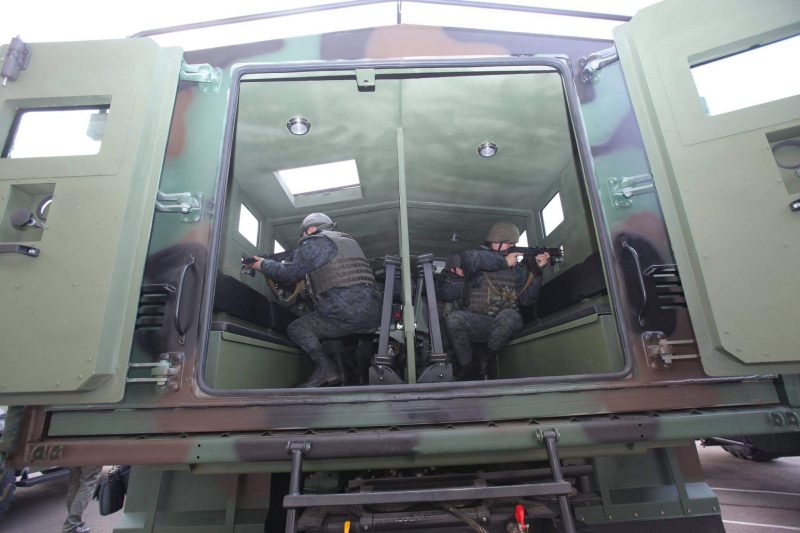 All the important features of “Raptor” are the incredibly high passability. With the help of the wheelbase 6×6, the presence of interwheel and interaxle differential locks, wide profile tires this car can pass on quicksand, is not afraid of swampy terrain or snow cover. The machine has a payload of 6,000 kg. With a GVW of 23 tons, the KrAZ-6322 “Raptor” is capable of towing a trailer with a weight of up to 30,000 kg. The machine has a power reserve of 1,500 kilometers.

The pricing policy of the Kremenchug Automobile Plant has always been a clear advantage among other models. <So, for example, for the KrAZ-6322 “Soldier” model you will have to pay from 3,030,000 rubles. If necessary, the truck can be equipped with right-hand drive. If necessary, they can also install ABS anti-lock system – Knorr-Bremse; Wabco. 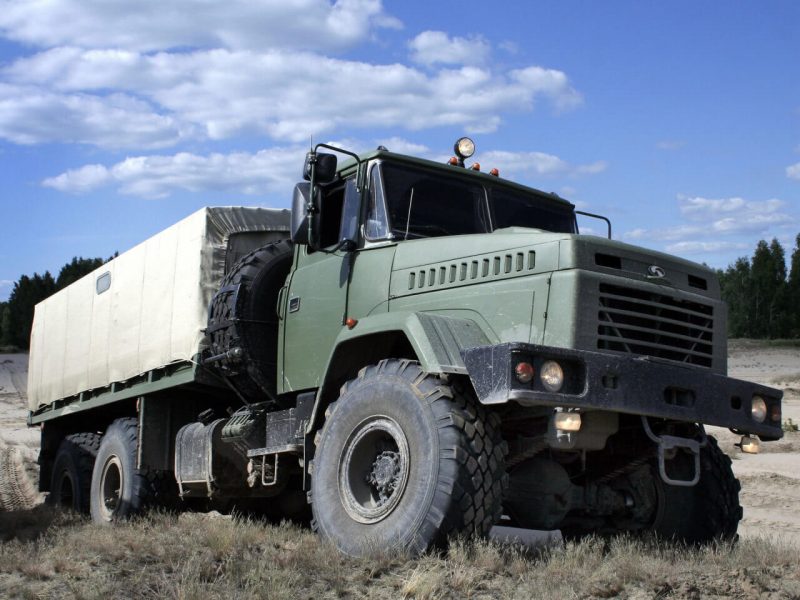 The KrAZ-6322 is a real all-wheel drive off-road truck. You fall in love with this model very quickly and you understand why many armies of the world buy this vehicle. In fact, the car is in good demand for many years, especially where there are hard-to-reach places. The truck is simply designed for off-road. Moreover, it can carry cargo on itself and transport trailers with a large mass, which is very useful for the army and various companies.

Despite the fact that the car is not too young, it has a pleasant appearance, as well as a decent level of comfort inside. For example, the design staff placed heating and ventilation systems in the cabin, and equipped the driver’s seat with an air suspension, so working inside such a massive truck will not be difficult, given the installation of hydraulic power steering. 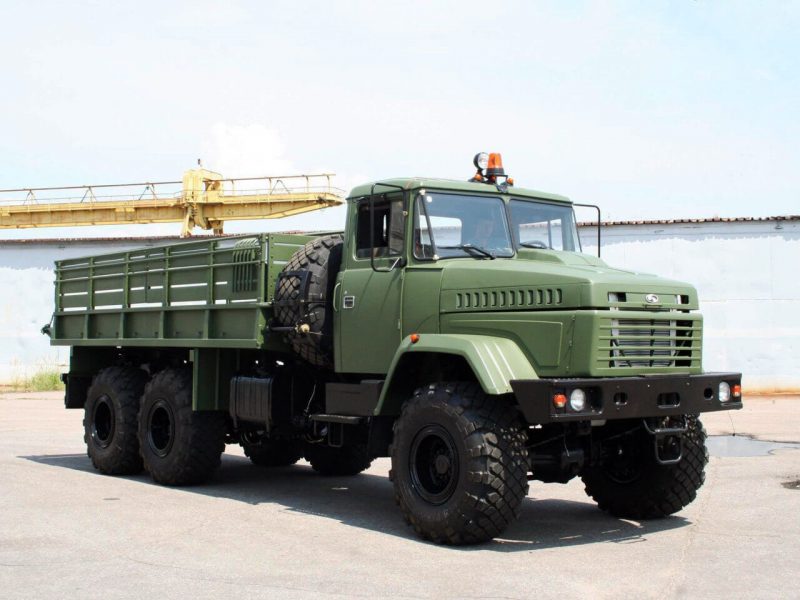 A ford 1.5 meters deep isn’t a problem for a car. Together with the powerful powertrain, convenient gearbox, all-wheel drive system and high ground clearance, the KrAZ-6322 can pass where other trucks can get stuck. It is also worth mentioning another obvious advantage of the Kremenchug automobile plant truck – it is relatively low cost and good maintainability. Spare parts can be bought without much difficulty. KrAZ-6322 is a severe all-wheel drive truck, which is not afraid of temperature changes and can be used in many countries. 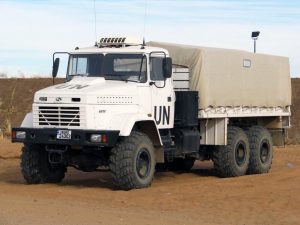 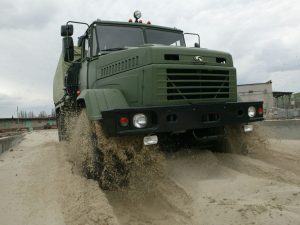 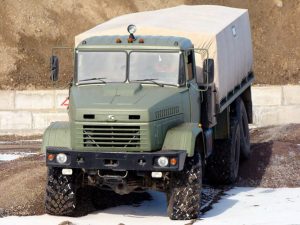 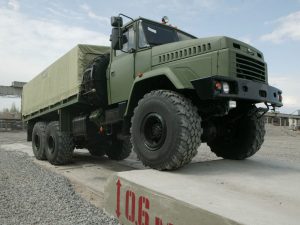 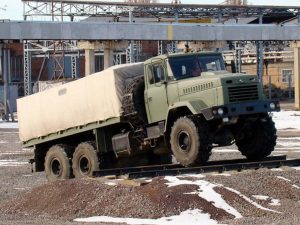 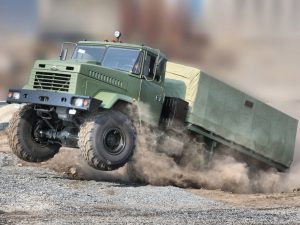 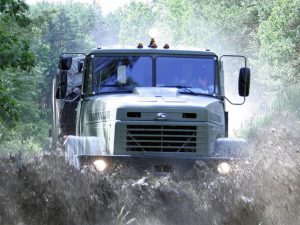 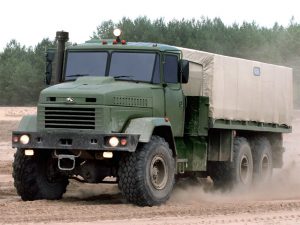 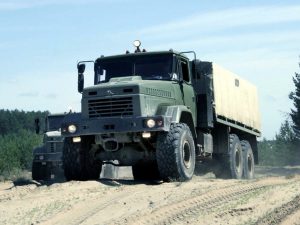