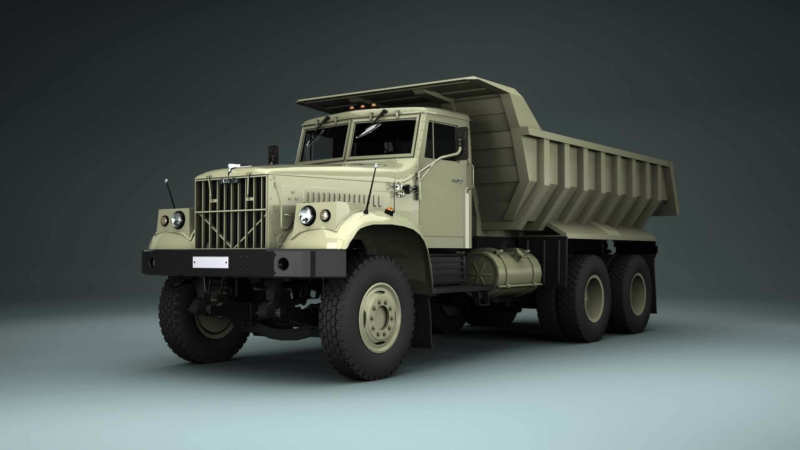 KrAZ-256 is a Soviet dump truck, which replaced earlier Yaaz and KrAZ-222 trucks in 1966. The vehicle became the debut postwar heavy-duty vehicle. Due to its massive size, it was almost not used in the city, but it still works in quarries, mining and oil producing enterprises. The model was produced for 11 years, after which KAMAZs moved our giant a little bit back.

Vehicle production was established in 1986, but out of the 18 vehicles that had appeared at that time, not a single copy survived to our time. However, in the automotive market there is an opportunity to find cars that were produced in the debut 11 years. The truck has a large payload, a large mass of components (as most parts were made of cast iron), as well as high cross-country ability. The whole model range is KrAZ.

The Kremenchug facility was built from the start to produce heavy-duty trucks. Initially, machine 222, which was named “Dnepr-222”, was produced during 1950s of XX century. Six years later, the KrAZ-256 was demonstrated, which acquired the best developments of the 222nd model. The truck was used at the quarries or on a large-scale construction site. The main body was a bucket-type dump truck, where there were no tailsides. Also on this platform there were made on-board modifications of the trucks, but because of some moments these vehicles were not further developed.

Over the 11 years of production, the 256th model has undergone some upgrades, but the changes have mainly concerned only the cab and hood. The main body was not changed. The machine has been recognized many times as simple and unpretentious. In addition, it is quite strong. However, it was also not very easy to operate the truck model, as it required considerable physical strength. Over these short years, the conveyor belt was able to produce many cars that had the same parameters.

The characteristics of the machine were changed only twice. For the first time the truck was produced for the conditions of the Far North (there was an index “C” in the name). It had a heated cabin and hood. The second was the modification “B”, which had a separate brake system. The first batch of new trucks was assembled in 1961. The most important difference from the previous trucks was the powertrain. Previously, these vehicles were equipped with two-stroke diesel engines.

But we decided to equip our novelty with a four-stroke engine. Everything in the Union of Soviet Socialist Republics, which also included the automotive industry, was under the control of the Communist Party. Therefore, in 1959, at the next 21st Party Congress, the Yaroslavl engine manufacturers received instructions to design a more productive and economical engine than a two-stroke one.

A year later, a list of diesel engines was produced, including the YaMZ-236, where there were six cylinders, the YaMZ-240, where there were twelve cylinders and an eight-cylinder YaMZ-238. It was the 8-cylinder model that was decided to install on the KrAZ-256. The graduation began to develop actively in 1967. The enterprise in Kremenchug began to produce machines in series order, where there was a backfilling. For those times, such a vehicle had unusual technical characteristics, so it began to be widely used in the development of quarries and construction sites.

After all, the angle of climbing for the machine was 38 degrees. The model had the formula of 6×4 wheels. A little later, it was replaced by the KrAZ-256B1, which differed by a list of not so important upgrades and the presence of separate brake drive. The machine was designed to function on the road sections of the 2nd and 1st category, with an axle load of up to 10,000 kilograms.

The KrAZ-256 dump truck went along with a two-cylinder hydraulic bucket body, where there was a rear unloading. It was extremely powerful and reliable, and was not afraid of overloading. The bucket was unloaded in 20 seconds and dropped in about 30 seconds. 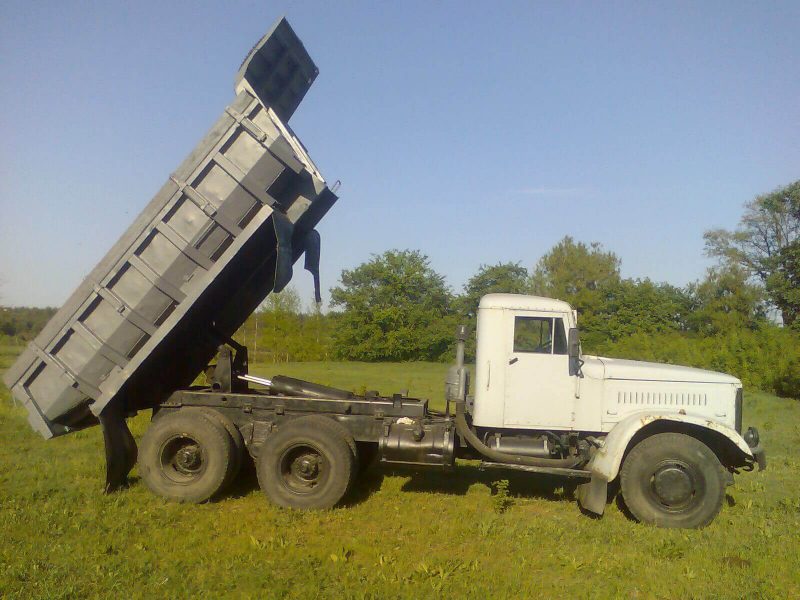 The first trucks were made on a frame of personal production, where the engine plant units in Yaroslavl were used. Such a powerful and passable dump truck was very necessary for the national economy of the Soviet Union, as models with such a class in those years were not in sight.Because of its reliable engine and simplicity of design, the KrAZ-256 was popular not only in the domestic market, but also exported to other countries. KrAZ-256 was exported to 55 countries of the world as of 1978.

The company took into account not only the climatic conditions of the exporter’s country, but also the properties of the road traffic. For example, for England, for operation in sand quarries, the model was right-handed. Southern countries received cars with tropical design. Countries with a cold climate received two-layer windows of the cabin and frost-resistant rubber, and the power unit had a preheater. During the mid-1970s, the technical design became obsolete, because the 256th model was based on Yaroslavl trucks. The latter, in turn, were developed since the late 1940s.

Among the growing number of controls that can be singled out are the controls that required significant physical strength, a massive frame made of rolled channels, which was not retailed with high strength. Also, the presence of wood-metal cabins did not allow it to be used for so long. If you compare the car with foreign rivals, who appeared later, the 256th model looked like a “dinosaur”. In Germany, the “Magirus-Deutz” was produced, and in the Czech Republic, the “Tatra”, which did not differ with the latest solutions, but looked more preferable. 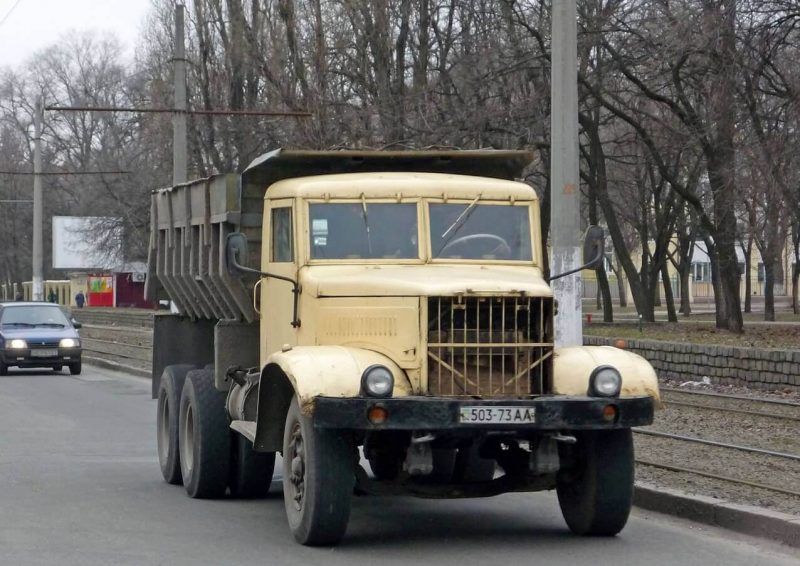 The 251st model, which was to replace the 256th, was envisaged, but its production was postponed. As a result, a full-fledged competitor to foreign copies was only available in the 1980s. But despite everything, the first domestic heavy dump truck was able to remain forever in the history of Soviet mechanical engineering. The machine was a real hard worker and could be used for various bulk cargoes, and not only. The KrAZ 256 truck tractor – some of them even used this truck in this way.

The cabin was at the KrAZ-256 three-seat plan, which was installed behind the engine compartment. The chauffeur’s seat was sprung and adjusted according to the length, weight of the chauffeur, back inclination and height. In addition to the chauffeur, there is room for two passengers in the cabin.

In 1969, the turntables, along with the headlights, decided to be mounted in special boxes, which were placed on the wings. At the end of the 1970s, the headlamp installation site was simplified, and the wheels of the car were made diskless.

The management of the Kremenchug automobile plant continued to cooperate with the Yaroslavl motor plant. Therefore, the new model had a 15-liter V-shaped four-stroke eight-cylinder overhead valve power unit, which produced 240 horsepower at 2,100 rpm.

The KrAZ 256 could accelerate up to 68 kilometers per hour, and the engine consumed 39 liters of fuel per 100 kilometers of road. There were two fuel tanks, each with a capacity of 165 litres (330 litres in total)/

The powerful engine is paired with a 5-speed manual gearbox with interaxle lockable differential and two-speed transfer gearbox. The fifth gearbox speed serves as an upward speed, there is also a rear speed. The KrAZ-256 truck was also equipped with a double-disc friction dry clutch, where the compression springs were peripherally located.

Thanks to it, the vehicle was well controlled when driving on a dirt road or downhill. But she needed to take some precautions. The second circuit only affected the rear axle, and the first circuit only affected the middle and front axles. The working brake system had drums with a diameter of 440 mm. There was also a drum-type parking brake system, which was mechanically driven and locked the rear axle.

Also, the braking system of the dump truck was markedly defective. During a long descent, the driver could not be braked by the engine while riding on the roll, as in such a situation the operation of the hydraulic power steering and compressor did not work. Compressed air in the brake cylinders was wasted. After that, it was extremely difficult to stop the car.

It is represented by a screw, a rail nut with rolling balls and a sector. Also, as the weight of the machine was huge, the hydraulic power steering helped to control it.

The last modification is KrAZ-256 B1C, which left the enterprise only in winter (January) 1994, after which the plant stopped production of dump trucks.

To date, there are not so many ads selling KrAZ-256. This is partly due to the fact that the car has long been taken off the market. Working copies on the secondary market can be bought for the price from 150 000 to 600 000 rubles.

This equipment is not available for rent in the car market. It is interesting that even outdated cars are still used to produce automotive spare parts, not only at the Kremenchug enterprise, but also at other enterprises. 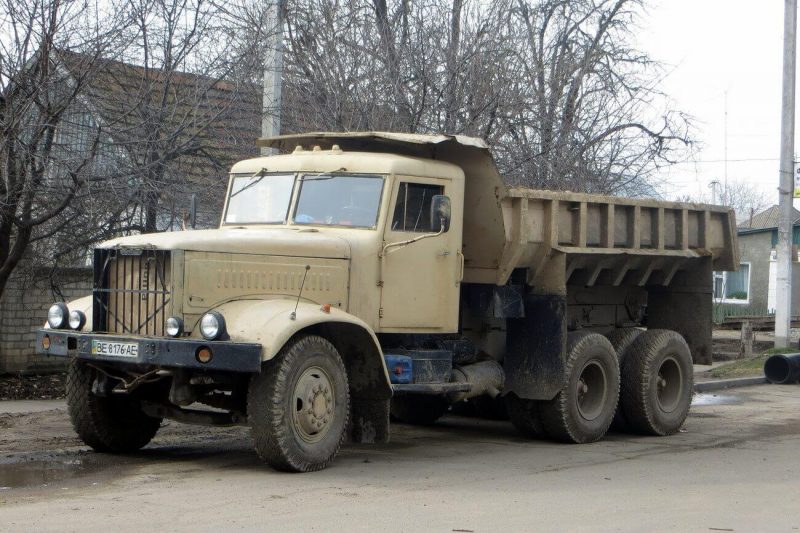 As it was mentioned above, the improvements for the KrAZ-256 model were only a few times, but they have never changed the car globally. But, despite its age, the first dump truck could survive to our time, and it continues to be used at various places of extracting spheres and on construction sites.

The model is not afraid of overloading, it is quite simple and can work where other dump trucks will feel problems. There is a powerful power unit, which of course consumes a lot of fuel, but it will not be felt lack of energy. Due to the presence of hydraulic power steering, it is quite easy to drive such a large truck. 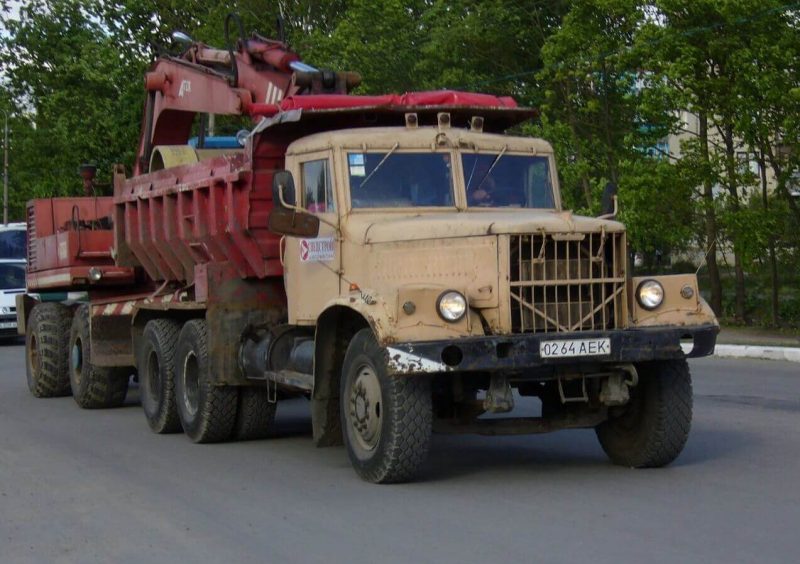 The tipper body itself rises and falls as fast as possible, saving the driver’s working time. There are problems with braking systems that need to be monitored carefully. Inside, too, not as comfortable as, for example, foreign counterparts. However, remembering the pricing policy of the truck, it is possible to close one’s eyes to a lot of things, because KrAZ-256 is actually an “unkillable” dump truck. 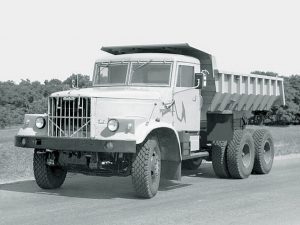 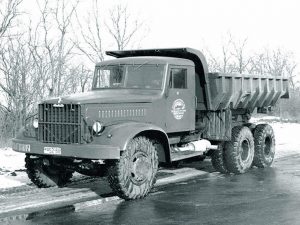 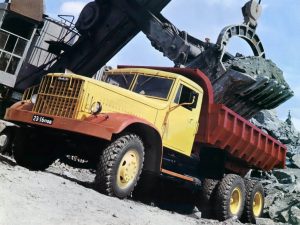 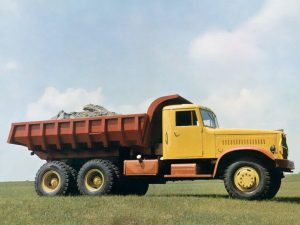 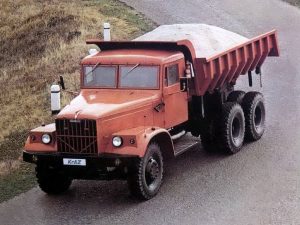 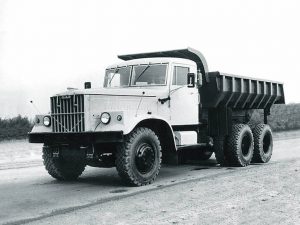 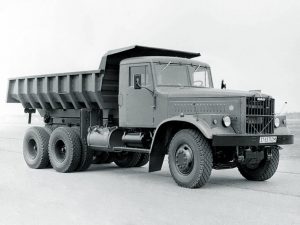 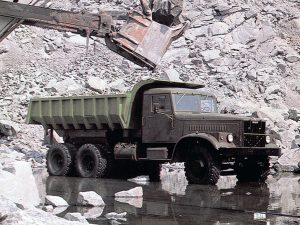 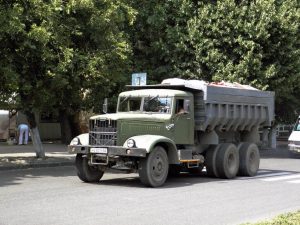