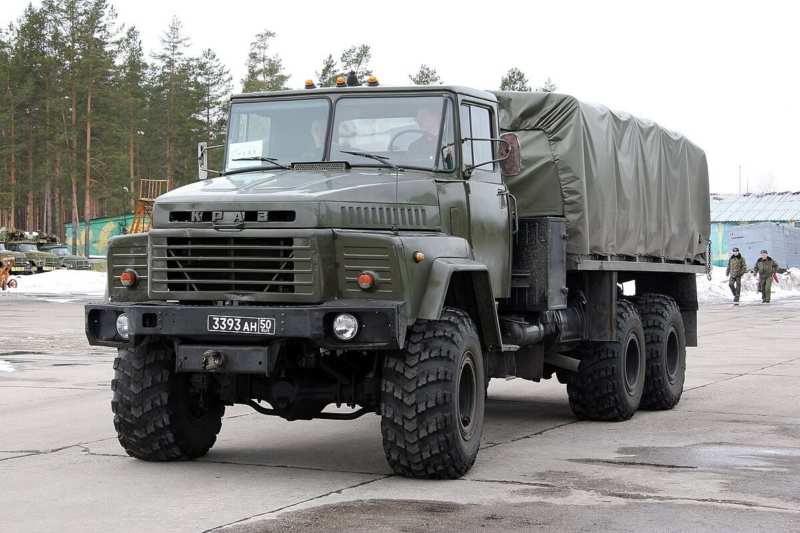 KrAZ-260 is a special vehicle in the list of trucks produced by the Kremenchug Automobile Plant, which was able to replace the obsolete models 255 and 256 B. The model was produced since 1979 and was notable for its good cross-country ability and capacity. There were versions of dump truck and tractor. Below will be presented the entire catalog. The whole model range is KrAZ.

In general, the list of vehicles of the automobile enterprise in Kremenchug has a special account for the 260th tractor. Its development was started by the design staff in the early 1960s. The most important conditions that were chosen for this model were durability and increased cross-country ability. The vehicle was positioned as a replacement for the KrAZu-255B.

From the very beginning, the main buyers of the 260th vehicle were the military, but after that, the truck was used in other areas as well. In the mid-1960s, the Design Bureau of the Automobile Plant under the supervision of a senior designer (at that time it was V.V. Tabolin) began to design a new machine with increased cross-country ability. 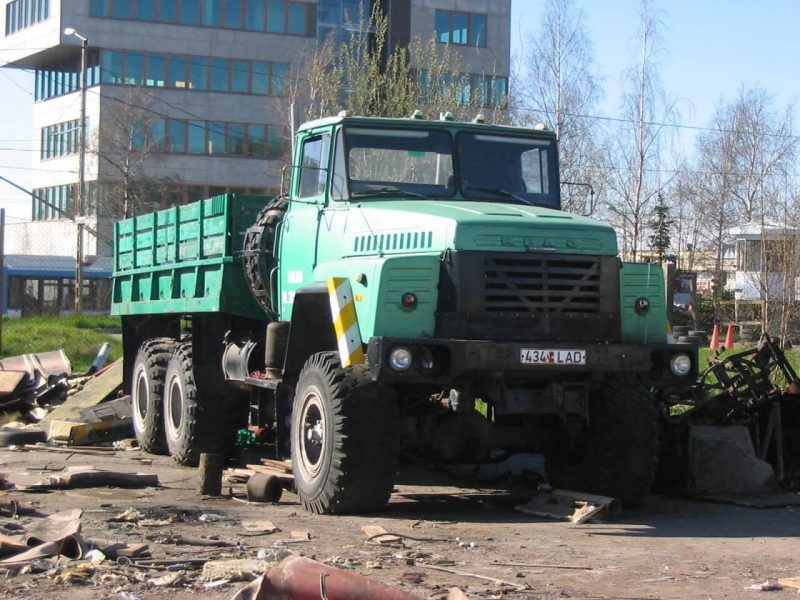 During the design of the new product specialists chose a three-axle version with increased payload as the base. But the right “stuffing” required further development. As a result, both the important components and the cab were further developed. The obsolete metal-wood cab has moved away from production. The design of the leading truck, which will soon become the founder of a large family of trucks, was completed in 1979. Production of the serial plan of the model was started only after two years.

The technical characteristics of the machine were quite high for their time. It allowed to use the truck to transport military personnel, various cargoes and military installations on any surface, even if it was off-road. If we compare the model with its predecessor, the novelty had many advantages. Thanks to extensive testing, it was clear that the speed was increased by 11 per cent, the weight of the cargo was increased by 20 per cent, and fuel consumption was reduced by 6 per cent. 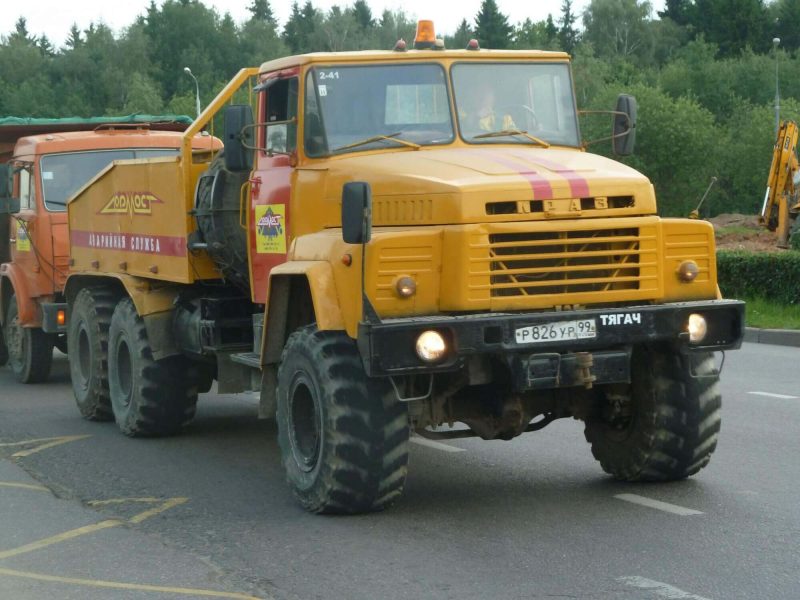 The operational resources were almost doubled. Despite the fact that the designers decided to save the bonneted layout of the truck, the cabin of the 260th model was moved forward, which can be seen in the scheme. Thanks to this method, the length of the load platform was increased, thus increasing by one and a half tons the payload of the vehicle.

In addition, the designers reduced the bonnet length and increased visibility from the cab. They decided to borrow a new all-metal three-seaterial cab from the 250th model of the Kremenchug automobile plant. If we compare it with many army vehicles of those times, it has an acceptable level of comfort, as well as a modern design. 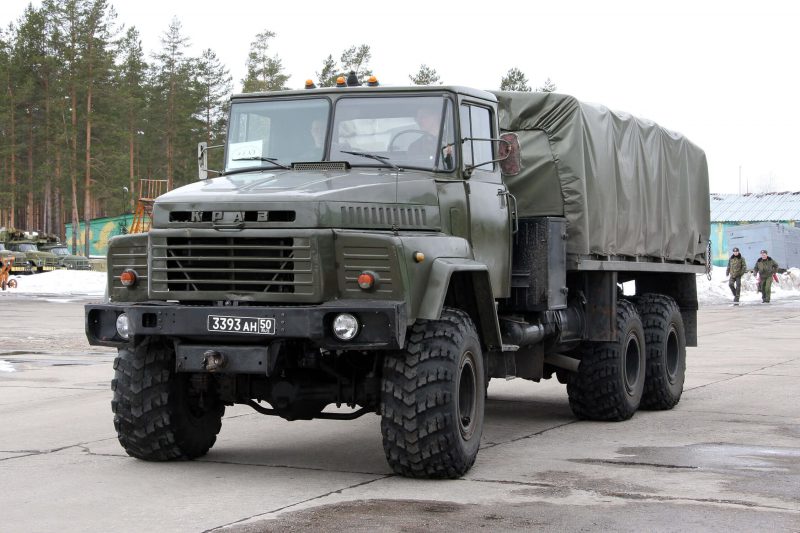 In addition, the cabin has received the presence of modern ventilation and heating systems, as well as a sprung driver’s seat with the ability to adjust it to the individual needs of each. It is also possible to install a seatbelt. The standard bodywork is a metal platform of the army model, where you can open the tailgate.

Its design capabilities are provided by grille-type auxiliary sides. There you can find tilting seats and the possibility of mounting the tent. There are many examples of the KrAZ 260 photos on the network, as well as an operating manual.

The 260th model of the Kremenchug automobile plant is a universal truck. In addition to the military field, such a machine is widely used in the national economy. The truck became popular due to its good cross-country ability under different road conditions. The 260th is a tractor complex with an all-terrain vehicle, which can carry loads weighing up to 10 tons. The machine is used for transportation of air defense missile complexes S-200 and S-300, and also perfectly transports passengers, large-size cargoes to hard-to-reach regions.

Because of its reliable qualities and unpretentiousness in use, the KrAZ-260 vehicle is used not only on the domestic soil, but also abroad, because the vehicle has proven itself as a universal model, the technical component of which is simply excellent. Catalogue on the Internet, contains a tractor and dump truck, which are often used for military purposes and in various quarries. 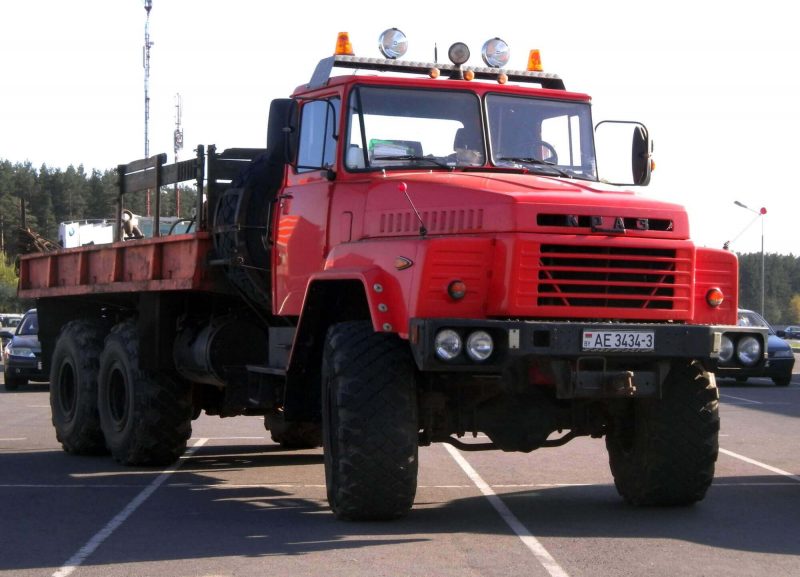 The truck has a turning radius of 13 meters and a possible maximum ford depth of 1.2 meters. This makes it one of the most passable domestic cars. The KrAZ-269V truck tractors were in high demand. At the back of the truck there is a shortened frame and a fifth wheel, with the help of which the truck could tow semitrailers weighing more than 27.5 tons on the city highway and 23 tons on the dirt road.

Such trucks were often used by the military units as road trains for launchers, anti-aircraft missile systems, radar stations, etc. Long chassis, which became standard for the design of various special vehicles, acquired the name 260G. 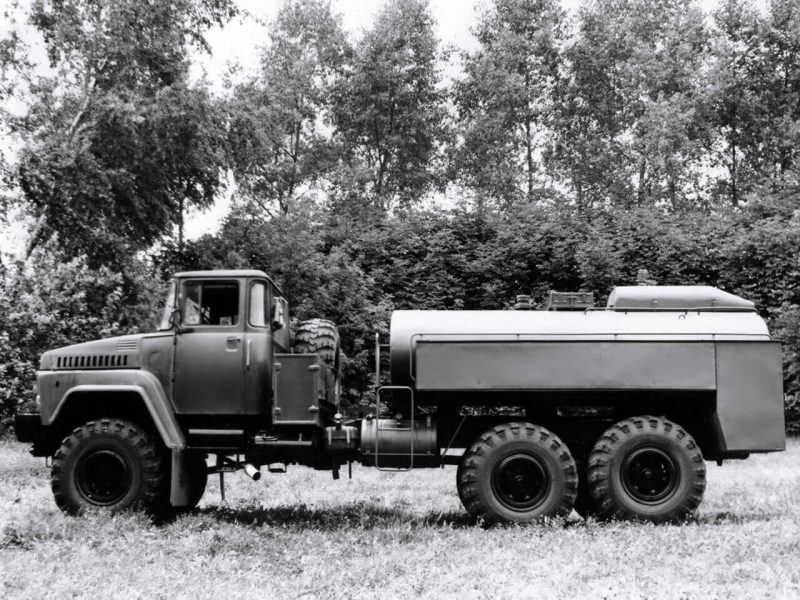 On its platform were able to install pontoon cars, bridge-building machines, cranes and drilling rigs, desalination stations, fuel tankers and so on. The design staff of the company has also developed the presence of prototypes of a logging truck, which is very similar to a similar special transport, on the platform 255L. But the serial production could not be established, and a little later, a specialized KrAZ-6437 was produced for the needs of forest production.

The car needed a stronger engine in view of its serious improvement. As a result, they chose an eight-cylinder V-shaped 15-liter multifuel engine YaMZ-238L, where there was a turbocharger. The engine developed 300 horsepower.

The machine was often used in difficult road conditions, therefore, the engine was equipped with an innovative system that included automatic dust extraction and a couple of air filters, where there was a two-stage cleaning system. The exhaust gas systems were also upgraded. Instead of a silencer, a turbocharger was installed here. 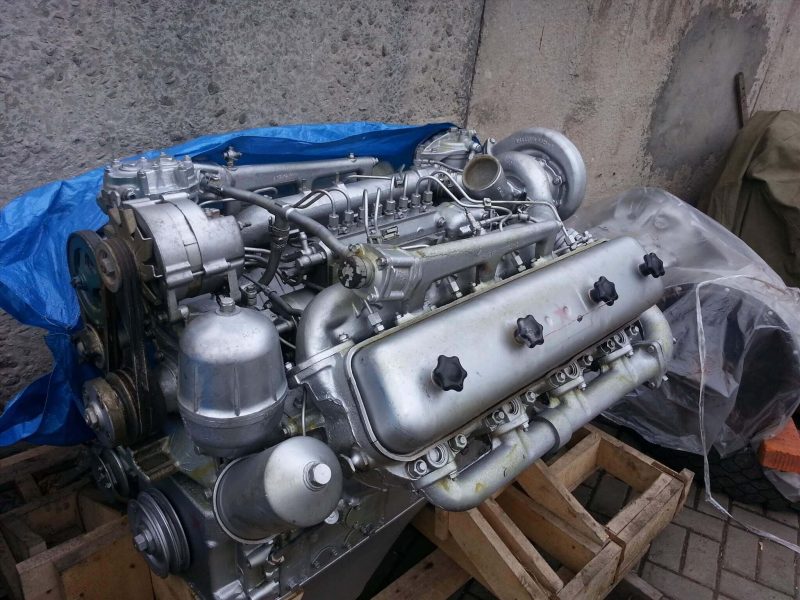 To ensure that the engine starts in cold weather, the motor has received a Thermostart electrostatic flare device and a pre-start heater. The location of the motor cannot be called too convenient, since the removal of the power unit requires the removal of the cab. High-pressure fuel pump was 8-section and had a slide valve type, where there was a low-pressure fuel pump, fuel injection advance coupling and all-mode speed regulator. Nozzles are of closed type. KrAz engine consumed 260 liters of fuel at a speed of about 50 km/h. At a speed of 60 kilometers per hour, the consumption increased to 38.5 liters per 100 kilometers.

Two tanks were installed, each with a capacity of 165 litres (330 litres in total) and an auxiliary tank with a capacity of 50 litres of diesel fuel. If the car was fully filled, it could travel up to 1,000 kilometers. The maximum speed limit is 80 kilometres per hour. Do not forget what kind of car it is and for what purpose it was created. Then fuel consumption and questions about its dynamics disappear into the background.

Due to the fact that KrAZ-260 was equipped with a stronger engine, it was necessary to install an improved gearbox. Therefore, the model had a four-speed transmission YaMZ-238B, where there were synchronizers at all front speeds. The changes also affected the two-stage dispenser, which had electro-pneumatic speed change control and made it possible to block the inter-axis differential by pressing the required switch.

The latter could be found on the dashboard. The clutch is of a dry, two-disc type, with peripheral springs and a hydro-pneumatic actuator. From the car 255B, we decided to take a more reliable front axle, which was slightly modified. The middle axle was made by the design staff, passing through.

On the steering mechanism, there is a hydraulic power steering that allows you to easily drive such a massive vehicle. The device has a screw and a ball rail nut, which is meshing with the toothed sector. There is also an amplifier distributor. The power cylinder of the steering booster is connected to the double-arm cam lever. There are many additional features of the KrAZ 260 on the Internet.

In addition to the standard model, the Kremenchug automobile plant produced other specialized modifications of the machine:

In the network you can find a catalogue of these modifications, as well as see KrAZ 260 autocrane, which is not so common.

Following the collapse of the Union of Soviet Socialist Republics, the popularization of the 260th model has declined dramatically. But even today the car market presents a large number of cars of the Kremenchug automobile enterprise, which can be purchased from the hands. The price category of the 1991-1992 models will range from 400,000 to 700,000 rubles.

Some modifications will cost much more – up to 1 300 000 rubles. Such price changes are quite easy to explain – the machines have different condition, year of manufacture and installed equipment. It is also possible to rent a car, for every hour you will have to pay about 1,000 rubles. 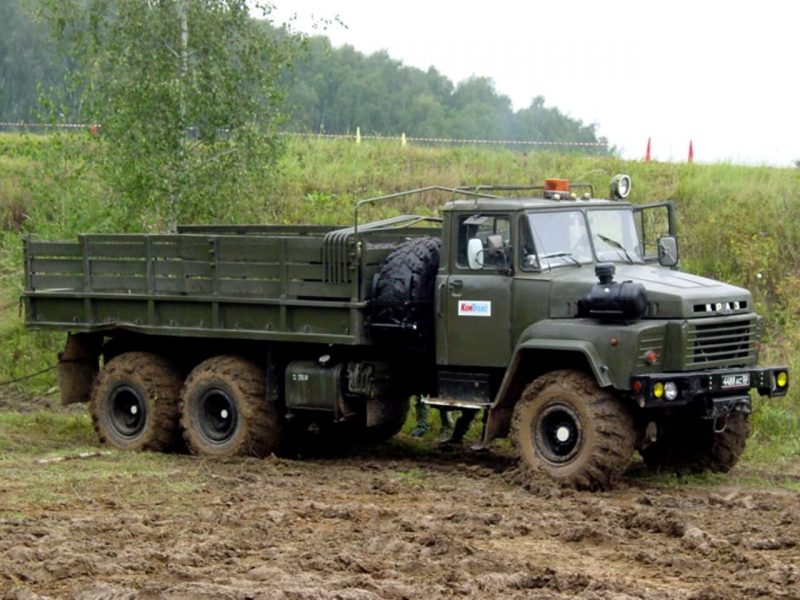 KrAZ-260 has turned out to be very balanced and powerful. Its domestic analogues had a much weaker power unit. Perhaps that is why KrAZ trucks were often used to transport heavy equipment, such as tanks. Moreover, the model received a solid ground clearance height, which together with the four-wheel drive system on all six wheels provides the vehicle with excellent cross-country ability.

It is not for nothing that most of the vehicles are used for the needs of the army, which, in fact, requires reliability, unpretentiousness, power and passability. Despite the fact that the car was designed for off-road, it is not deprived of comfort. The model received a hydraulic power steering, heating and ventilation system, adjustable driver’s seat. 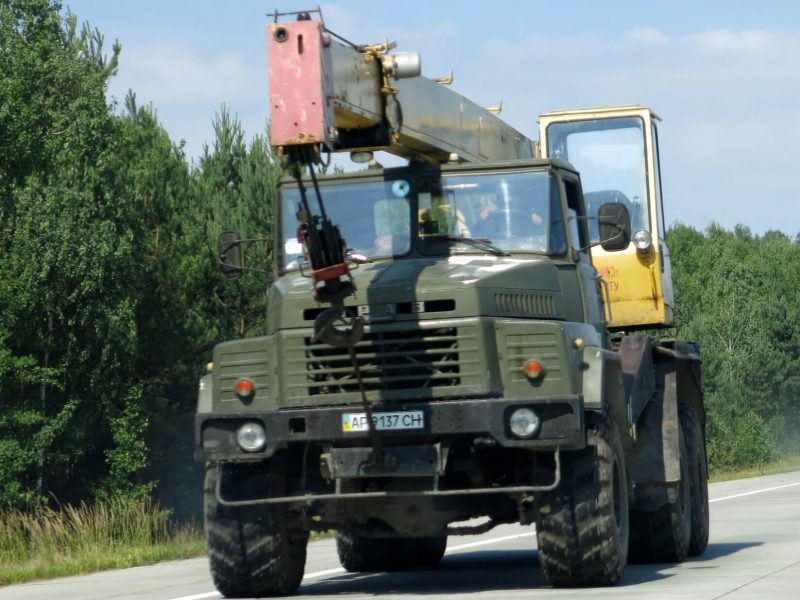 It can be seen that during the development of the Kremenchug automobile plant they did not think only about the cross-country ability and power, but took care of ensuring a fairly good level of comfort. The car is not afraid of overloads, so it is often used as a reliable worker in various quarries and loess production facilities.

Of course, the engine eats a lot, but there is plenty of power here to carry even a very heavy load. Single wheels with off-road tires will help to get out of almost any off-road. A new car is not to be bought anymore, but it is often purchased from hands, as its price is much lower than its European counterparts. 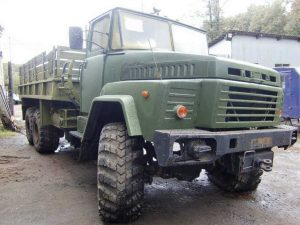 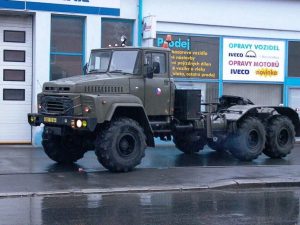 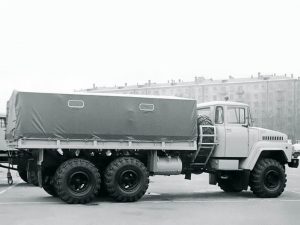 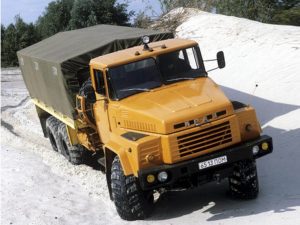 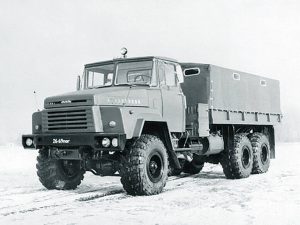 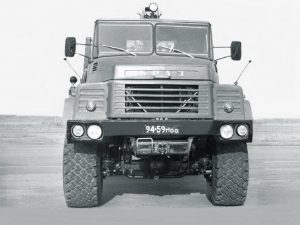 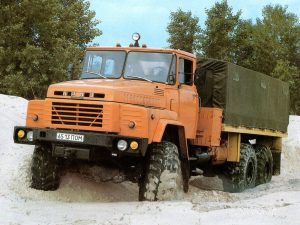 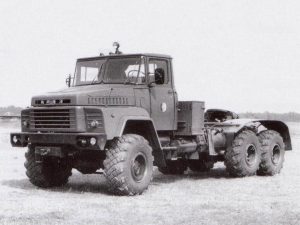 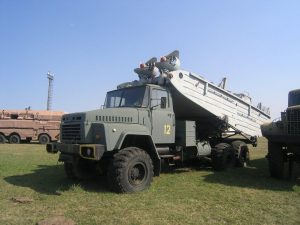