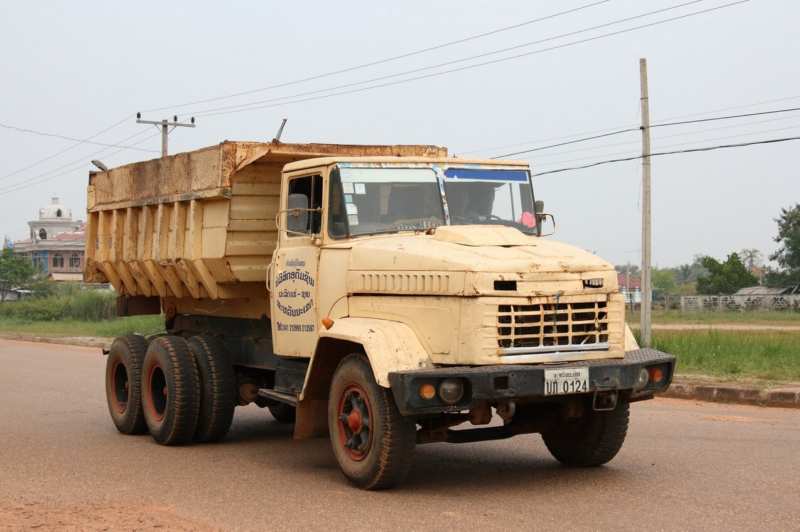 KrAZ-6510 is a Ukrainian heavy-duty truck, which production started in 1992 at the Kremenchug automobile plant. The truck was produced in several variations. It is intended for transportation of building materials (loose and bulk) on a solid roadway. The whole model range is KrAZ.

The Kremenchug Automotive Company was founded 80 years ago, and from the very beginning it has been focused on aviation. In wartime, a considerable part of the entire plant was severely damaged. The company was rebuilt immediately after the withdrawal of German troops. Taking this into account, we decided to change the profile of the company. Since the country needed to replace bridges and chassis, which were damaged during bombardments, the plant began to produce trucks.

The first truck was produced in 1949. After a while, the main capacities of the Yaroslavl-based automobile company, which produced heavy-duty trucks, were transferred here. The debut trucks of the Kremenchug factory were produced in 1959. When the 1960s and 1970s went on, the Kremenchug automobile plant promoted an active increase in production, and its vehicles were quite popular. 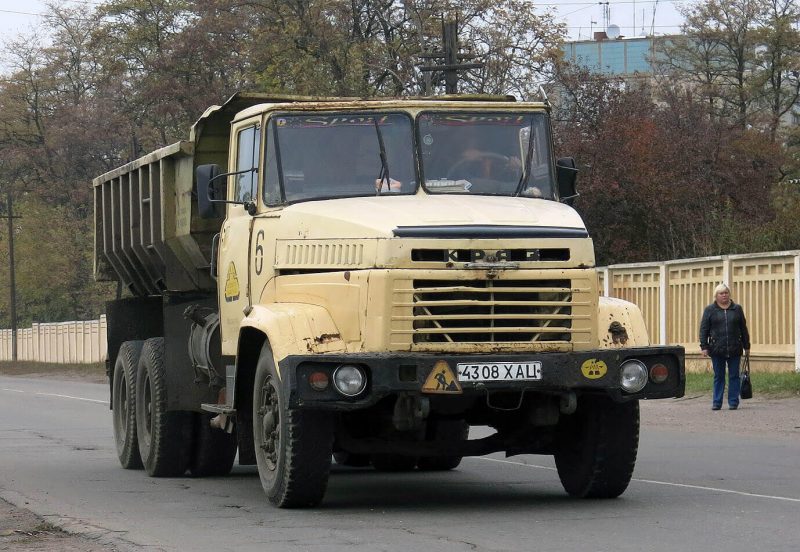 The design compositions did not cease to improve the machines already built by them, using new standard vehicles and their various modifications.  But over time, the technical component began to fade. The company decided not to improve the existing machines and to produce the latest series. As a result, KrAZ-6510 was able to appear. The completely new machine replaced the 250th version, which had already become morally obsolete by those years. The main components, along with the truck mechanisms were improved. The previous model passed only the bridges. The cargo platform was used to mount special purpose mechanisms.

The truck of the Kremenchug Automobile Plant was very popular with various enterprises of the industrial region. With the help of the 6×4 wheel formula and a pair of driving axles, the truck could feel confident on various types of roads where there was a hard surface. It is worth mentioning that the truck worked perfectly on both dirt roads and gravel roads. The KrAZ-6510 has an increased tonnage and is capable of transporting up to 16 tons of cargo. This article will describe technical characteristics of KrAZ 6510.

The famous Ukrainian dump truck has a rather spacious cabin. But the degree of comfort in it is at a minimum level. Based on the feedback from drivers, the interior of the truck is quite cool in winter, but in summer, on the contrary, it is hot. Working on a truck in the warm season is like visiting a bathhouse. And if we take the winter time, the inside of the truck is cool, regardless of the included two heaters. Far from perfect, noise and vibration isolation. Despite this, our drivers are ready to forgive such disadvantages to KrAZ 6510.

The design staff of the Kremenchug automobile plant decided to make a full-fledged metal cabin. Just here, Ukrainian specialists completely abandoned the wooden frame. The dimensions of the car are not small, so even experienced drivers need to get used to them. Many obstacles, which are located in front of the hood, are extremely difficult for the driver to see. The steering wheel is equipped with a hydraulic booster, which makes driving such a massive car much easier. 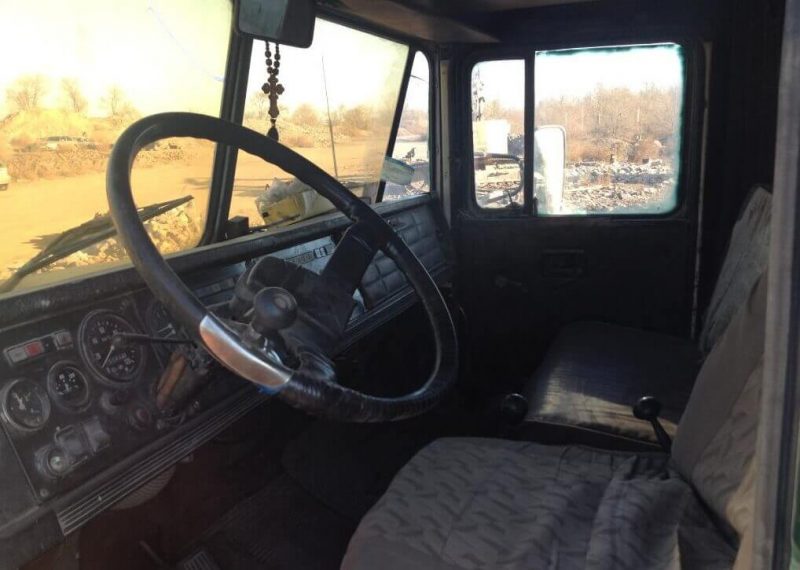 In terms of power, our model stands out from the crowd. KrAZ-6510 has an unpretentious and reliable V-shaped, 8-cylinder, 14.86-liter, carburetor power unit “YaMZ-238M2”. It develops 232 horsepower. Such an engine is produced at the engine plant of Yaroslavl and it runs on diesel fuel. As a separate option, the engine is supplied with a preheater, which allows you to start the engine in winter. In addition, there is a fuel system heater. 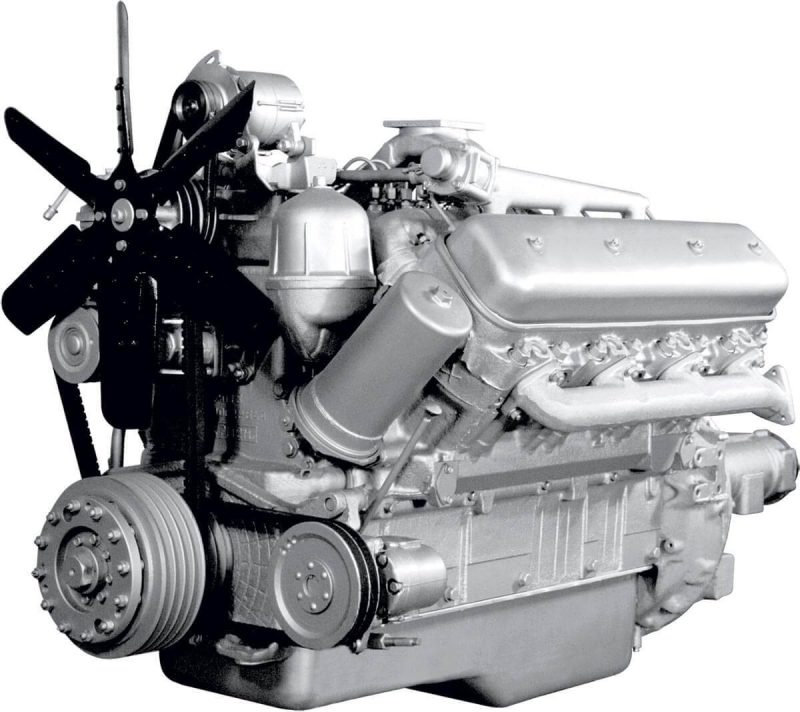 The engine does not have an inflatable device and does not show unprecedented dynamic characteristics. Despite this, the vehicle of the Kremenchug automobile plant reaches a maximum mark of 80 km/h, which is not a bad result for such a heavy machine. For every 100 kilometers, the motor consumes about 33 liters of diesel fuel. There are two fuel tanks at the KrAZ, each of which has a capacity of 165 liters (330 liters in total), which allows the vehicle to do without refueling for a long time.

Synchronized is not such a powerful engine with a 5-speed manual gearbox, which works together with a 2-speed mechanical dispenser. The truck does not have a speed limiter. The truck is equipped with a dry, double disc clutch.

Thanks to the 6×4 wheelbase, which has a pair of drive axles, the vehicle can drive not only on paved roads, but also on the ground or covered with crushed stone. The truck has a fairly good payload (16,000 kg) and is not afraid of being overloaded. With this capacity, it is possible to shorten the travel time and carry more load at a time.

It is represented here by a mechanical type and has a hydraulic booster, which allows you to easily and conveniently control this vehicle, regardless of its massive size.

Kremenchug automobile enterprise made 2 modifications on a platform KrAZ-6510:

Also, our guest chassis are often used for the installation platform of crane systems of different manufacturers. Truck cranes have different lifting capacities and performance characteristics. For example, the boom length of 30-ton crane KS-557, with a hydraulic device, is 27 meters. 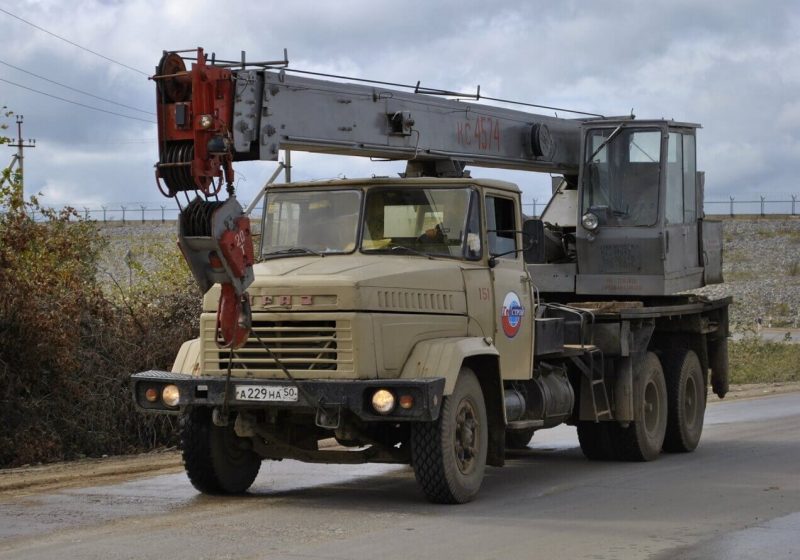 Sometimes a pump unit with a CA 320 tank is installed on the standard model. This cementing model is used for drilling work on wells or overhauls. The system itself is installed on a separate frame, where there are special metal sleds. The pump is driven by the KAMAZ power plant or YaMZ. There is a catalogue of models and superstructures on the KrAZ-6510 in the Internet.

The price will depend on the equipment used. Cars of older production (95-96th years of the twentieth century) are estimated from 250,000 to 300,000 rubles. Also, the possibility of renting a dump truck, which will be estimated at about 950 – 1000 rubles per hour. 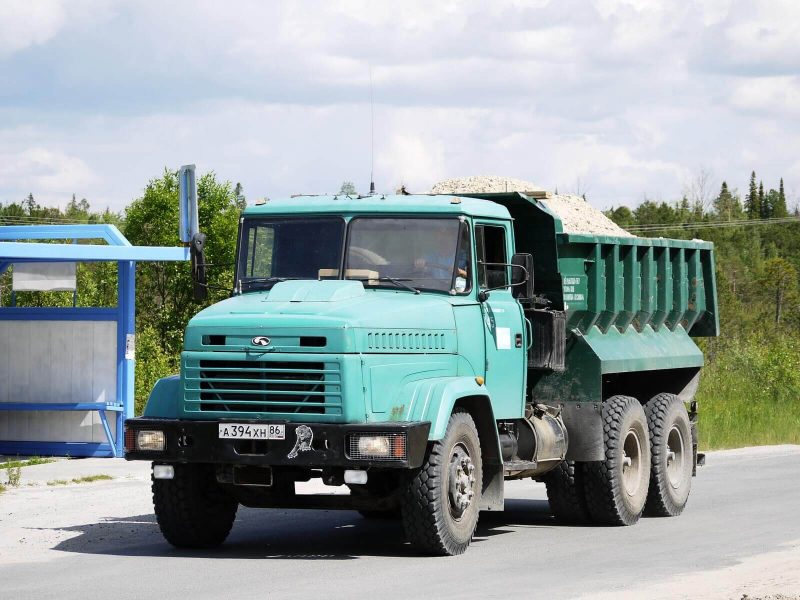 Despite its long history of production, the KrAZ-6510 dump truck is still in use today. It is clear that the level of comfort of European analogues is still very far away, but the car of Ukrainian production can work in such places, where other dump trucks can be difficult.

It is not afraid of temperature changes, overloads, unpretentious, and can also work where there is dust. Therefore, the model is often used in various quarries and mining enterprises. And KrAZ has managed to serve as a faith and truth there for many years now.

Yes, the machine has not received a four-wheel drive system, does not have the same strong motor as KrAZ-6322. However, this does not mean that the vehicle can only be used on asphalt – its acceptable height of ground clearance allows it to function normally both on rough terrain and on light off-road terrain.

Model is not afraid of overloading, so you can do much less “walking” to save time and fuel. Of course, there are also newer and more advanced models, but if you need a reliable and time-tested employee – KrAZ-6510 – you are at your service.

We advise you to read the article: KrAZ – history of the Kremenchug automobile plant 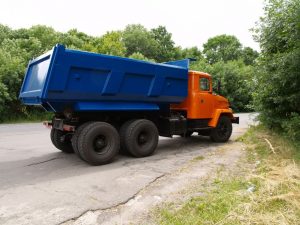 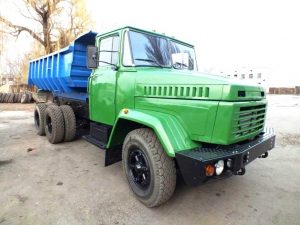 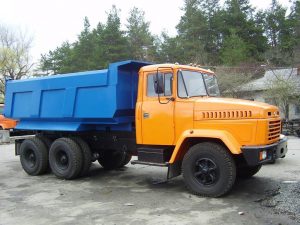 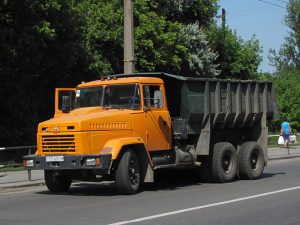 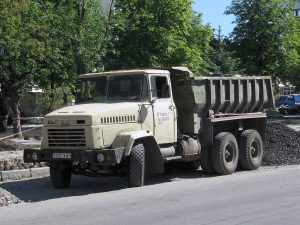 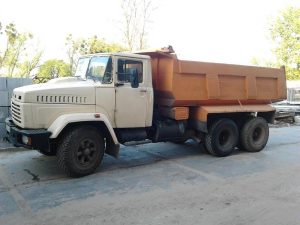 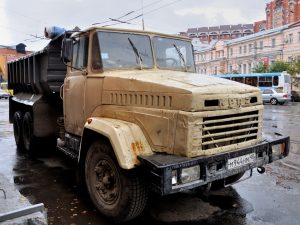 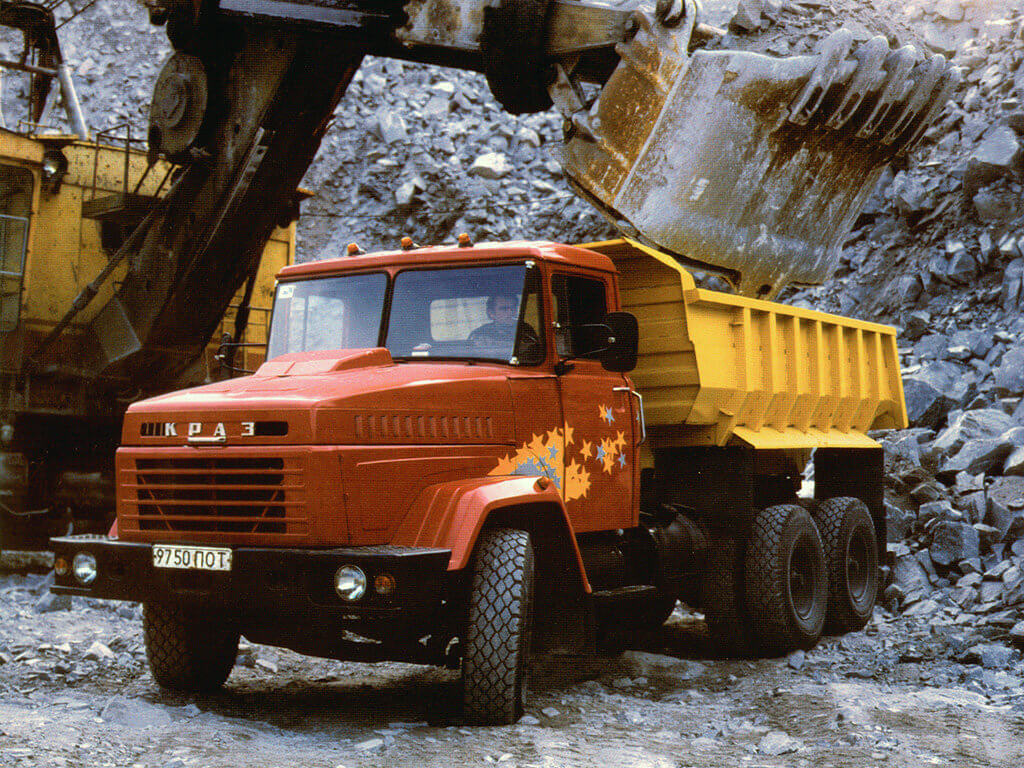 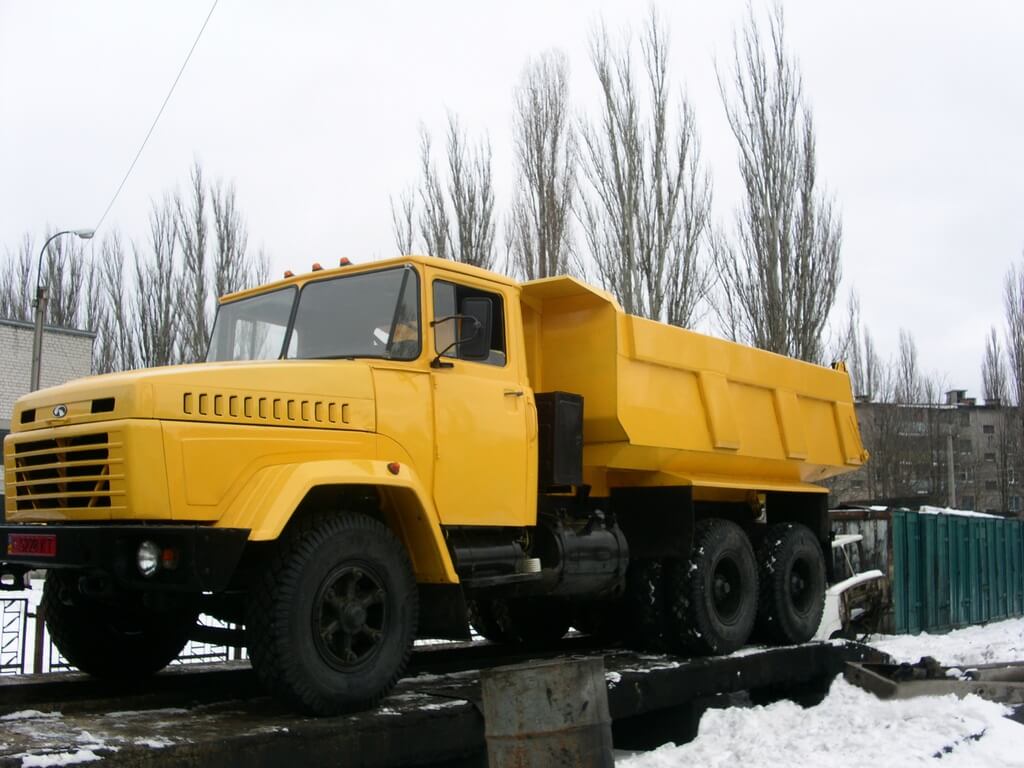