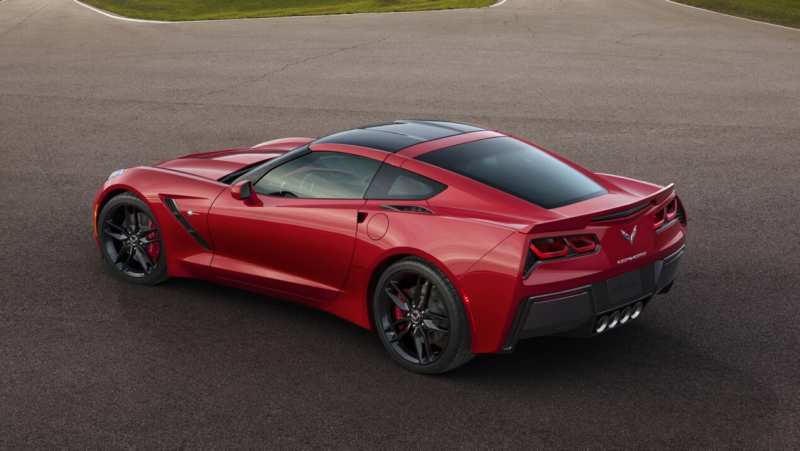 In 2013, at the Detroit Motor Show, a new Chevrolet C7 supercar was officially presented. The seventh generation of the car was purchased by the prefix Stingray, which was also used by Corvettes Corvette C2 and C3 generation. Looking a little ahead, I would like to say that this car used high-tech bodywork Chevrolet Corvette C7 manufactured in 2013-2014. Now you and I will be able to plunge into the world of restyling sports car. The whole model range is Chevrolet Corvette.

Record this American sports car in the squadron of sports cars can be on the presence of a long hood with the nose, like a predator, molten on the ground silhouette with a small cabin and chopped back. The American car turned out to be aggressive, impudent, in a good sense of the word, as well as quickly recognizable with the help of the daring front end of the car with a barbed eye of the headlights and the rear, which in turn received LED stuffing and 4-p nozzle exhaust system.

Not superfluous for the American supercar are 19-inch, installed in front and 20-inch wheel rims, which stand behind. How the exterior design of the new coupe and convertible Corvette looks like, many people estimate, as the real breakthrough of automobile artists from America. 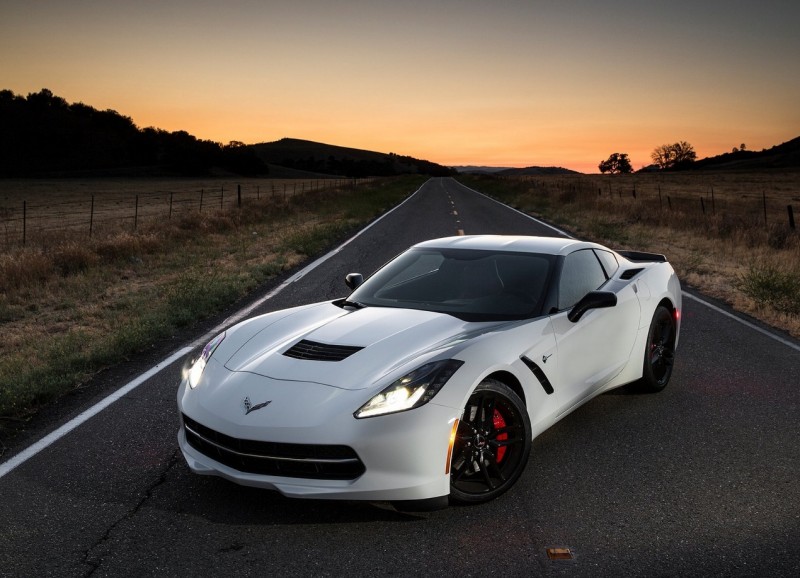 The surface of the body panels combines well the island’s facets with the waves and embossings, which are exquisite as well as pleasant drops. The Chevrolet Corvette C7 Stingray has aggressiveness, dynamism and assertiveness, and ultimately stylishness and beauty. The body component of the new Chevrolet C7 Stingray’s Corvette has now increased its torsional stiffness by 57% over the previous generation of C6 bodywork.

This was achieved by means of a spatial frame, which was made of aluminum and laser beam welding. The front and rear suspension also features lightweight aluminum parts. The hood and roof part, which is removable, were made of carbon fibre, and the wings, together with the doors and some invisible body parts, were made of complex composite materials.

The design staff achieved a perfect 50/50 weight distribution on the axles. Due to the fact that aluminum, carbon and composite materials, which were produced with the introduction of nanotechnology, made it possible to reduce the total weight of the new sports car by 45 kg, if compared with the sixth generation. And this despite the fact that the size of the new sports car has increased. 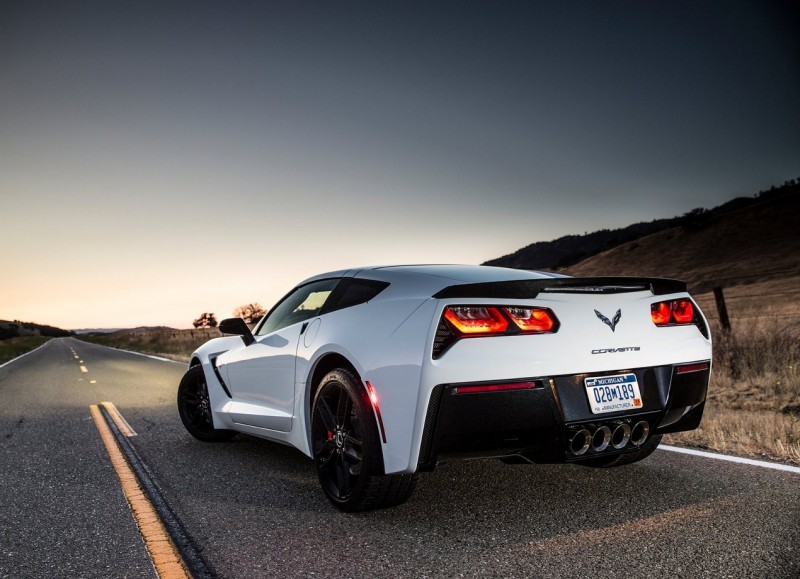 Four exhaust pipes look quite unusual, because they all fit in the center. Ed Welburn and Kirk Bennion worked together to give the new sports car a new and refined look. This model will be presented in the body of the targ and roadster.

The most important thing to start with is that the Chevrolet Corvette C7 Stingray is still a two-person car, with no rear seats. American workers managed to pay much attention to the quality of interior finishing materials – now plastic is soft, which was so lacking in previous generations of Corvette. The interior was covered with suede and high quality leather.

Stingray’s steering wheel can be adjusted in terms of outreach and angle of inclination – which is very pleasant, because even on expensive cars, the steering wheel is always adjusted only in terms of angle of inclination. The console, located in the center, is strongly turned to the driver, which makes it similar to the German BMW E34 and BMW E30. 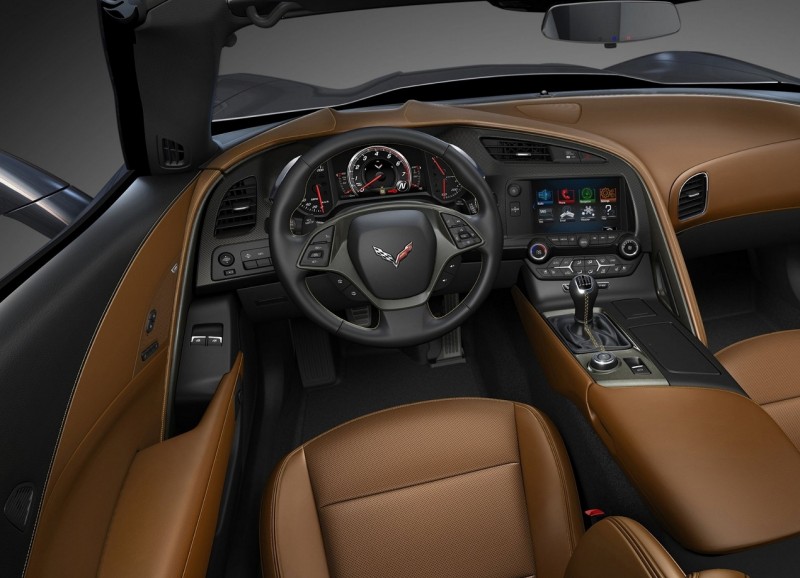 The standard equipment of the compartment includes a two-zone climate control system, cruise control, rear view camera, 8-inch touchscreen display, heated and ventilated seats. To date, the ventilation system can be found only on premium cars, a similar function is sometimes only found in the body of a business class sedan. Chevrolet Corvette C7 Stingray armchairs are adjusted not only in longitudinal direction, but also in height with the support of electric drive.

BOSE serves as the standard music system and has 9 speakers. The luggage compartment has about 425 litres of free space. It is worth mentioning that the interior of the car is assembled manually, and as a material used leather Napa, micro-rubber, aluminum and carbon. Seats, which have a bucket-shaped sports shape and are only of profile depth, have a magnesium alloy and can provide a sports landing. 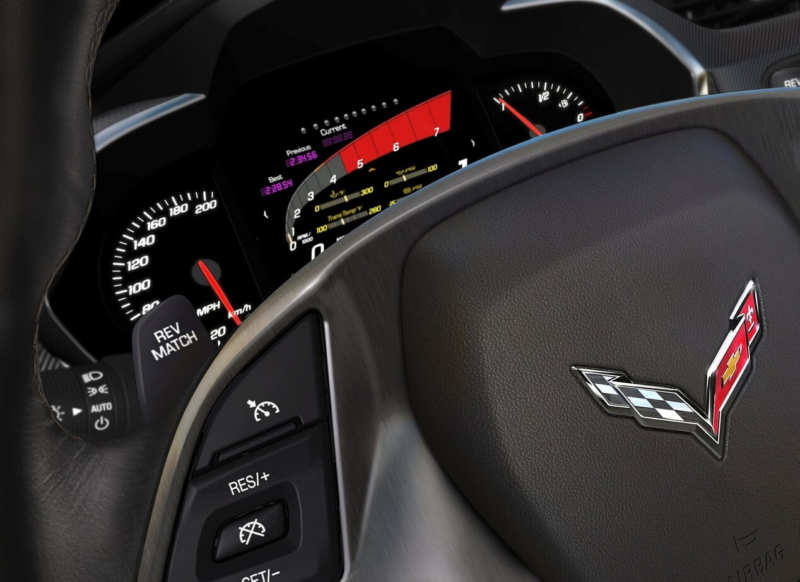 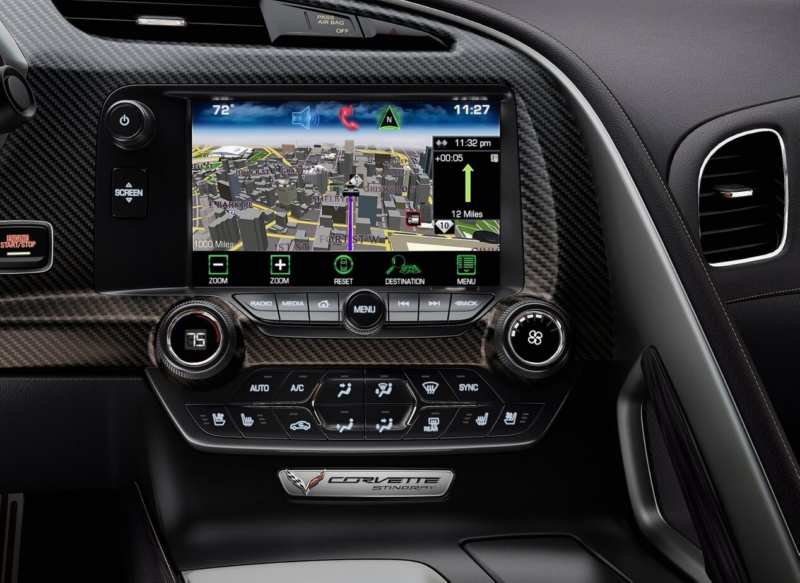 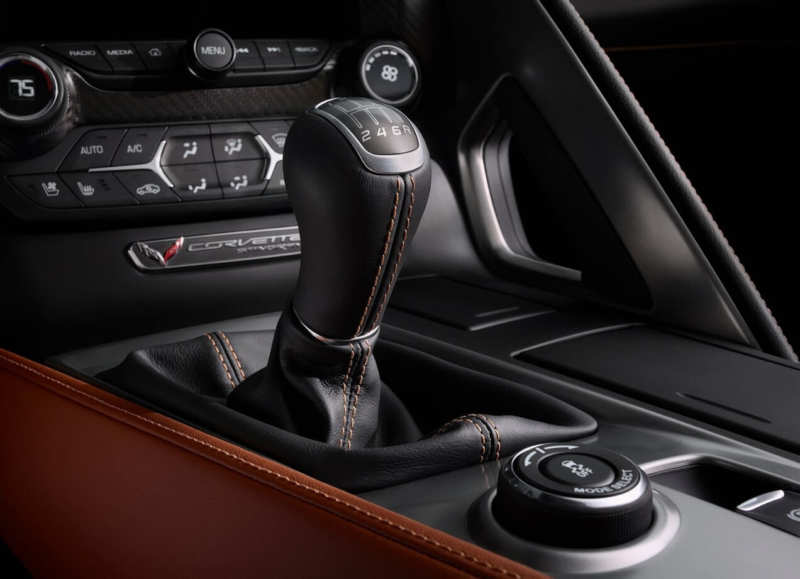 The steering wheel has a diameter of 360 mm and leather is used as a finishing touch, so it fits perfectly in your hands. It is important to note that the 8-inch display is duplicated by a projection system on the windshield. Devices are able to change the light illumination, depending on which mode of adjustment of the machine will be chosen Mode Selector Drive (5 modes of operation of adjustments by the engine, transmission, steering wheel and chassis).

Also on the console, installed in the center, you can find adjustments of the multimedia system Chevrolet MyLink, maps of the navigation system and the image from the rear view camera. Dual-zone climate control setup center with a small screen, which displays the climate control settings on the console as well. Generally speaking, the interior of Chevrolet Corvette C7 Stingray has become more chic, has received improved equipment for comfort services and acquired a lot of electronic services.

The first hundred, the Chevrolet Corvette C7 Stingray, reaches it in 3.8 seconds. In the automotive markets of other countries, there is a modification of the Corvette Z06, which has a drive supercharger Eaton and a capacity of 650 horsepower with 880 Nm of thrust. Such a very powerful engine is synchronized with the 8-range automatic gearbox. The standard Chevrolet Corvette C7 Stingray weighs about 1,539 kg.

The vehicle was designed according to the transaxle scheme, where the transmission is placed on the rear axle with an excellent weight distribution of the car on the axles. It is noteworthy that the electronically controlled shock absorbers are filled with magnetorheological fluid. The steering wheel has a rack and pinion steering with electric power and variable capacity and variable gear ratio. 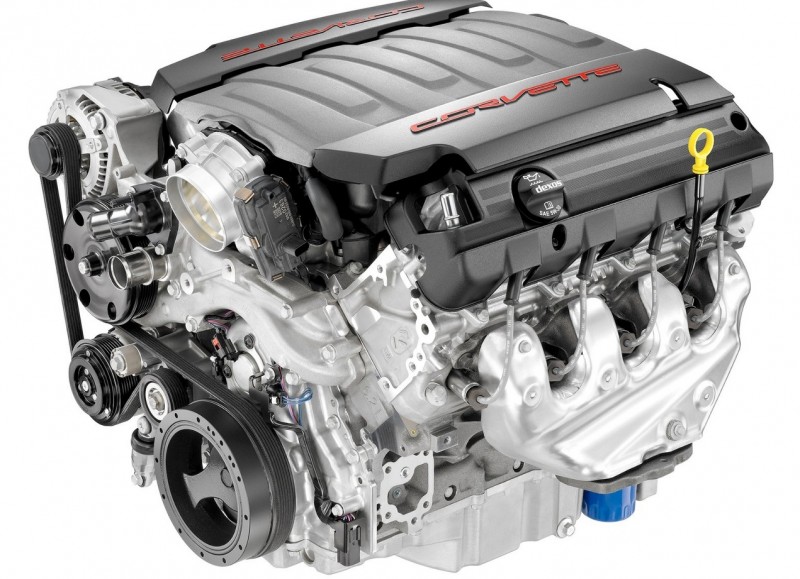 As a braking system, there are four-piston brakes from Brembo with 345 mm of discs in front and 338 mm of discs on the rear wheels. However, as a basic modification, the vehicle is equipped with 320 mm front brake discs). Mode Selector Drive settings service allows you to change about 12 main settings, including the presence of UTC (throttle settings), ABS settings, engine traction settings, Paddle-shift automatic transmission (knows how to change the speed of gear shifting on the automatic gearbox), Active Fuel Management (makes it possible to save fuel), settings of the volume of exhaust sounds, Launch Control (provides maximum dynamics), Stabili Trak stability control (can change the modes of stabilization service), Magnetic Ride Control (can change the degree of damping of electronically controlled shock absorbers), Steering Assist (setting the functioning of electric power steering), Gauge cluster configuration (change the settings of the monitor, located on the dashboard and the main screen, located on the central console), as well as Electronic limited-slip differential for Z51 (option can adjust the modes of electronic differential).

The Z51 Performance Package is available with an electronic self-locking differential, 345 mm diameter front brake discs and large 19″ front and 2″ rear wheel discs and a brighter aerodynamic dodger body to unlock the high-tech features of the chassis, powertrain and transmission.

If we talk about the overall dimensions of the Chevrolet Corvette C7 Stingray, the original car occupies 4,493 mm, the width – 1,877 mm, and the height of the car is 1,239 mm. The wheelbase is 2,710 mm. The width of the front and rear tracks is 1 600 mm and 1 568 mm, respectively. Clearance of the updated supercar changes from 90 to 105 mm, which attracts it to the ground, thereby increasing maneuverability and stability at high speeds and corners.

Also, it is necessary to mention the increased safety, in particular, the installation of a more efficient braking system, which makes it possible to reduce the braking distance by 9%.  The Chevrolet also has an Active Handling system with xenon headlamps with a power of 900 lumens, which provides the maximum range of visibility. If the wheel descends – no problem, a special function will be activated, allowing you to get to the nearest service station at a certain speed.

If the 2LT version is estimated at 71688.00 USD, the modification of 3 LT with an extended list of accessories will be estimated from 73274.01 USD. Taking all this into account, there are only 4 official dealers in the Russian Federation, where 3 of them are in Moscow region, and the last one is in St. Petersburg. 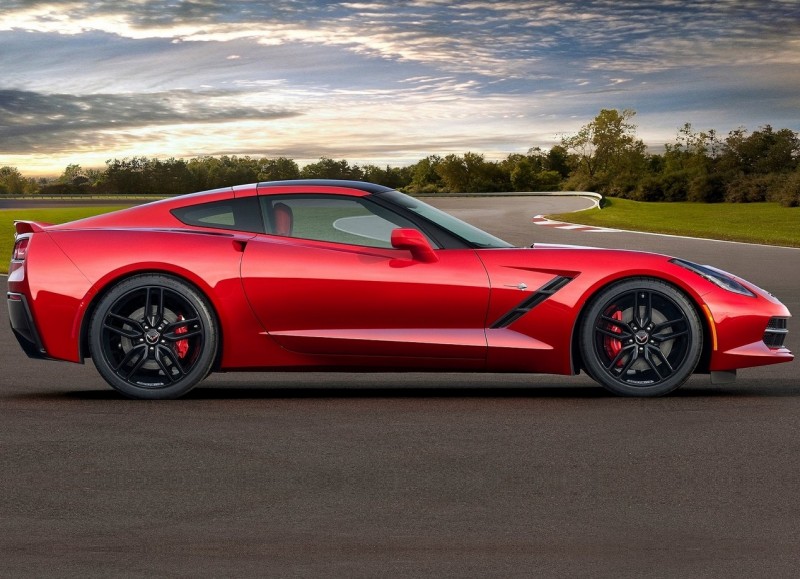 The 3LT is also equipped with a standard navigation system, as well as the body colour finish of the cabin parts. In addition, a small list of optional equipment is included for the American sports car. There is also support for Russian and European maps, the possibility of installing a removable roof made of carbon, steering wheel with Microfiber trim, racing seats, brake caliper, black spoiler and mirrors for rear visibility.

As a result, the seventh generation of Chevrolet’s C7 Stingray Corvette is just great. What’s worth is the exterior design of the car, which is modern, sporty, stylish and eye-catching. Low ground clearance, will not allow you to drive without interference on our roads and at the cottage, but this American car and was not produced for these purposes. This clearance allows it to be dynamic, confident at high speeds and steep turns.

We were pleased to have an LED lighting system. Inside the Chevrolet Corvette C7 Stingray everything is in place. Here you can find an 8-inch screen and projection screen, as well as an electronic dashboard. Everything is intuitive and easy to reach for the driver. 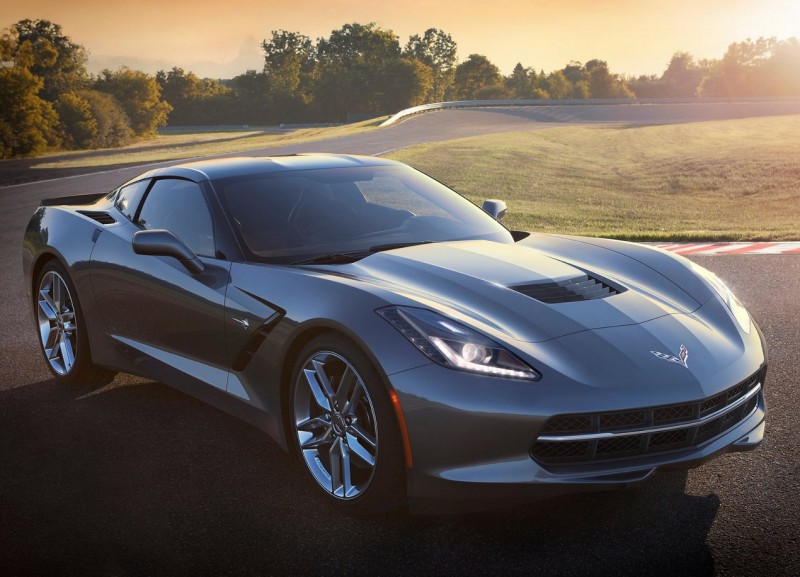 Seats, though they do not have maximum settings, but they are very comfortable to sit in and they have good side support. It is not clear why, but there are no seats at the back – although in principle, having this car, you would hardly want to be a driver of a “shuttle taxi”, driving people – it is a more personal car. Body materials have been made from lighter yet more durable materials, which reduces the weight of the vehicle without losing its stiffness.

You won’t lack the power of a 6.2-litre engine – it will give you the opportunity to feel superior when you’re on the road with other cars. A large number of electronic control systems make the car better, easier to drive and safer. In the end, I would like to sum up that this Chevrolet Corvette C7 Stingray 7th generation car has turned out to be quite successful.

We advise you to read the article: Chevrolet Corvette history 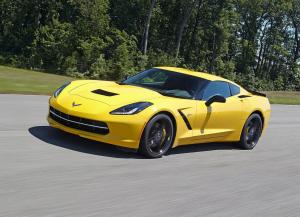 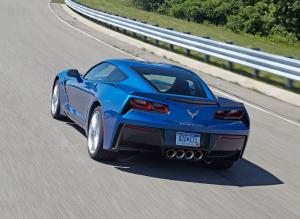 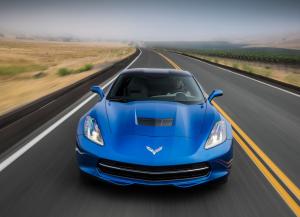 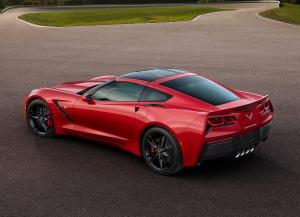 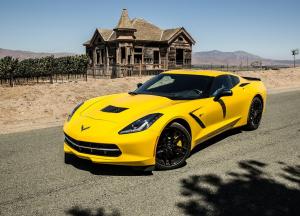 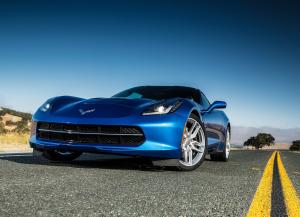 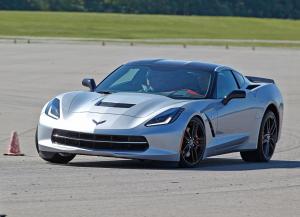 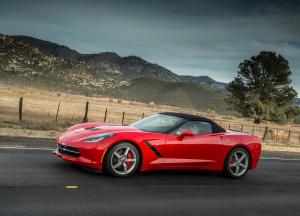 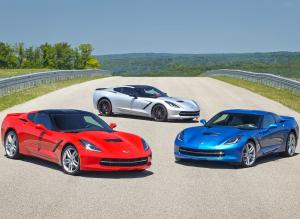