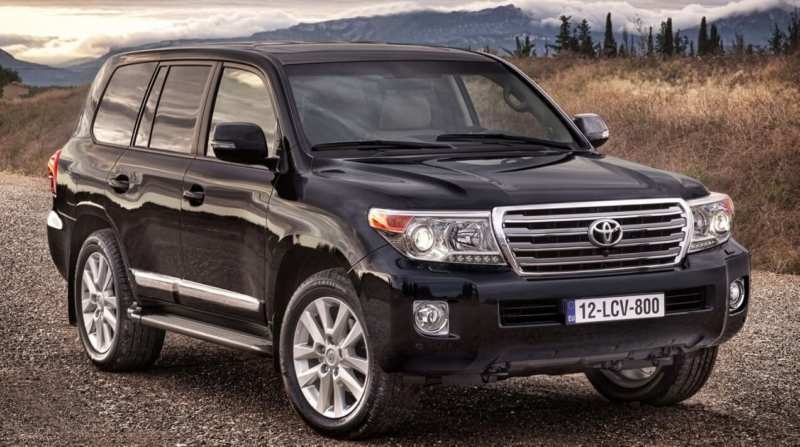 The Toyota Land Cruiser 200 is either a five or seven-seater all-wheel-drive SUV based on the Lexus LX570. The Japanese company produced this car the longest since 1951. It has replaced the well-known to all Toyota Land Cruiser 100, and, although they still have their own differences, they have basically the same design. The whole model range is Toyota.

The Japanese restyling model looks no less spectacular than the previous one, the 100th. The 200th model has a new radiator grille, headlights and body panel elements reinforce the effect of a reliable and massive SUV much better. The vehicle itself was designed on the frame structures of the body and has an independent rear suspension. However, if we compare it with its younger brother, we can say that the new Cruiser has increased rigidity of the body.

Moreover, the two hundredth has lost its geometric all-terrainability, but on a bad road, as well as then, there are very few cars of such sizes that can comfortably overcome all kinds of obstacles. Similar jeeps, betting on their own off-road properties, sacrifice the quality of the ride on the road section. However, it should be noted that Toyota Land Cruiser 200 with the help of the KDSS system has significantly increased the hardness of stabilizers. 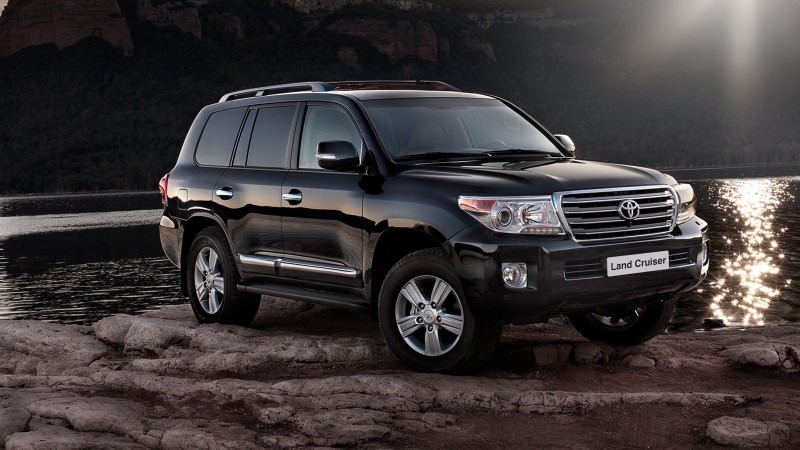 If we take into account such a moment of increasing body stiffness and a list of completely new technical modifications, the machine has become perfectly controlled on the road and has excellent information. It is also worth noting the almost complete absence of rolls of the car, especially if you look at its weight. Among the new features is the modified shape of the combined taillights. The front ones now have more voluminous shapes due to the convexity of the outer line.

Filling of headlights has also undergone restyling – they are used in both near and far light only by xenon. A small camera is barely visible on the redesigned grille lining. The exterior mirrors are now visible in a more modern way, thanks to the lightweight restyling. At the bottom, along the lines of the doors, you can see a chrome lining designed to decorate the car’s view. And a strong footrest is made for easier landing in the considerable Toyota Land Cruiser 200 2015 and to protect the body.

If you open the door of a jeep and drive it, you can see at once that the interior of Toyota is really kind and ergonomic, you can feel the Japanese style. The interior of the Cruiser 2015 gives all passengers the necessary comfort atmosphere, but this cannot be attributed to the third row of seats, they will be comfortable only for children. It is impossible to say that sitting in Japanese, there is an exquisite design and rich finishing, but everything is quite comfortable. And there are not so many changes in the interior itself. Engineers tried to fill the salon more. 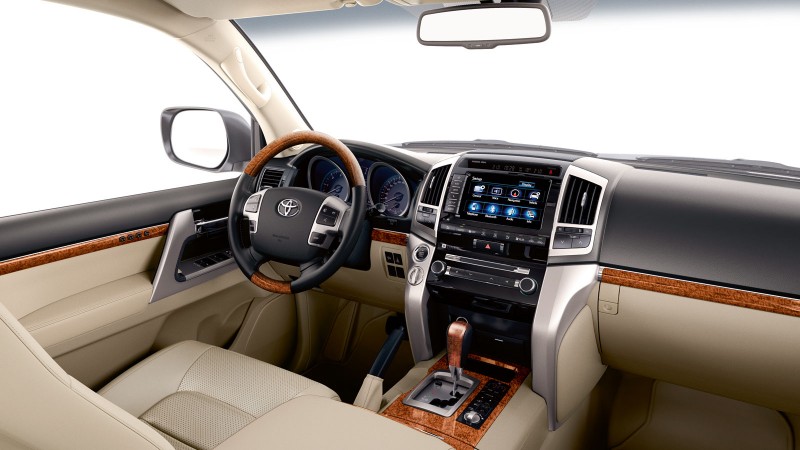 According to the reviews, it can be concluded that there is much more space and comfort inside the jeep. An updated range of interior colours has been introduced. Paying attention to the dashboard, it can be concluded that the main panel has acquired a larger on-board computer screen and a new dashboard edge. Owners say a lot about each chair, as it provides the highest level of comfort. The successful positioning of sensors and other parts on the dashboard does not leave without a good impression.

Produced by Toyota Land Cruiser 200 2015 with a 4.4-liter diesel engine with an output of 235 hp and a gasoline engine, 4.6-liter capacity and 309 horses of power. Both engines are synchronized with the 6-speed automatic transmission, which has a sequential mode of change of gears. In America, the car comes with a 5.7-liter V8 VVTI engine – giving 381 hp. An independent spring suspension is installed at the front. 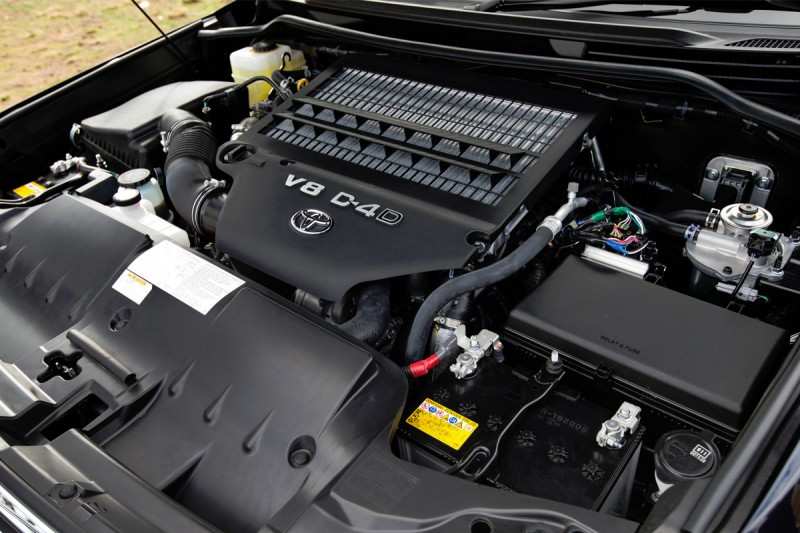 If you pay attention under the hood of the regular off-road vehicle cruiser, you can see the presence of an atmospheric V-shaped “eight”, the volume of which is 4.6 liters. This power unit is equipped with an aluminum cylinder block, direct fuel supply function, chain drive of gas distribution mechanism and gas distribution phase change system. At the peak, the engine produces 309 horsepower at 5500 rpm and 439 Nm at 3400 rpm The engine was synchronized with the six-speed automatic transmission. And the all-wheel drive transmission allows you to accelerate the huge car to the first hundred in 8.6 seconds and reach the maximum speed within 195 km/h.

According to the passport, the fuel cruiser spends about 13.9 liters per 100 km in mixed mode. There is a variant of another choice – a V8 diesel engine with twin-turbo and direct fuel injection (in this case solar fuel) under the pressure of Common-Rail. Its volume is 4.5 liters and it can produce about 249 horsepower. Such an engine works together with an automatic gearbox and all-wheel drive. Fuel consumption is much lower – it is about 8 liters in combined driving conditions. The “two hundredth” model is equipped with a permanent 4-wheel drive with interaxle differential, which is locked, free between the wheels differentials and lowered side by side in the dispenser. 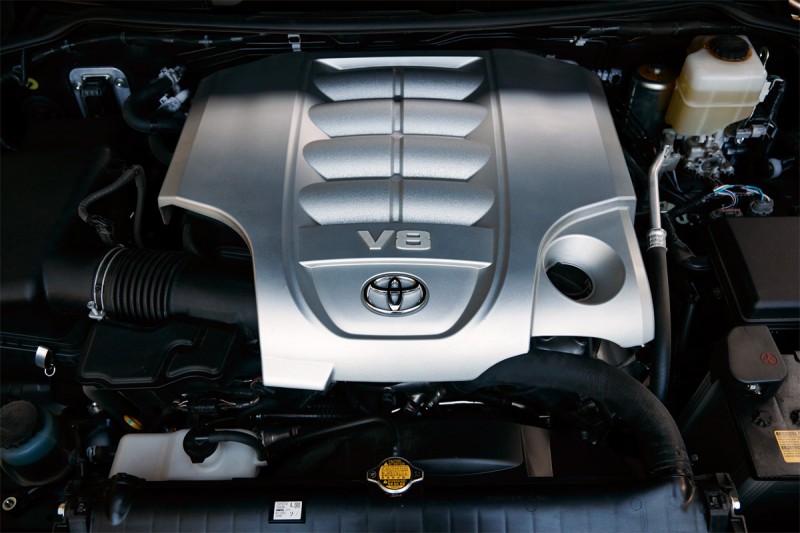 Despite the fact that all this applies to the mechanical part, it also has a large spectrum of electronic software. In standard conditions, the traction is transferred between the rear and front axle in a ratio of 40% / 60%. If necessary, torque distribution to the front axle can be activated from 30 – 60%, and to the rear axle from 40 – 70%.

The Land Cruiser 200 was based on a standard frame design with independent suspension on a pair of parallel levers and the Panara thruster, which found its place at the rear. The jeep was equipped with a rack and pinion steering mechanism, which includes a hydraulic booster. In the role of the braking system are powerful ventilated discs on each wheel.

The arsenal of the new Land Cruiser 200 Toyota includes a wide range of excellent off-road services, including: off-road turn-around assistance, active anti-spin option, four cameras for clear images around the perimeter of the car.

Moreover, the following special systems were used to improve the safety of the vehicle:

August 2015 was marked by the appearance of a restyled SUV. The Japanese man bought a completely new one in front of a completely different optics and radiator grille. Located in the center of the ribs, as if cutting the headlights in half. The changes also affected the front bumper, fog light sections, hood, rear lamps and the chrome bar underneath. In addition, a couple of new body painting options were introduced for Toyota Land Cruiser 200 2016 – dark blue and brown.

Speaking of the interior, there was a new steering wheel, a slightly modified console installed in the center with a new display for the multimedia system, the diagonal of which was 9 inches. The screen already on the dashboard was enlarged to 4.2 inches. An additional option was the available black roof. It is necessary to mention the presence of additional electronic assistants. 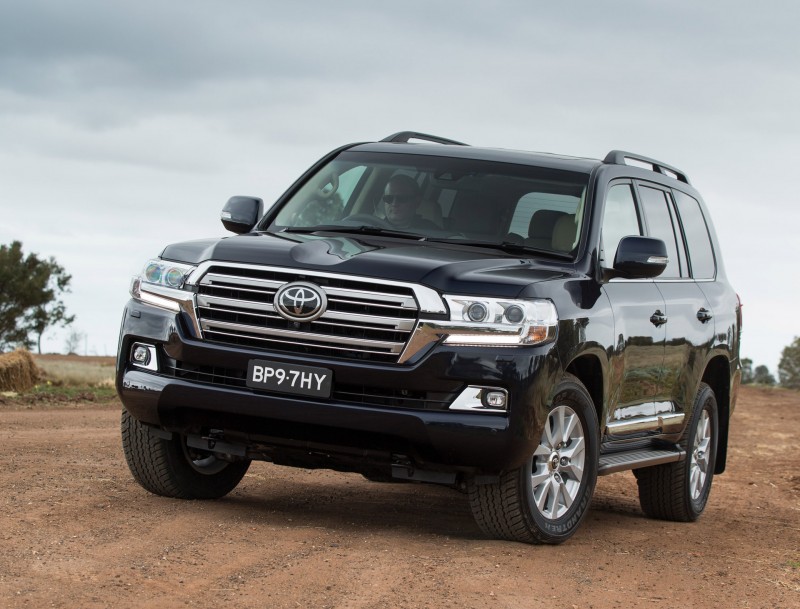 Probably the main trump card was the availability of the basic package of safety Toyota Safety Sense P, which includes adaptive cruise control, information and warning service on side impacts with the option of automated stop, the sensor of pressure in the wheels, the system of automatic switching of long distance lighting to the near, monitoring of road markings and “dead” zones. The cameras allowed viewing everything at 360 degrees, with the possibility of tracking under the bottom of the car.

As for the power units and transmissions, the gasoline “eight” became a little more economical, but retained its power. The gearbox remained the same – 6-range automatic transmission. And the diesel engine with a volume of 4.5 liters became a little stronger – its power is 272 horsepower.

The Toyota Land Cruiser of 2015 will be remembered for its impressive appearance, innovative all-wheel-drive system, powerful engines and a surprisingly spacious and beautiful interior design. The ability to position the cameras at the front and rear indicates the desire of the Japanese to make the movement of the driver and passengers, as well as other road users, as safe as possible. 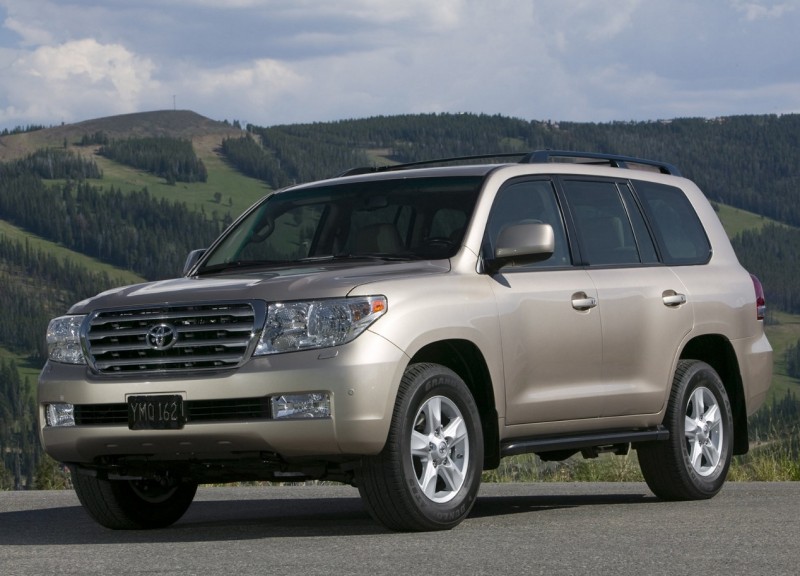 We advise you to read the article: Toyota’s History 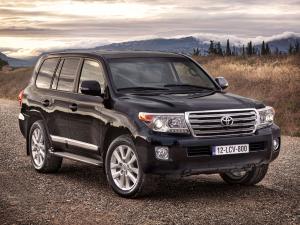 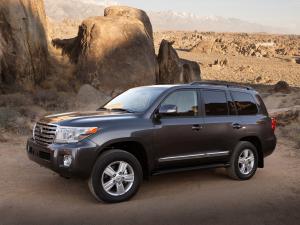 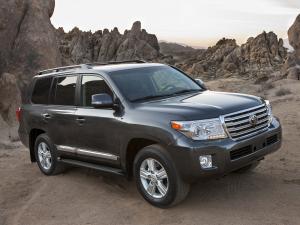 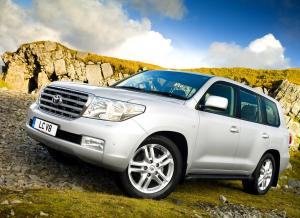 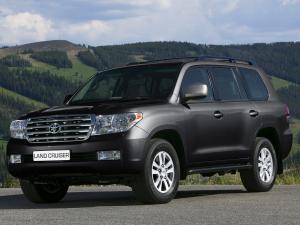 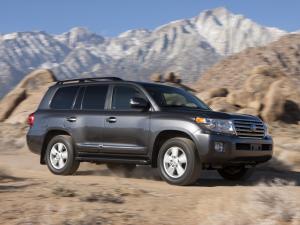 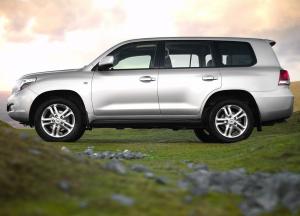 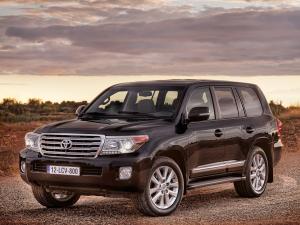 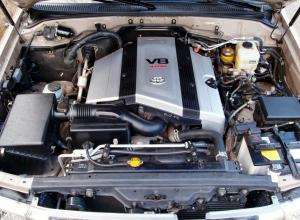 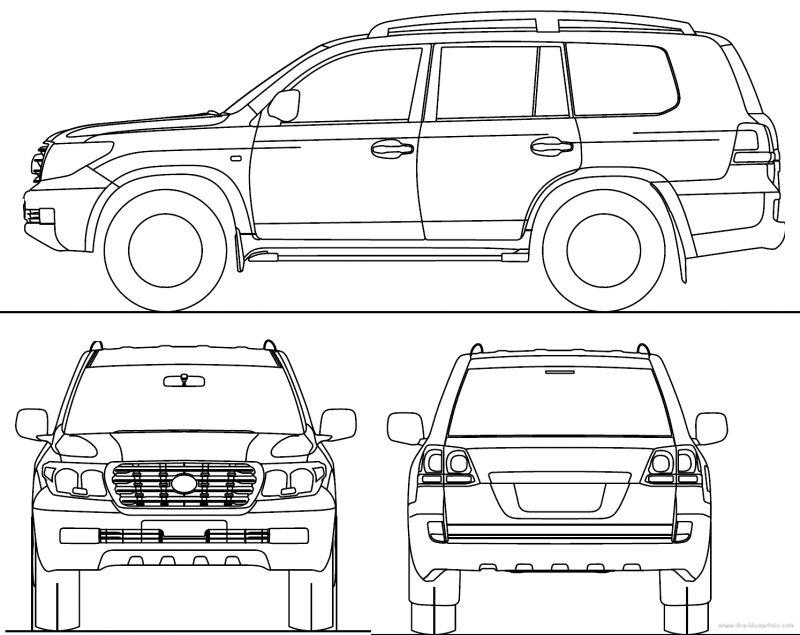