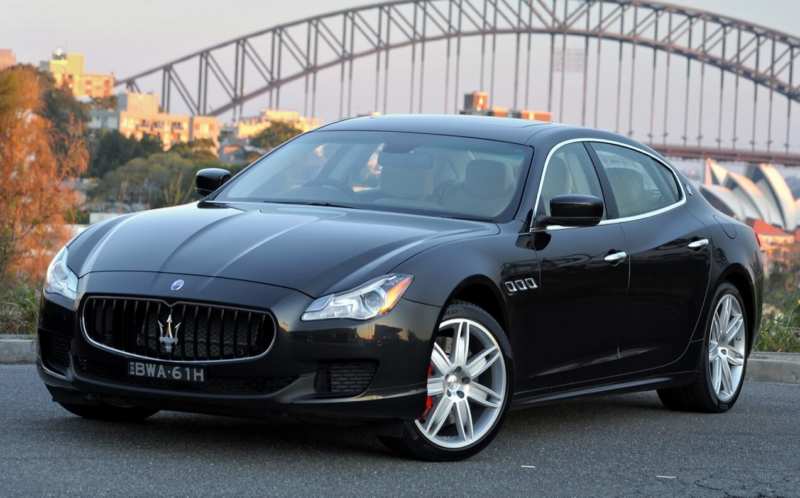 Maserati Quattroporte is a luxury sports sedan produced since 1963 by a large Italian manufacturer Maserati. Totally six generations of this car have been produced since that time. The first generation, Quatroporte, saw the light, as we have already mentioned, in 1963, was produced until 1970. But the second one did not appear at once, but only four years later.

The same amount of it was produced, until 1978. The third generation was presented a little earlier, in 1976. Production of this generation lasted quite a long time, even until 1990. Again, the company decided to take a break. Quattroporte 4 came off the conveyor in 1994 and was produced for six years. In 2003, the fifth generation appeared. The sixth generation of the model was presented in 2012 and has been produced since 2013. The whole model range is Maserati.

The leading car company Maserati is one of the best in the world, among the luxury class. The new sporty sedan features the latest design, a much better interior design, an increased body size, powerful engines, a new gearbox and suspension, all-wheel drive function and many other high-tech applications that are aimed at increasing the controllability, dynamism and maximum speed of the car.

The engineering staff of the Italian company did not bypass the issue of fuel economy, thanks to which it was possible to reduce the weight of the car. It was also possible to provide the rear passengers with more free space in order to accommodate them comfortably. 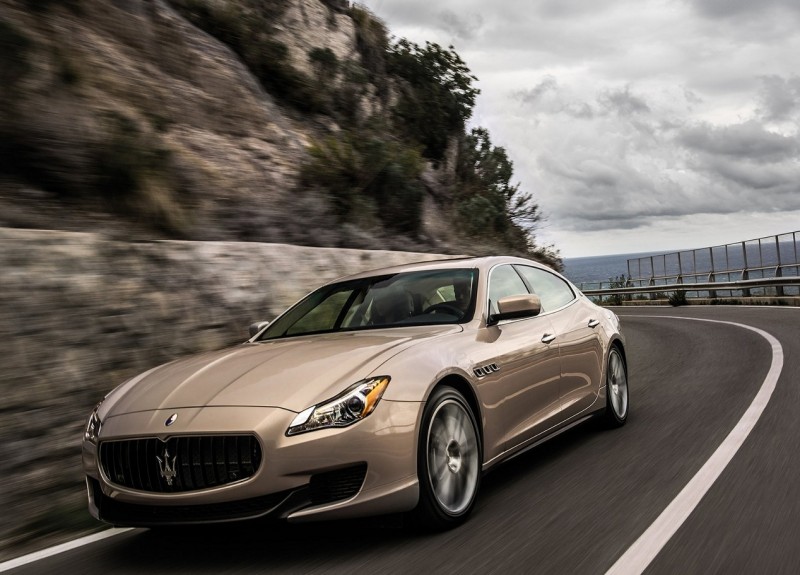 Available in a wide range of colours as standard. There are 15 colours available in several shades. These include black, grey, blue and green, red and yellow. Moreover, it will be possible to order additional painting of the caliper in black, blue, yellow and red.

In addition, it will be possible to make two additional variations of the Maserati inscription in black and red on the brake mechanism, which is gray. The appearance of the new flagship car among the line among the Italian company is hard to describe, because it is very beautiful and original. The sedan looks elegant, graceful and has smooth lines and graceful shapes. 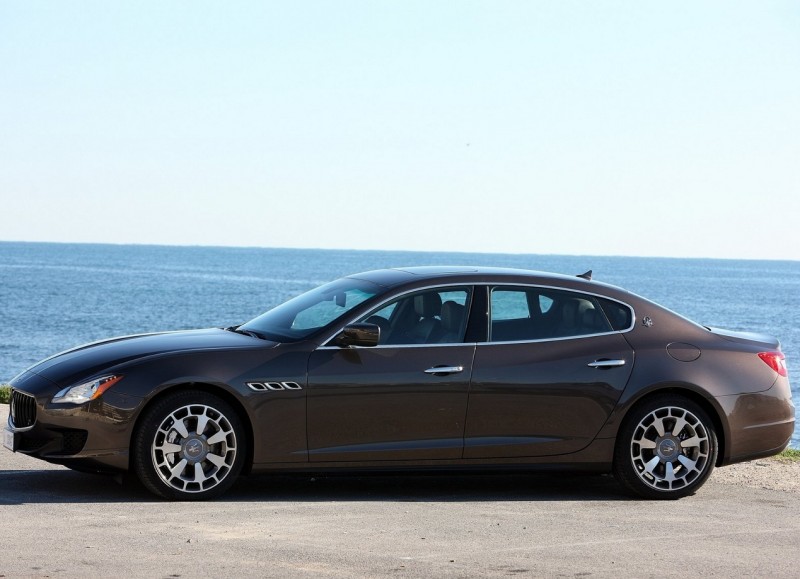 The exterior of the car was changing, acquiring the necessary number of innovations. The nose of the Maserati Quattroporte looks aggressive and challenging when compared to the previous model. This has been achieved with the help of the fresh “formidable” optics mounted on the headlamps, air intakes, which seem to smile and a radiator grille, which looks convex. The updated hood received elegant curves, which gives a neat appearance to the car.

The side of the car is slightly similar to its competitor Porsche Panamera Turbo C. The main difference is the ventilation holes, which have different shapes – they are made in the form of three “petals” in an Italian car. They perfectly harmonize the door handles made of chrome, Maserati nameplate and futuristic version of the wheel with a radius of 19 inches, which are “wrapped” in tyres Pirelli P Zero. 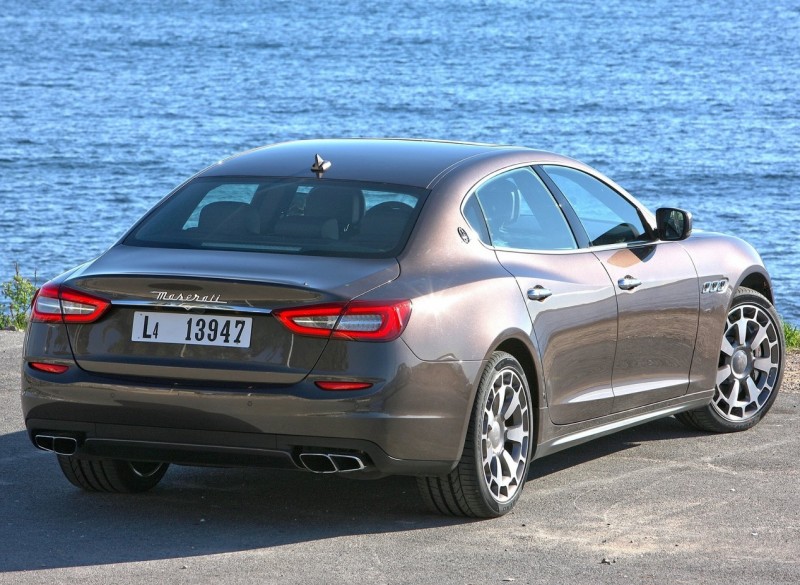 But the stern is a little embarrassing. If you do not use the filigree Maserati’s “Quatroporte” stampings, you can find a lot of things similar to the Audi A4. However, this does not take away from us the attractiveness of the car. It is worth looking at a strong exhaust system, which consists of two twin pipes.

If we take into account the opinion of the expert staff, the sound of the power unit is one of the most powerful and pleasant, among the cars of this class. In general, despite the fact that the car has much in common with its predecessor, it has acquired new bumpers, optical light amplifying system of aggressive type, luggage compartment cover with built-in spoiler and other rear lights.

The new model can be recognized by the auxiliary windows on the rear posts and a clearly visible line that runs on the side, which previously did not exist. This generation of a luxury sedan with a sports slope Maserati Quatroporte was able to preserve the familiar look of the body of the previous car, but the ratio has changed and the size has increased.

After we’ve talked about the changes in the exterior, you can look inside, what has changed there? And there are even more changes, and they begin with a new panel installed in the front and end with the rear seats. The newest multifunctional steering wheel with an electric drive of a steering column, the considerable colour display calculated on 8 inches and possessing touch input for adjustments of various options of the car which could replace the small display and set of keys under it has been established.

When you pay attention to finishing materials, the price policy of the car automatically goes on the 2nd plan. It is possible to choose combinations for finishing materials on the ceiling, front panel, armchairs and floor. Leather, wood and carpet are available. 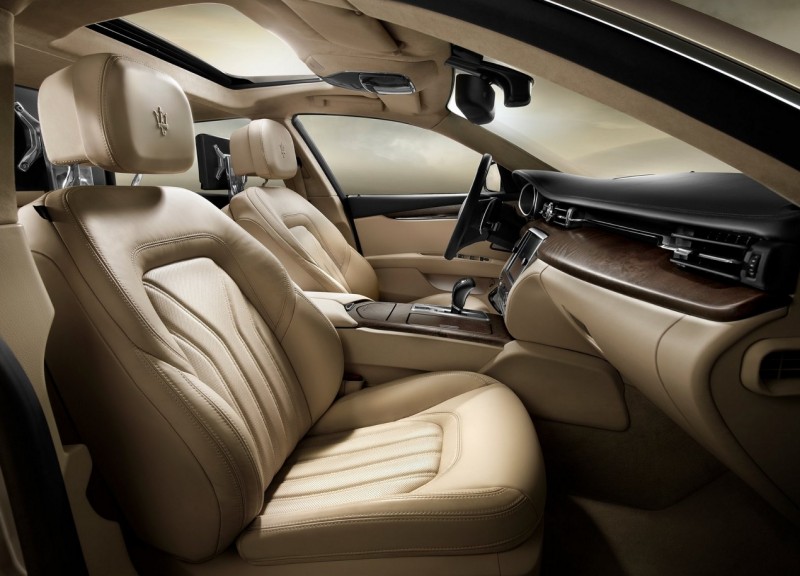 For the comfort of the driver and passengers there is everything that exists in the car market today. Cruise control, 2-Zone climate control, all seats are electrically driven, heated and ventilated, and these are just a few useful systems.

The rear row can be equipped with chairs for two or three passengers, and the free space will be enough everywhere. Rear passengers can stretch their legs as if you were in a limousine. In addition, the interior is not only full of quality and chic, but also cozy and homely. 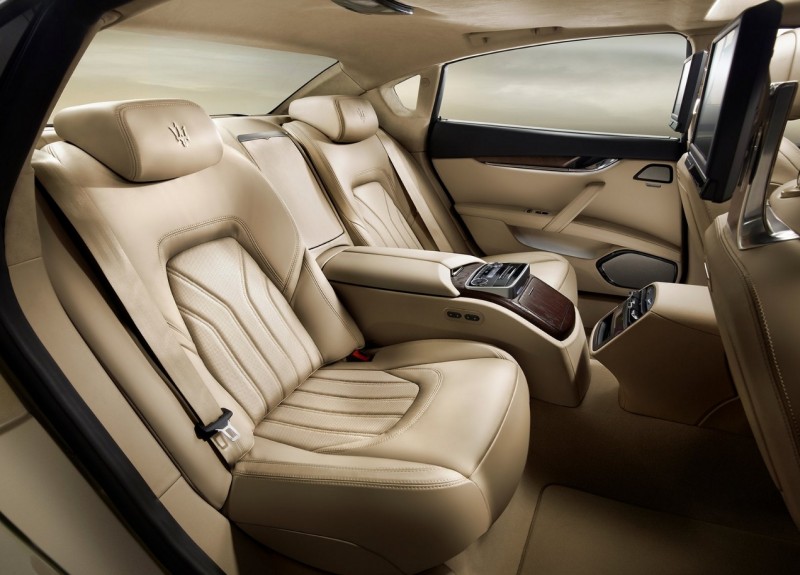 Among the major changes, we can highlight the torpedo, centre console and rear seats. The Maserati analogue watch is in its place. The dashboard’s illumination is pleasantly coloured, and the large multifunction steering wheel has petals that lie underneath it.

The salon looks stylish, expensive and beautiful. Due to the fact that the sizes have been slightly increased, the interior has become more spacious and comfortable. Interestingly, the button to start the engine is located on the left side of the driver.

Comfort inside the Maserati Quattroporte:

The standard engine for the new Maserati Quattroporte 2015-2016 is a gasoline powered V-type six-cylinder engine with a capacity of 3.0 litres and double turbocharging. It is able to develop power up to 410 horsepower. Thanks to it, the Italian car reaches the first hundred in just 4.9 seconds, and the maximum speed is 283 km/h.

The top-of-the-range 6th generation Maserati Quattroporte comes with a twin-turbo eight-cylinder 530 hp V8 engine. This “animal” allows you to reach a maximum speed of 307 km/h, and the first hundred to pass in 4.7 seconds. 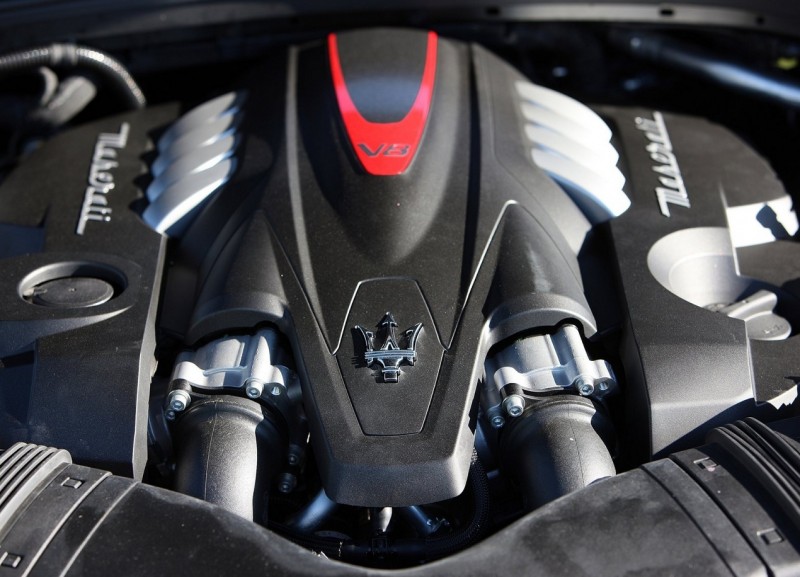 Both the first and second motors are synchronized with the eight-speed automatic gearbox. Later, it is planned to introduce a range of engines designed for diesel fuel, by the way, it will be the first such power unit. There is also a four-wheel drive version, but only with a 6-cylinder engine.

The all-wheel drive function has been designed by Magna and provides torque to the rear axle in standard situations. However, if required, it can be distributed in a 50/50 ratio. The suspension is independent of the double wishbones and can be fitted with adjustable shock absorbers (Skyhook adaptive suspension) as an option. Hydraulic power steering changes forces to determine the driving speed.

Due to the fact that lightweight aluminum was used for the construction of the bodywork and suspension elements, the car with an eight-cylinder V-engine was able to lose about 100 kg. The V6 weighs about 1,860 kg, and the V8 version weighs slightly more than 1,900 kg. It depends on which engine will be chosen, the consumer will have a choice of light alloy wheels with a diameter from 18 to 20 inches with a variety of designs.

The vehicle has passive safety and is included in it:

The cost of the Italian Maserati Quattroporte with diesel engine of the initial modification will be from $74410.08. The sedan version with 310 horsepower engine and all-wheel drive system S Q4 will cost from 5,290,000 Russian rubles. The top-of-the-line GTS version is estimated at 7,190,000 rubles. 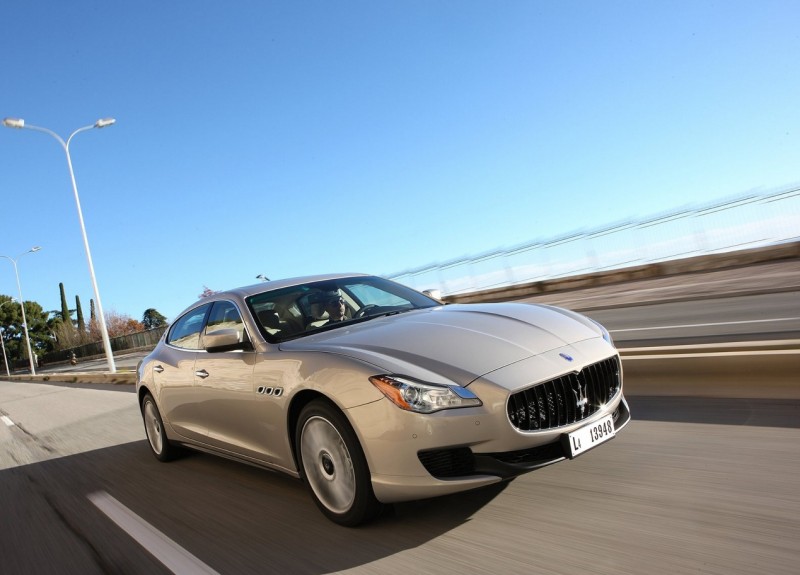 There is no doubt that Maserati Quattroporte turned out to be very successful after another update. Beauty, elegance of forms and lines, will not leave indifferent even the most avid critics. Getting into the salon, you feel like at home, everything is ergonomic, in its place, intuitively clear.

Not only the driver feels comfortable, but also the passenger sitting next to him, and the people behind him. Of course, such a car is not suitable for driving to the country house, but those who buy it, pursue very different goals. Being in the traffic flow, you will be recognized immediately and your car will be in the spotlight. This car is for business people and those who know the price. 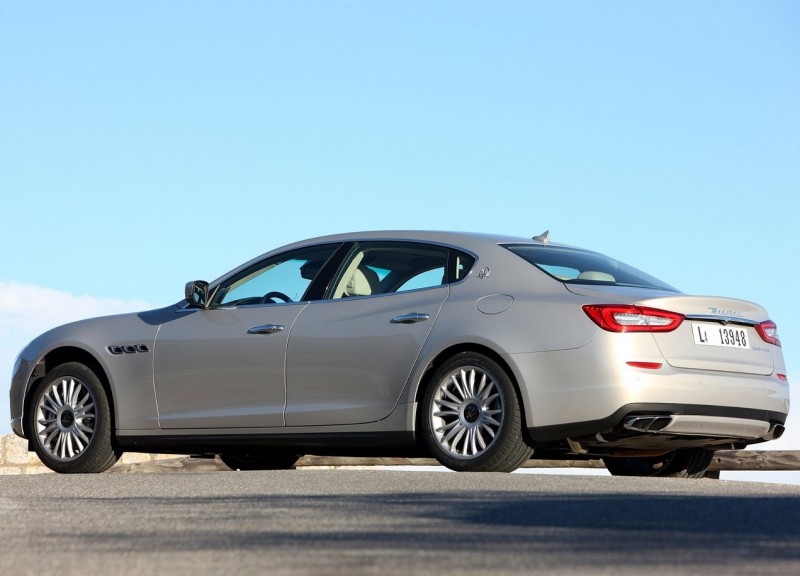 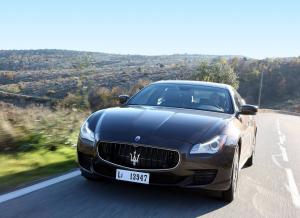 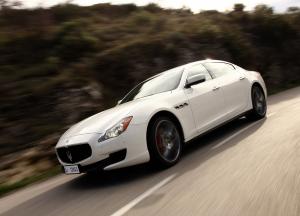 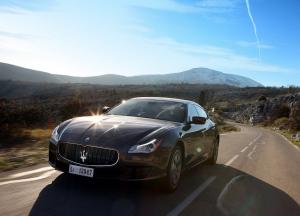 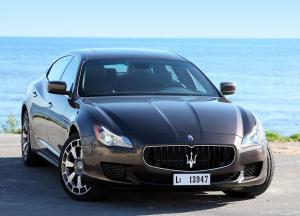 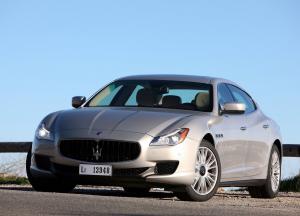 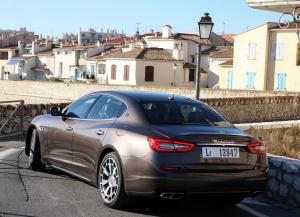 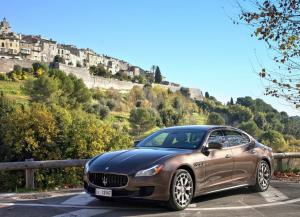 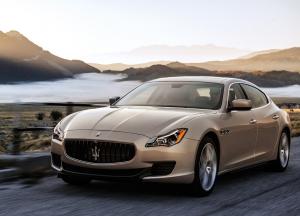 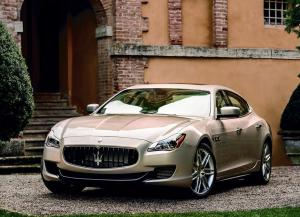