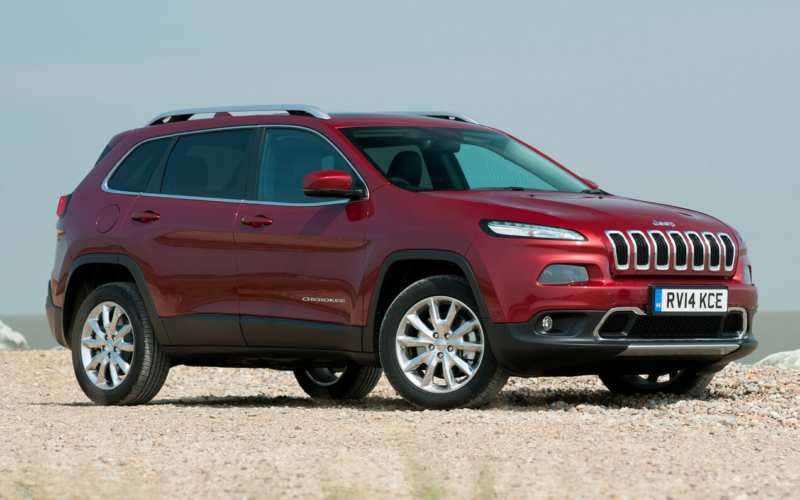 Fans of American SUVs were very happy to learn about the next generation of jeep Cherokee, which will be the fifth in a row. The car was presented to the general public at the exhibition in March 2013 at the New York City Motor Show. The main production of the model is established at the factory in Toledo. Our review will help you to get to know jeep Cherokee of the fifth generation. The whole model range is Jeep.

The appearance of the new Cherokee will be interesting and controversial at the same time. After the exhibition of the first models the car has both an army of fans and an army of haters. New jeeps will be delivered in the updated body of Liberty. The manufacturer has kept its traditions and installed a wide radiator grille with a notch in the center. A distinctive feature of the appearance is the elongated optics, which was not previously found on any of the models of jeep cherokee. Unusual appearance will allow the SUV to compete successfully for a long time. 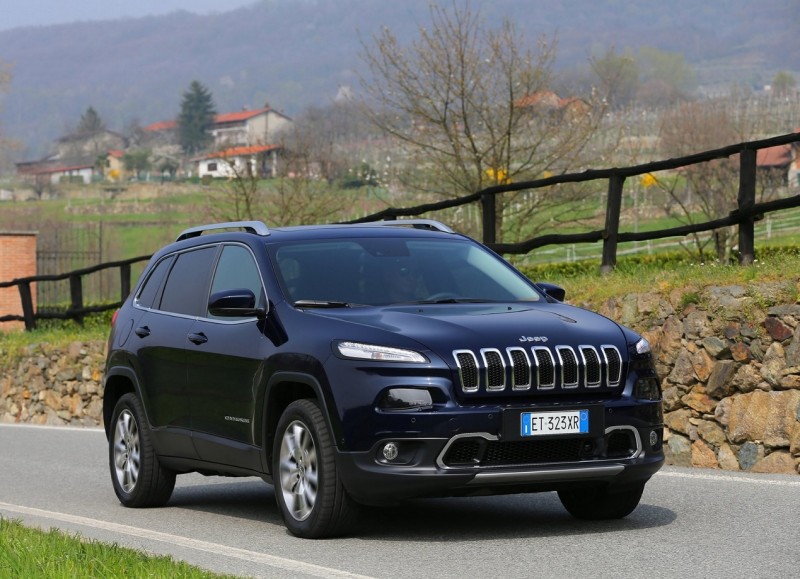 A 5th generation Cherokee jeep is more like a city parquet truck than an off-road car. Even though the off-road capability remains the same, scratching the body is easy. The car’s dimensions are medium in size, with the following indicators:

Those who follow the car market can not understand how American designers have decided to make such fundamental changes. It is clear that here it was not done without the influence of the Italian design studio. But still the Cherokee jeep 2015-2016 differs from the old models very much. There are several sets of cherokees: Sport, Limited, Latitude, Trailhawk. Each of them has its own characteristic features in the design, but in general the specific model does not differ from its brothers.

Trailhawk version is equipped with a reinforced bumper with plastic overlays to protect the body from external influences of aggressive environment. The new Jeep Cherokee looks fresh and attractive in our opinion. The seven already branded radiator grille slots emit an SUV in the stream. On the front bumper the engineers placed an additional air inlet. 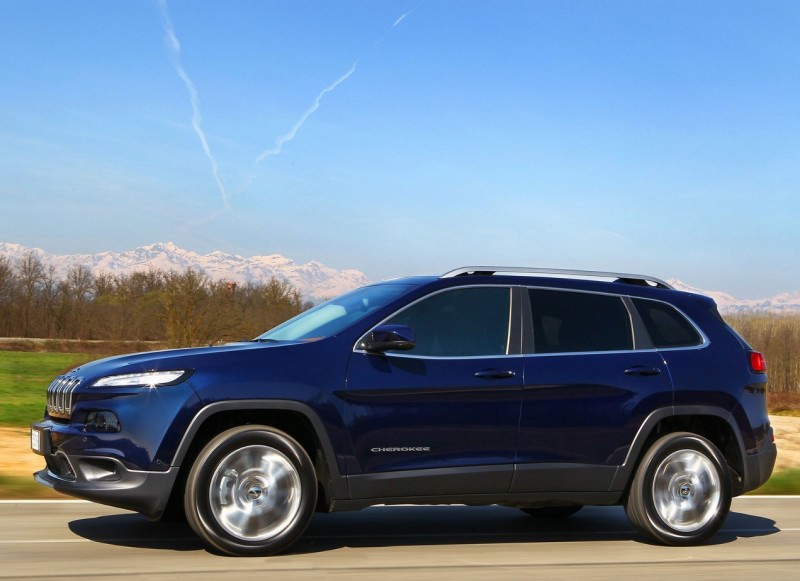 The headlights are now three-level. Pretty fog lights with large spotlights complement the lighting equipment. Waves on the hood, connecting the ridges look very bold and unusual. The fifth-generation Jeep Cherokee is equipped with tires with a radius of 17-18. On the back of the trunk there is a company logo – Jeep. If it wasn’t for it, this stylish SUV could simply be attributed to any car manufacturer in Europe or Asia.

The unique style and revolutionary design of the Jeep Cherokee breaks all stereotypes about the appearance of Jeep Cherokee. The handling of the car has been improved, this is stated not only by the manufacturer, but also by those who have passed the drive test. This was achieved by reducing the resistance to airflow.

Jeep Cherokee of the fifth generation can be the following color variations:

The new American SUV has been redesigned not only on the outside, but also inside. Many people will not like the weak side support of the front seats. But the rear seat is just magnificent and very comfortable. By the way, they are equipped with tilt adjustment and can automatically move back or forward. The sensation of being in the driver’s seat completely covers the disadvantages of sitting.

Ergonomics is at a very high level, with all the necessary controls within reach. The sound insulation of the passenger compartment must not be compromised, and no sounds from passing cars or engine operation can be heard at all while driving. However, the quality of the assembly does not correspond to the requested price for the car. Sometimes you can find various kinds of jamming. 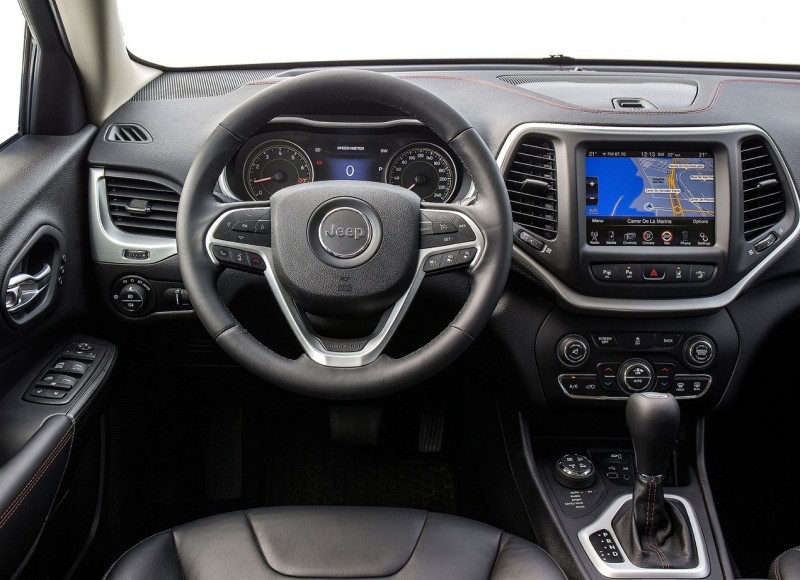 The disadvantage, which is obviously conspicuous is the glove box, it can only fit a mobile phone charger or a pair of gloves. The boot of the SUV has a capacity of 412 litres of cherokee in normal condition and 1,266 litres of cherokee with the rear seats folded down. It is also functional, equipped with a mesh and spare wheel, various hooks and grids for storing tools. Depending on the configuration, the Jeep Cherokee can be equipped with a 3.5-inch on-board computer screen or a functional, modern seven-inch screen. The on-board computer allows you to control all your vehicle’s systems and customize everything you need to meet your needs.

Advanced options that can be ordered: 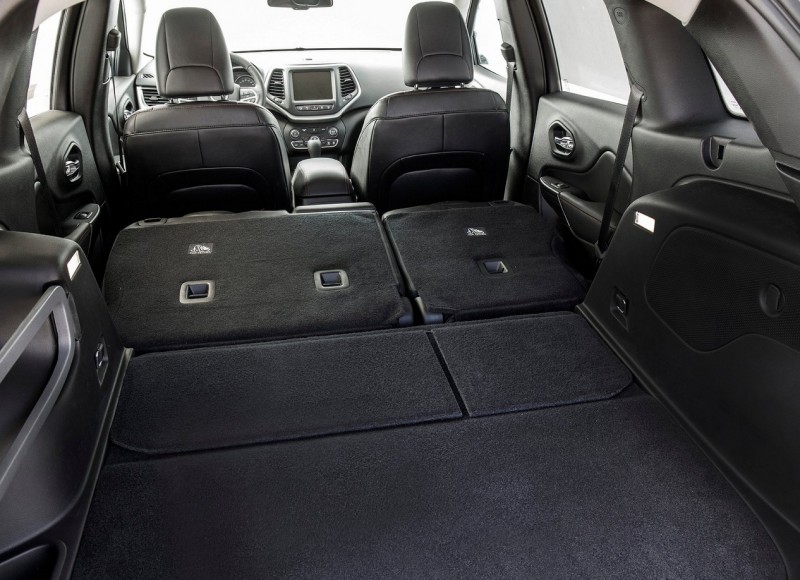 Lovers of quality sound will enjoy multimedia with nine speakers. Jeep Cherokee is equipped with all the necessary features and systems:

Three people can comfortably fit in the back of the car without having to lean against the front seat backrests. The steering wheel has been completely redesigned and you won’t find any of the details from previous versions of Cherokee on it.

The fifth-generation Cherokee jeep will be supplied to the Russian Federation with three engines, one of which is a modern diesel engine. The main engine will be a gasoline engine with four cylinders with a volume of 2.4 liters. The power of such a motor is 177 horsepower with 229 Nm of torque even at 3900 rpm. A modern nine-speed automatic is offered as a gearbox. Acceleration up to 100 kilometers per hour is possible in 10.5 seconds.

Fuel consumption is about 8.3 litres in a mixed cycle. The top-of-the-line gasoline engine will be the Pentastar engine with six cylinders and a volume of 3.2 litres. Maximum power is 272 horsepower at 6500 rpm. The nine-stage automatic machine allows the car to accelerate up to a hundred in 8.1 seconds with fuel consumption of 10 liters. 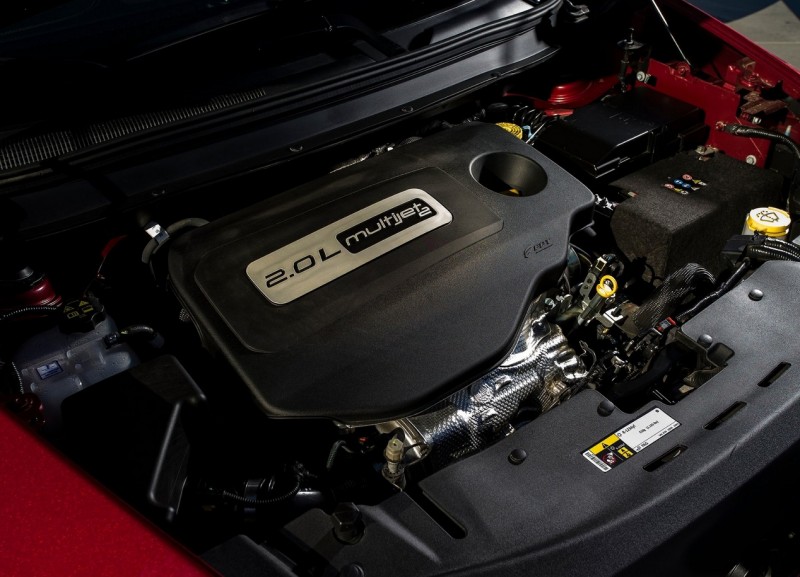 The third type of engine will be a diesel engine with Italian origin of two liters and four cylinders. With the support of start-stop system, turbine, fuel injection. The power of this engine is 170 horsepower at 4000 rpm. The manufacturer also does not allow to choose a gearbox for such an engine, jeep cherokee technical characteristics will be with a nine-speed gearbox.

Acceleration up to a hundred in 10.3 seconds. As for fuel consumption of a car with such an engine, it can be said that it is very small – 5.8 liters. Jeep Cherokee of the fifth generation is based on the Compact U.S. Wide platform. The suspension is independent on the McPherson racks. Rear multilever. The brakes on the wheels are disc brakes and the ventilated ones are mounted at the front on the front drive models.

In top models, the customer is offered full drive of several types:

Top-of-the-range equipment is equipped with a Drove Lock transmission, which in combination with the second type of all-wheel drive provides locking of the rear differential and adds a couple of centimeters of clearance. Jeep Cherokee’s fifth-generation tests showed excellent handling on any surface.

As we know, Americans are very strict about safety and reliability. Engineers Jeep Cherokee equipped the novelty with a number of modern safety and reliability systems, which provide peace of mind while being in such a car. As experts note, the new Cherokee is equipped with more than seven dozen modern systems. The new cruise control system is also new, which now not only keeps a distance from the front of the car, but also uses video cameras and radar to stop the car in case of emergency braking. 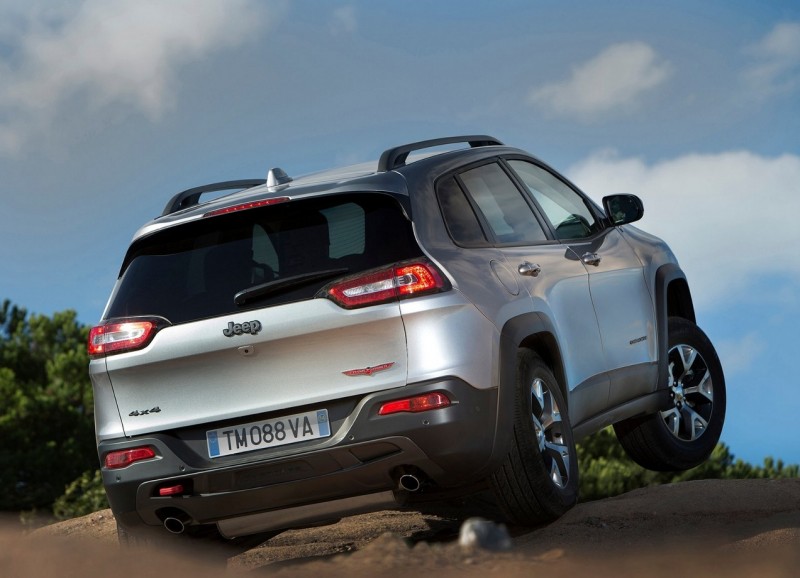 Now, even if another car is built in front of you, the system itself will automatically reduce speed to a safe level and avoid collisions. When parking, it will be very difficult to hit another car, because experts have equipped the jeep with innovative sensors that read the distance to obstacles and give the appropriate sound signal. The well-known company EuroNCAP, which evaluates the safety and reliability of cars, has estimated the new fifth generation cherokee of five stars!

The statements of many experts were justified, the weak point of jeep Cherokee 2015-2016 is its price. The cost of an SUV is well over two million. The simplest configuration will cost the buyer 2,049,000 rubles. The premium version of “Limited” is 2,890,000 roubles. A curious fact is that the diesel version will cost less by one thousand roubles. However even the simplest complete set is not deprived of functions, the car contains in itself: 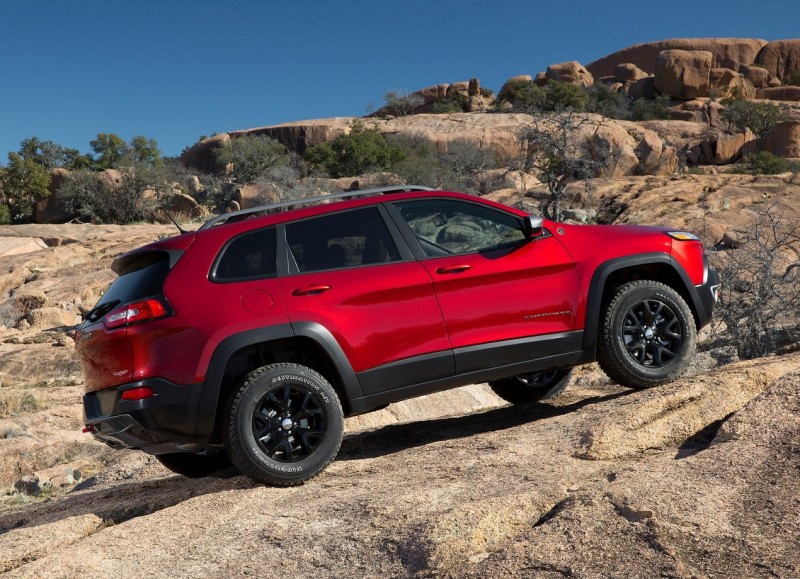 The car’s advantages include a wide range of functions and systems, even in basic equipment. Jeep Cherokee of the fifth generation is a rich, reliable SUV that attracts the eyes of others and inspires respect on the road. His advantages are:

Among the disadvantages it is worth noting that the car is not the cheapest in its class. Also the design of the novelty is rather contradictory. But nevertheless we are sure that Jeep Cherokee will find its buyer and win the hearts of fans around the world! 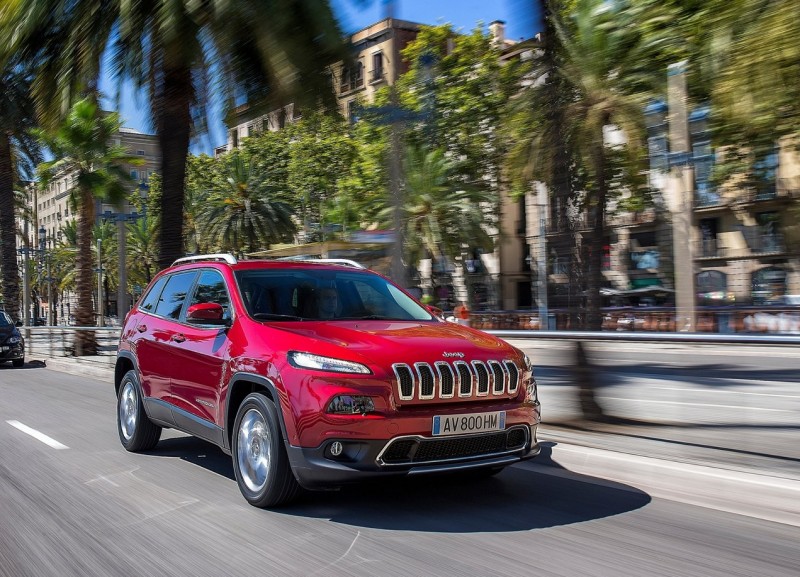 We advise you to read the article: History of Jeep 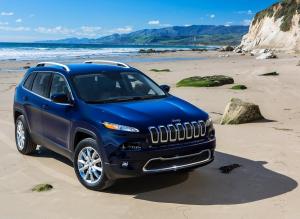 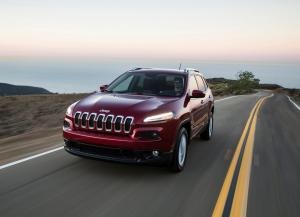 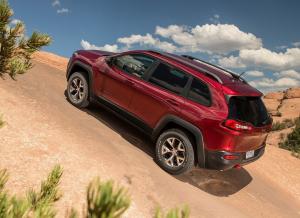 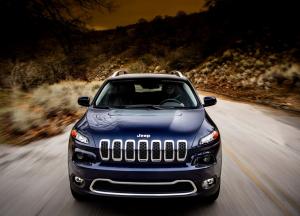 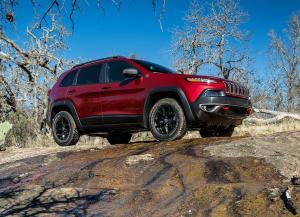 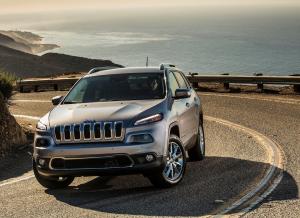 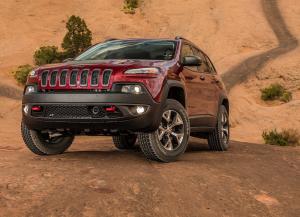 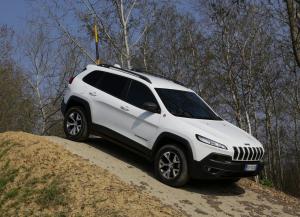 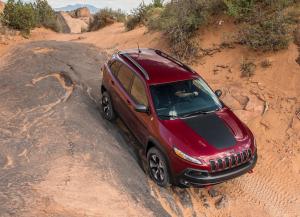