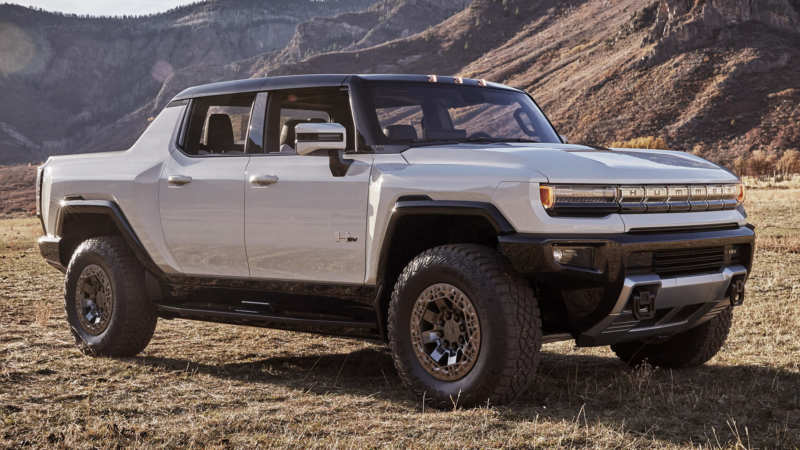 GMC Hummer EV is a line of American electric- powered SUVs and pickups manufactured by GMC (a division of General Motors). The American company has decided to revive the famous Hummer in the form of an electric pickup. They presented their novelty in October 2020. The entire model range GMC.

Exactly ten years ago, in 2010, precisely because of Hummer’s non-compliance with environmental standards, the company decided to abandon the off-road model. However, now General Motors has returned to the off-road market with the Hummer project, but already on electric traction. The electric model will be sold under the GMC brand in the pickup truck body, and GM’s factory in Detroit-Hamtramck will handle production. The industrial site has been renamed Factory ZERO and has been adapted for the assembly of electric cars. The investment amounted to $2,200,000,000.

The American novelty has retained the past pickup’s recognizable design elements but has been modified to a modern look. Only cameras for a general view can be 18 units. Looking at the Hummer EV’s front, a certain resemblance to its predecessor is noticeable, where a strict form prevails. The last SUV had a radiator grille and seven holes.

The novelty has a similar design, but instead of the holes, a line is used, consisting of LEDs divided into LED 7 cells. Each of these cells has its letter with the pickup’s name (for all cells additionally made backlight). On the sides, the engineers of the company applied fully LED optics, having pronounced vertical elements.

The front optics have not only been configured by the engineers to act as a light. It also serves as a battery charge indicator. 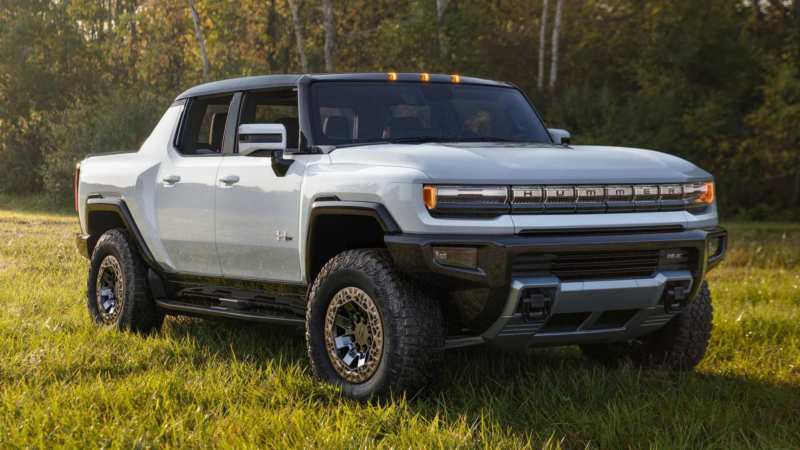 Completing the side of the side is yellow turn signals, which most manufacturers decide to give up. Below there is a place for a big bumper, which has two fog lights. It is also somewhat similar to the past Hummer but finalized, and all meet the latest trends in fashion. But there is a disadvantage because the coating is glossy, and overcoming a lousy road, the car will surely get small scratches and a layer of dust.

The front end’s central area boasts a small radiator grille necessary for cooling the battery under the bottom of the GMC Hummer EV SUV, two hooks for towing, and a protective cover. Because the front end does not have a traditional motor, instead, it decided to use a roomy luggage compartment, where you can put a variety of cargo or a removable cover “American.” The hood is equipped with an electric drive, which is very good because it is massive. It reminds me about the past model, the presence of 3 yellow lights in the first Hummer. 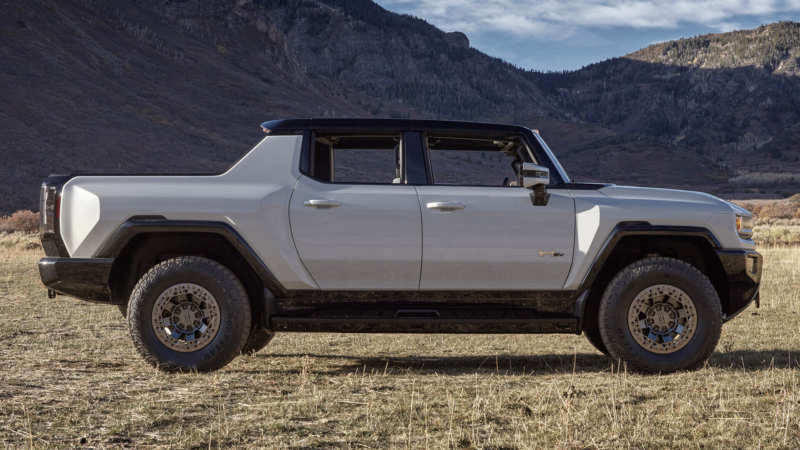 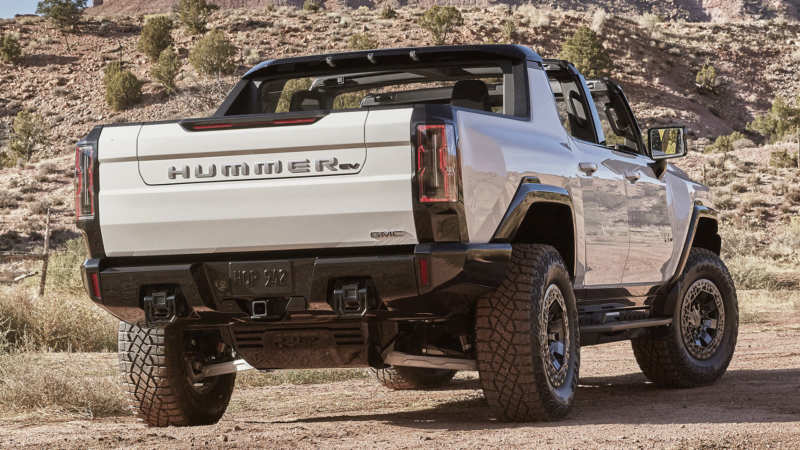 If we talk about the side of the Hummer EB 2020, it looks no less spectacular. Under the sharp-edged wheel arches there are large 35-inch rollers. It is simply impossible not to notice a huge clearance. The plastic protection of a body drops out of the general look a little.
Copped over from the previous version, the outside mirrors have a rectangular shape. They already in the basic configuration can boast heating, electric drive, memory, LED-ringers, and something else.

The electronics have been taught to analyze and exclude blind spots during the turn using side cameras and sensors. It turns out that the side mirrors can adjust vertically and horizontally, which guarantees the best possible view for the owner. Separately, it is worth mentioning the roof of the electric pickup. It can be removable and has three separate parts. Each part can be removed independently. The vehicle is supported by 35- or 37-inch massive wheels with off-road tires Goodyear Wrangler Territory MT. 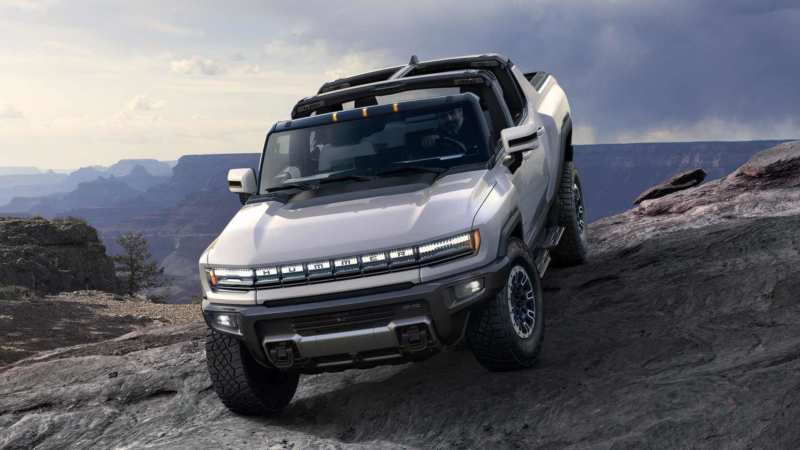 The length of the new electric Hummer is 5,507 millimeters. The wheelbase is 3 445 mm, and the width of the “American” is 2 201 millimeters. In the basic mode of air suspension, ground clearance is 257

Mm, and the depth of the ford is 660 mm. However, the most extreme mode is Extract Mode, available as a separate option. It allows you to increase the clearance to 404 millimeters and the fording depth – up to 813 millimeters.

The new model’s stern looks a bit simple, but it is not deprived of its tricks, which have not been found in other pickups before. Because we face a pickup truck, there is no point in waiting for many exciting things. On the sides, the car has vertical LED lights, which received pronounced elements inside. The central part is set aside under the traditional body side, but it is quite unusual in reality. Looking closely, you can see on the central region, near the inscription Hummer, a prominent upper part, as if a step.

In reality, it can be called a kind of step, making it easier to get into the body, as the height of the ground clearance is solid. Opening the board of GMC Hummer EV, the upper part can be unfolded. It is possible to organize a step. Besides, it can be used as a small seat, such as rest on nature. The body itself has compact inner wheel arches, which allow transporting bulky cargo.

It is nice that the creators have equipped the body with a good coating of abrasion-resistant plastic. The rear has three LED lights that illuminate the body and act as brake light repeaters. The rear window can be made movable, or it can have a small window that leads to the luggage compartment.

Unlike the new model’s exterior, which is slightly similar to the last SUV, the GMC Hummer EV’s interior was made unique. In front of the driver was installed a digital 12.3-inch dashboard, made in the form of a tablet. There is even no protective visor. A stylish, modern steering wheel, equipped with a massive rim, three spokes, and the traditional Hummer inscription in the center of the “steering wheel” has pleased. The steering wheel also has functional buttons and paddles, which are responsible for gear shifting.

It turned out a little rough if we talk about the car’s front panel, although it has no unnecessary elements. The central part is given to a 13.4-inch touchscreen entertainment center. In addition to adjusting comfort functions, the screen displays all the data about the car’s state. It also shows the video from cameras. There is a place for the climate control panel under the screen, which has two compact screens. 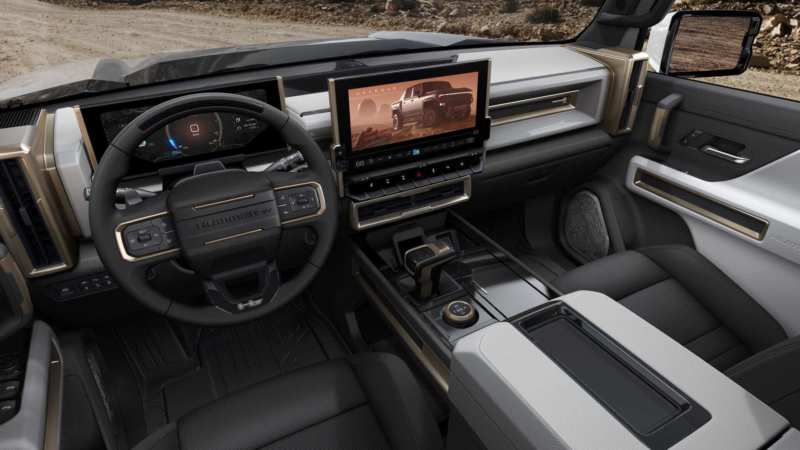 Down in the center, there is a block that controls the four-wheel-drive system, the parking assistant, as well as the emergency stop button. It is important to note that the buttons are of mechanical type, not of sensor type. The central tunnel ends with two air ducts framed in polished winged metal. The central tunnel has a simple design, the already standard gearbox lever, and a washer, selecting the driving mode. There are two hidden cupholders and two USB sockets, and wireless charging for electronic devices near the front passenger.

The American GMC Hummer EV 2021 pickup truck accommodates five people. The seats have a sporty shape, side support, and a high backrest on the front row. There is no memory function, electric drive adjustments, massage, and heated backrest and seats. There is almost no information about the upholstery. They will probably use quality fabric, leather, as well as inserts of polished winged metal or carbon fiber. 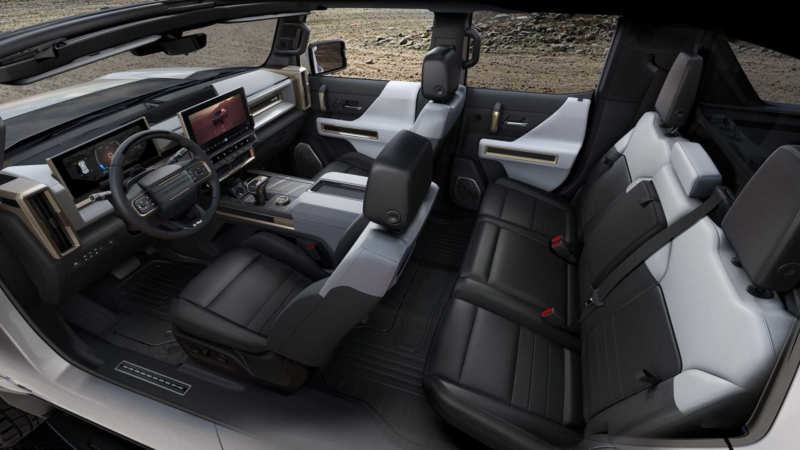 The large armrest, located between the front seats, has an extensive compartment inside and a modest recess outside for various small things. The rear row seats are almost indistinguishable from the regular SUV. They are equipped with separate headrests and a high comfortable backrest. The rear seats are as comfortable to sit on as the front seats. The armrest’s backside has a panel that controls the “climate,” two sockets, and a USB-connector.

General Motors plans to produce four versions of the Hummer electric pickup. The most initial version of the Hummer EV2 has two electric engines, with 634 horsepower (10,033 Nm). In this case, there is no fully steerable chassis, the suspension goes only on springs, and the range is 400 kilometers.

The top variant is the GMC Hummer EV Edition One, which has three electric motors (one installed in front and two in back). The total power is 1,014 horsepower (15,590 Nm). Such characteristics of GMC Hummer EV allow the electric pickup to reach 100 km/h in 3.1 seconds. This variant can go 560 kilometers on a single charge.

The new generation Ultium traction battery for the vehicle was developed together with LG Chem. The battery itself was placed under the bottom of the American pickup and protected by sheets of steel. The storm has 24 cells, lined up in two tiers, and has a low content of expensive cobalt in its composition. However, the capacity is not yet known.

If you pay extra, the 2022 GMC Hummer EV will be equipped with the latest version of the Super Cruise semi-autonomous driving system with a driver assistance feature. Thanks to this system, you can drive the car without the help of hands for more than 200,000 miles (about 322,000 km). Also, the system is equipped with a lane change function in automatic mode. 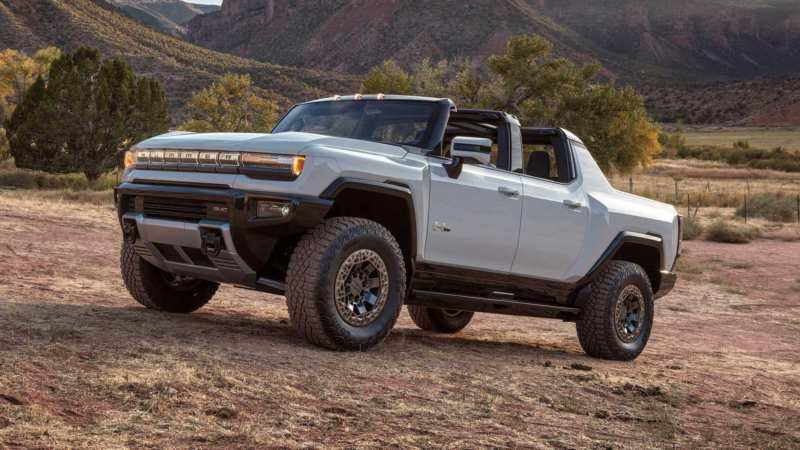 The GMC Hummer EV has built-in cameras that allow drivers to maneuver over rough terrain.


It was decided to use a new universal modular platform as the base. The suspension on all wheels here is of independent type. As a separate option, it is possible to install an air suspension, which has adaptive shock absorbers, allowing to adjust the height of ground clearance in the range of 149 mm. Also, the electric pickup has a fully articulated chassis. The rear wheels turn in the opposite direction to the front wheels to improve maneuverability and in the same order. In this case, the pickup can move sideways – such mode is called “CrabWalk.” 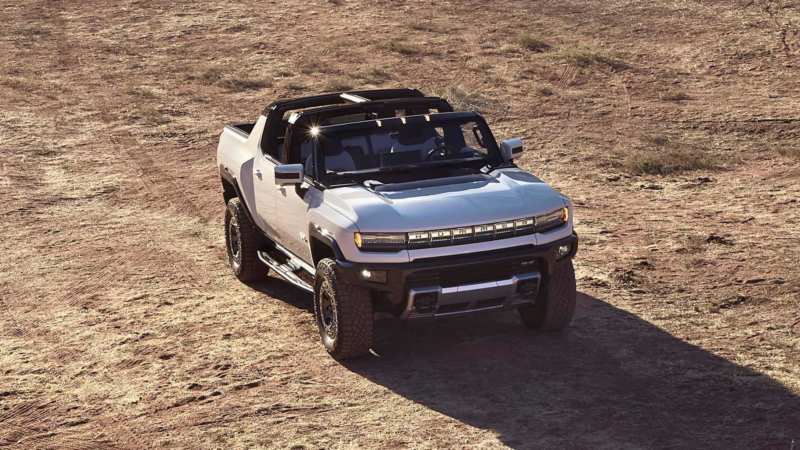 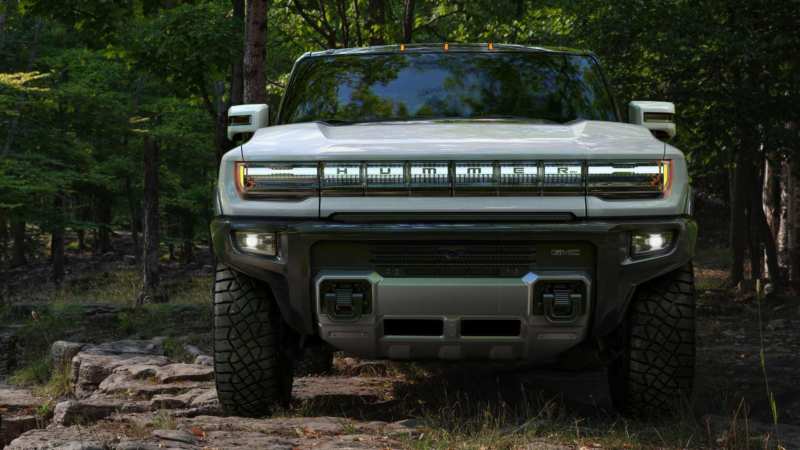 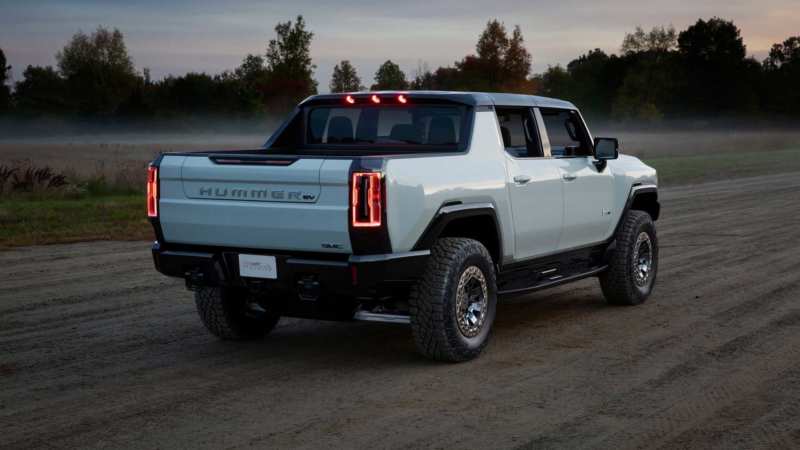 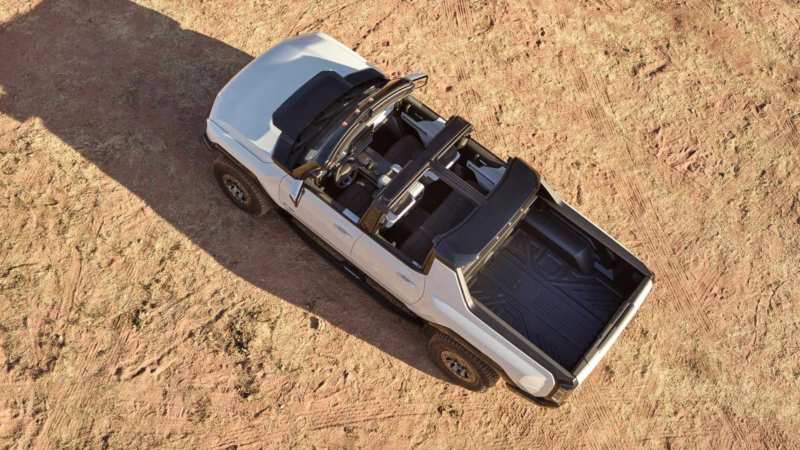 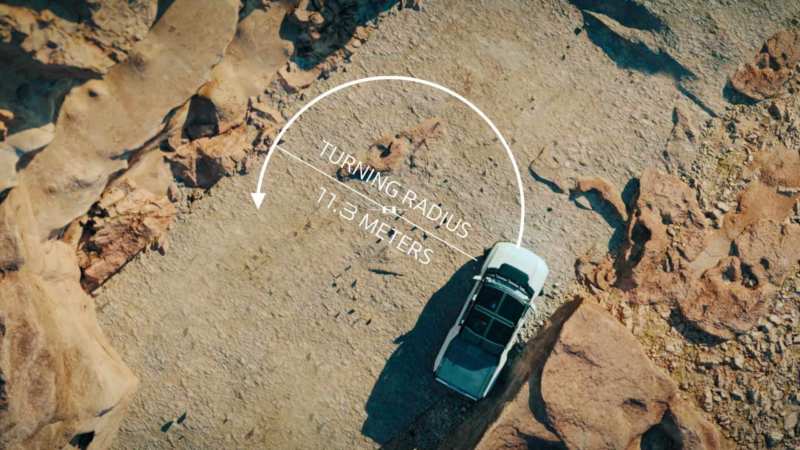 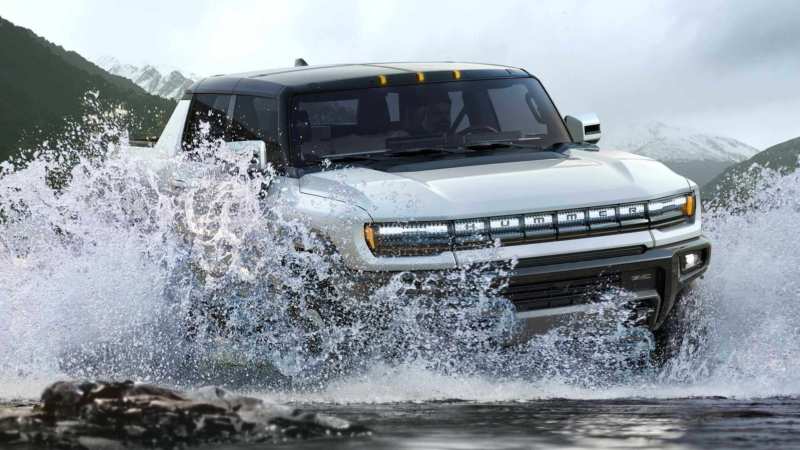 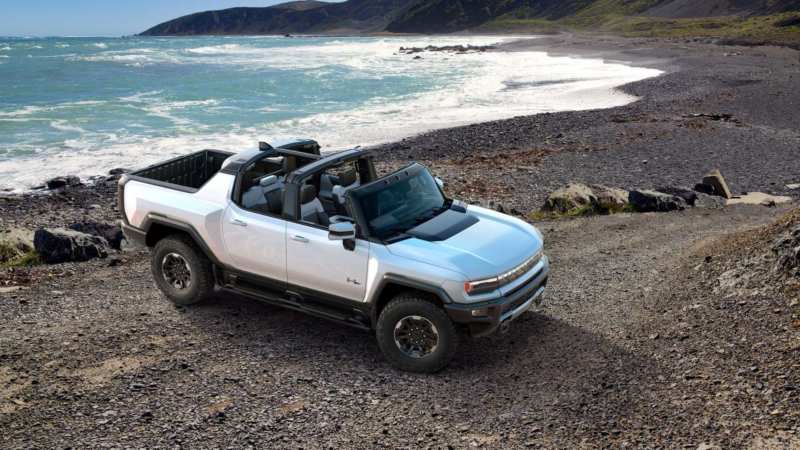 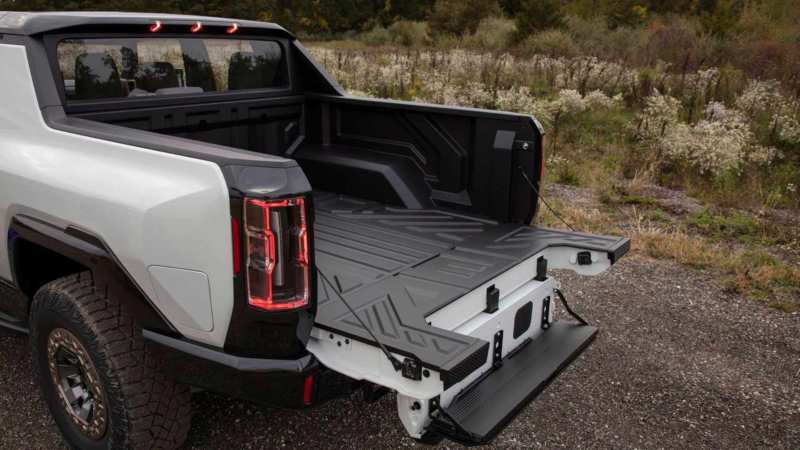 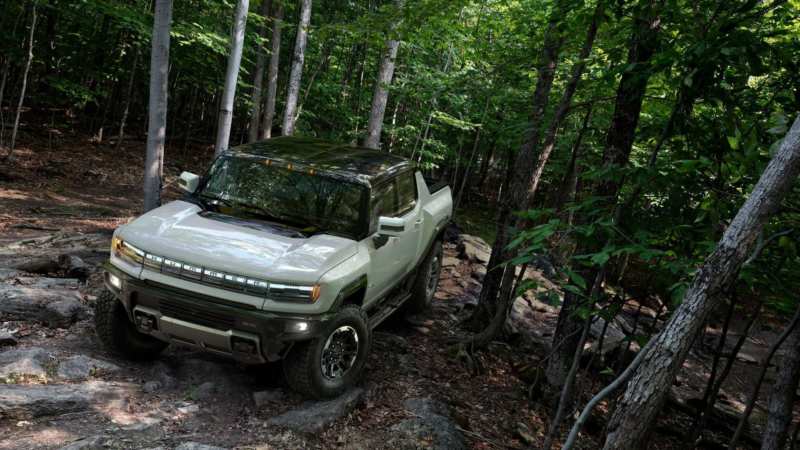 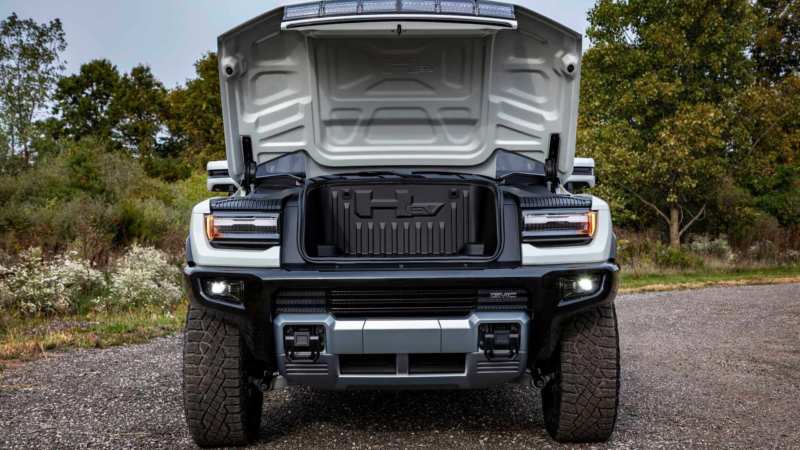