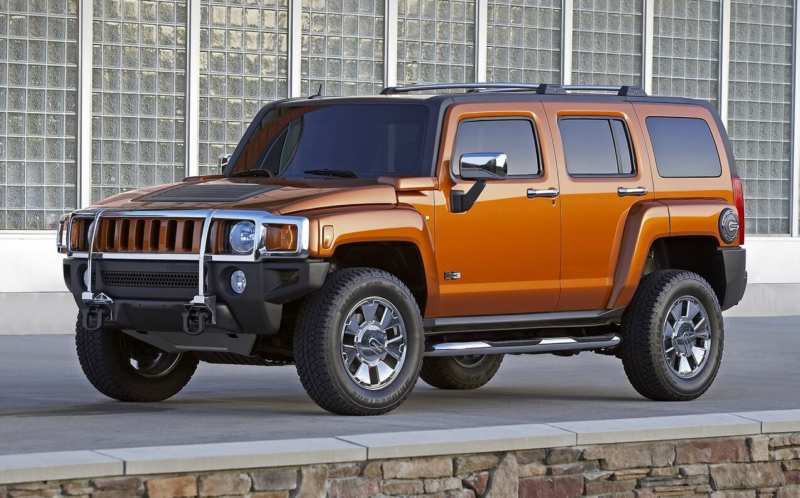 Hummer H3 is a military-style Hummer SUV. This vehicle was presented in America in 2004, and has been produced since 2005. The whole model range is Hummer.

This compact SUV was built on the same platform as the Chevrolet Colorado. The H3 Hammer has an original truck body, replacing the traditional closed body. The design is still strict and has a military appearance, which makes this car not to be confused with anything else. H3 Hammer looks quite good on H2, but has a smaller volume of chrome-plated decor and smaller dimensions.

The front part of the car did not become some unexpected surprise, because here you can still see the 100% Hummer, the usual cuts in the vertical grille, two round headlights and installed in the front bumper pair of fog lights. It seems that the car has become more flat visually, but this to some extent justifies the fact that it has lowered the height of as much as 165 mm. 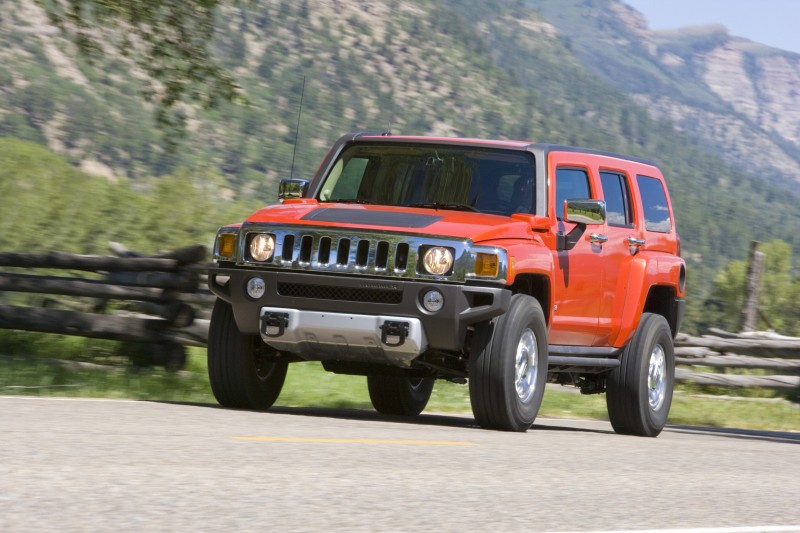 There is also a large radiator grille, which shines, a massive bumper, but already made of plastic. Interestingly, there are even four fish, two on each side, and if desired, you can hook a tank rope. Immediately in the eye catches a huge hood, which can be opened only as a standard car. Here, too, there are large doors, along with the windows and loopholes. On the side you can see the wheels with a radius of 16 inches, which are very similar in appearance to those installed on the H2. However, there are differences in the “third” version, they took them out of the interior and covered with strong wings. 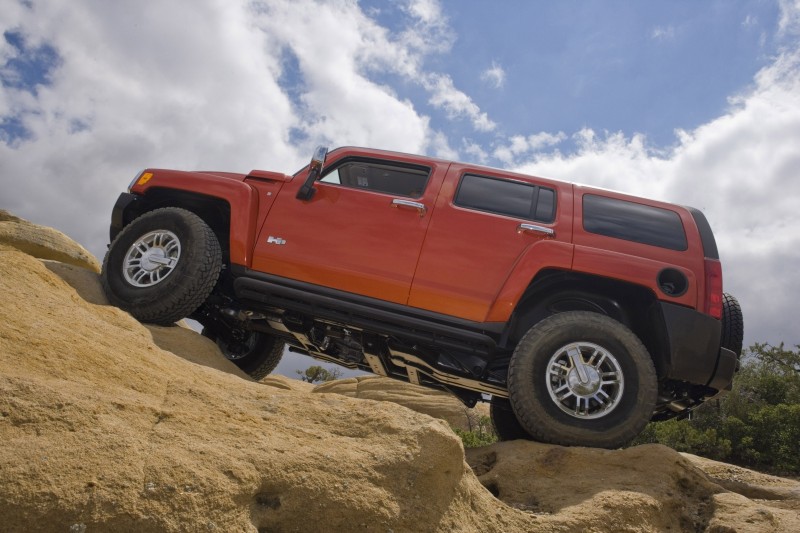 The stock has moved to the 5th back door and now does not take away half of the free luggage space, as in the second Humvee. The stern is perfectly combined with its own lines and chopped forms, as well as deflectors on the arches, which are made very brutally. If we talk about the taillights, they are very similar to Discovery 3 and Nissan Patrol GR. They all have rectangular lanterns. Speaking in general, the car looks impressive and as before, harsh.

The interior of the H3 has five seats and a high level of equipment. When finishing the interior of the off-road car Hummer H3, only the highest class materials were used, which can include soft plastic, decorative inserts made of metal and leather. The front panel was designed quite simply, which in turn provided the opportunity to independently tuning the interior, which in principle always distinguished Hammer from other cars.

Of course, the H3 does not have such a huge luggage compartment as older models. Nevertheless, it is able to offer 835 liters of free space, and if necessary, it is possible to fold the rear row of seats, which will increase the free space up to 1,577 liters of usable space. 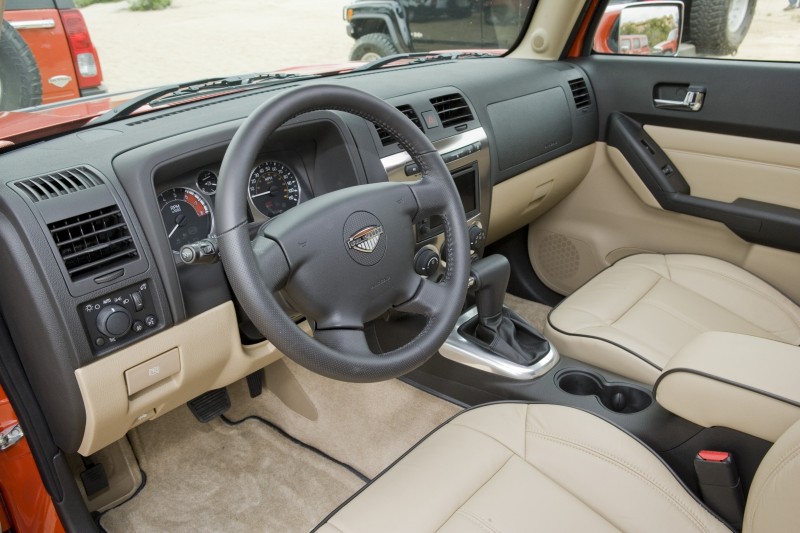 The year 2008 provided the H3 with a small restyling where the exterior of the off-road vehicle was slightly retouched and the salon was improved. Moreover, the list of optional equipment was increased, for example, a rear-view camera and a system for entertainment of passengers who were in the rear row of seats. The third edition of the Hummer H3 made it possible to significantly change its interior.

The functionality and simplicity of the very first generation remained the same. A large number of different indicators on the dashboard were replaced by a strict 4-ring list in front of the driver. Many can easily understand what will be shown in them. The speed and speed sensor of the power unit, as well as the temperature sensor and fuel level indicator are striking. 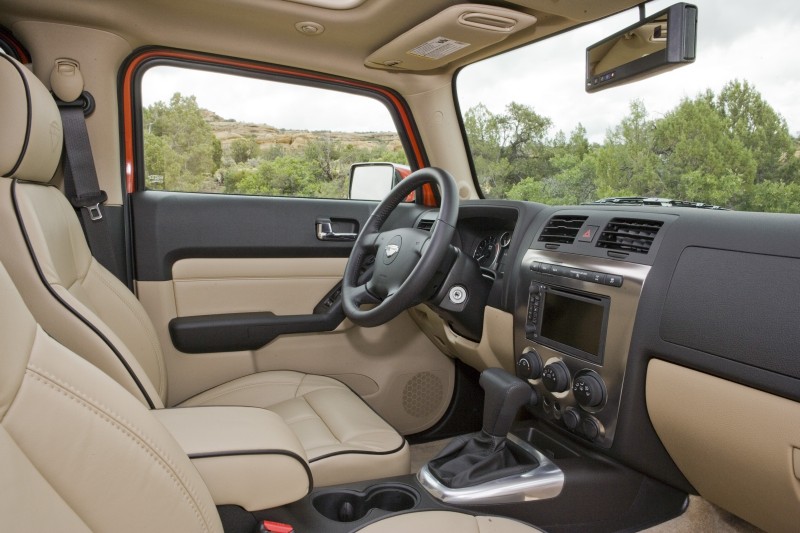 It is clear that the comfort in the interior of Hammer has increased, not paying attention to the fact that it has decreased in size. This direction can be felt not only in the finishing and elements, but also in the appearance. The steering wheel turned out to be more rounded and it was equipped with H3 nameplate. Already known, as if “pokerga” gearshift handles could lead to a pleasant appearance, which in principle, can be a little upset the adherents of the company, because the car in a sense lost its individuality. Everything is quite clear on the console located in the center.

The upper part has several functional buttons, and below them there is a CD-cassette recorder, and at the very bottom there are temperature regulators in the car interior. Even the longest trip will bring joy and pleasure, if you feel the comfort of the interior, for this purpose, optionally available for Hammer seats are leather with the function of heating, a large hatch in the roof with a servo, DVD-“navigator” and a large number of additional devices designed to ensure uniqueness of the SUV and comfort to the driver and passengers sitting next door.

This monster has a 3.5-liter engine (223 hp) with five cylinders, equipped with a turbocharger. The gearbox is a four-speed automatic or five-speed mechanics. For sale in Europe, a three-liter turbodiesel R4 CR with a power of 130 horsepower is installed. According to the classification of H3 Hammer is a medium size with good cross-country ability of the jeep. It is based on a steel and sturdy frame, independent front suspension and dependent rear spring, ABS with disc brakes for all wheels, reduction gear and rear self-locking differential.

The Hummer H3 Alpha version has a 5.3-litre V8 engine with 305 horsepower. The large weight and dimensions of the engine did not affect its off-road capability. The chassis and suspension were upgraded here. The steering was reconfigured and reinforced all-wheel drive transmission. The standard all-wheel-drive version of the Hummer H3 off-road vehicle has five seats and comes with a 3.7-litre gasoline powered five-cylinder engine that can deliver about 242 horsepower and is synchronized with a simple mechanical or hydromechanical 4-speed automatic transmission. 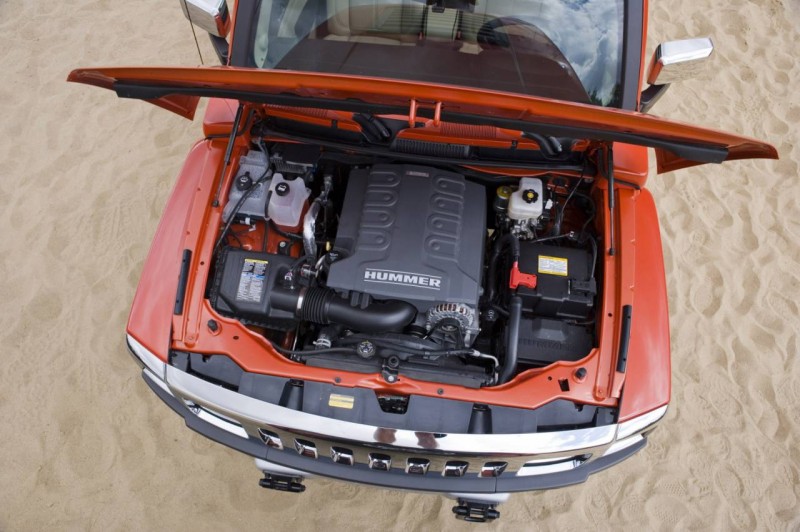 The suspension is not very comfortable, because of the use of a pickup base. The Hummer H3 Alpha basic equipment includes a dynamic stabilisation function and a traction control option. If navigation systems are installed, a rear-view camera can be installed as a separate option to provide maximum visibility when rear manoeuvring.

Off-road class vehicles are assembled not only in the United States of America, but also in the Republic of South Africa. However, as of 2010, production of the Hummer H3 vehicles had been halted. The car company has never sought to be a leader among horsepower. Often only a small number of engines were offered, but the technical stuffing was always tailored to the convenience and durability of the off-road vehicle.

In addition to the airbags, the machine is equipped with additional braking services and cruise control. In order to provide the necessary level of passenger safety, specialized sensors have been designed, which are capable of detecting children and disconnecting them when AirBag is needed. And they, in turn, provide “circular” protection in the event of an accident. The airbag can only be triggered when an adult passenger is sitting on the seat. If this does not happen, the airbag simply shuts down.

Machines with three complete sets – Base, Adventure, Luxe – will be supplied to the automotive market of the Russian Federation. Hammer’s basic equipment includes two airbags, ABS, Traction control, cruise control, front seat heating, leather interior upholstery, etc. Price policy of the most affordable Hummer H3 model has started from the mark of $25016,00. In addition, the SUV has an excellent air conditioner, which is able to function even in the hot desert, advanced settings of driver and passenger seats, a fairly good acoustic system. 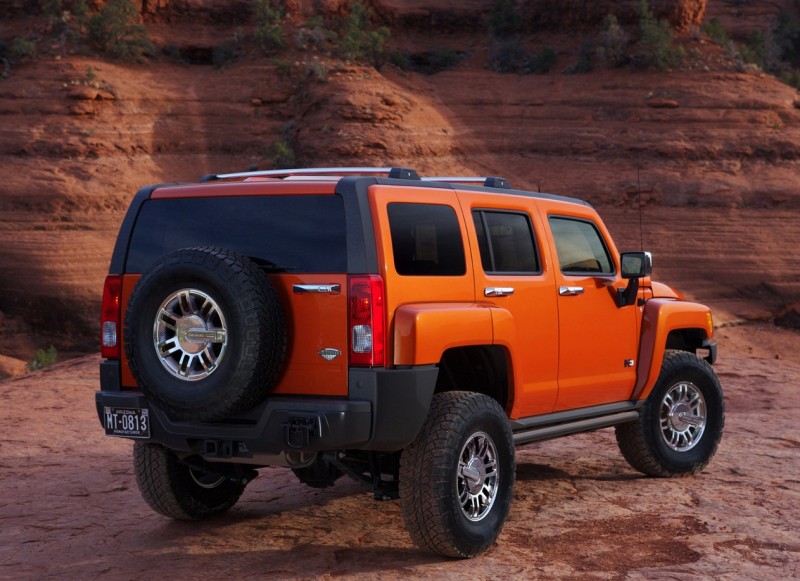 Summing up the results of off-road car Hummer H3, it is necessary to tell that in spite of the fact that it has slightly decreased in dimensions, it has not affected in any way its functionality, comfort in a salon and running characteristics. It became more modern. It is clear that this car is not suitable for daily trips in urban conditions, especially given its fuel consumption, which on average consumes from 12 to 18 liters per 100 km, depending on the equipment.

Rather, it is suitable for rough terrain, or off-road, as well as those who prefer to travel, which allows you to take all the necessary things with you – luggage compartment provides such an opportunity. Yes, its interior is far from perfect, and even though everything is dry and simple, as in army vehicles, but everything that is most needed is present in it. 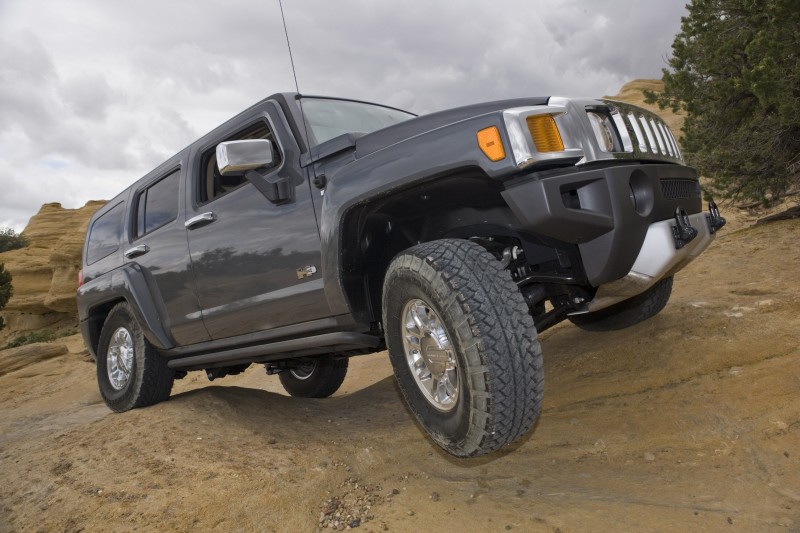 Different settings of driver’s and passenger seats, as well as their heating options made them happy. Thanks to the fact that the spare wheel moved to the back door, there is even more space. In general, it turned out to be a worthy receiver of the H2 series. It’s a pity that the production of the car was just suspended, but we could expect tangible changes in the car, which would allow it to be even better.

We advise you to read the article: History of Hummer 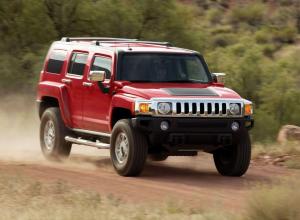 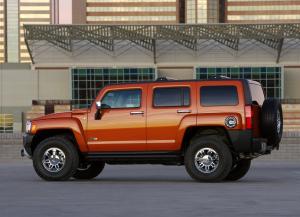 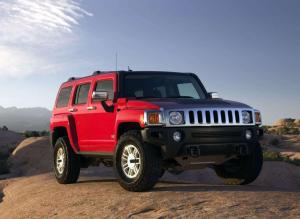 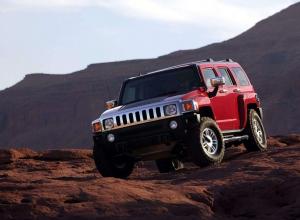 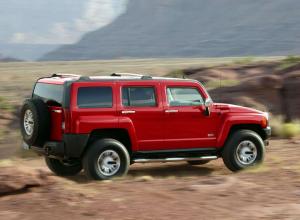 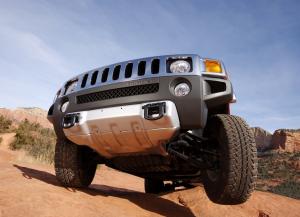 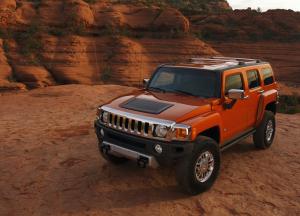 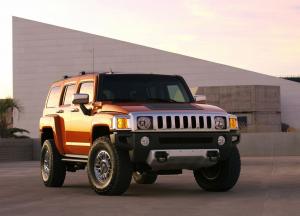 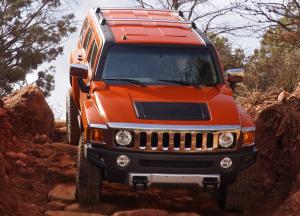