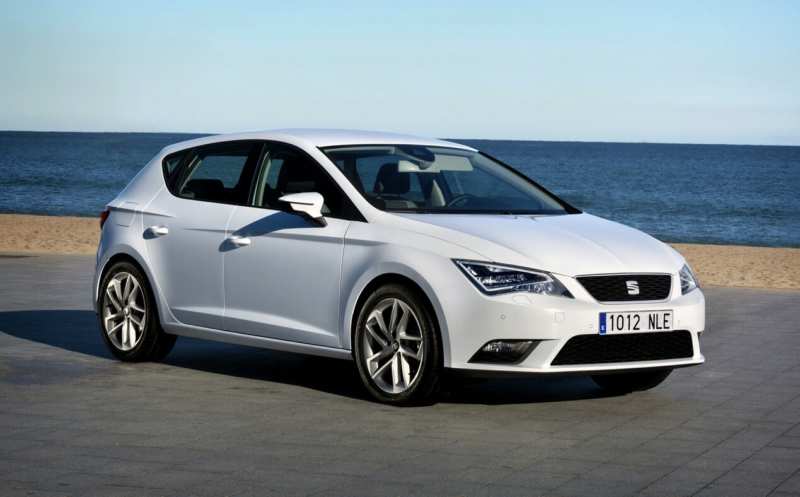 Seat Leon is a front-wheel-drive, upgraded class “c” hatchback. The latest restyled version of the Spanish model was released in autumn 2012, at the Paris exhibition. The first sample came out in 1998 and immediately attracted the attention of many motorists. In the core of the third generation of Seat Leon introduced a modular program MQB concern Volkswagen AG, on the basis of which have already been designed Audi A3, Volkswagen Golf 6 version and other machines.

According to the management of Seat, which is part of the Audi Brand Group, the machine was almost new. The new Spanish car with front drive is planned to be positioned as a city car for young families with children. In the Russian Federation, 3rd generation Seat Leon vehicles were launched in 2013. The whole model range is Seat.

The appearance of the new Leon in most cases is very similar to the exterior of the concept of Seat IBE, which was demonstrated in the autumn of 2010 at the Paris exhibition. In general, the machines manufactured in Spain use platforms, power units, units of German manufacture. Therefore, the updated Spanish hatchback was no exception. The nose part of the Spanish 3rd generation hatchback shows us the appearance, on which there is a presence of stylish headlights with all kinds of complex geometric shapes (optional filling of full-LED lamps, which means completely LED filling), sports bumper fairing, original mirrors of rear visibility.

The trapezoidal grille is reflected in the air inlet below, but it has a large size, which is clearly visible in the photos. All two ducts have been neatly covered with a patterned grid, as well as auxiliary sections, which are located on the edges of the bumpers, next to the fog lights. 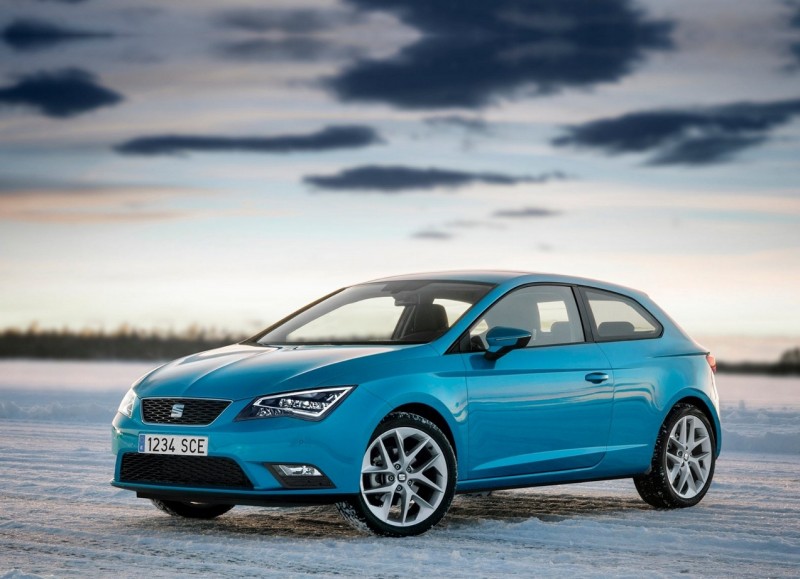 The front cowl is equipped with a protective lip at the bottom, which gives the car rigour and excitement. And in the modification Seat Leon FR – they look even more aggressive, because of more relief aerodynamic details, which are more pronounced. The side of the car from Spain, the 3rd generation Seat Leon has large wheel arches that can easily accommodate wheels from 16 to 19 inches, a pair of sharp ribs that outline the body.

The first one literally cuts through the side of the front wing, flows through the driver’s door with a strong stamping and fades through the center of the rear door. The second ones are “born” a little above the rear row door handle and create a scarp, rapidly leaving the rear of the car, repeating the line of rear lights.

If you look at the Spanish novelty from the side, you can almost immediately notice a heavily overwhelmed rack installed in front, and the roof seems to hint at the dome-shaped shape and flows into the rear window through the spoiler over the rear door. 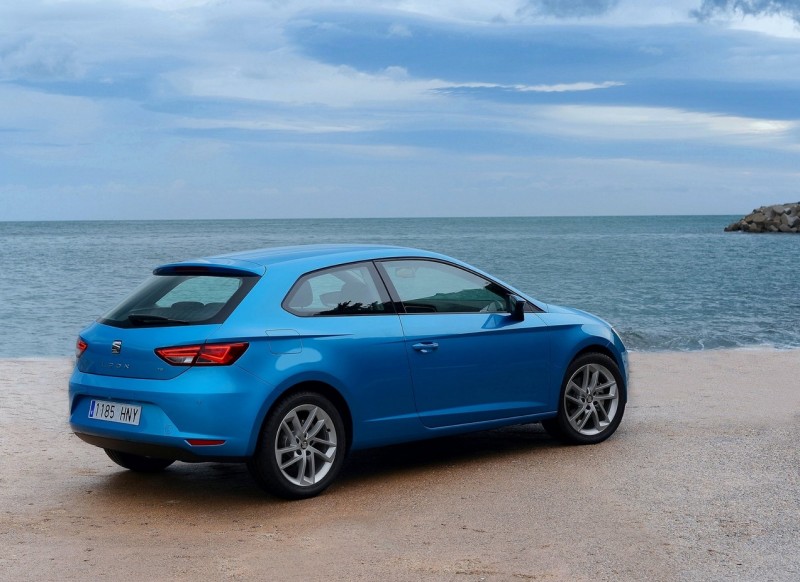 The window sill flows smoothly through the entire body of the machine and tends to soar up, creating a strong rear roof rack, which has a triangular shape. The stern of the Spanish car Seat Leon 3rd generation makes you fall in love with the presence of its own powerful reliefs, which are visible in the bumper, as well as with the help of beautiful narrowed blocks of parking lights (as a separate option you can buy a variant with an LED system), which with its elongated shape, make the car a little wider by eye.

In general, the fresh image of the Spaniard, only photos can have a significant impression of their own brightness of originality. The car looks no worse than Audi A3 of 2013. The engineering and design staff managed to create a body design after restyling, which gave more dynamism and sporty.

The body length of the Geat Leon hatchback is 4,263 mm, width 1,816 mm, height 1,459 mm. The wheelbase is 2,636 mm. The level of ground clearance is modest 140 mm, which may be lacking in principle, using this car in our area. Although it is clear that the Seat was created primarily not for the Russian roads, but for the European ones, where the level and quality of the road surface is much better.

The car has become more comfortable partly due to the wheelbase, which has grown in size. The interior of the updated Seat Leon 3 appears before the buyer very pleasant, finishing materials are of high quality, there is a verified ergonomics and rich filling. According to the detailed photos of the interior you can see a comfortable steering wheel, which has characteristic tides in the area of correct grip. By the way, the steering wheel itself has been adjusted on two planes.

The instrument panel has two large radii and an on-board computer screen, which is exactly the same as the new Audi A3. Everything is quite informative and stylish. The front torpedo and central console of the car has a strict, original architecture. Depends on what equipment will be provided, a 5-inch or 5.8-inch color touch screen will be installed in the cabin of the Spaniard. 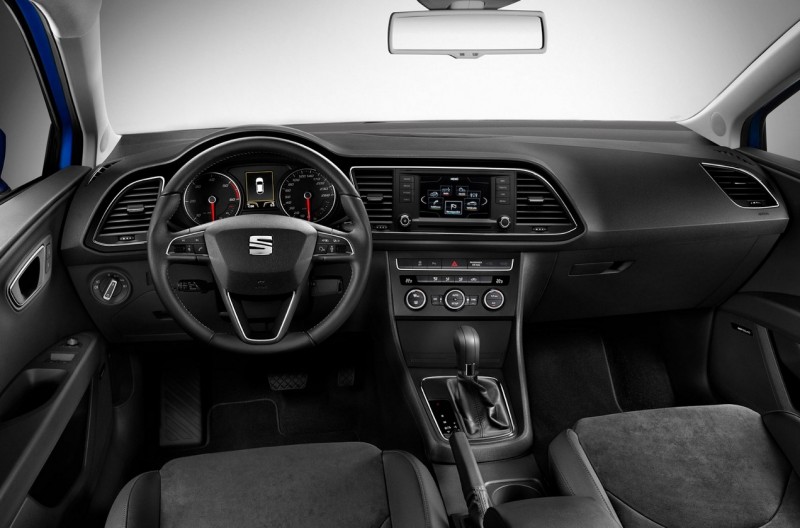 There will also be from 4 to 10 speakers, a music system that starts with a simple CD, MP3 and up to advanced with support for Bluetooth, USB, AUX, navigation system with voice control and rear view camera. Similar systems such as climate control, cruise control, self-parking, chauffeur control, lane departure signalling, automatic headlight switching can also be found in the new car Seat. The interior has seats on the front row with a large list of settings, and the form of seats is anatomical with a clearly expressed lateral support.

The second row can have two passengers in a comfortable room because of the fact that the pillow was designed for two people. The 3rd person has been given half the space, so it is not comfortable to sit there. The luggage compartment has 380 litres of usable space, which can be enlarged if necessary, but the rear seats can be folded down to provide 1210 litres of free space. 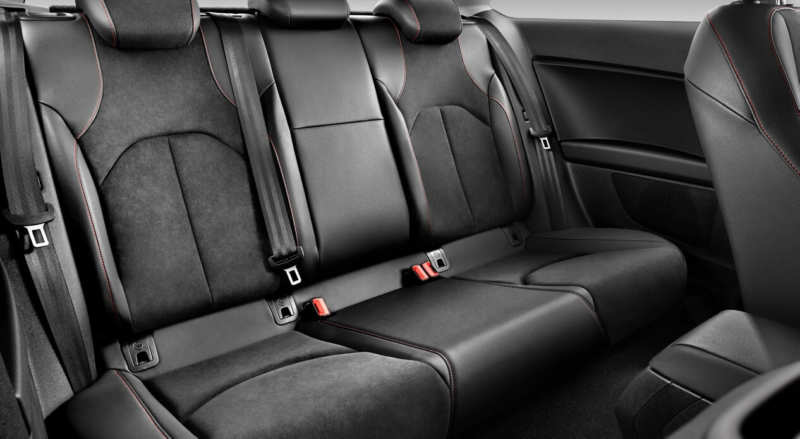 Speaking in general, the interior of the new Seat Leon 3 has become more strict and solid, the materials of interior finishing have been improved, the appearance of the panel installed in front has been completely changed, and the color display of information-entertainment system is located in the center.

Absolutely all Leon engines are equipped with direct fuel injection and a turbine. Technicians show a 22% reduction in fuel consumption. The consumption is about 8 liters per 100 km. On the road, the model will also continue to please the owner. Smooth running, clear controllability – all this is the result of modernization of the suspension. 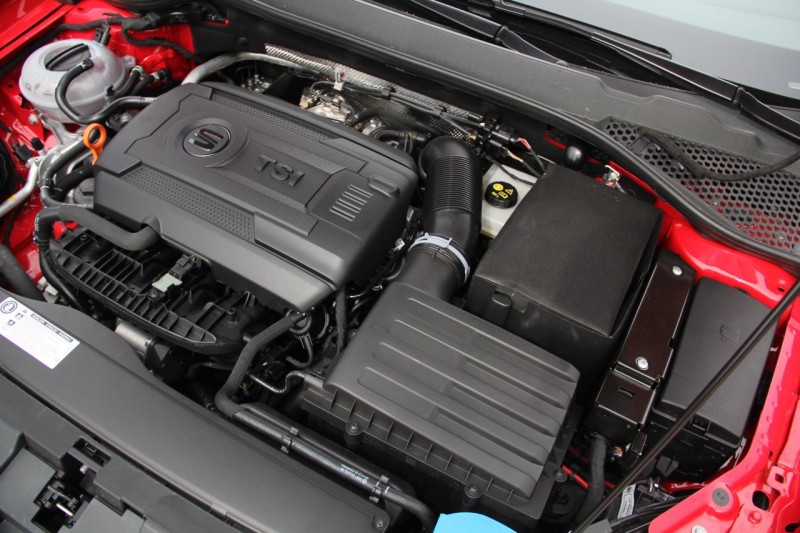 Ahead is the McPherson spring suspension, and at the back are the units that will be supplied with a torsion beam with the engine power of less than 150 forces, and more than 150 – with an independent multilever beam. Those car enthusiasts who think that the power units are not sharp, the company Seat has prepared real missiles in Spanish version, the power of which will be 265 and 280 horsepower.

Regardless of what kind of engine will be installed, the car Seat Leon 3 will reach the maximum speed in the interval from 180 to 220 km/h. The company will install the Start/Stop service and brake energy recovery. As the improved car has been designed on the basis of MQB, it shows its strong qualities, and on the other hand, its low weight and good maneuverability.

Seat Leon 3 – is the pride of the developers, because there is a presence of high-tech innovative stuffing. In addition to a large number of different engine management services, the new hatchback has additional unique technologies. For example, it is the presence of LED lighting, which is complemented by an intelligent system designed to eliminate dazzle oncoming traffic driver. There is a unique system Seat Drive Profile which is available in full modification.

It allows the driver to easily adjust the car to his own needs and habits, by pressing a few buttons to choose the desired sound of the engine, the sensitivity of the steering wheel and pedals, the level of illumination of the dashboard and the cabin. In addition, there is a system that knows how to determine the fatigue of the driver, a system that monitors traffic on the permitted lane and Start / Stop. 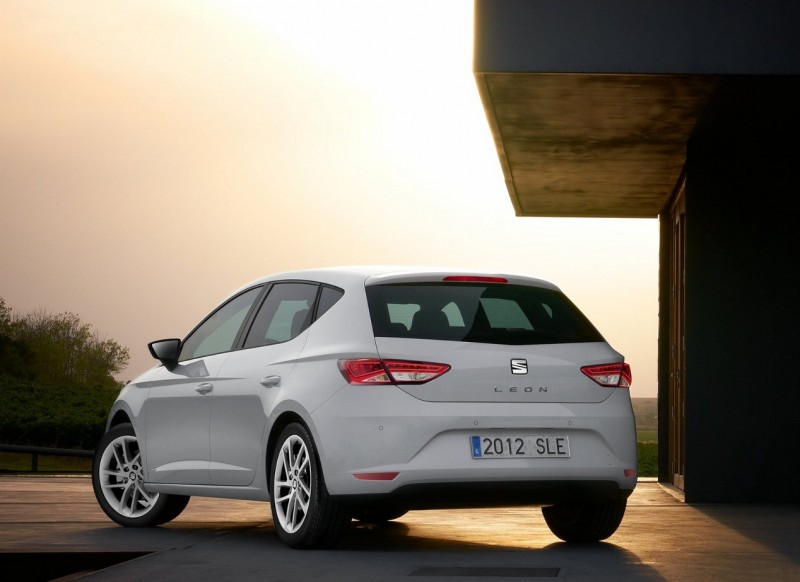 The cheapest complete set of the Spanish car Seat Leon 3 costs $9398,31. It includes the presence of 6 airbags, help in management (anti-skidding, anti-locking and service of course stability), but the system of audio and air conditioning is not in it. Still the standard equipment has 18-inch disks, optics with integrated LED lighting system, a package for the operation of the car in winter conditions, immobilizer, climate control, cruise control. Reference already includes a multimedia system with monochrome display, on-board computer, air conditioner and electric package.

Without a doubt, the updated Spanish car Seat Leon 3rd generation turned out to be really excellent! Its appearance is obviously inspiring and makes one’s eyes on it to be chained to it. The car has received a new, fresh look, which hangs thoughts about swiftness, dynamism. Leon will be suitable for young people as well, as he has a youthful style and wonderful punctuation on the sidewall. It is nice that the creators have already introduced a popular LED lighting system. Pleasant sensations after examining the appearance of Seat are not lost, after hitting the salon.

Everything is also fine here, sitting comfortably on comfortable seats, which have a pronounced side support. Materials from which many details of an interior have been made, became much better and more qualitatively. The instrument panel is quite simple and informative. It is not difficult to reach all controls, and a part of the central console was even slightly turned towards the driver in order to improve this moment. Ergonomics is at a high level. A touch-screen display was introduced. 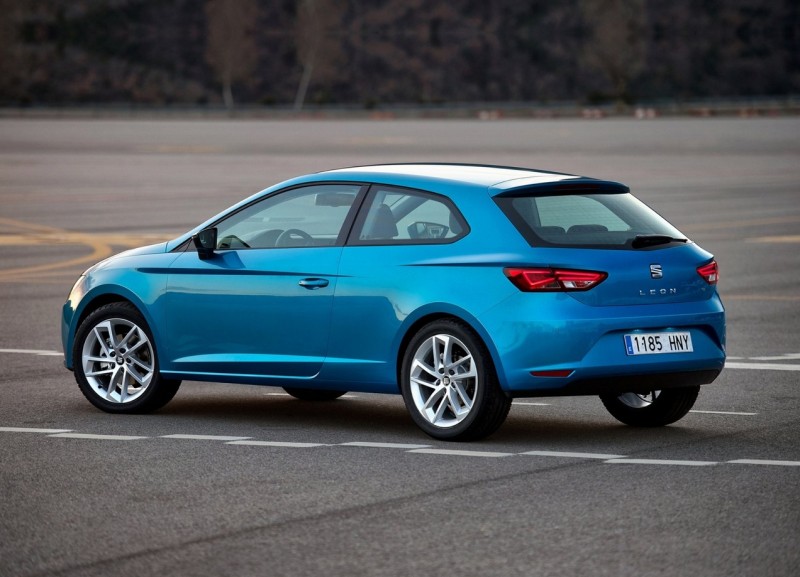 Only 2 people can fit in the back with comfort, as only the seats have been adjusted separately for them, but there is room for three. Taller passengers will not be crowded either in height or in knees. It was a pleasure to have a rather acceptable volume of luggage compartment, which can be increased if necessary. There is a wide choice of equipment, engines and gearboxes.

This car can not be called weak, so it will give you the opportunity to feel confident when driving uphill and overtaking. Paying attention to the capacity of the car, the Spaniards have not forgotten about safety, having equipped the hatchback with 6 pillows and various systems. We hope, the company will not stop on reached, then it not only will remain the former structure of admirers, but it will increase.

We advise you to read the article: Seat history 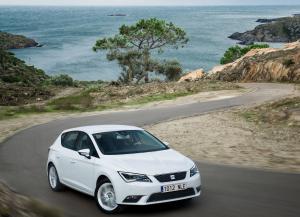 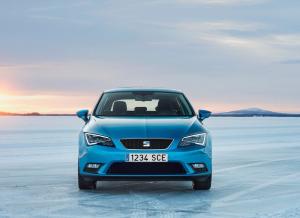 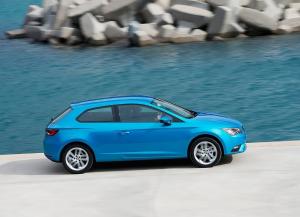 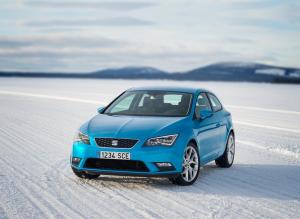 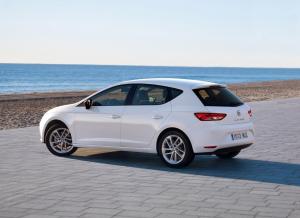 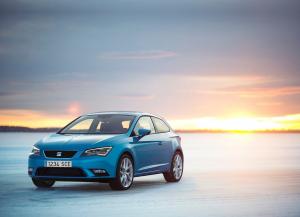 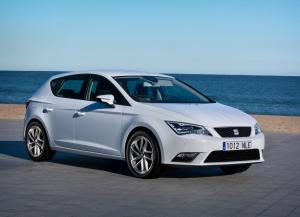 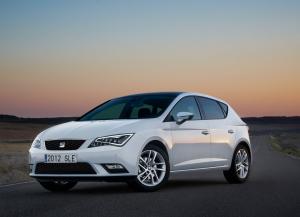 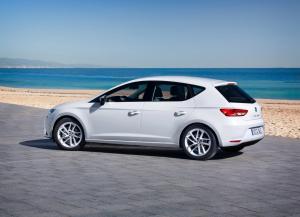