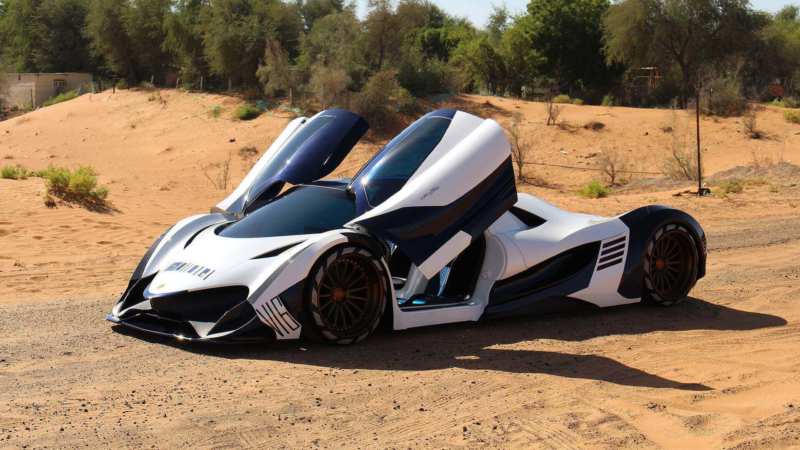 According to the developers, the car is a carbon fiber monocoque that is placed on an aluminum frame. However, it is not a surprise to anyone, because such a design is used for very fast cars. Thanks to it the necessary strength characteristics are provided with a significant weight reduction. Looking at the appearance, there is a feeling that the novelty is similar to “Batmobile”.

This can be seen in the streamlined shape of the cockpit, a little bit heavy and chopped edges of the body. In addition, you can see the rear exhaust system spigots, which are very similar to jet nozzles. Looking at the Devel Sixteen, there is also a similarity to a jet fighter, especially at the rear. At the front, there is an unusual triangular shape that transitions into a powerful splitter. 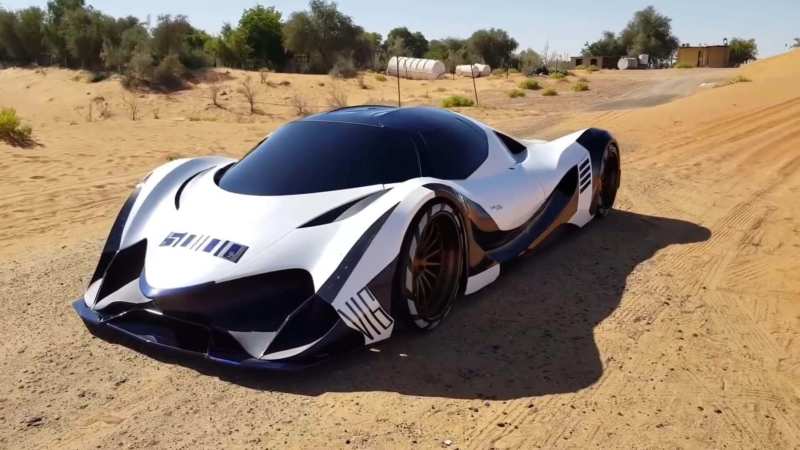 The side pillars have elongated headlights, elongated vertically and with a futuristic look. The stylish look is completed by a massive upper wing supported by three struts. If initially there is a feeling that you have an ultra-modern car in front of you, after a closer look you can understand that the Devil Sextin is a kind of “amateur counterfeit”, which has little in common with the products of Bugatti, Ferrari and Lamborghini brands.

Initially, some clumsiness of appearance catches the eye – details look very rough, in some degree even clumsy. The structure of a back antifender, which struts are fixed to the body with the help of some rivets, has surprised very much. Looking at such a thing, one begins to recollect Chinese car industry of the 1990s at once. Interestingly, at the 2017 Dubai Motor Show, a production version was shown that was stripped of the massive antifender. 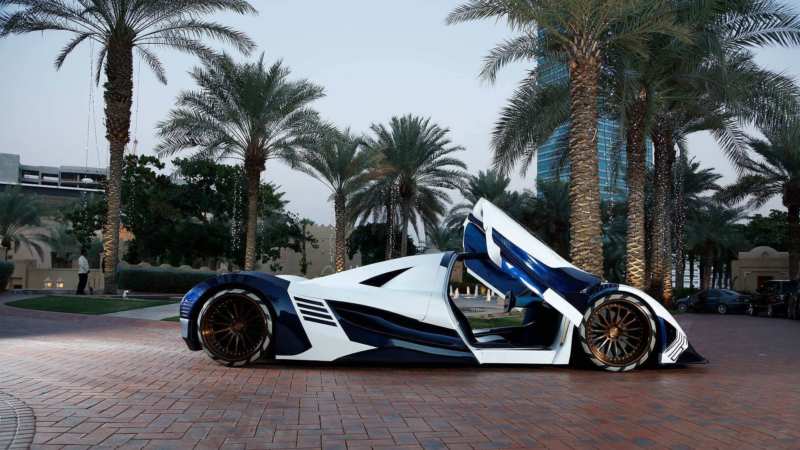 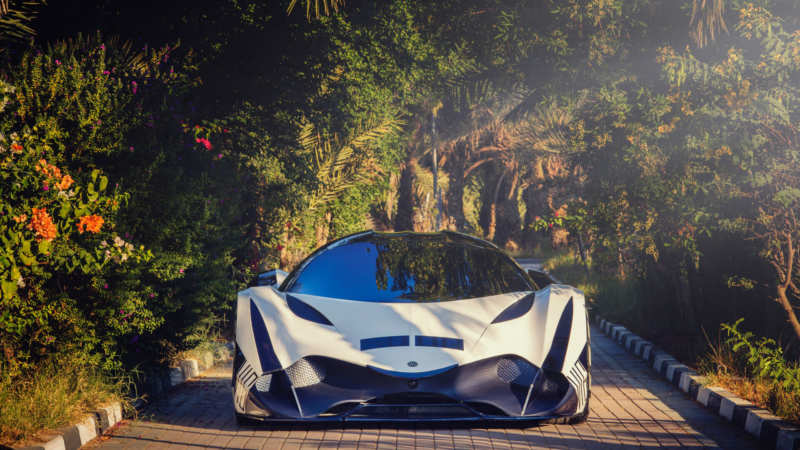 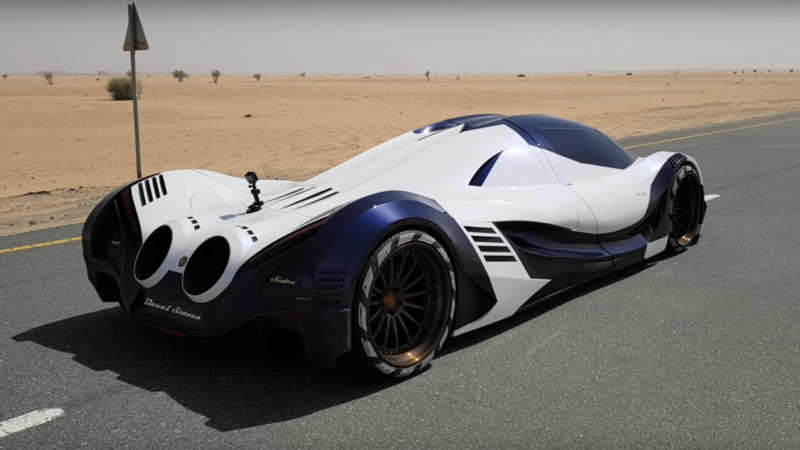 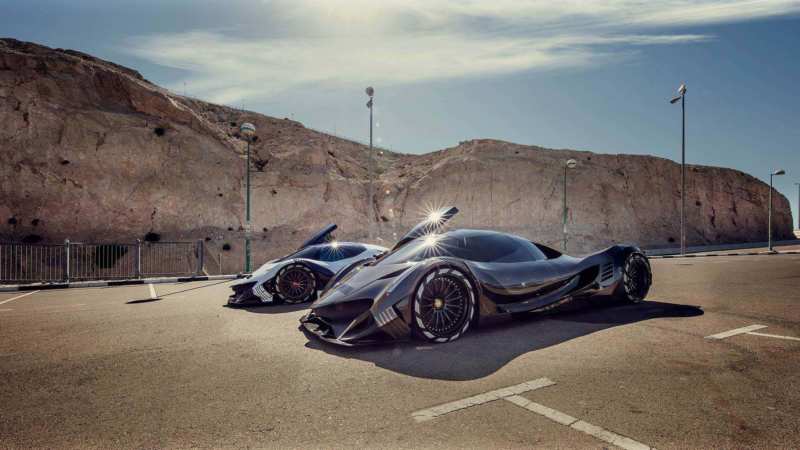 This can also be attributed to the front headlights, which have more of a decorative function than full-fledged optics. It seems as if the Devel Sixteen development department sought to take the best features from the fast vehicles of other manufacturers, such as the Pagani Zonda R or the McLaren P1.

In general, there are more flowing contours in the design of the car’s exterior. Engineers have changed the shape of the lights and the design of the “rollers”. The cabin, as before, is shifted forward, as if leaving room for a huge engine, which has amazing technical characteristics.

The concept model, shown in 2013, had luxury leather upholstery with inserts in the form of metal rings (which is very unusual), as well as a “mysterious” block with LED filling in the center console. When creating the floor it was decided to use leather with lozenge stitching. The front panel could boast of huge dials, due to what it seemed that you are not in a hypercar, but in a spaceship.

However, in the real version, the interior has been seriously changed towards minimalism. Set in the front panel has a look of a rectangular tablet, and the steering is represented by a compact “steering wheel” racing type, which has eight buttons of control. Unfortunately, there is no more information about the interior of the Devil Sextin. 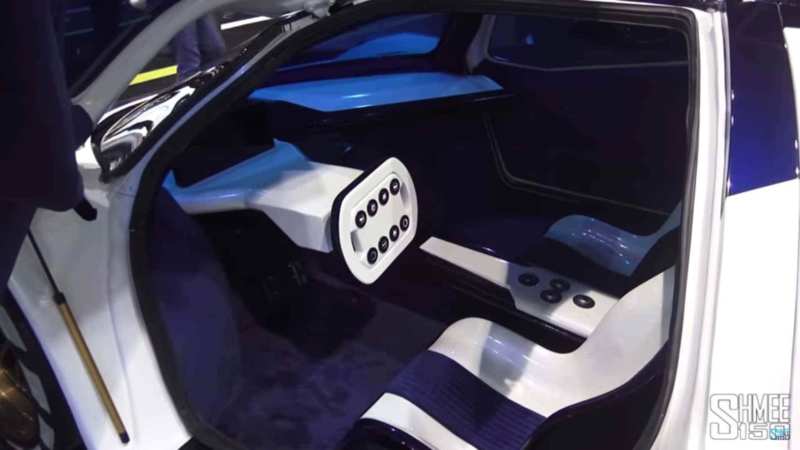 And here there is a lot to talk about. This is the part the company is proud of. The car boasts a gasoline V-shaped 16-cylinder 12.3-liter engine specially designed for the Devil Sixteen, which got four high-performance 81-millimeter turbochargers. There are also 32 valves inside the engine.

Just think about it – the working volume of each cylinder is almost 787 cubic centimeters. The power plant was developed by American company Steve Morris Engines. And we all know that Americans know a lot about powerful engines. The engineers of the company claim that the test bench allowed them to reach a power of 4,515 horsepower, which is the limit, limited by the dino system.

In general, the engineering team claims that the peak power of the Devel Sixteen’s power unit is 5,000 “horses”. It turns out that this hypercar from the UAE is the most “charged” car on Earth. Engineers just could not measure it, as they do not have the necessary test bench, which would withstand such power.

The torque of the power plant is 4,766 Nm, which should be more than enough for the hypercar. Such a motor should allow acceleration from a place to the first hundred in 1.8 seconds without any problems (according to assurances and calculations of the company). Maximum speed of the car should be about 560 kilometers per hour, which exceeds the rate of holding the palm superiority of the Bugatti Chiron.

However, despite the possible leading figures, it is too early to put the hypercar from Dubai there straight away as the car has not yet passed serious tests on the track.

There are some nuances that are not clear at all, for example, how the cooling system will work, because there is something to cool. Moreover, if you take into account the same Chiron, the engineers were forced to equip the car with twelve radiators to achieve stable operation of the power plant in different modes.

At the moment there is no information about the variant of the transmission, which will be installed in a sports car. But given such speed figures, the ideal option can be considered a pre-selective box with 2 clutches. With other gearboxes it will not be possible to achieve high reaction speeds.

The car has shock absorbers of variable stiffness, the function of changing the clearance, as well as three modes of control electronics. More precise information, unfortunately, is not available yet. In addition to versions with a top V16, engineers were able to adapt two more power units for the car. In the role of the initial version is a V-shaped 8-cylinder unit, generating 2,000 horsepower.

For it will have to pay not less than 1,600,000 dollars. Those who want to have a racing modification of the hypercar have raised the power up to 3,000 horsepower. This variant costs from $1,870,000. As the most extreme version is just the modification for 5 thousand “horses”, but it goes only for the track, and the cost is about 2 200 000 dollars. Interestingly, despite the rather unusual technical characteristics and potentially possible dynamics, the car from Dubai does not cost as much as its rivals.

There are not many cars today that could boast of such technical characteristics. Of course, as competitors of the Devel Sixteen, we can immediately include the French Bugatti Chiron, as well as Jesko Absolut Koenigsegg, which develops 531 km/h, Hennessey Venom F5. 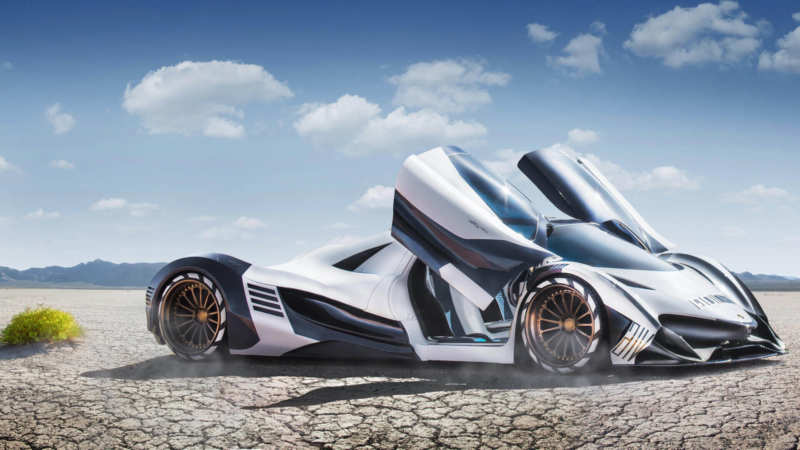 Despite the fact that the Devil Sextin has been made as close to marketable as possible, its interior is still being finalized. Although the company from Dumaya is optimistic, their car is still a long way from being mass-produced. But in general, we can confidently say that the company was able to attract attention to itself and cause a stir in the automotive world. Unusual appearance, as well as dynamic characteristics of the car is very impressive and promises a hypercar solid future, however, until there were even serious tests, it is too early to talk about it. Let’s see how Devel Sixteen will develop further. 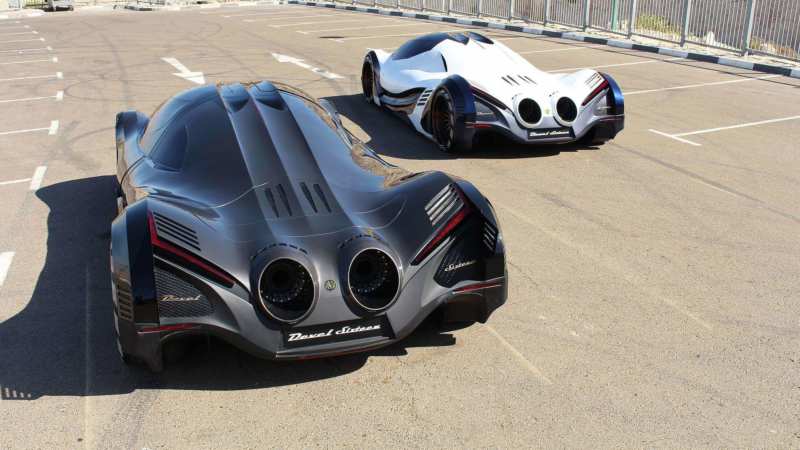